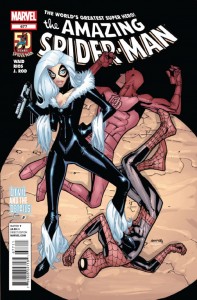 Before I discuss these two issues proper, just a few comic book logistical things to get off my chest:

The premise behind a comic book “crossover” it certainly not new or uncommon, but I have to admit that since Brand New Day picked up a few years ago and Marvel decided to launch multiple issues of ASM in a given month, I’ve enjoyed being able to read all of the “important” Spider-Man storylines in one title. Yes, I understand that Spider-Man appears in the Avengers, New Avengers, and more recently the Fantastic Four (or FF), but since you already know how I feel about how Spidey is utilized in those series, for argument’s sake let’s just agree that the bulk of the storylines that critically impact the development of Peter Parker and Spider-Man appear in the pages of Amazing Spider-Man. Only the most die-hard comic book fans will say Spider-Man lurking in the background and cracking a joke at Hawkeye’s expense in Avengers actually has any real bearing on the character.

When I was younger and there were multiple Spider-Man titles going on simultaneously – Spectacular Spider-Man, Web of Spider-Man, Spider-Man, et al, I used to hate it when a storyline would cross over into all of these series. It’s not that I didn’t like reading about Spider-Man, but in many instances, these comics were coming out on a weekly basis and I didn’t have the stamina or the vehicle to get to my local comic book shop every week to catch up on the next chapter. Meanwhile, if I happened to miss one of these chapters or purchased/read them out of order, I was left scratching my head trying to figure out what’s going on. While this may sound like a cop-out, the oversaturation of Spider-Man titles and the fact that they kept crossing over with each other was one of the main reasons I gave up on ASM and comics in general in high school. I didn’t have the money to buy 4-5 new comic books every month, plus back issues to pad my collection of “older” comic books. Considering this break of mine coincided with a period many consider to be the lowest for Spidey and Marvel, I guess I chose wisely. 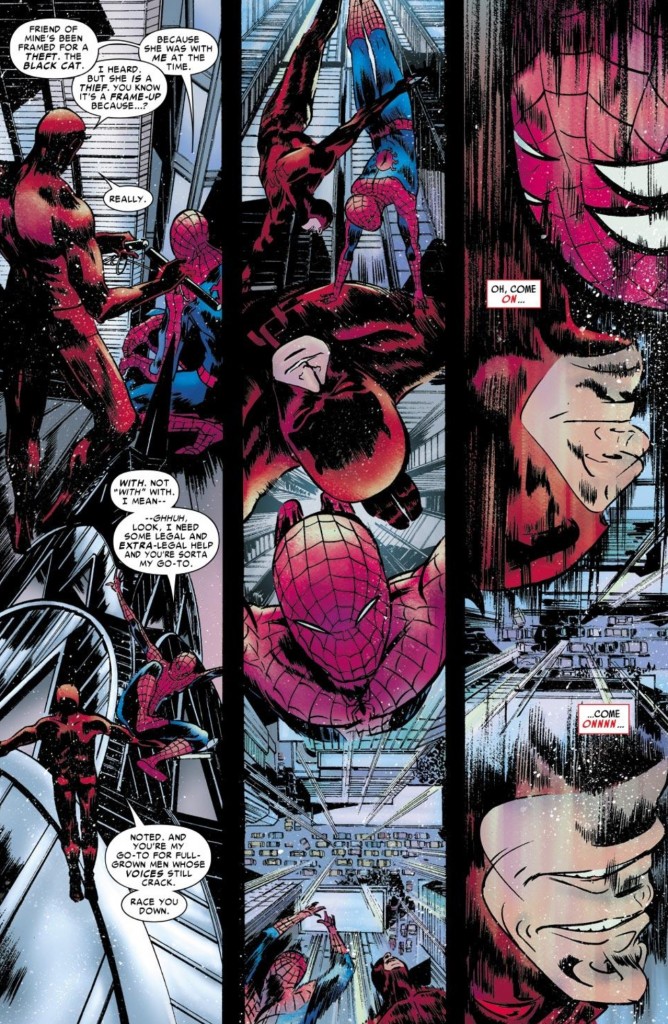 As I got older and interested in comic books again and I decided to go the subscription route for ASM, I realized I was missing vital parts of storylines like “The Other” because I didn’t have the time to get to my local comic book shop (which are fewer and further between now) to pick up the newest copies of series like Sensational Spider-Man and Friendly Neighborhood Spider-Man. What can I say? I was working 12 hours a day when you include commute time and the nearest comic book shop to me was a 20 minute drive from my parent’s house.  Unlike my teen years, I just kept plowing forward with the ASM since by that point I was invested more in the “quest” of owning every issue of ASM than actually being completely in the loop as to everything that was going on in Spidey’s world.

My situation today has improved somewhat in that a very large comic book shop is just a few blocks away from my current office, and with an hour or so to kill on my lunch breaks, I can now saunter over there on Wednesdays and stay on top of new releases and the occasional crossover. That’s not to say that I still wasn’t a big ticked-off by the fact that the storyline introduced in ASM #677 was part of a Daredevil crossover that was concluded in an issue of Daredevil #8. Obviously I’m annoyed enough to dedicate nearly an entire post rehashing my history of grievances with crossovers. 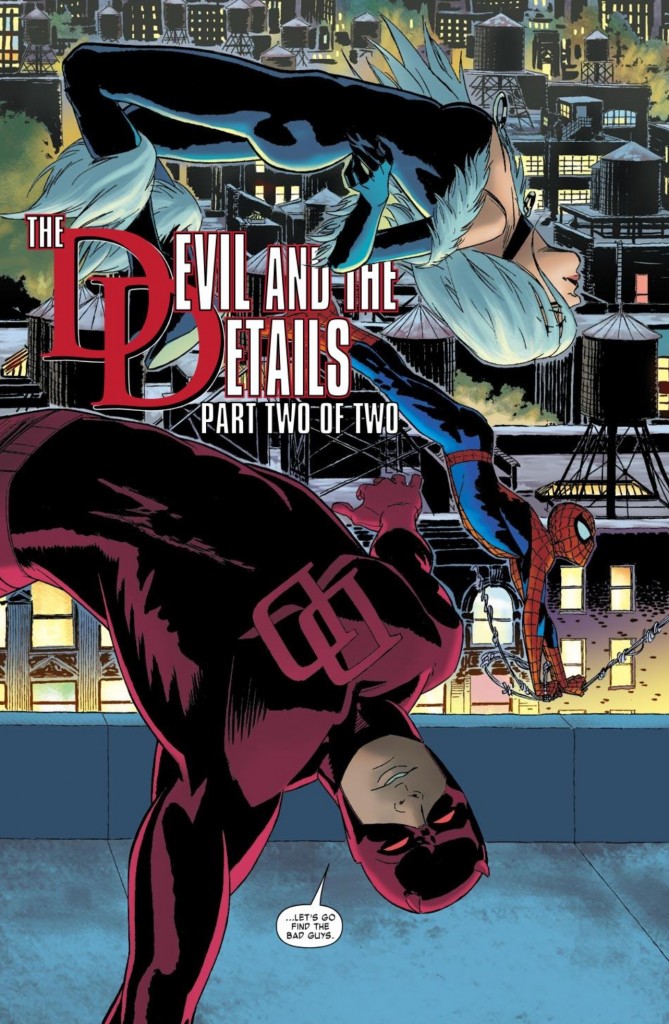 While there was a lot of cross-promotion with the Spider Island storyline this past summer, that felt different since most of the storylines outside of ASM felt very self-contained. I wasn’t going to miss anything truly critical in Spider-Man’s world if I didn’t get a chance to buy Herc #8 the week it came out. With ASM #677 that was not the case. The story ends on a major cliffhanger and without the second part found in Daredevil, a major mystery surrounding a character Peter works with at Horizon Labs would have gone unresolved for me.

But it’s not all piss and vinegar from me today. On the plus side, this two-issue crossover brought the fantastic Mark Waid back into my life. Waid, who had spent some time during Brand New Day writing some issues of ASM, is the probably the best you can ask for if current ASM writer Dan Slott needs a rest for a few issues. Of course Waid is rocking it hard on Daredevil right now – after hearing all the praised being heaped on the series, I recently picked up the collected hardcover edition of the first six issues and let me say, after years of essentially ignoring the character, I may be a Daredevil reader going forward. But beyond Waid’s fast-paced storytelling style, he’s just a guy that clearly “gets” and understands Spider-Man. Just compare this two issue run with Christos Gage’s guest-spot on ASM last year, which tied-in the Avengers Academy. The whole thing felt more like a push to get people to read AA than to do anything special with Spider-Man.  And as I noted at the time, the drama was also forced. Waid’s Spider-Man story just flows – so much so that when I got to the end of Daredevil #8, which seemingly sets up what’s going to be the next major storyline in Matt Murdock’s world – I truthfully forgot that I was reading a Daredevil comic rather than an issue of ASM. 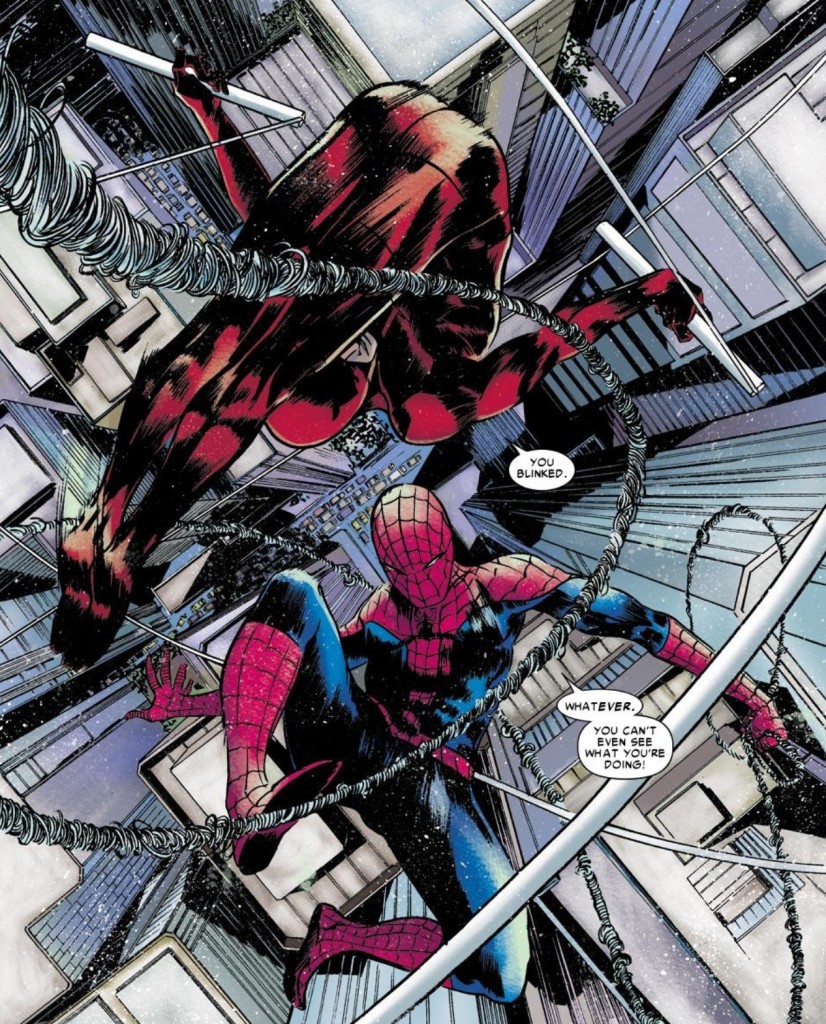 There was just a lot of little things to like about this storyline – Spider-Man and Daredevil just have a way of working well together in a comic book story, probably because both characters have suffered a tremendous amount of loss in their lives, yet, at least with Waid at the helm, both have a sarcastic sense of humor to balance out the dark and stormy moodiness. Bringing the Black Cat back as Spidey’s wishful-thinking booty-call is just a nice hat-tip back to the history of the character and also shows her evolution from someone who essentially throws herself at Spider-Man when she was first introduced in the 70s and 80s, to someone who flatly rejects his advances after seeing through Spidey’s horn-dogginess. 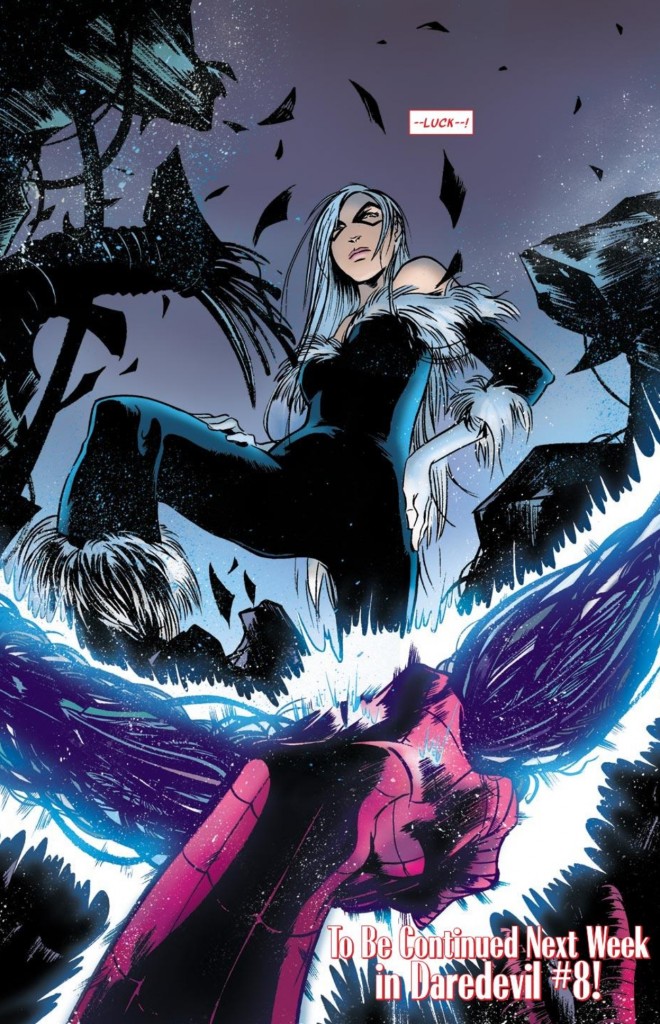 Add into the mix a little more insight into the kinds of inventions and technology being developed at Peter’s workplace, Horizon Labs, and you have a fun little two-issue diversion that gives Slott the break he needs to gear up for another busy spring and summer of storylines.

Does this mean my stance on crossovers has changed? Not really. At the end of the day, I still understand this was a ploy to get non-Daredevil buyers to purchase a copy of Daredevil and give it a chance, and while I respect Marvel’s prerogative to market itself and all of its intellectual property, this storyline only gets a pass from me because it was done by a very talented writer who has a history working on Spider-Man. Perhaps if Marvel had such strong writing throughout its crossovers in the 1990s, I wouldn’t be worked up into a such a lather these days when I think about having to buy additional comic books beyond my expected weekly reading.