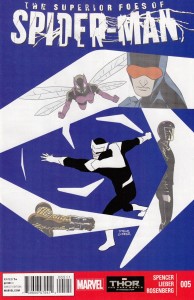 If that last paragraph sounds a bit too much like everyone’s favorite unreliable narrator, Fred “Boomerang” Myers, then I apologize (or I don’t… this guy, am I right?).

In all seriousness, Superior Foes of Spider-Man is elevated by the fact that there’s actually a plot to talk about in this comic book. The cutsie-cutsie Boomerang-isms that littered the first four issues of this series are all well and good, but I was starting to question whether or not this series had places to go once the scatological sense of humor was stripped away. Superior Foes #5 is unquestionably the most plot-heavy story in the series’ short history. Boomerang and his crew are FINALLY breaking into the Owl’s underworld fortress to steal the disembodied head of Silvermane (except, via unreliable Fred, we learn that Silvermane’s head is not the actual prize and instead it’s a painting of an unmasked Doctor Doom). Once the crew has successfully infiltrated Owl’s hideout, we get a number of action sequences, including some that involve giant scorpions. The pacing is fast, and by the time we get to the end of the issue, there are a number of lingering unanswered questions that are sure to kick off the next five issues of the series. 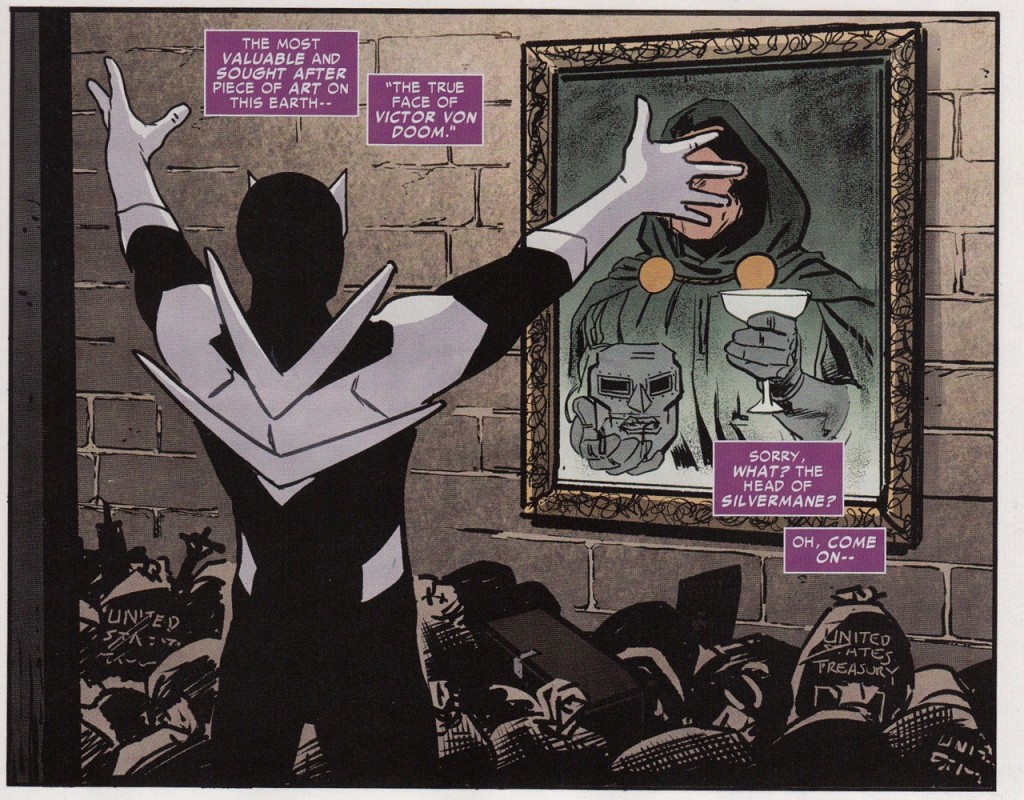 Despite the issue’s plot heavy-ness, Spencer and Lieber still work in their monthly quota of absurd jokes and great character moments. Having Boomerang use the elevator while everyone else in the Sinister Six fights their way through the Owl’s madhouse, is a funny plot twist that also further exposes the character as a totally self-centered yutz. Shocker’s “stay in school/don’t do drugs” exchange with the worried kid after he emerges from the locked trunk of Boomerang’s car is a legitimate laugh out loud moment for me, as is the comic’s final image of a discombobulated Shocker finding Silvermane’s head and breaking into a dead sprint. 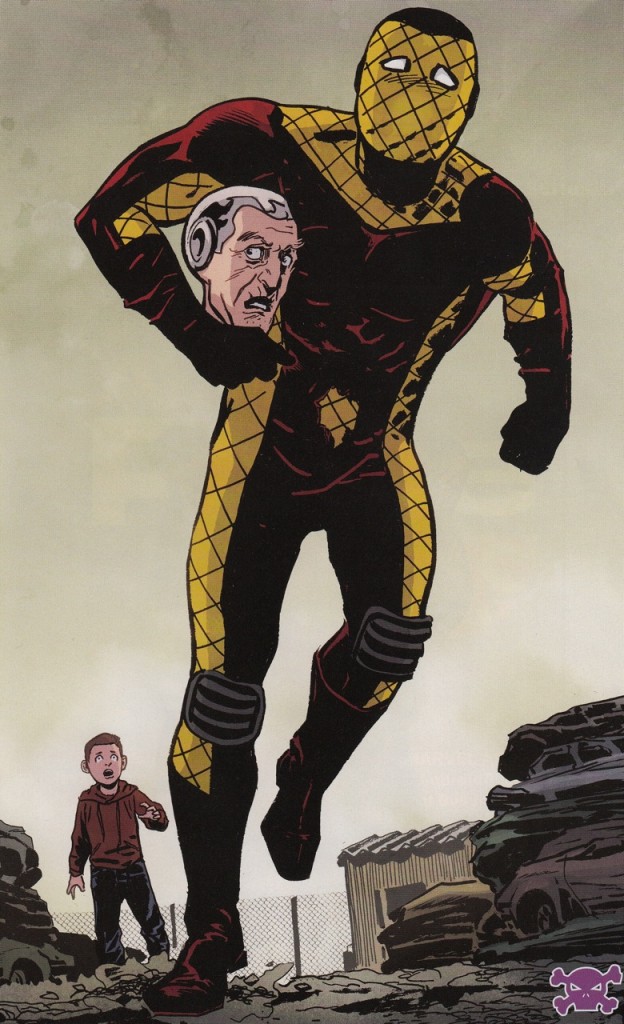 Lieber, who gets a lot of warranted credit for his creative page layouts, deserves praise for being able to take a character like Shocker – who wears a mask that covers his entire face – and visually present his body language in a way that’s incredibly expressive. The Spider-Man historian in me has been a little resistant to the idea that Shocker is such a coward, but that visual of Shocker looking both terrified and like something has FINALLY broken right for him once he grabs that old man’s head, is (almost) worth the character retcon.

Superior Foes #5 also manages to spread the love amongst all the title’s characters. Even Overdrive gets his first moment to shine when he flies a tricked out model helicopter into the Owl’s HQ. Boomerang continues to have the last (funny) word on everything in each issue, but it’s clear that Spencer and Lieber are grooming a storyline involving the new Beetle given how she’s been consistently portrayed for the past three issues as the only competent and intelligent member of the Sinister Six. Yes, her efficiency is played for laughs in this group when she presents them with a “color coded” plan of attack at for the Owl’s lair, but given her rise to prominence in this series, she’s the only active member of the Sinister Six that I would love to see take on Spider-Man (Superior or otherwise) in the main title. Plus, you can never have enough well-crafted female characters that are not “women in refrigerators” in the world of comic books. 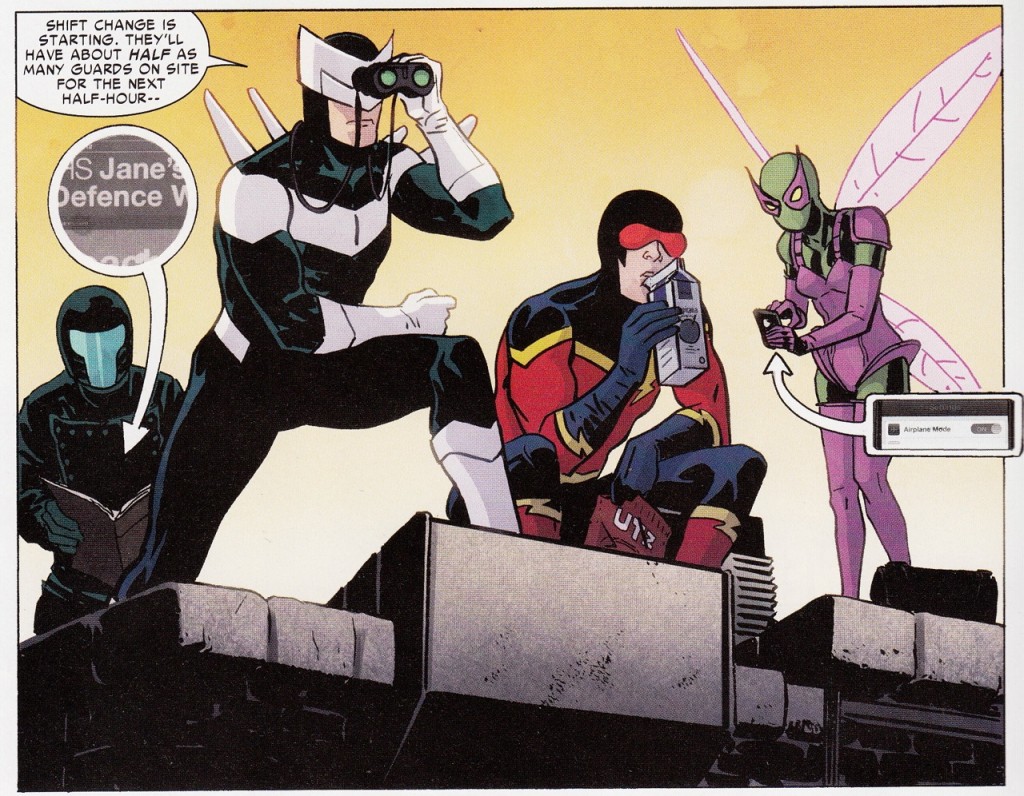 The constant bait and switches courtesy of Boomerang’s narration can sometimes be a little frustrating, but the wacky tone of this series is presented with such precision and consistency, I’m AOK with looking past the obvious caveats that come with unreliable storytellers. The fact remains that for the first time since I lavished a ton of praise on this series in July, I got to an end of an issue and I sincerely wondered, “What’s next?”