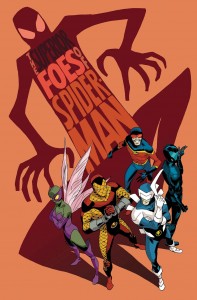 It’s been a long time since a Spider-Man comic has brought me such sheer unbridled joy that I just want to climb to the top of every mountain and make sure anybody who calls themselves a fan of the medium is reading this one book that I just read. But that’s how I feel about the debut issue of Superior Foes of Spider-Man.

I’ve already been told to simmer down with the hyperbole after I tweeted a bunch of hallelujahs about this comic on Twitter last week, so let me clarify my position a bit. First, I’ve REALLY enjoyed the world of Spider-Man comics in 2013, so my praise for Superior Foes and the phenomenal work of Nick Spencer (writer) and Steve Lieber (pencils) is not some kind of subtle dig at Dan Slott and his run on Superior Spider-Man. Superior #9 was probably the best Spider-Man STORY, I’ve read this year, or at least the most important and epic comic, but Superior Foes #1 made me happy in a way that I just wasn’t expecting.

When Marvel first announced that Superior Foes was going to be a part of a themed “Superior Spider-Man” month and that it was going to be an ONGOING featuring the likes of such D-list villains as Boomerang, Speed Demon and Overdrive, I thought it was a delayed April Fool’s joke (seriouosly):

Is this belated April Fools? Don’t know how these guys in a series will work… http://t.co/fHajFI6PRt

A few weeks later, while recording the debut episode of the Superior Spider-Talk podcast, I sarcastically told my co-host, Dan Gvozden, that Superior Foes will probably go on to be “the next Hawkeye,” referring to the comic book industry phenomenon Matt Fraction and David Aja’s Hawkeye has been since launching last Fall.

Apparently I was a prophet, as Superior Foes #1 has the look, feel and tone of Hawkeye – and I mean this as the highest praise possible. I’ve read a couple of reviews that indicate Superior Foes is acting TOO MUCH like Hawkeye, but I don’t think similarities to the most critically acclaimed Marvel title should be held against it. For one, Hawkeye with its stunning use of visuals to drive the story alongside its very funny and sarcastic script, has been a total game-changer for the comic book industry, especially as its related to how the “big two” publishers are pumping out books. Second, given the theme of the book: a day in the life of Spider-Man’s “working class villains” when they’re not getting beaten up by the Web Slinger, the Hawkeye vibe doesn’t feel remotely out of place. If the Superior Spider-Man title started to riff on Fraction/Aja’s style, I could see that for being cause for alarm since it would be a total tonal clash. But these characters are just begging for some quirky storytelling devices. 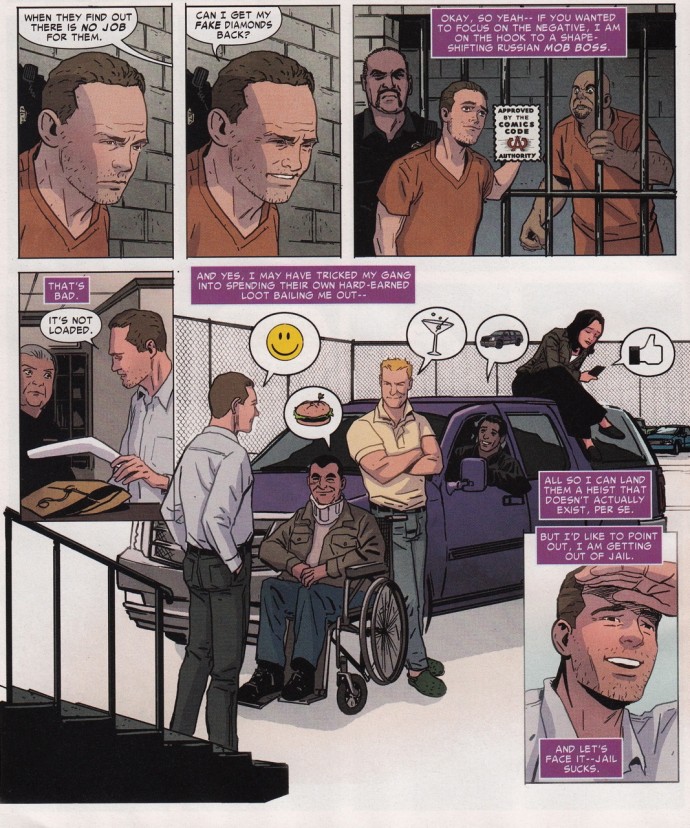 And boy do these characters feel invigorated by the off-beat tone of this book. When was the last time anybody who was a Spider-Man reader actually thought a story starring Boomerang was compelling? This guy had a brief moment of glory in the early 80s during the Bill Mantlo/Al Milgrom run on Spectacular Spider-Man (more on that tomorrow), but even then, the character was portrayed as a loser that couldn’t be taken seriously. In Superior Foes, Boomerang is unquestionably a loser, but he’s OUR loser and in a very bass ackwards way I found myself rooting for this guy to succeed in getting the NEW Sinister Six back together and pull off a successful heist (despite the fact that we learn at the end that the heist he’s planning is more or less non-existent). 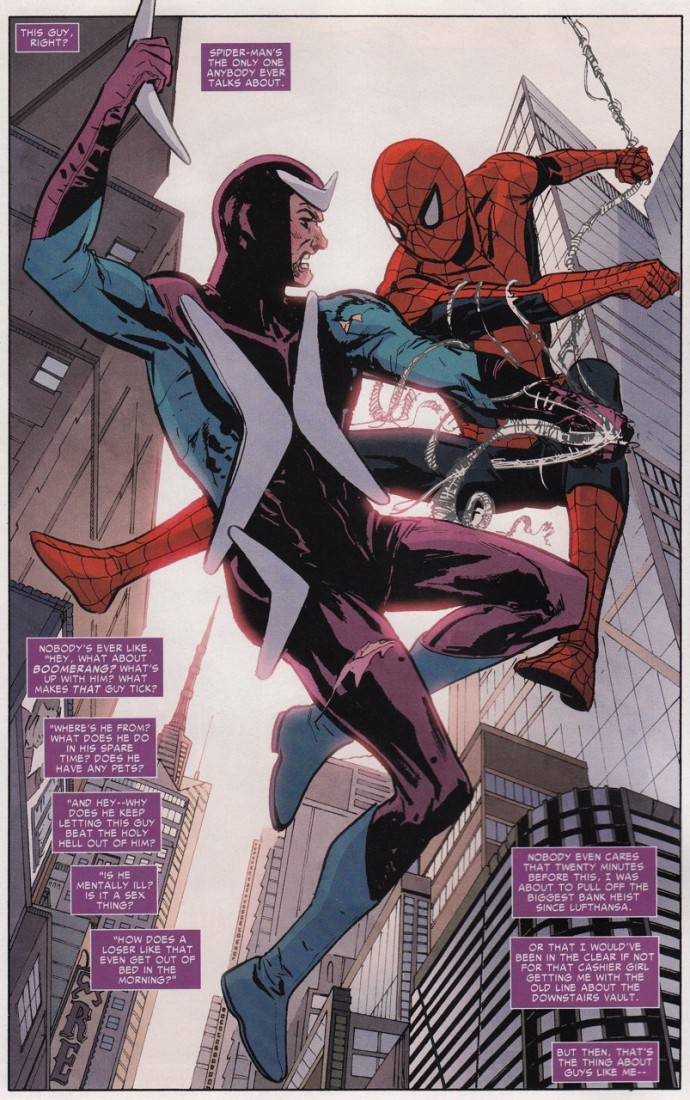 Spencer and Lieber find new ways to top themselves using this cast of unsuccessful buffoons, whether its Shocker and Speed Demon robbing a pet store for birdseed and then complaining about having to lug the thing up a few flights of stairs, or Lady Beetle sticking up a comic book store and (in a not-so-subtle dig at the comic book industry) reading the cashier ramble about variant cover comics.

And that’s what makes this comic book so wonderful. It’s totally fearless and unashamed about the fact that it’s trying to tell us a story about a bunch of guys nobody has ever given more than a passing thought to (I bet none of you even knew Boomerang’s name was Fred!). A few months ago, in reference to the villain Cyclone in Amazing Spider-Man #143-144, I talked about how during the Bronze Age there was a focus more on the gimmick of the villain than the actual character (a characteristic I likened to the world of professional wrestling). Superior Foes #1 is a brilliant example of what happens when you finally start to add layers to these characters’ onions (or parfaits. Everybody loves parfait). 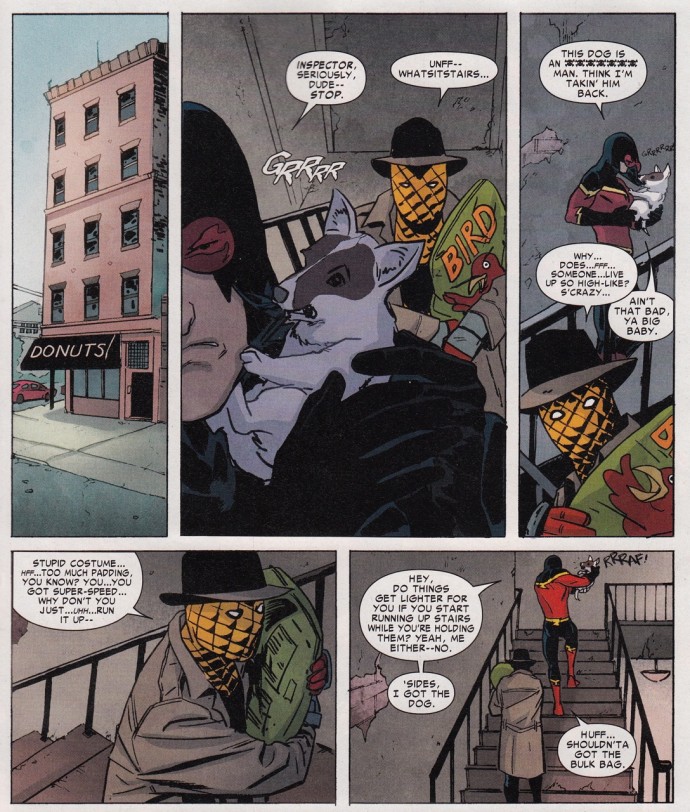 If I had to talk about a flaw in this book, it would be the fact that it doesn’t really tie-in to the continuity of the main Spidey title. I don’t normally get bent out of shape over things like this, and tend to be a little snide about comic book fans who sit there and obsess over the fact that 10 years ago in an issue of some other comic book series, a certain character wasn’t portrayed the same way Slott portrayed him in an issue of Superior or ASM. But I do find it a bit jarring that I’m currently reading about a version of Boomerang who is locked up in the “Raft” super-prison and getting treated for near-death injuries at the hands of Spider Ock in the pages of Superior Spider-Man, while in Superior Foes, Fred has nary a scratch on his face inside a much lower-security prison. The same can be said for the Chameleon, who shows up at the end despite the fact that the last we saw him in Avenging Spider-Man he was locked up in Spider Ock’s laboratory with other members of the (older) Sinister Six. It’s certainly not a critical enough mistake where I feel like it affects the quality of writing and art in Superior Foes, but I do wish Marvel could just sync its titles up better so I’m not sitting there obsessing over such minutia.

Still, I don’t remember the last time I was this excited about a debut issue of Spider-Man “B” title (I can certainly think of a time where I was NOT happy with a Spidey spinoff). Whereas I generally find B titles and spinoffs are a cynical ploy by the comic book industry to get fans of certain characters to shell out more money every week/month, Superior Foes really brings something totally unique and fun to the table, while also providing a niche for more definition to be provided for a group of otherwise neglected/poorly-written characters.