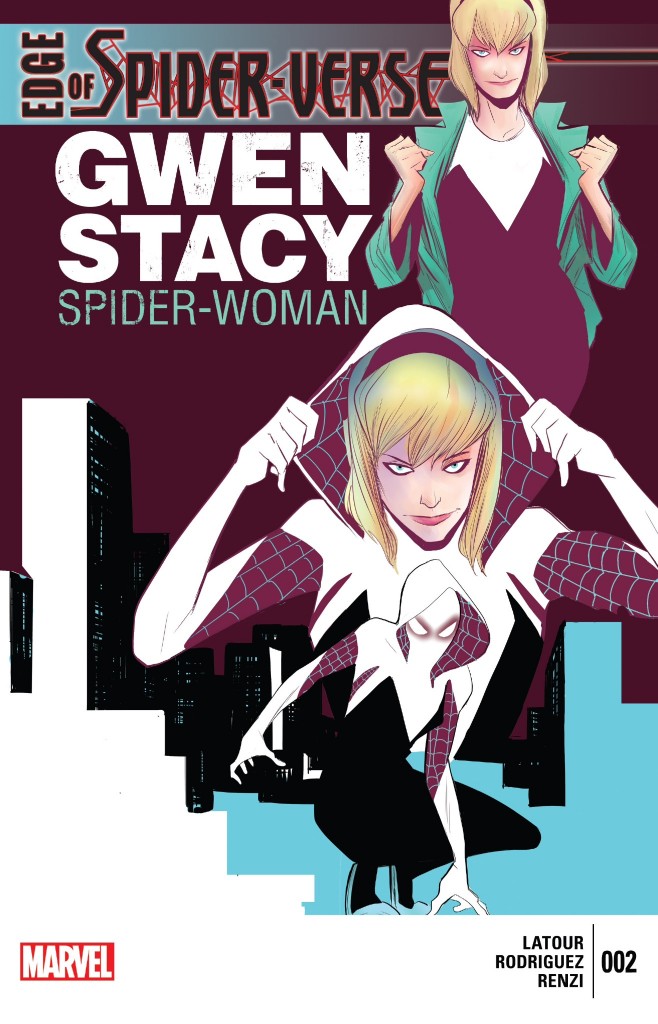 Insert the obligatory, “face it tiger this comic hit the jackpot” joke here.

In all seriousness, Edge of Spider-Verse #2, which stars an alternative version of Gwen Stacy where she has great powers and responsibilities and operates as Spider-Woman, is a really, really good comic. In fact, I would say that Jason Latour and Robbi Rodriguez did such a fantastic job building this universe, that I would be very, very interested in seeing Spider-Gwen extended into an ongoing series provided that the character (hopefully) survives the events of “Spider-Verse” (please, please don’t kill her Dan Slott).

I know I’m hardly alone in thinking this way. In fact, Edge of Spider-Verse #2 may be one of the few times that I can remember where the Spidey fan base was totally titillated by comic’s solicitation, bowled over by the preview art, and still went on to absolutely love the comic once it was published. In all honesty, I was a bit worried about the state of Spider-Gwen prior to cracking open my copy of Edge of Spider-Verse Wednesday because I didn’t think it was remotely possible for the story to live up to the hype it was getting (at least from us hardcore comic book folks). 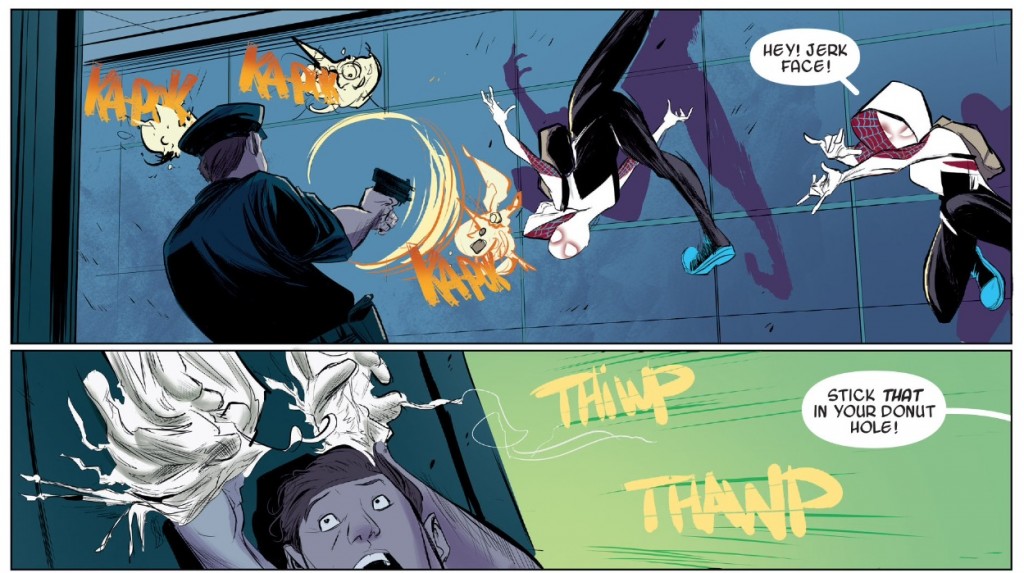 Pardon me while I go into sales pitch mode for a second: if you’re on the fence about buying Edge of Spider-Verse, or heck, just this one comic, please do yourself a favor and bring $3.99 to your local comic book shop (or digital service like Comixology) and pick this book up. Even if you find you’re disenchanted with the current Spider-Man product, go out and buy this comic because if you’re even just a little bit of a Spider-Man comics fan, this book gives you more than enough to cling to as a standalone story in isolation.

So now that I’ve embarrassed myself fawning all over this one story, I should probably attempt to break down what exactly was so wonderful about it.

Folks who follow this blog loyally know I’m a sucker for good characters. And yep, Spider-Gwen is just a REALLY good character – funny, sarcastic, heroic, intelligent; i.e. everything you generally want to see in the fictitious person (male or female) that’s the primary voice of the superhero book you’re reading. 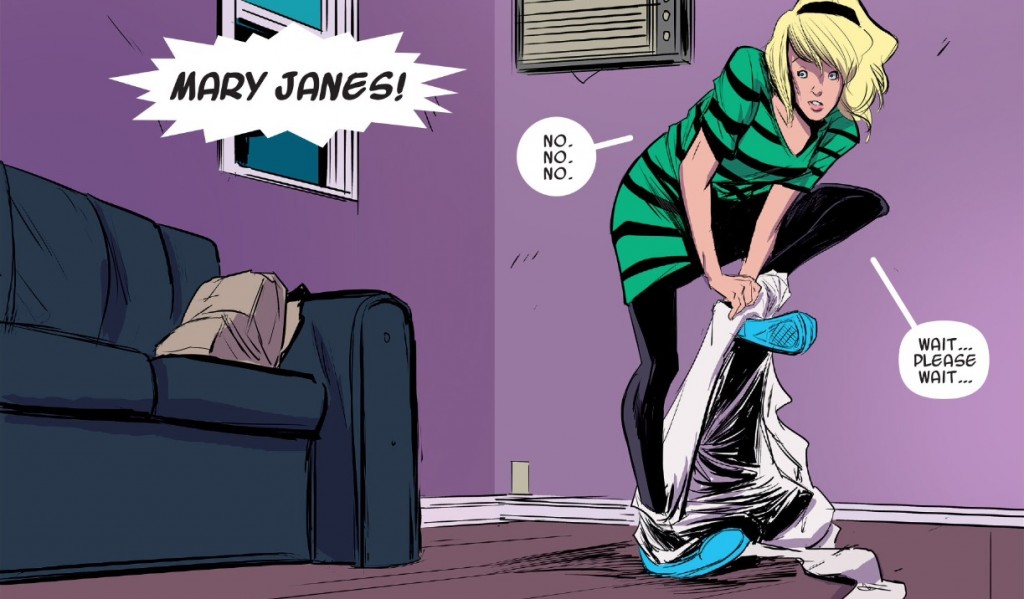 People who know me should also note that I’m a total stickler for quality dialogue. I’m not talking about a writer’s propensity to integrate SAT words, or someone who can think up of some funny/quippy lines. Instead I’m talking about a writer’s ability to utilize the words coming out of a person’s mouth to establish and develop that character. In Edge of Spider-Verse #2, Latour not only successfully accomplishes Gwen’s character via language, but all of the characters within this universe. There’s a rhythmic patter in how all of the characters in this comic speak and while some readers might find it overly stylized (which was a criticism levied against Diablo Cody’s dialogue in Juno – a script I loved for what it’s worth) but I found it to be clever and wholly unique, while simultaneously being completely readable.

The pacing of this book is an absolute marvel, as Latour and Rodriguez have a ton of content that need to pack into the confines of one normal-sized issue. You have to consider that unlike the first issue of this miniseries, the creators here are working from the ground up, needing to establish a brand new cast of characters along with a defined sense of time and place. Latour and Rodriguez stick the landing here by delivering all the pertinent information in a way that keeps the comic movie forward. 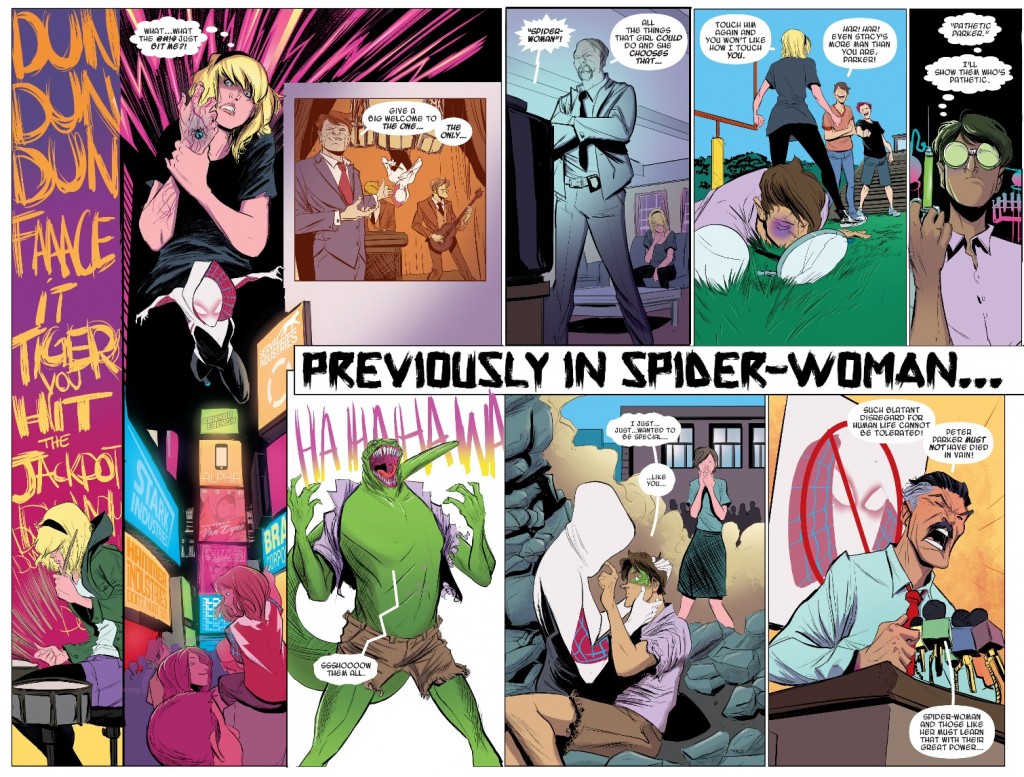 In one spread, Latour and Rodriguez take a page out of the book of Grant Morrison/Frank Quitely and All-Star Superman by essentially establishing Gwen’s origins and motivations to be Spider-Woman over the span of about eight panels and two pages. Of course Morrison and Quitely had the advantage of recapping an origin as well-known as Superman’s in one page, whereas Latour and Rodriguez are taking a huge risk in doing this with their unknown character. And yet the spread gives me all the information I need to know about Spider-Gwen and her “Uncle Ben” moment that leads to her taking her powers more seriously (and responsibly).

I thought it was wonderful how elements of Gwen’s “mainstream” origins, namely, her police officer father, were maintained and used to ratchet up the drama and tension in the story. Obviously Spider-Man needing to keep his/her identity a secret from his closest loved ones is one of those narrative elements that cannot be negotiated away, regardless of where you are in the Marvel multiverse. And yet there was something that much more compelling and engrossing about Gwen needing to hid her secret from her father. The high level of consequence attached to this character dynamic yielded fantastic returns in two different parts of the comic: the first is that sense of absolute betrayal elicited by Spider-Gwen when she stops a crime on a subway and a rookie police officer takes a shot at her. And then the second was her dramatic reveal to her father at the very end of the comic.

Let’s talk about that ending for another moment, because it was a pretty phenomenal ending – maybe not quite on the level of Peter sulking down the alley realizing, “with great power – there must also come, great responsibility.” But certainly one of the better character moments I’ve ever read in an alternative universe/What If? Spider-Man story. The way Gwen uses her father’s own advice against him once she unmasks is a beautifully conceived sequence from Latour and Rodriguez. Again, I don’t easily compare a story written in 2014 with one of the greatest origin moments in comic book history, but having Gwen talk about her costume as her “badge” to her father just gave me goosebumps. By making Gwen’s work and her father’s work analogous, Latour and Rodriguez give Gwen a sense of honor that is really missing from a lot of superhero stories. 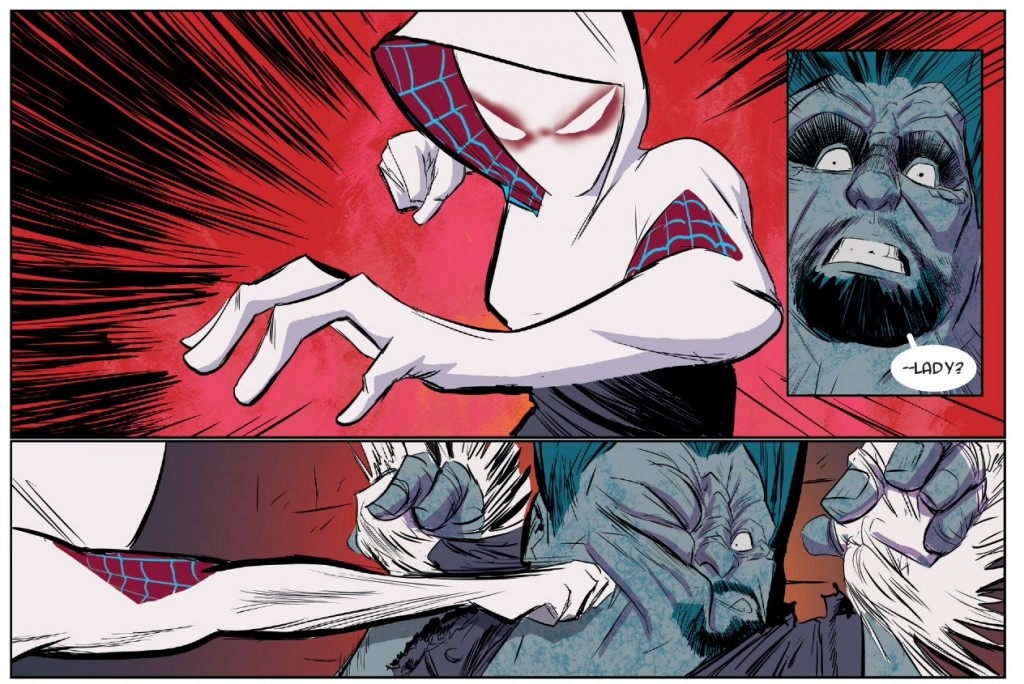 Of course, I’ve talked almost exclusively about the story and the narrative without talking about Rodriguez’s artwork. Let me just echo the other critics and readers who have praised the character design for this story. The Spider-Gwen costume with its use of white and purple is really fantastic, and the book as a whole is really wonderful to look at.

So… yeah… I liked this book. Let’s have some more Spider-Gwen. Apparently she’s showing up in Amazing Spider-Man #9. I can’t imagine that Marvel isn’t seeing the response to this character right now and not thinking of at least giving her a five-part miniseries to start. Hopefully when the sales figures come in for September, the $$$ numbers will support the hype from the fanbase.