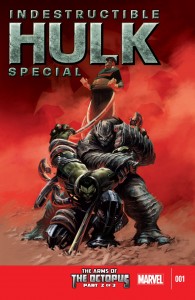 In the Indestructible Hulk Special #1, the second part of the Superior Spider-Man-centric “Arms of the Octopus” arc, agents of S.H.I.E.L.D. use puppies as a means to calm the Hulk’s rage so he can change back into mild-mannered Dr. Bruce Banner. Sadly, the use of cute, adorable little puppies didn’t distract me enough to make me realize that my worst fears about this series are coming to fruition.

While I’m a fan of the comic book medium as a whole, I try to limit my new issue purchases to titles that tie-in consequentially to the Spider-Man universe. I know that attitude prevents me from reading some great, non-Spider-Man stories, but that’s what trade paperbacks and digital resources like the awesome Marvel Unlimited app are for. And to be honest, there are probably a few other series I would maybe take a pass on (*cough* Venom *cough*) if it wasn’t for the fact that I run a Spider-Man blog and want to be up-to-date on what’s going on in those titles on the remote chance that something extraordinarily relevant happens that affects Peter Parker or Spider Ock.

Two weeks ago, I talked about some of my reservations about the potential lack of “importance” for a storyline called the “return of Doctor Octopus” taking place outside of the main Superior Spider-Man title. And yet, I was satisfied enough by the first chapter to maintain my “wait and see” attitude about the the series’ direction. I thought it was shaping up to be another time travel story, but if that was the only plausible way to resurrect Silver Age Doc Ock, I was okay with it.

Instead, we get … robots. 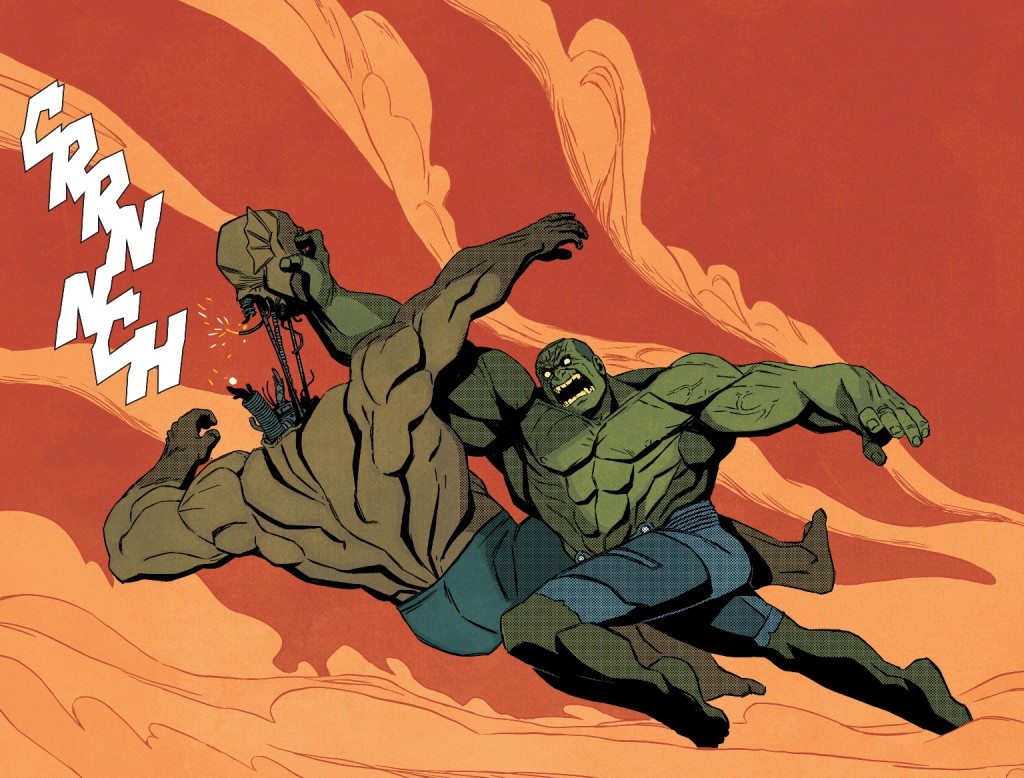 And don’t forget the puppies! 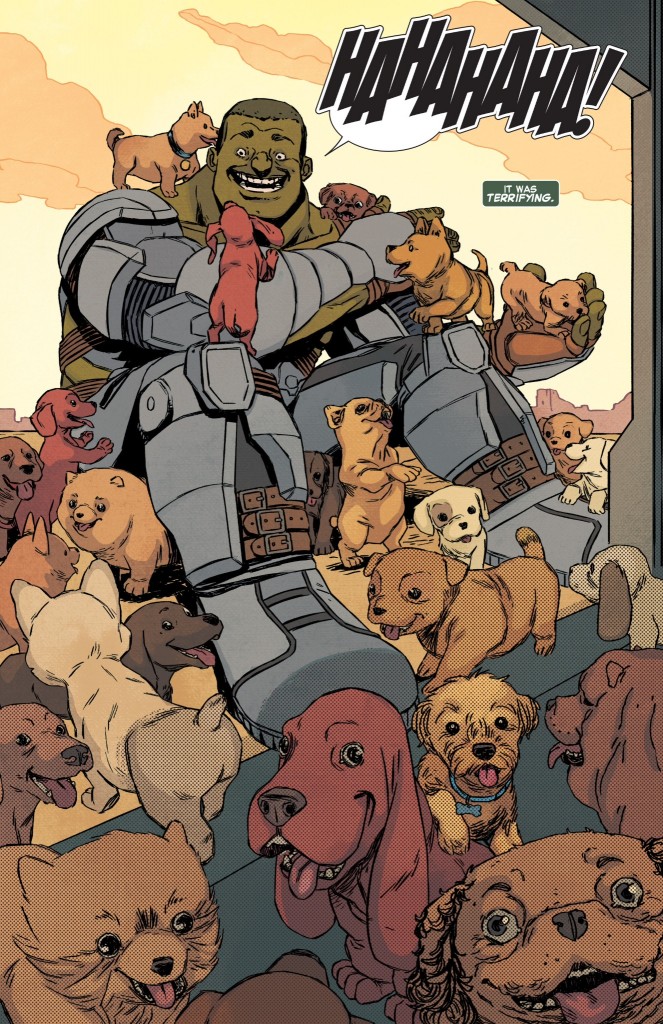 I’m sure my 1995 self is going to jump ahead in time and yell at me for making this comment, but I would have even accepted a clone explanation as to why thought-to-be-dead villains like Doc Ock and the Abomination where showing up in the modern day Marvel universe. At least then it would have raised the question of who wanted to clone these things and set them on a path to destroy Spider-Man and Hulk. Instead we have robot Abomination, and what I can only assume will be a robot Doctor Octopus, all seemingly set into motion by professor David Jude, who undergoes an utterly clichéd and predictable heel turn by the comic’s end. 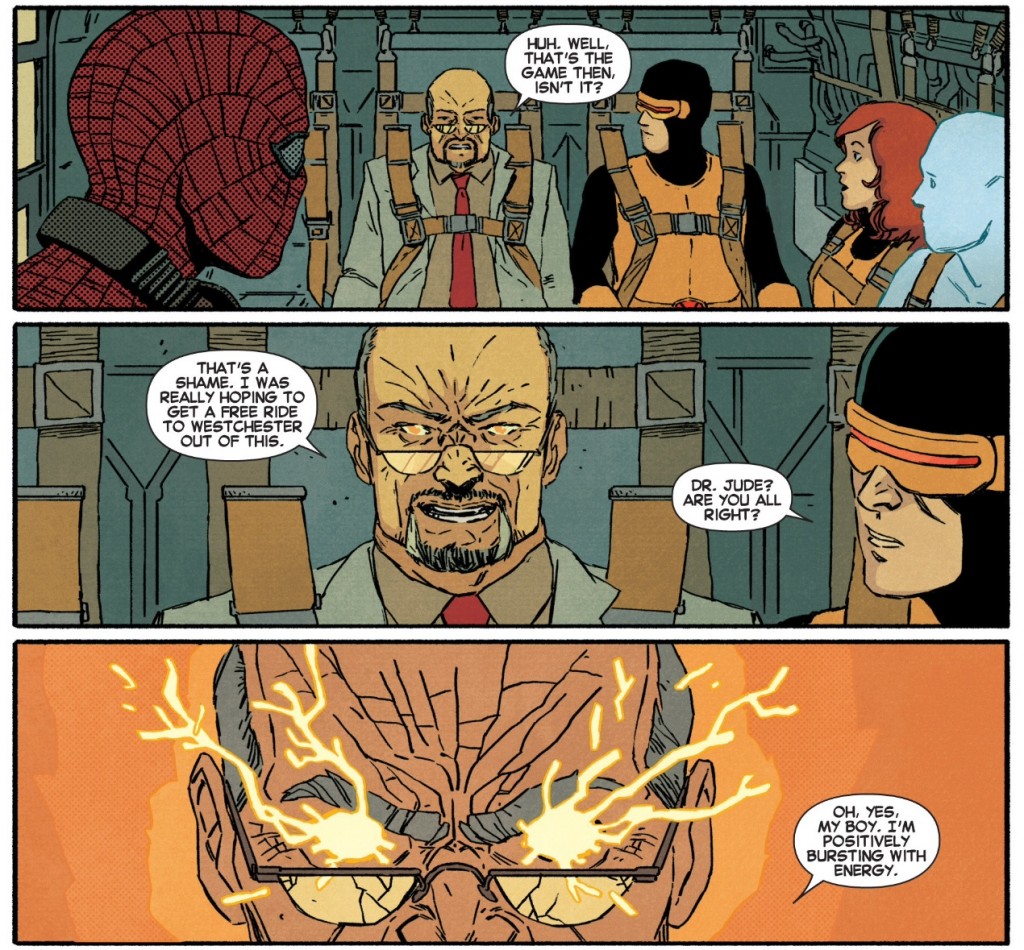 At this rate, the only reason I’m going to buy the last chapter of this series is to support the artist, Michael Dialynas, who I met at New York Comic Con two weekends ago and is an all around great guy (and artist).

It’s not that I think the Indestructible Hulk Special is a BAD comic per se but the “big reveal” is certainly a disappointing one and for $4.99 a pop, I was really hopeful that this mini-series would have given me a better payoff than evil geniuses creating evil robots.

I know that Marvel is not actively trolling Spider-Man fans (at least I hope they aren’t), but it’s frustrating to think they would essentially waste the “return of Doctor Octopus” on this side series that at the end of the day is going to have zero bearing or consequence on the overall Marvel universe. Maybe the X-Men or the Hulk take something back with them to their own respective series, but outside of watching Spider Ock refer to his younger alter ego as a “homunculus” I can’t say at this point if this is one of those “B” series that people will look back on as being anything significant. Even Spider-Man vs. Wolverine gave us the death of Ned Leeds (of course Jim Owsley did that just to spite the “legendary” Tom DeFalco, but whatever). 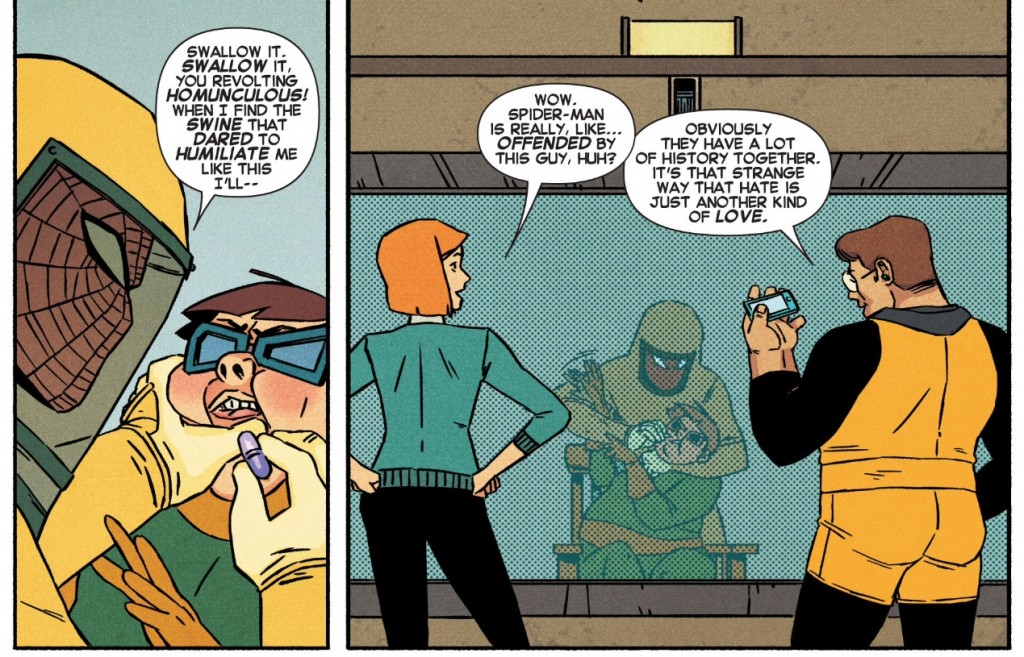 I have to think that if Superior writer Dan Slott had an idea that involved the “return of Doctor Octopus” it would have had infinitely more gravitas than what we’re getting here. I know it’s premature for me to come to such a brazen conclusion when there’s still one more chapter to read, but is anyone out there really expecting some major revelation in the final issue that’s going to carry its way into Superior Spider-Man, or even a secondary series like Team-Up, Superior Foes, Venom, Scarlet Spider, etc.?

When events like “Arms of the Octopus” disappoint, it just makes me more hesitant to get sucked into a “B” series in the future. I’m already spending money on Superior Spider-Man twice a month, Superior Team-Up, Superior Foes, and the occasional mini-series like Superior Carnage and Marvel Knights Spider-Man. Unless something changes dramatically in the Superior Spider-Man special next week – and I’ll be the first to admit I was wrong if it does – this three-parter feels like a cynical ploy to grab my $15 by announcing an intriguing storyline concept and then wasting it in a series that has no bearing on anything. I could be a real pill and say these kinds of stunts help contribute to the collapse of the comic book market in the 1990s, but I’ll withhold that damnation for something more deserving than this story, which will probably read better as a trade paperback or an original graphic novel.