Even after reading All New X-Men Special #1 last week, the first installment of the one-shot traversing “Arms of the Octopus” storyline, which promotes the “return” of Doctor Octopus, I still don’t know exactly what this arc is hoping to accomplisht. Certainly on paper, the story offers a shocking premise: how can Doc Ock return in a universe where the Superior Spider-Man (Spider Ock, SpOck or however else you want to name him these days) currently exists? You couple the potential game-changing effects of a Doc Ock/Spider Ock confrontation with the cryptic “The End” teasers Marvel is releasing in advance of New York Comic Con, and maybe the “bring back Peter” crowd is finally getting their wish and these special event comics are all part of a push to return to the old status quo.

But I just don’t buy it. While Dan Slott is a pretty modest guy, I think it’s safe to say that Superior Spider-Man is HIS baby. How could anything that has any consequence on the future of his character not only be created by another group of writers and artists who aren’t Slott or his usual pinch hitter Christos Gage, but also take place outside of Spidey’s own title to boot? That just doesn’t make sense to me.

So is this series just a mindless diversion designed to do nothing but suck away $15 from my wallet (that $4.99 an issue price tag is certainly steep)? I’m a pretty cynical guy when it comes to the comic book industry, but even I don’t think reading this series is THAT pointless an exercise. I guess in my heart of hearts I just want to make sure that there aren’t any Spidey fans out there who are lapping up this mini with the expectation that something BIG is going to come out of it. At the end of the day, it might just be designed to be an entertaining little romp that revisits a fairly interesting “what if” story that also incorporates elements of time travel (which is a concept Marvel has been pushing hardcore in all of its titles right now). 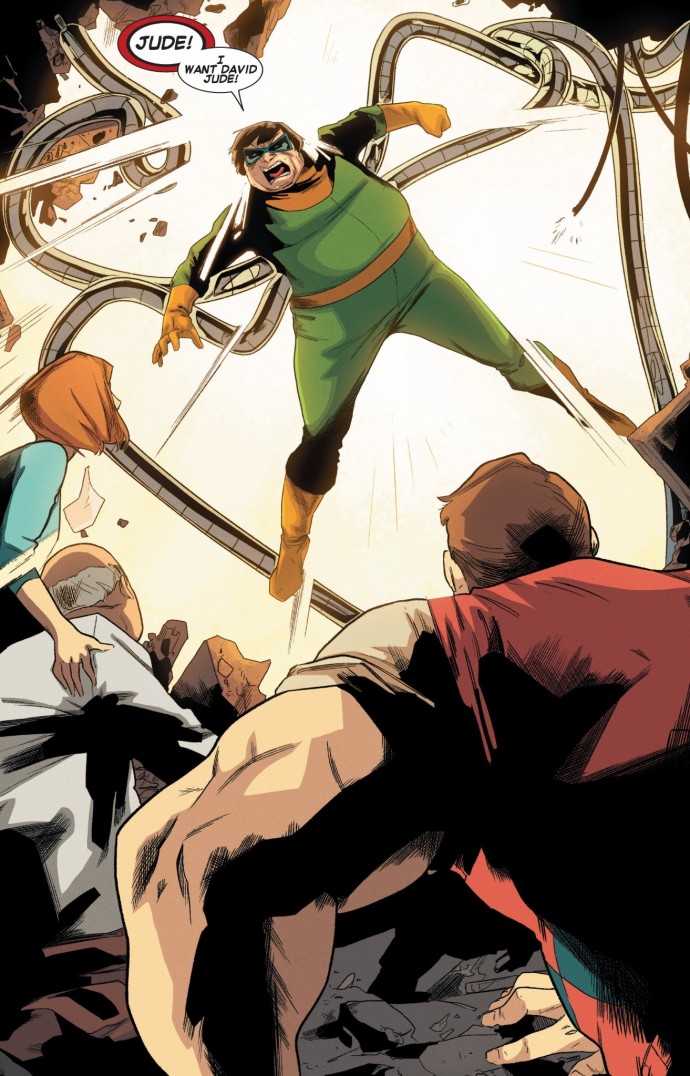 As far as first installments go, I thought the X-Men special was entertaining enough. While I haven’t read any issues of the current All New X-Men series, I was familiar enough with the concept (the original X-Men team from 1963 travels to the modern-day), but I thought the one-shot did a good job bringing me up-to-speed in a way that was brief and to the point. Mike Costa’s script is solid and his characterization of Superior Spider-Man is seemingly in-line with the status quo established by Slott (After there being a ton of inconsistent writing of Spider Ock in the first six months of his existence, I’ve found that more and more writers are now getting this part right, so I may stop bringing this up unless someone really botches it). I especially loved the simplistic, “What is this? Some kind of sick joke?” line from Spider Ock as he finds his former alter ego (looking much younger and significantly less cancer-ridden) at Empire State University. There’s a fair amount of story embedded in those eight words. The line captures Spider Ock’s total disbelief of the situation, but also does it in a way that doesn’t potentially expose his secret identity to anyone. Because why wouldn’t Peter Parker’s Spider-Man be equally shocked if a character he fought to the death a few months ago suddenly reappeared looking like his Silver Age self? 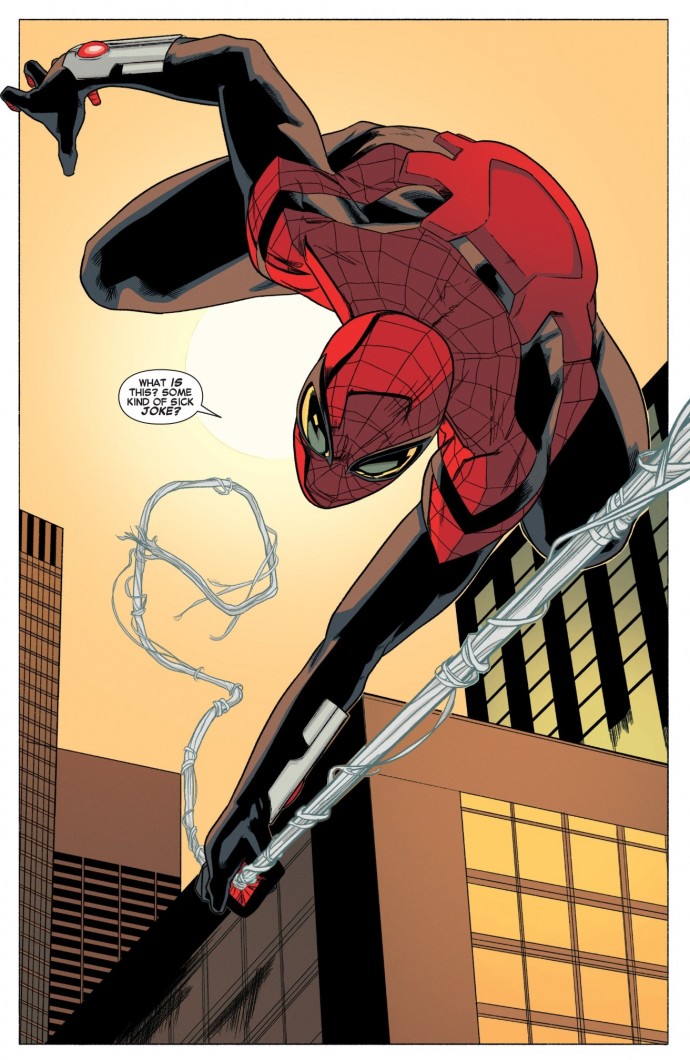 I also enjoyed Kris Anka’s art. In terms of visualization, All New X-Men Special #1 is the polar opposite of what Marco Rudy put forth in Marvel Knights Spider-Man (which I also enjoyed), but obviously this one-shot is going for a completely different kind of story than the darker, drug-induced Marvel Knight series. I read one review that describe Anka’s style as “elegant” and I think that’s the perfect word for it. But he also looks like he’s having a lot of fun in what he’s illustrating. Doc Ock has never looked frumpier and more maniacal since the days of JRSR, and considering this is (I’m assuming) going to end up being a story about Otto time traveling from the Silver Age, Anka hits a home run with his interpretation. 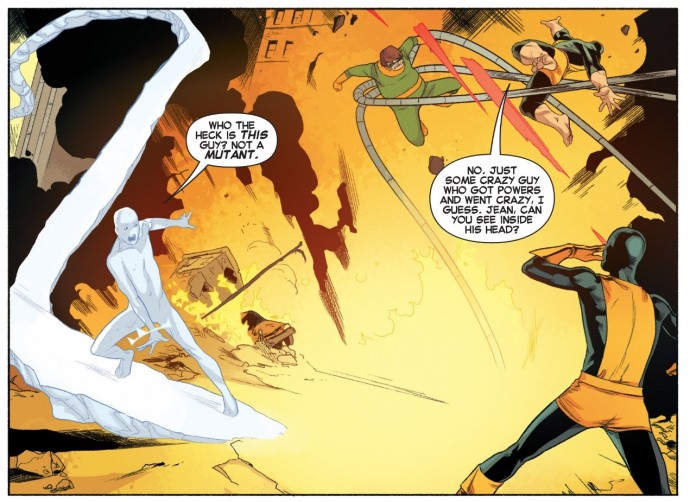 The quibbles I have with the story are rooted in how certain scenarios play out. While I agree that Spider Ock should be incensed by the “imposter” Doc Ock, I also think he would have demonstrated a tad more caution when he confronted his past-self (or clone as he believes). Considering Doc Ock’s oversized ego, I just don’t see a scenario where he would encase his hands in bricks of ice and level himself in the face/head. What if his initial assumption of “clone” was wrong (which it looks like it might be)? It seems counter-intuitive that Otto would want to beat himself unconscious.

Additionally – and this is basically a continuity glitch –  I outright scoffed when Spider Ock questioned the validity of time-travel when we’re in the midst of a time travel arc in the Superior Spider-Man series itself. Spider Ock expressed no such doubts when Miguel O’Hara showed up in the present day New York City in Superior #17, so why would he need any kind of explanation from the X-Men about how the fabric of time is currently getting ripped to shreds throughout the Marvel universe. That little exchange just felt like a needless moment designed to embarrass Spider Ock. While I’m all in favor of seeing the character get proven wrong, I think there are better ways of doing it rather than what they did here.

Meanwhile, the entire selling point of this storyline – why is Doc Ock still alive and tormenting Empire State University – is seemingly wrapped by issue’s end. It’s time travel. Is there really any doubt? If the Silver Age era X-Men could travel through time, what’s stopping Doctor Octopus? If that thesis holds true, then I really don’t see how this storyline amounts to anything significant for the Superior Spider-Man’s remaining story.  It’s not like the Hand has resurrected Doc Ock again and there’s somebody new (or Peter) controlling his brain. So without the element of shock and surprise, what does this storyline hope to accomplish? Trust me, as a fan of this character, I hope there’s some twist I’m not anticipating that comes out in the next issue that sets me up for a wild finale. I’m just honestly not banking on it right now.