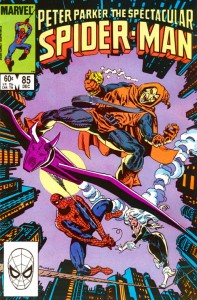 As the only non-Amazing Spider-Man issue grouped in to the “Original Hobgoblin Saga” storyline – and the first one not to be scripted by Roger Stern – Spectacular Spider-Man #85 reads like it has two separate agendas. It marks a very critical moment in the development of the Hobgoblin as a villain when the mysterious man finally injects himself with Norman Osborn’s Green Goblin serum (after using two-bit crook Lefty Donovan as a guinea pig in ASM #245). But despite Stern getting a very gracious “thank you” on the comic’s opening splash page, Spectacular scribe Bill Mantlo still uses the issue to keep pushing the development of Spidey/Peter Parker’s inter-personal relationships with Black Cat and Mary Jane (Spectacular Spider-Man was specifically the book to read for the Spidey/Black Cat romance during this era, and despite my adoration for everything Stern wrote in the early 80s, Mantlo has total ownership on the Spider-Man/Felicia dynamic).

This is not necessarily a criticism of the comic, but just an acknowledgement of how totally different in voice and tone Spectacular #85 is from all of its ASM predecessors and successors. I almost hesitated to include it as part of my “Original Hobgoblin Saga” series of posts, but the issue is collected in one of Marvel’s TPB, plus there’s really no denying the fact that the Hobgoblin taking the serum for himself for the first time is a seminal moment in the character’s history. It’s just that rather than write about all of the fun mind games Stern plays with his readers in ASM, for Spectacular #85, I can’t help wanting to wax poetic about some of things that made Mantlo a very underrated Spidey writer in his own rite.

In earlier issues of ASM, Stern was probably the first writer to elevate Black Cat as a potential three-dimensional character and love-interest for Spider-Man, but it was Mantlo in Spectacular who took this concept and just ran with it. The Spider-Man/Black Cat romance is one of the primary reasons why I have incredible admiration for Mantlo’s Owl/Octopus Wars arc. Mantlo’s Black Cat is exciting in a way no other woman has ever been for Peter. She’s sexy, funny and can seemingly take care of herself on the battlefield – at least that’s what Peter thinks until Mantlo sticks a pin to the balloon that is the truth behind Spidey’s “dreamgirl.” 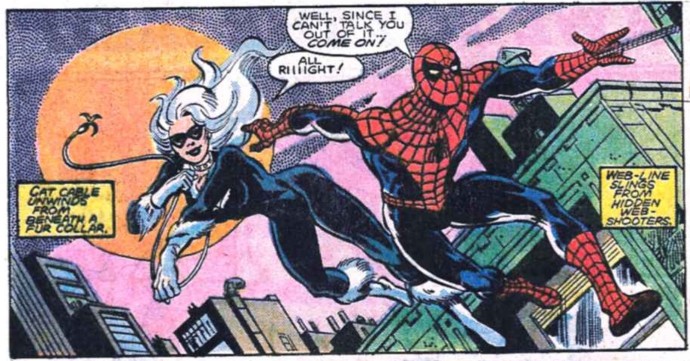 Spectacular #85 is filled with revelations galore about Black Cat that all but damn her long-term prospects with Spider-Man.  First she admits that her “bad luck” powers that had been referenced in some of her earlier appearances were all smoke, mirrors and chicanery – which means she’s not the super-powered babe Spidey thought she was. Additionally, the two share an awkward moment when she asks Spidey to unmask himself and he pauses, leaving her an opening to admit that the man under the mask is irrelevant – that it’s Spider-Man that she loves. This might sound like romantic sentiment, but if that’s not a major red flag for these two, I don’t know what is. While Mantlo plays around with the split personalities of Peter as Spider-Man and Peter as Peter (with some great visuals to boot), these words from Black Cat all but foreshadow why Mary Jane is the hero’s one true love: because she loves Peter Parker and accepts his life as Spider-Man.

Speaking of which, Mantlo hints in this issue that Peter may not be over MJ. After the two meet-up for a lunch at the swanky Tavern on the Green (a six-year-old Chasing Amazing ate there with his parents during a trip to the city and all I remember was being disappointed that my pasta didn’t have red sauce) to celebrate Liz and Harry Osborn’s birth announcement, Peter and MJ steal away for moment and talk about their failed romance. MJ is very, “but wasn’t it for the best?” and Peter agrees, but she also leaves the door for future romance ever so slightly ajar when she drops a “you never know” type of statement about the two of them one day getting back together. And rather than ignore it, Peter becomes very much fixated on what MJ meant by the whole thing.

This is not to say that the Hobgoblin is not throwing his weight around this issue, but rather than make his presence the focal point of the story, Mantlo seems to use the hero/villain battle more as a device to further complicate the Spider-Man/Black Cat romance. Felicia admits that she essentially wants to play Robin to Spidey’s Batman and she’s with him when the Hobgoblin finally makes his powers-enhanced move on Spider-Man. Cat throws herself into the thick of the fight and is clearly overmatched by the Hobgoblin, who’s playing for Spider-Man’s blood and is more than happy to take down his girlfriend in the process. 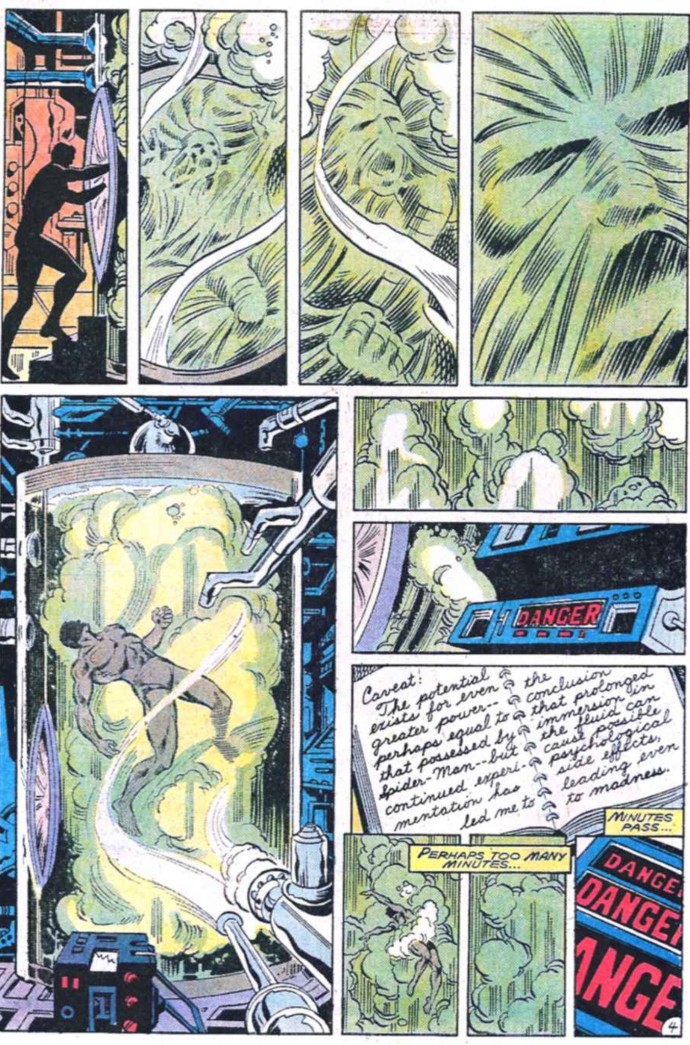 While Spider-Man has teamed-up countless times with other Marvel heroes, he’s clearly way over his head sharing the battlefield with Felicia. In its own way, the whole sequence is like a Bizarro World version of Gwen Stacy’s fatal night with the original Green Goblin. Whereas Gwen is the damsel in distress in this issue and is passed out until the moment she’s thrown off the bridge, Felicia is also in extreme peril but is insistent on proving herself as Spider-Man’s equal in a fight. She suffers a number of near-misses, distracting Spider-Man from taking care of Hobgoblin. And just as Spidey is playing possum with the villain in hopes of capturing him, Felicia misreads the situation and screws up Spider-Man’s trap, allowing Hobgoblin to get away.

The closing image of Spider-Man walking away from the Black Cat in frustration is both striking and dispiriting. The exchange the two lovers has always mirrors some cryptic words from Flash Thompson’s girlfriend Sha Shan after the duo act mysterious and angry with other upon leaving Liz and Harry’s luncheon: “it’s what he didn’t say.” Black Cat asks Spider-Man if he blames her for the Hobgoblin escaping, and while he doesn’t put the blame on her (which he should), he also doesn’t deny his anger, leaving the two at a true crossroads since Felicia first returned at the beginning of the Owl/Octopus Wars arc. 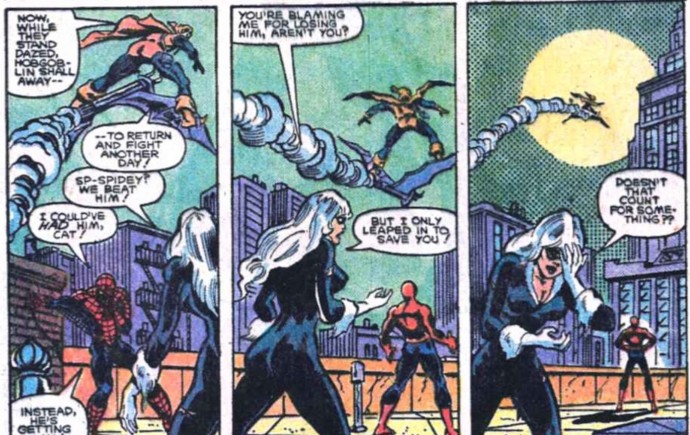 As a quick aside pertaining to Flash’s disengaged behavior in this issue, I’m guessing this was Mantlo’s way of throwing Thompson’s name into the ring as a potential Hobgoblin suspect. Peter even goes out of his way to bring up the fact that he finds it funny that his former high school tormentor is now one of his best friends, and Flash seems pretty non-plussed and distracted by the whole thing. Of course, Flash would go on to be framed as the villain by the real Hobgoblin a few years after this issue is released.

I have to imagine reading this comic, which is clearly a Mantlo story, in a collected edition in sequence with all of Stern’s ASM issues is a bit jarring. But I still think Mantlo did an admirable job mixing the mysterious “who is the Hobgoblin” tidbits, with some of the storylines he was pursuing on Spectacular during the same timeframe. While reading these comics, I found it awe-inspiring that during the same timeframe, ASM and Spectacular were both running some of their most famous storylines ever (and some of my personal favorites). 1983-84 turned out to be a treasure trove for fans of Spidey comics and the fact that Hobgoblin arc was able to jump across titles without completely disrupting the flow of the respective series is a testament to how much ASM and Spectacular were firing on all cylinders.

This is part five of the Original Hobgoblin Saga. Part six, Amazing Spider-Man # 249 will run next Thursday.