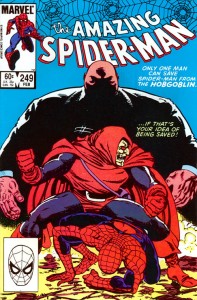 After months of planning, plotting and misdirection, Amazing Spider-Man #249 shows an invigorated Hobgoblin who is finally starting to make his master plan of conquest apparent to his intended victims. Beyond the Hobgoblin’s initial introduction in ASM #238, this issue and the two that follow (marking the end the “Original Hobgobin Saga”) are my favorite parts of the storyline because they demonstrate just how powerful and important Hobgoblin has become in just a short period of time.

I’m sure even after the previous five Hobgoblin issues were originally released in the early 1980s, fans and readers were thinking that Roger Stern and John Romita Jr.’s brand new villain could potentially become just another Green Goblin rip-off. With the glider, pumpkin bombs and the long-simmering secret identity, what separated the Hobgoblin from the Green Goblin besides infinitely more hype and 20 years of real time?

But the storyline that kicks off in this issue has long been the “ah ha” moment for me when it comes to the Hobgoblin. This guy was different, in ways that are logical, well designed and deliciously evil. In some of the Green Goblin’s earliest appearances he used his strength and technology to become a leader of the criminal underworld – a life choice that certainly has its benefits if you can keep an iron grip on things (just ask Wilson Fisk that). Then in later issues, the character had become so obsessed with beating Spider-Man/Peter Parker that his vengeance became his focus. 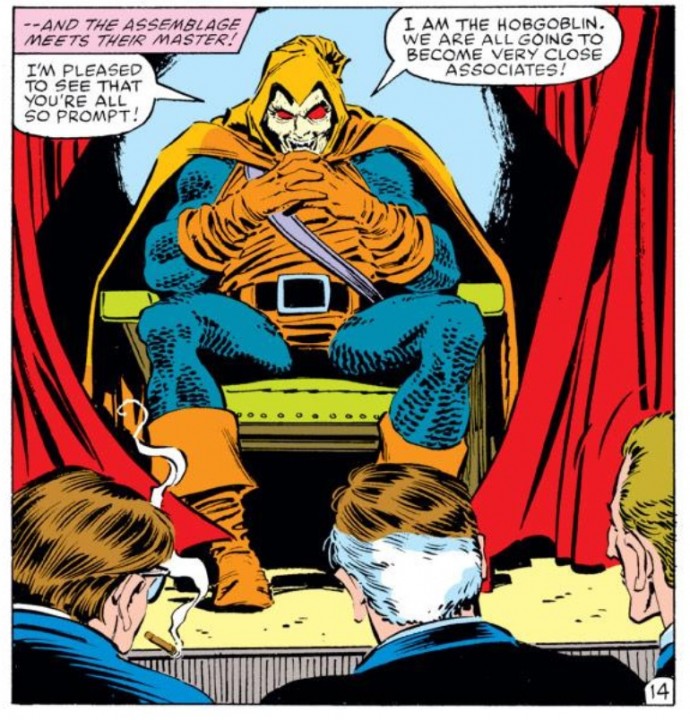 Such things like criminal superiority or the defeat of a costumed teenager are mere trifles for the Hobgoblin. Instead, this character’s desire is to far more anarchistic. He sends out cryptic letters to some of New York City’s wealthiest and most powerful individuals like Harry Osborn, J. Jonah Jameson and others. From there, using hard copies of evidence he acquired during his raids on Norman Osborn’s warehouses, he uses information against these individuals to blackmail them. The Hobgoblin seems to have all the cards in his deck. Harry and JJJ are powerless to stop him, as are the rest of the individuals gathered for this cryptic meeting. 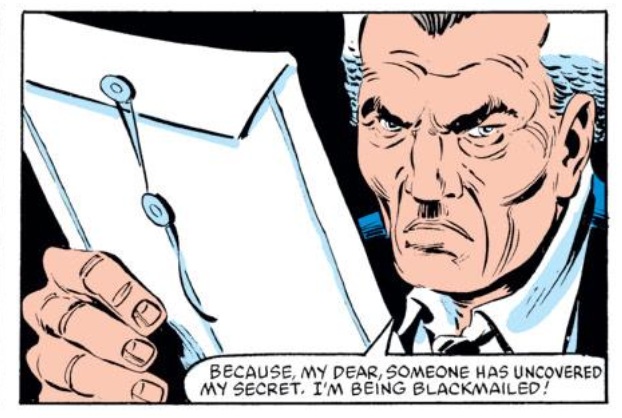 Personally, I find Hobgoblin’s plan to be so much more satisfying than a lot of what the Green Goblin was doing to in his later days (the first time around). There’s sophistication to the Hobgoblin, especially since he has no emotional attachments and is an equal-opportunity offender. In a great bit  storytelling, the comic ends with a fun twist when the Kingpin revives Spidey, who’s been knocked out with Hobgoblin’s gas (and loses his spider sense) and tells him he placed one of his Spider Tracers on the Goblin’s glider. When Spider-Man asks Kingpin why he would help him, the mob boss replies that the Hobgoblin poses a threat to his position in the underworld and he’d rather not have to deal with that right now. If you’re getting a guy like Kingpin to notice you, you’re doing something right (or terribly wrong).

ASM #249 also starts playing some hardcore guessing games with the Hobgoblin’s identity. After he first presents himself to the guests at the club, Harry attacks the Hobgoblin in a fit of rage. Harry’s blows knock the Goblin’s head clean off his body, revealing him to be a robot. That’s when the real Hobgoblin bursts through the club’s window and wrecks havoc.

In a moment that was clearly meant to be more significant than how it ultimately worked out, Roderick Kingsley, a tertiary character that was introduced by Stern in an earlier issue of Spectacular Spider-Man, cries out after the robot is revealed that “anyone” could be the Hobgoblin, including someone in the room. As history would show, it’s a total “lady doth protest too much,” moment, but without the additional context and plot development needed to keep Kingley’s name in the “could it be” game, the hint goes nowhere. Kingsley is of course revealed to be the Hobgoblin years later by Roger Stern in his “Hobgoblin Lives” mini-series. Despite not establishing any other clues pointing to this fact, Kingsley apparently has a twin that would portray Roderick in public places where the Hobgoblin showed up. But how we were supposed to know that at this point time (or when Peter David revealed the Hobgoblin as Ned Leeds in 1987)? 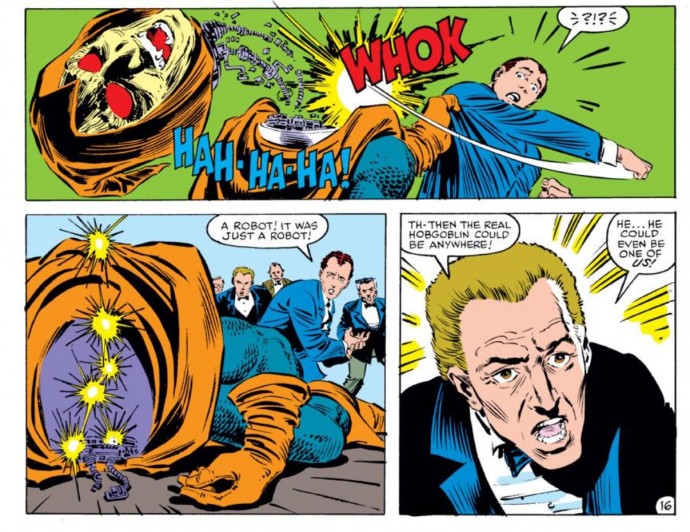 On a final note, just to turn the screw a little but more, Stern sets up what is shaping up to be a “definitive” throwdown between Spidey and Hobgoblin by taking one of the hero’s primary powers – his spider sense – and rendering it ineffective. Stern already was the master at the “Spider-Man overcoming all odds” story with his Juggernaut two-parter a few years earlier, and Spidey is clearly the underdog again going into ASM #250. Even with the Kingpin on his side (for selfish reasons), Spidey can’t track down the Hobgoblin and the tracer without his senses. So instead, he’s going to have to go about doing things the “old fashioned way.” 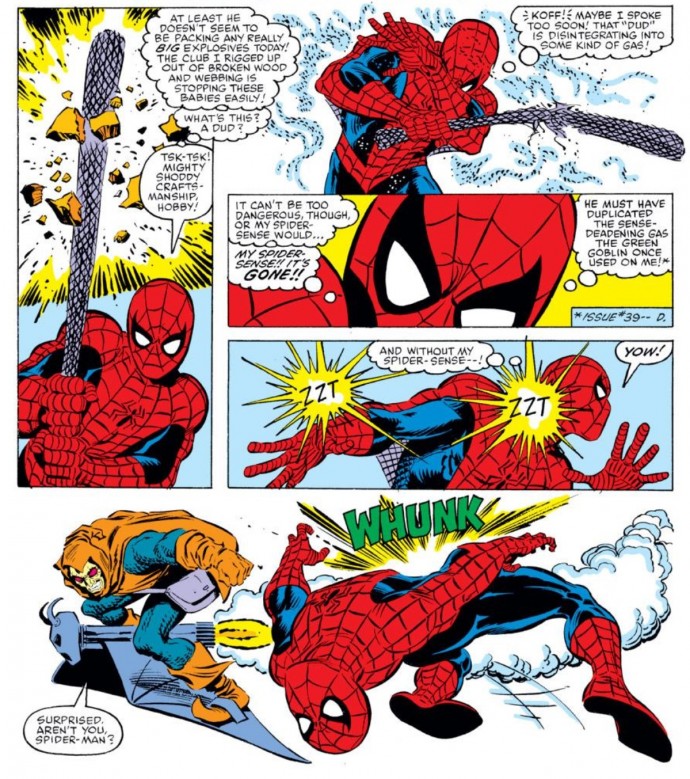 I’ve said it countless times on this blog, but I identify with underdog Spider-Man more than any other iteration of the character. That’s a big reason why some of the recent issues of Superior Spider-Man – which show a dominant character at the top of his game – were so aggravating for me. Flaws add depth and weakness, as long as it’s not equated to cowardice is nothing for a hero to be ashamed of. Because of Stern’s set-up, Spider-Man’s eventual confrontation with the Hobgoblin looks like it’s going to be a lot of fun. I know what I think about this storyline all these years later.

This is part six of the “Original Hobgoblin Saga.” Part seven, Amazing Spider-Man #250, runs next Thursday.