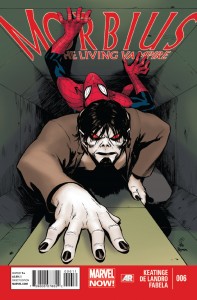 I think the only thing that surprised me when I read that Marvel had cancelled its Morbius the Living Vampire series was the fact that the title was allowed to get as far along as nine issues before the plug was going to be pulled. I thought the comic was a mess from its very first issue, and to be honest stopped reading after issue #2. When checking out the reviews of the comics that followed, it looked like I made the right decision.

And yet when Morbius #6 came out last month as the first of a two-parter starting the Superior Spider-Man, I thought it was worth a second look. Not because I thought the series would get in my good graces – it’s way too late for that – but because I thought the Morbius-centric Amazing Spider-Man #699.1 writer Joe Keatinge penned last year (the comic that basically was the prologue to the Morbius series) was solid enough for me to give a Vampire/Spidey team-up story a read.

This arc is far from transcendent, but I also found it to be “likeable enough” in a 2013 comic book series kind of a way. When scouring the internet for other reactions to Morbius #6 and #7, there seems to be an awful-lot of hate for the storyline, with the bulk of the reviewers providing us with long-winded rants about minutia that comes across more as pathological nit-picking rather than legitimate criticism. Perhaps these people are scarred by the fact that they had high hopes for a series about Morbius and the title just never delivered for them, and thus they have a lot of anger built-up about the whole thing. Or perhaps this is just a case of people tap-dancing on the title’s grave now that it’s been given the axe. While this I far from a ringing endorsement, I’ll say I enjoyed these two issues more than I’ve enjoyed the Philadelphia storyline in Venom.

I guess what redeemed things a bit for me here is the very conscious effort to move Morbius away from the hoodie-wearing derelict patrolling the streets of BROWNSTONE! (seriously … I get it. Brownstone is one of the last neighborhoods in Brooklyn that hasn’t been gentrified out the ying-yang. I really don’t see the entertainment value in constantly referencing what a dirthole it is) and back to his roots as a man of science and a sometimes friend/sometimes adversary of Spider-Man. Like everything else during the “Superior” era, pairing off Spider Ock with some of the long-term supporting characters produces fresh story-telling and while the arc felt very much like a Spider-Man story in Morbius’ own book (he gets throttled by Spidey in record time in #6), given how much the series was struggling just focusing on the vampire, I can’t say I  minded the redirect of Keatinge’s focus. 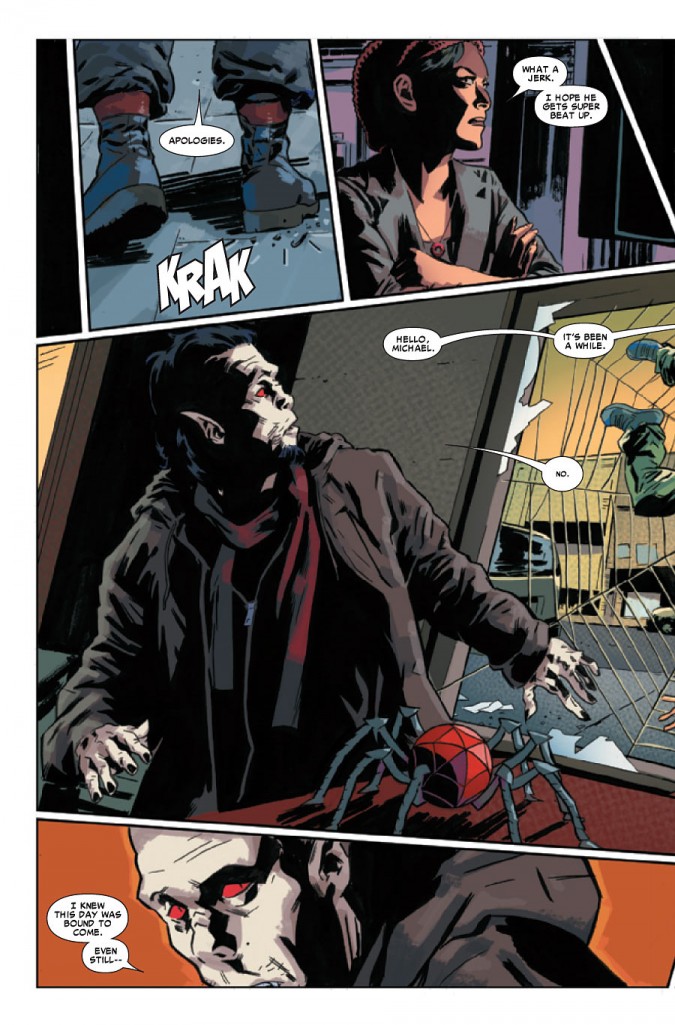 The storyline brings Morbius back to Horizon Labs and references events from last year’s Amazing Spider-Man/Lizard arc that reaffirms the convenient (and seemingly forgotten) truth that Morbius is actually a brilliant scientist underneath a monstrous exterior and like Curt Connors, and is seeking a way to bring back his inherent humanity. I mostly enjoyed the interplay of Otto and Morbius – especially when Morbius had to call out Spider Ock for his rampant egomania in favor of the vampire’s own scientific deductions. Since Superior launched in January, Otto has yet to be paired with a scientific mind like Morbius. Meanwhile, Keatinge gives us a mea culpa and puts Morbius in a new costume, with the character mocking the hoodie to boot. 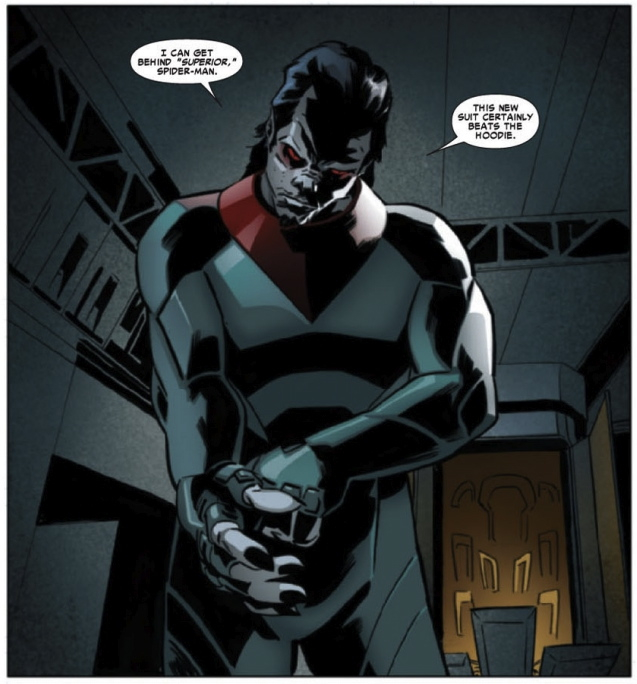 Does all this make an award-winning storyline that I’m urging people to rush out and read right now? No. It was an average story that entertained me to the point that I didn’t feel like ripping my eyes out as was the case with the title’s first two issues. It demonstrated a least a recognition from Keatinge and Marvel that the initial concept they developed was not working, and it least there seemed to be some effort put into the comic despite the fact that it’s been cancelled. There are still problems galore. The villain, Nikoleta Harrow, a newbie who may or may not be related to old-time Spidey bad guy Jonas Harrow, was basically an amalgamation of every female supervillain cliché in comic book history – from the tight-fitting costume to the insufferable amount of arrogance and orating. The other villain, another classic guy, the Rose, felt like a non-factor. The comic’s art came across as sloppy and rushed in sections. Morbius is still, indisputably, a lackluster comic book series.

The big question for me is now, with its cancellation, what kind of future does the character Morbius have in the Marvel universe? Morbius strikes me as one of the guys who people always say they like more in theory then they do in practice. He’s never really enjoyed a sustained run in his own title outside of a 32-issue solo series in the early 90s and always seemed to be best remembered for stories where he plays second banana to an established star (more often than not, Spider-Man).  Does this mean that Morbius can never work in his own title? I have my doubts that he can. Marvel would probably be better served doing a Morbius-centric mini-series here and there a la what the strategy has been with Carnage the past few years.

What’s even more funny about the latest Morbius experiment was the comic’s first issue seemed to be protesting a bit too much about the fact that readers shouldn’t be expecting another vampire love story like Twilight or True Blood. And while I initially snickered at the joke, as the series progressed and it was apparent that the characterization was so far away from the Morbius I had come to know from Spider-Man stories of yesteryear, the entire premise of this title felt like one big “let’s capitalize on everybody’s vampire craziness” stunt from Marvel.

Seriously … hoodies? Brownsville? Street-level gangs? How about a mini that’s a flashback that can fill in the holes about what Morbius was doing at Horizon last year? Or if you’re really desperate, pair Morbius off with a symbiote as a means to a cure or something of that nature. I honestly don’t want to sit here and try and pretend I can come up with better ideas than Marvel’s bullpen, but this series was doomed from issue #1 and only seemed to find a teenie bit of traction when it went back to telling Morbius/Spider-Man stories.