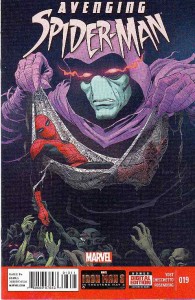 I’m nothing but a slave to convention, and while I realize the events of Superior Spider-Man #9 are at the forefront of everyone’s minds (even this home subscriber, who made sure he get his hands on a copy the day it came out based purely on the buzz I was seeing on Twitter), I also have a very specific way of doing things around here at Chasing Amazing. Since I haven’t had a chance to talk about Avenging Spider-Man #19 – which was a very good issue in my opinion – I wanted to get that out of the way today. I’ll give all of my faithful readers some “bonus” content tomorrow with my write-up on Superior #9, and if I have strength and time, I’ll write one more post (probably a retro issue one) for this Thursday. Starting next week, Chasing Amazing will hopefully get back to its usual Monday/Thursday posting cycle (thanks again, Dan Slott and Marvel, for having to write all these “game changing” comic books!).

But back to Avenging #19, which is far and away the most unique issue since Chris Yost took over as full-time writer and probably the most conceptually different since the series launched in 2011. In what is most definitely a case of not judging a solicitation by its cover, I was pleasantly shocked by how engaged I was by this comic book after seeing months ago, the featured team-up star was a gimmicky outcast from the 90s-era of bad comics named Sleepwalker (who is also, reportedly, a blatant rip-off of the main character from the only comic book series I can get my wife to read, Nail Gaiman’s Sandman).

When the Superior era in Avenging was gearing up last winter, I fully expected the series to focus on long-standing heroes who have had prior dealings with Spider-Man so that the quirks and deficiencies of Spider Ock would be more easily exposed to the Marvel Universe. That’s exactly what we got with the first few issues of the Superior Avenging era when the guest stars were the X-Men, the Future Foundation and Thor. Sleepwalker definitely didn’t belong in this group, but as the overall Superior story marched onward in both Superior Spider-Man and Avenging, the inclusion suddenly made a lot of sense. In fact, even though this comic was technically released between Superior issue #7 and #8, I believe Avenging #19 is the perfect lead-in to the dramatic events of Superior #9. 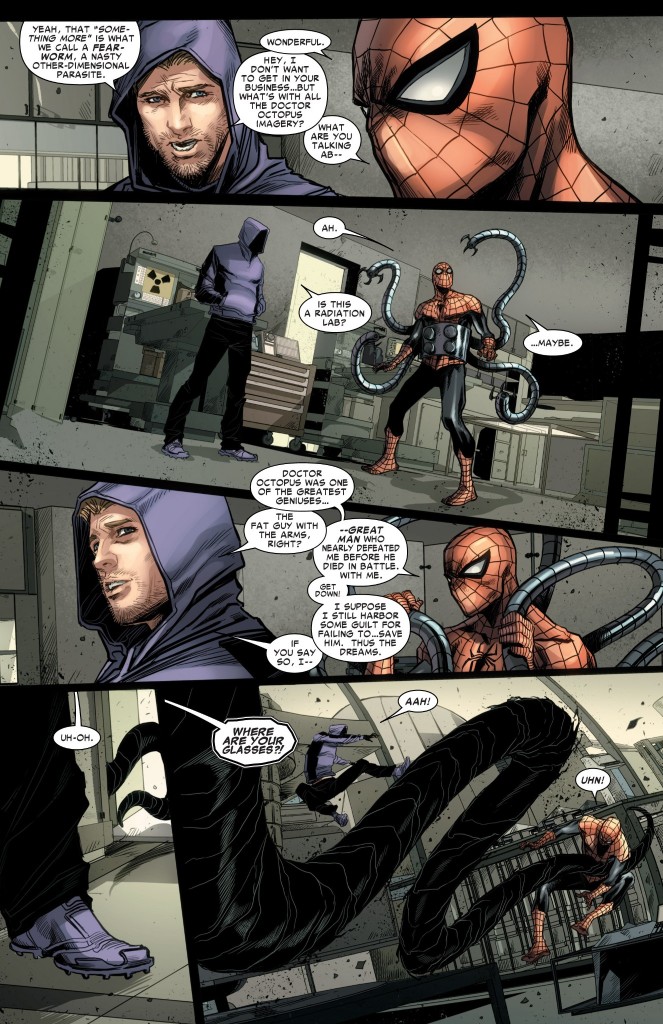 Having Yost focus on Spider Ock’s dream state is the perfect way to demonstrate just how desperate Otto is to remain Spider-Man. One of the biggest questions I had during the “Dying Wish” arc last year was WHY did Otto want to be Spider-Man so badly? Was it strictly for redemptive reasons? Was it just to screw with the life of his greatest adversary? Or was there something more?

Otto’s unconscious (minor tangent: I hate the word subconscious because that’s not what we’re actually talking about most of the time when we talk about “subconscious” thoughts. It’s the dream state, which is the unconscious) reveals the “more.” While I initially wanted to roll my eyes a bit when the fear worm attacking Otto was bringing up his abusive dad again – I just think Marvel can give us more than just a standard “I was abused as a kid” tale to explain away all of Otto’s sociopathic tendencies – Yost does put the device to good use. Earlier in the story, Otto reveals that he’s superior to his father in every way, and yet he’s only able to emotionally overcome him and the fear worm when he realizes that as Superior Spider-Man he no longer has to physically cower in fear from the man. 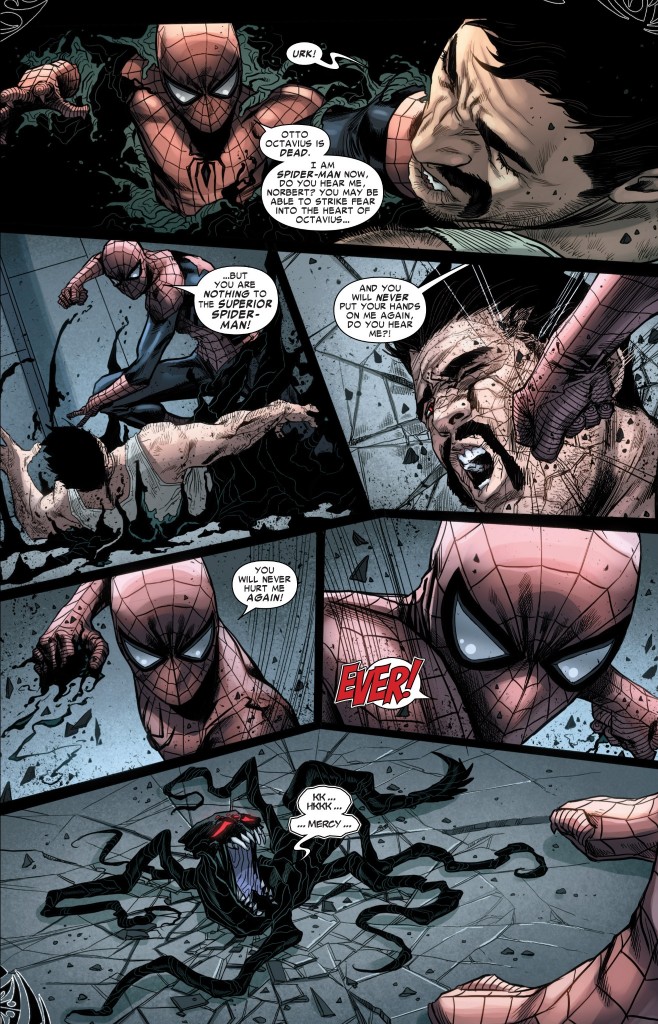 And this works on two levels: Otto is now physically stronger/more powerful than his father as Spider-Man, but also he’s evolving into a better person because of the many heroic acts he’s accomplished as Spider-Man (even if Peter Parker doesn’t agree with Otto’s methods). It makes the whole issue of “why” Otto must stay on as Spider-Man make more sense. Not only does being Spider-Man physically empower him to face his past fears, but by spiritually redeeming him via acts of heroism, he’s also empowering his soul. Without the body of Spider-Man, not only does Otto die as Doctor Octopus, but he dies as a major cancer on society.

These complex emotions are well conveyed via the artwork of Marco Checchetto. While Checchetto is clearly drawing inspiration from Christopher Nolan’s Inception, with all of the askew/triangulated panels of Otto’s mindscape, this is a case where the artwork really advances the story in a meaningful way. The issue reads as almost organized chaos, with real and unreal characters jumping in and out in random frames – again, very much like in Inception. 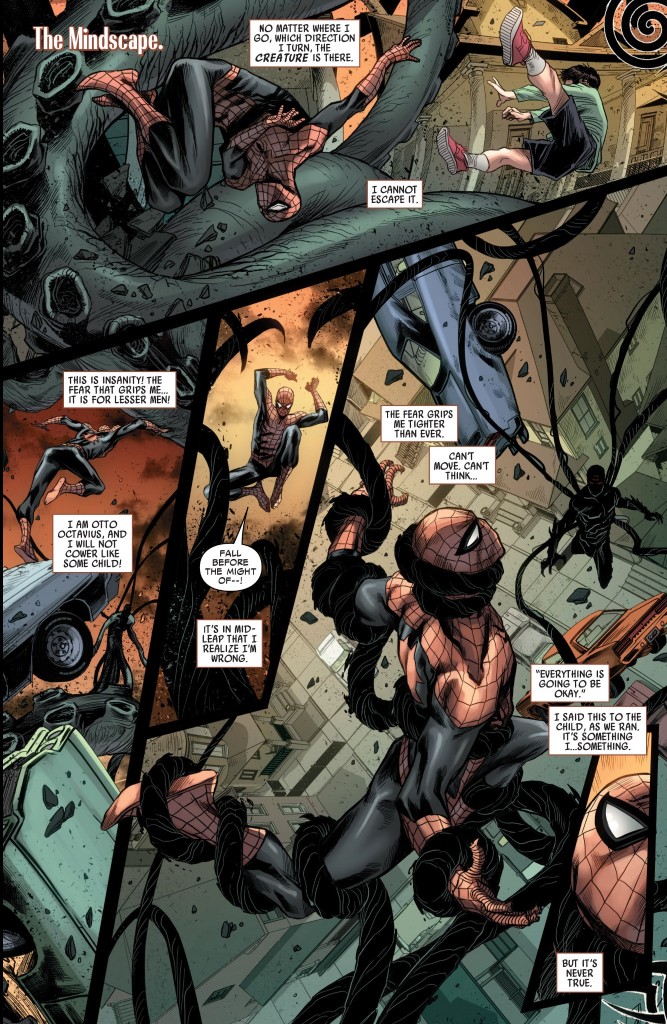 Avenging Spider-Man #19 is just another in the growing line of examples as to why I’ve really embraced the Superior era of Spider-Man comics as both a reader and a long-time fan of Spidey. I will probably end up repeating myself tomorrow when I talk about Superior #9, but as much as Peter Parker’s character and humble humanity was one of the primary factors in having me fall in love with the Spider-Man character as a kid, I also really appreciate and respect Marvel’s right to tell new kinds of stories using Spidey. At the core, these comics still celebrate the essence of Peter, but it’s being done through a new lens, and the result are stories that are just completely different visually and story-wise than anything I’ve ever seen from the character before. As much as I love Peter, the character has reached a point of stasis where I think it’s very difficult to cover any new and exciting ground without taking a bit of a step back. While a segment of the fan base continues to bemoan the direction of the franchise, by going in this direction, I remain confident that Peter will one day be back, and when he is, he will find an entirely new spin on his universe, that maybe we’ve all just grown a little too comfortable with for the past 50 years.