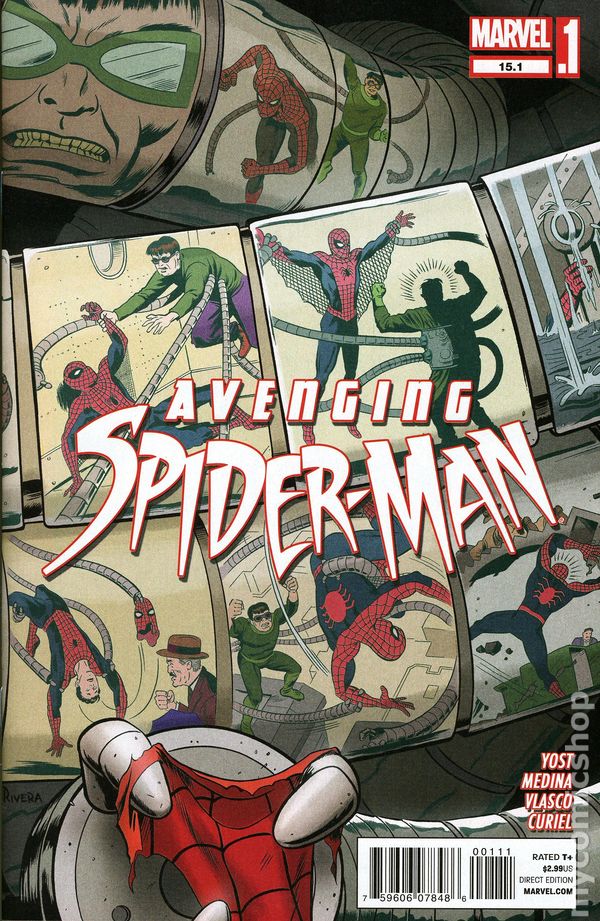 In the final pages of the lead story of Amazing Spider-Man #700, we learned that Doctor Octopus, having taken control of Peter Parker’s body, would carry on his legacy of power and responsibility (maybe) as the Superior Spider-Man, while Peter, trapped in Otto’s cancer-ridden body, died (at least that’s what Marvel wants you to think for a while). Serving as an epilogue of sorts to this story, Avenging Spider-Man #15.1 gave readers a glimpse into what a Spidey-Ock title may read like. And while I honestly believe there are some interesting stories to be told within the pages Superior and the countless other secondary and ancillary titles (Avenging, Venom, Avengers, Scarlet Spider, et al), this point one issue also revealed some of the potential pratfalls at hand when you give the keys to your flagship comic book to a character fans have come to know as a serial killing villain.

In many ways, the tone and dialogue from Avenging Spider-Man #15.1 gave me more apprehension about the direction of the Spider-Man universe than the closing pages of ASM #700. While Spidey-Ock seemed ready to turn over a new leaf in the closing pages of ASM (whether or not it felt organic or not is another story), in Avenging we close in on the arrogant, spiteful sounding Otto that antagonized Spider-Man for decades. It immediately made me realize that watching a character like this struggle with the power and responsibility edict might be fun for a few issues, btu it’s not a long-term direction for a comic book series designed to embrace readers new and old. Simply put, nobody likes spending too much time with a jerk.

What interests me most about Spidey-Ock are his new relationships with Marvel’s established world of heroes and villains. We already got a glimpse of what’s in store in the closing pages of Daredevil #21, the official “first appearance” of the Superior Spider-Man for you collectors out there. We know from interviews with Dan Slott and others that Spidey-Ock is going to have to interact with Spider-Man’s rogues gallery because Doc Ock already had relationships with most of these guys prior to his great mind swap. I want to see how Spidey-Ock responds to the next anti-Spider-Man tirade by J. Jonah Jameson. I want to see when Norman Osborn is in his company, if Peter’s memories flood Spidey-Ock with so much anger over the death of Gwen Stacy and the “Clone Saga,” that his murderous side emerges. Heck, I want to see what happens when Kaine is face-to-face with his clone.

But these scenarios bring on a whole other series of concerns that may damage the longevity of this premise. The creative team has talked about how much darker the Superior Spider-Man will be, and how in a “meta” twist, we, the readers will recognize Spider-Man as a true “menace” as opposed to the characters he interacts with in his fictional universe. But how long can a charade like that truly last for? If we’re to believe that the Avengers are truly “Earth’s Mightiest Heroes,” shouldn’t we expect them to realize fairly soon that there’s something a bit off-kilter about the guy who claims to be Spider-Man? With his superior sensory abilities, shouldn’t Daredevil figure out pretty quickly there’s someone else under the mask? Why is Mary Jane going to hook up with a guy who keeps deriding her as “woman?” (also will Mephisto reappear if Spidey-Ock and MJ get together since it breaks the deal he made with Peter during “One More Day”)?

And that’s ultimately the rub. My assumption is that Marvel will run through these stories and be painted into a corner with their new toy forcing them to either bring back Peter as the true Spider-Man, or transform Spidey-Ock enough that he resembles an alternative universe version of Peter Parker. And from there, aren’t they basically telling traditional Peter Parker stories any way, or is the threat that Spidey-Ock could do something “evil” on occasion edgy enough to really make people care about this new comic?

Ultimately, I get what Slott and Marvel are going for and are trying to do. I agree with some of the things they’ve said in interviews about how similar the young Peter Parker and Otto Octavius were – that perhaps, without Aunt May and Uncle Ben’s love, the Amazing Spider-Man would have been a supervillain, not a beloved hero to millions. While Green Goblin, for years, had caused Parker more pain and suffering, Doc Ock has always been the more reflexive adversary for Spider-Man. You will get no argument from me whatsoever.

And yet I’m still questioning how many months of comic books I can read starring the guy who appears throughout Avenging #15.1. I sincerely want to give this new status quo a chance because I truly believe in my heart of hearts that there is going to be a payoff for all this – a payoff so triumphant and epic, it’s going to put some of the better Spidey story arcs to shame. But for all this to happen, I’m going to be forced to spend some time with someone I don’t necessarily like, and that’s a very tough pill to swallow. I can only hope that Slott and co. not only “know what they’re doing” (whatever that means), but work the careful balance between telling new kinds of stories while creating a universe that’s not only engaging for readers, but inviting. There is nothing worse in entertainment than to feel alienated by the artist. I can’t even start to count the number of times I’ve sat through a play, a book or movie where the art has become a masturbatory exercise by the director or author. I guess that’s my most chilling fear about Superior Spider-Man – that Slott and Marvel will get so caught up in being different, they lose sight of what made people fall in love in Marvel comics and Spider-Man in the first place.