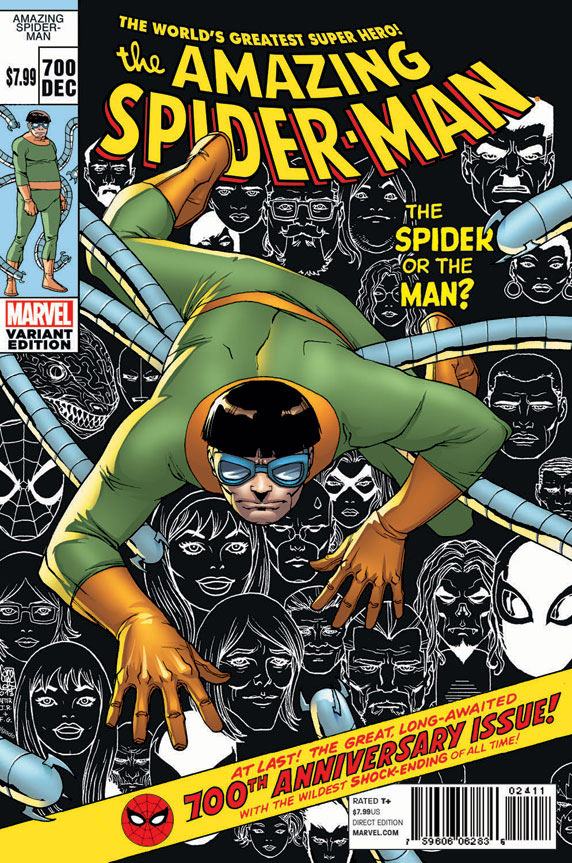 Over the past two months, I’ve been stricken with an unexpected affliction that I hope breaks soon. I’m addicted to Amazing Spider-Man #700 variant covers.

People who are familiar with some of my past opinions on variant covers are probably surprised to be learning this. Perhaps it’s just a byproduct of growing up as a comic book consumer during the peak years of the “speculation era” – too many variants, foil/embossed covers, polybags, special first issues and other gimmicks designed specifically to inflate sales in hopes of a richer return on $1.95 investment at the comic book store. Despite this period nearly causing the bankruptcy and dissolution of many major comic book companies, these gimmicks continue to this day, though with far less frequency.

Regardless, I’ve sill managed to intentionally avoid them. By subscribing to ASM, the issue I get is whichever one Marvel decides to ship out to me that week (which is often the plain Jane first printing, non-variant cover). And while there are some variant covers that are a lot of fun, they are often such a major digression from the content of the actual book – Stephen Colbert in an Amazing Fantasy #15? Wolverine in a Dali painting? – that my desire to seek out these editions is nullified when I see how much over the cover price these books will run me. I’ve even managed to hold out on the really awesome 50th Anniversary covers for ASM #692 based on their online mark-up, especially for the 70s and 80s issues.

And yet, my defenses against gimmickry are apparently down when it comes to ASM #700. It all started when I read that one of the variants was an alternate cover for Amazing Fantasy #15 originally drawn by Steve Ditko. Considering #700 was going to be the “last” issue of ASM, I thought this was potentially a worthwhile investment. I investigated pre-ordering a copy, but the online retailer was already “sold out” of the Ditko variant, plus the list price was close to $200, which seemed steep (considering for another $150, I could track down a G/VG copy of ASM’s #4 or #6 which are currently missing from my collection). And of course now these Ditko variants are selling for well over $1,000. It’s like tracking down one of those “Blue Lizard” variants for Todd McFarlane’s Spider-Man #1 all over again.

But something interesting happened to me while I was monitoring the inflated cost of the Ditko variant. I got a good look of some of the other ASM #700 variants and I was intrigued specifically by the Marcos Martin New York City skyline cover. I was absolutely tickled by the fact that all of the title’s major writers, illustrators, editors, inkers, etc. had their names listed as part of the skyline illustrated. It just seemed like the perfect tribute to this great comic book that I’ve been reading for more than 25 years. I had decided that I was going to break tradition and buy the Martin skyline variant online after the actual issue had dropped the day after Christmas.

But then something else happened. In the days leading up to ASM #700’s release, the issue was receiving so much hype because the story’s ending had been leaked online. Writer Dan Slott was receiving death threats for “killing” Peter Parker. Because I’m a subscriber, I knew I wasn’t going to receive my copy of this comic for at least a week after it was initially released, and I wasn’t willing to wait that long to see for myself what all the craziness was about. I was actually visiting my in-laws up in Massachusetts for Christmas, so I convinced them to direct me to the nearest comic book shop so I could grab a copy to read (it wasn’t unusual for me to own multiple copies of ASM’s “centennial” issues anyway). When I got to the comic book store, there were “regular” copies of ASM #700, and then a small stack of Martin’s “Christmas” variant. Since I was going to be getting the “regular” cover in the mail in another week or two, I grabbed this variant just so I wasn’t spending $7.99 for the exact same comic book that was being shipped to my apartment.

By the time I got back to my in-laws, I went online to order the Martin skyline variant at a comic book shop near my office in New York City that I could then thing pick up in-person after I got back into town the following week. But this particular retailer was all sold out of every copy and cover of ASM #700. I had resigned myself to the fact that the Martin skyline variant was just not in the cards for me … until a few days later I got an e-mail from another online retailer I had ordered from in the past saying they had just restocked all variant covers of ASM #700 (besides the Ditko cover, but I still wasn’t going to spend close to $200 for that). I immediately clicked on the link and saw the skyline cover waiting for me. I dropped it in my shopping cart and was ready to check out until I realized how stupid it would be for me to just order ONE comic book and pay $3 to have it shipped to me. So I also purchased the Olivier Coipel and Humberto Ramos variants and was ready to officially declare an end to this temporary variant madness.

But then Marvel got me again. About a week or so after ASM #700 first went on sale, Marvel announced that due to the success of the issue, they were releasing a second printing edition with a variant cover. Now typically, the modifications for a second printing are minor – maybe a different color is used somewhere in the illustration. But instead, Marvel decides to commission Ramos to design an ASM #700 variant homage to what I recently declared, my favorite issue of ASM of all-time in ASM #300. Seeing this illustration, with Doc Ock taking the place of Spidey on the cover, brought me back to one of my earliest comic book purchases when I was child. I remember being mesmerized by the sheer bombast and celebration of McFarlane’s original cover. I agreed that if my local comic book shop had a copy of the second printing variant, I would buy it, but only under those no fuss/no muss circumstances. And of course they had a bunch of copies (signed by Slott to boot). So now I had purchased my sixth copy of ASM #700.

Finally, my variant madness was going to come to an end. The Ditko issue was still selling for more than a thousand dollars, and there was nothing special enough about the Joe Quesada wraparound variant to justify its exorbitant asking price (plus, I still hold the whole “One More Day” thing against Quesada and I’m not one to get over a grudge easily). There was no reason for me to grab another ASM #700.

And of course I find out last week that Marvel is yet again tempting me to drop another $8. This time, there’s a third printing variant that’s an homage to ANOTHER one of my favorite ASM covers of all time – ASM #100. I have no idea why a third printing was necessary – my local comic book shop still had a boatload of second printing variants. But again, Marvel is taking one of the most iconic Spidey covers of all-time and putting me in a position where I really can’t resist. It’s not like I don’t already own six other copies of this book. What’s $8 for one more? Seems silly to fight it.

This has to be it. Is Marvel going to think up of yet another way to grab my money so the cumulative amount I’ve spent on this one issue is more than $60? A few weeks ago on Twitter, I joked that Marvel should take my absolutely favorite ASM cover of all-time, ASM #50 and toy with the “Spider-Man No More!” concept by showing an image of Dock Ock walking towards the reader with his mechanical arms in the garbage can and the tagline “Doc Ock No More.” I think if Marvel goes ahead and does that for a fourth printing variant, in return for giving them a million dollar idea (probably an exaggeration) they should comp me a copy and maybe find me a good therapist who can get me to kick my ASM #700 variant habit once and for all.