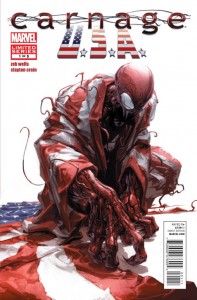 When people dismiss a character as being too “one-dimensional,” what do they actually mean? It usually refers to a character having a weak back-story that readers can’t identify with. Or perhaps their motivations for doing the things they do (whether good or evil) are unclear. Adding to the criticism, one-dimensional characters are usually poorly scripted, get handed corny dialogue, and their presence does very little to advance the plot of a larger story in a meaningful way.

These criticisms have dogged the character Carnage, the serial-killing spawn of the Venom symbiote, for years. For me, Carnage burst on the scene in the early 1990s just as I was getting hooked into Spider-Man comic books again, and I was really into his initial storyline, found in the pages of Amazing Spider-Man #361-#363, primarily because this new villain, who killed with reckless abandon, marked an interesting character-turn for Venom (putting him on the side of good for the first time). It must have been Carnage’s relationship to Venom that made me an initial fan of the character, because from that point on – especially during the overdrawn Maximum Carnage saga – I found Carnage to be dull, hokey, and yes, one-dimensional. 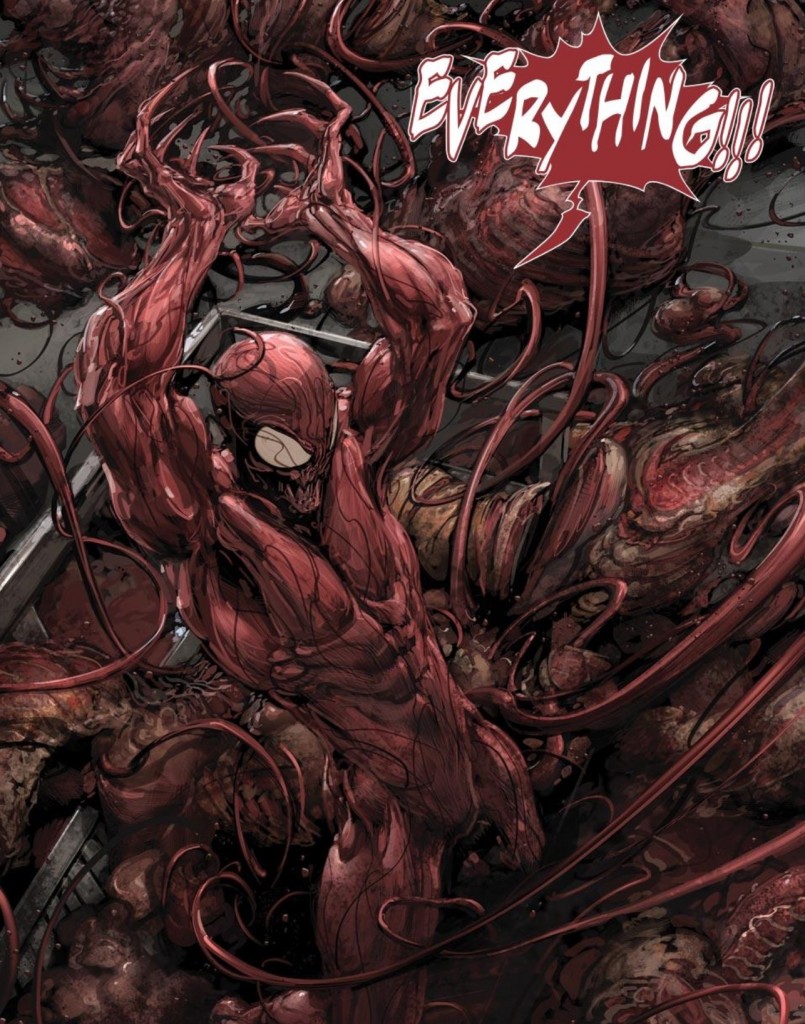 The whole premise that’s supposed to drum up interest in Carnage is the “what if” scenario – what if a remorseless killer like Charles Manson or Casey Anthony (kidding, sortof), bonded to an empowering symbiote. The problem with this premise is that it can’t move much further than the answer, “he kills even more people.” That’s all Carnage seems to do, kill, and make stupid banter while doing it. Yes, there’s always the question of whether or not Spider-Man will betray his own moral code and do whatever it takes to “end” Carnage due to the extreme body count – but again, we’re talking about a villain’s purpose being to enhance another more well-drawn character. You can only get so much mileage out of a character who’s more “talent-enhancement” than talent himself. 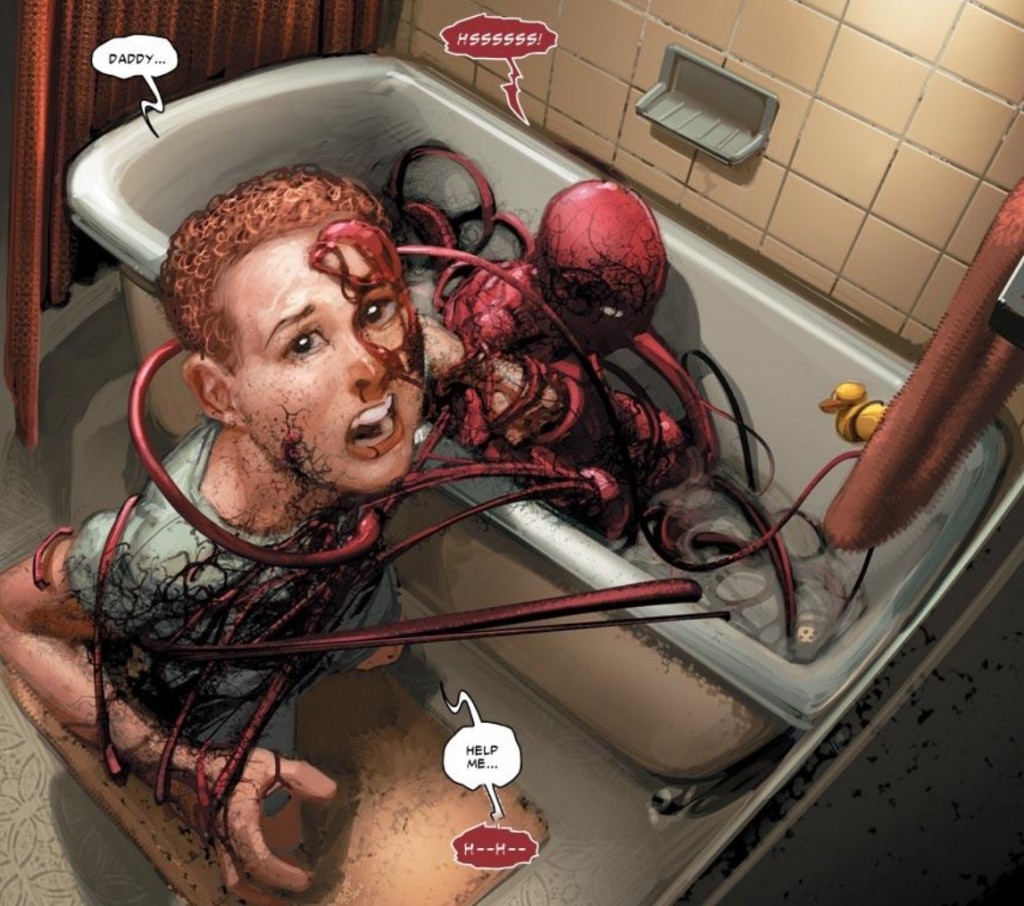 So that’s why I walk into this new Carnage USA miniseries by Zeb Wells with great caution. Can Wells do the impossible and finally make this Carnage character more than just a thoughtless killing machine? Is that even a topic that’s open for discussion?

The set-up for this series is interesting enough, and similar to his work on Avenging Spider-Man, Wells really has an ear for Spidey’s customary wit and banter. The interplay between Spider-Man, Hawkeye and The Thing in Carnage USA #1 has already been praised by a number of other reviewers out there, and with good reason – it was FUNNY. But beyond the banter, we have Carnage terrorizing a small-town in Colorado essentially declaring himself president of this new sovereign land. That’s a fascinating premise to work around, if – and it’s a big if – Wells and Marvel can justifiably explain WHY Carnage is doing this and what he hopes to ultimately accomplish. And for the 50th time already, killing for the sake of killing is not a motivation, at least not in my book.

But I know there’s a contingent of comic book fans out there that are going to eat up the assumed bloody-thirsty silliness of this series, and to that I say more power to them. I was never a big fan of slasher films as a kid – in fact I used to cover my eyes through showing of the Friday the 13th and Nightmare on Elm Street movies. I won’t even bother to watch any of today’s gore-fests like Saw or Hostel. But movies like those make money, and Carnage has remained popular and in-demand the past 20 years despite wannbe sophisticated-types like myself sipping our martini’s and crying “but what’s his motivation lovey?” I’m sure my type would have been slaughtered by Carnage post-haste. 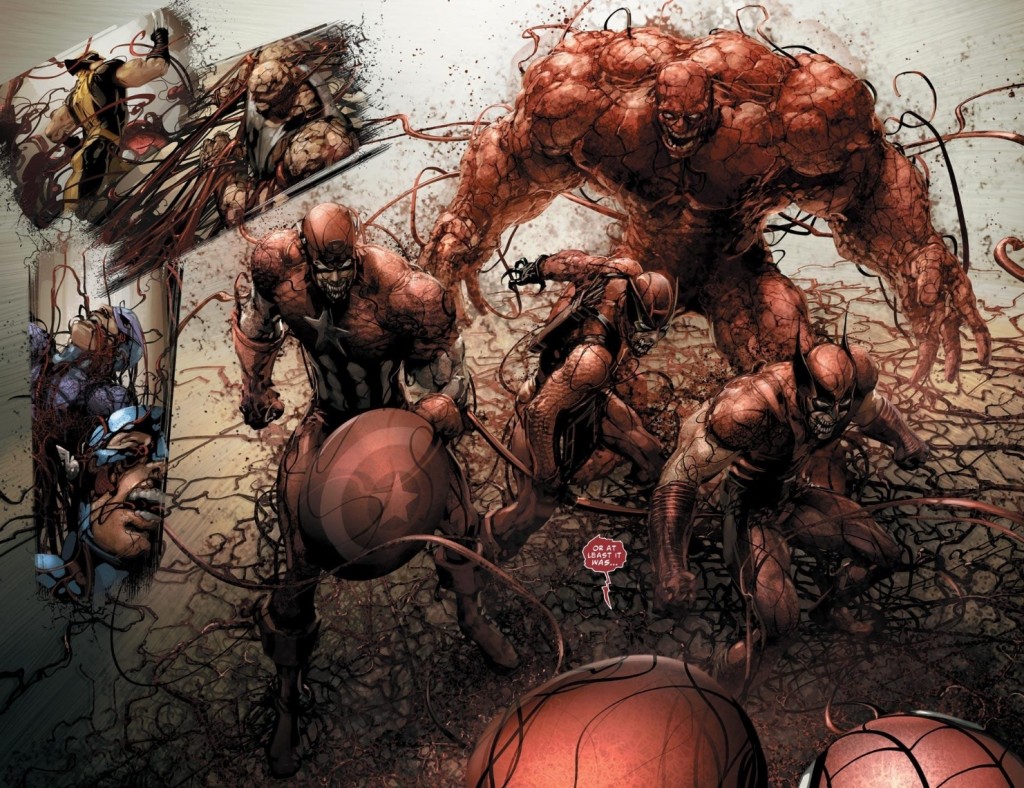 I’ll definitely stay up-to-date on this series, for the Wells dialogue alone, but if I find myself being a broken record about the content after a few issues, I’ll probably cease putting up new posts about it. I don’t want to offend the symbiote-obsessed contingent of my site’s fanbase (you know who you are).