I know I’m hardly writing enough lately to dedicate one entire post to non-ASM comic, but given my adoration for what Rick Remender accomplished during his run on Venom, which recently ended at issue #22, I thought it was necessary to dedicate some internet space to the topic.

What was so remarkable about Remender’s work was that he managed to reinvent two critical supporting characters in the Spider-Man universe in one fell swoop – Flash Thompson, the clichéd high school bully who over the past 50 years of comic book history has at least developed some nuance depending on the creative team; and of course Venom himself, a character that really had devolved over the past decade into a one-note villain after starting his fictitious career with a bang in the late 1980s. 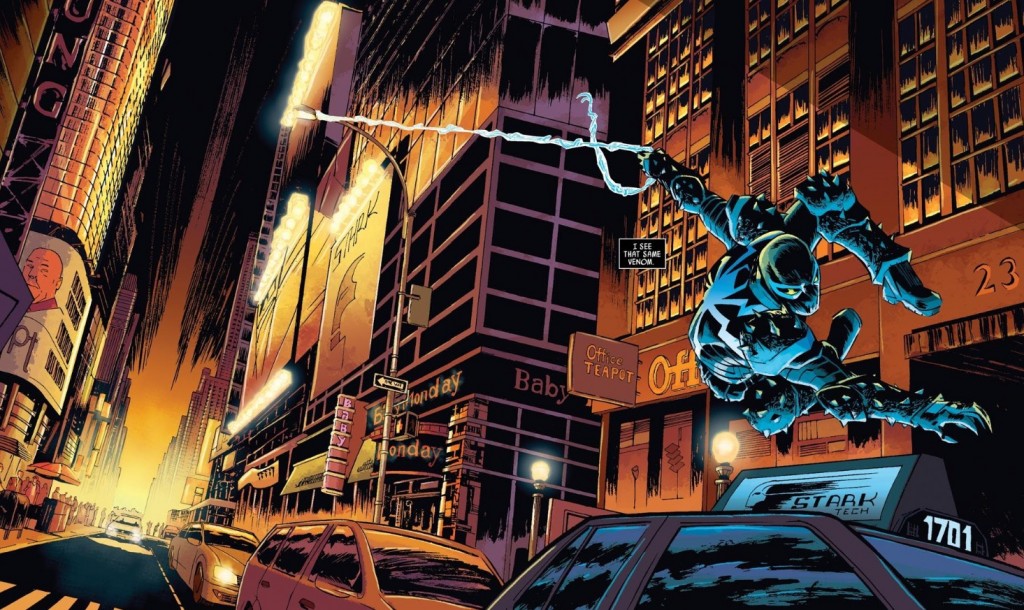 Let’s start first with the titular character in Venom. As I’ve mentioned before, the character means a lot to me personally since he was the first major Spider-Man supervillain Marvel introduced as I was first getting into Spidey and comic books. Maybe because my tastes were much simpler then, but the first few storylines starring Venom in the ASM universe are among my favorite, and I even have a soft spot for his multiple appearances heading into the mid-1990s. While I’ve long maintained that the “epic” Maximum Carnage crossover was a bloated mess, the decision to turn Venom into more of a “tweener” character was something I always loved about the arc. In summary, I’ve long maintained that Venom was the best villain to be introduced in the Spider-Man universe since the inaugural Lee/Ditko run of the 1960s. 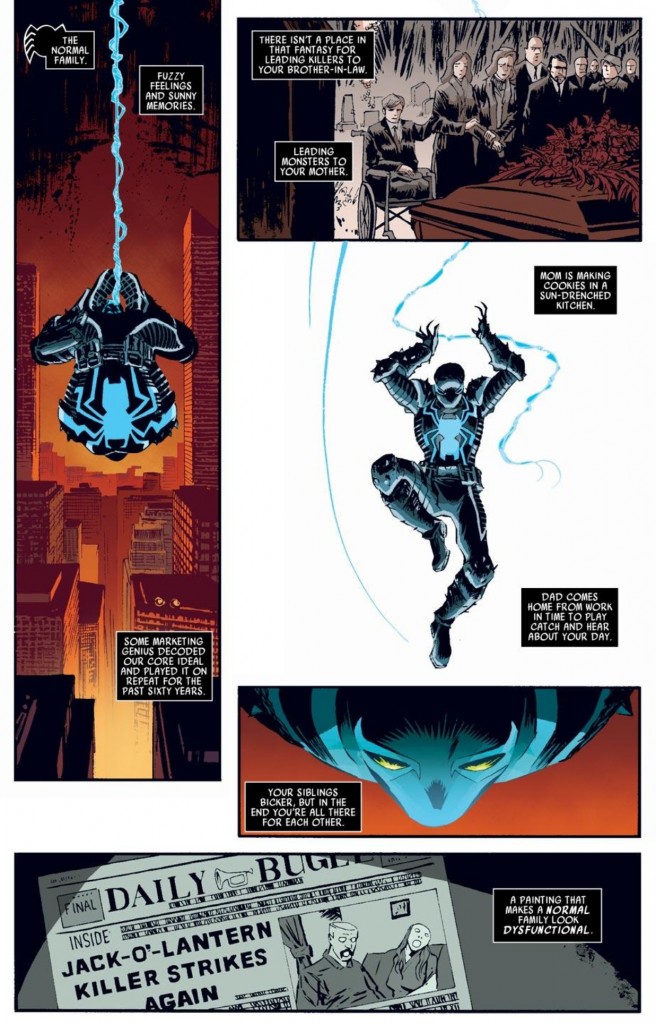 But my love for the character faded when Venom became less and less human, and more comically animalistic, talking about things like eating brains. Giving the “host” of the Venom symbiote, Eddie Brock, cancer in later storylines was a little too morbid for me for reasons I can’t exactly pinpoint, but I feel regardless. Having Mac Gargan/Scorpion take on the symbiote just felt like a cheap reinvention of an otherwise B-List Spidey villain who couldn’t get any traction any other way. You add in the deplorable portrayal of Venom by Topher Grace in the Spider-Man 3 movie, and you just have a perfect storm of reasons why the character lost favor with me. 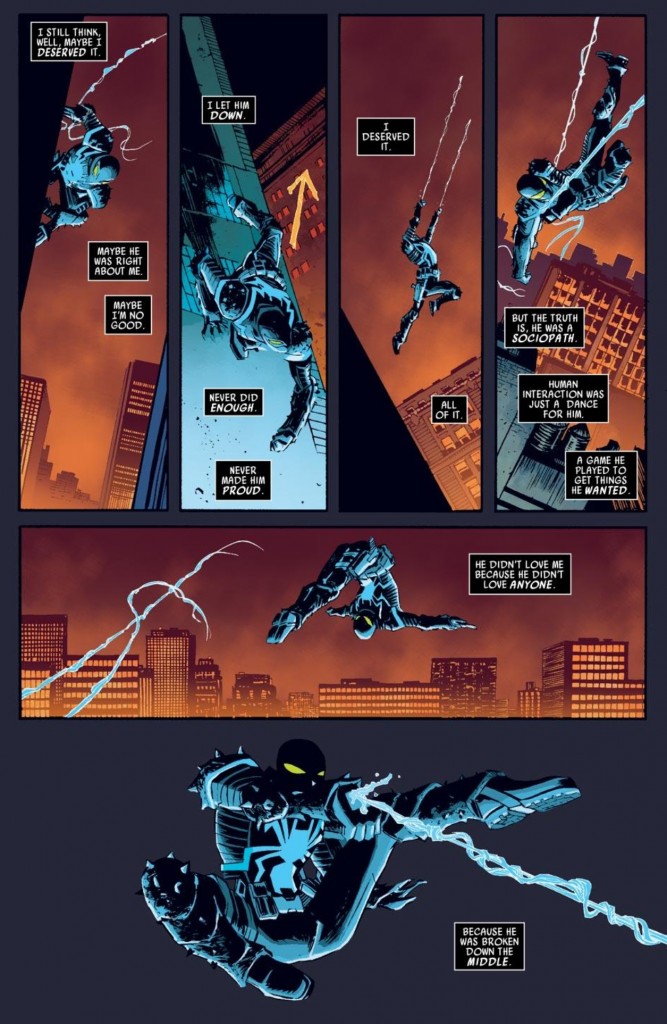 Meanwhile, never in a million years would I have predicted that a character like Flash Thompson was capable of carrying his own title for more than a few issues, and the fact that the premise for Remender’s Venom was to merge Flash with the symbiote, I just pegged the series to be another cheap reinvention a la Scorpion-Venom. I ignored the first two issues of the series, and scoffed a bit when I noticed that issue #2 paid homage to the ASM #300 cover (“boy, they are desperate” I think I said to myself). But when checking out the previews for issue #3, I saw that a confrontation with Spider-Man was on the horizon, and it made think that if Marvel was serious about playing with Flash’s relationships within the Spider-Man universe in the Venom series, then maybe it’s something I should at least check out for a few issues. 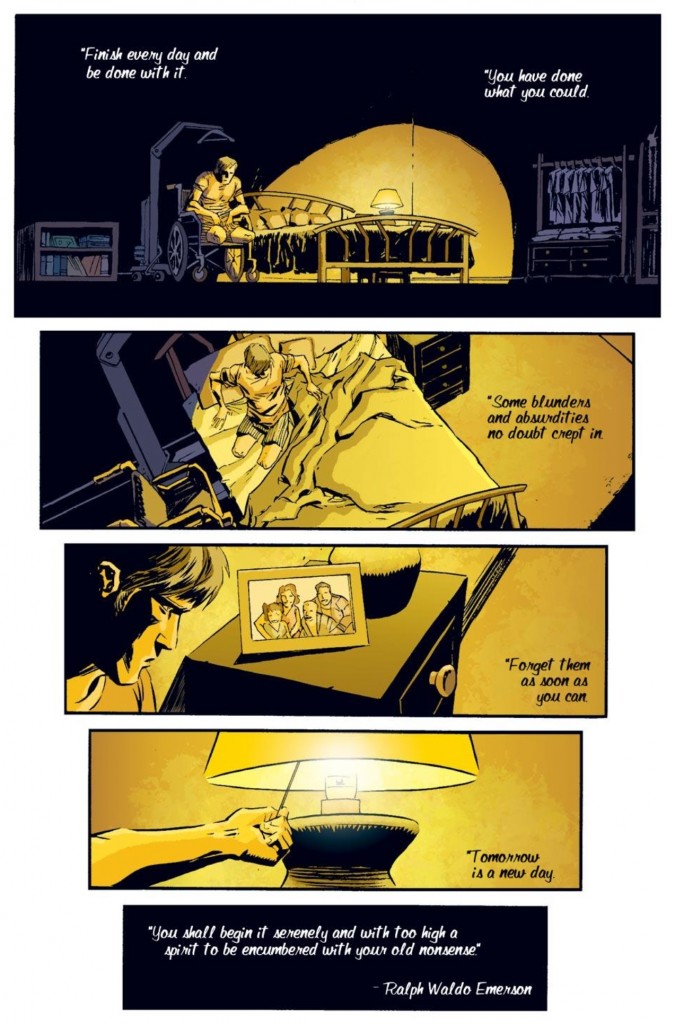 Those few issues became every issue, and even when I haven’t been totally enthralled by a certain storyline (Circle of Four comes to mind, which wasn’t even a Remender brainchild), I’ve at least appreciated the marriage of the two characters. Giving an emotionally unstable character in Flash access to the Venom symbiote was a completely believable way to introduce conflict from a storytelling perspective, and even after I was initially skeptical about Venom-Flash becoming a member of the Secret Avengers, I eventually forgave and forgot about all that because I was more immersed in watching Flash’s own demons become further warped by the temptations of the symbiote.

Suffice to say, I’m disappointed that Remender has left the title, and while I know I can still find his work on other Marvel comics, including Secret Avengers, I just don’t know if I’m as interested in his work when it’s not centered around his incredibly intelligent and clever reinvention of an old favorite character of mine.