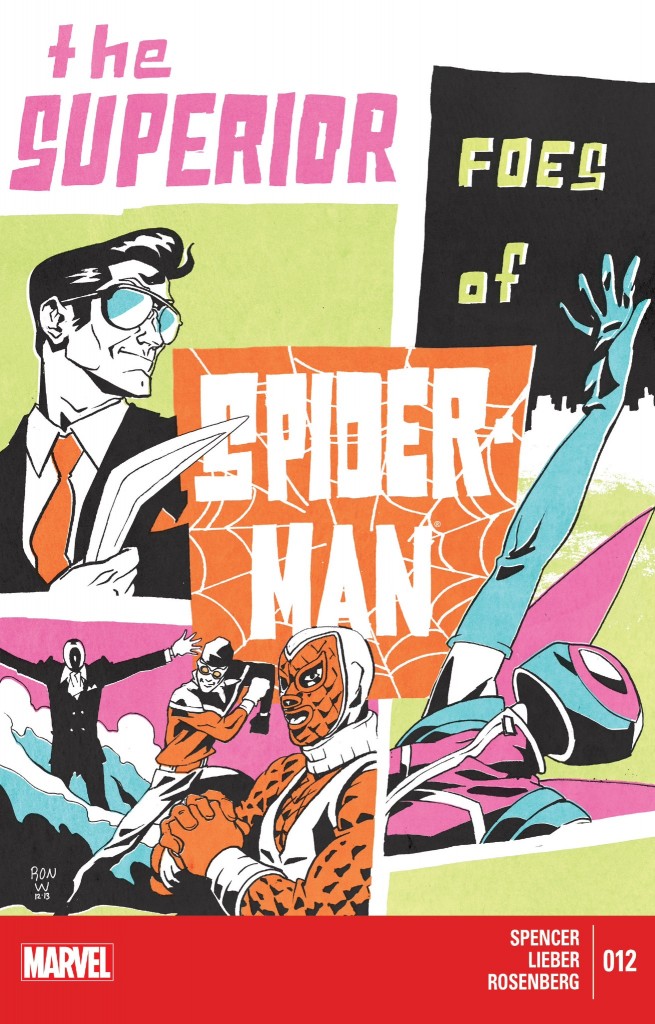 The last time I talked about the Superior Foes of Spider-Man, I was none too happy about back-to-back “filler” issues that neglected to advance the overall Boomerang-led caper plot and instead featured less interesting, one-note characters like Overdrive, Speed Demon and Grizzly.

That was two whole months ago – a lifetime in the world of comics. The lag/delay between issues of this series was just another thing that concerned me about the future of Superior Foes. Before cracking open issue #12, I legitimately wondered if the book was going to finish out its last few issues with a bang, or an editorially-mangled whimper.

Then, over the course of one panel – the opening splash page to Superior Foes #12 – all was right in the world again. When this series has its “A” creative team of Nick Spencer and Steve Lieber, and keeps its focus trained squarely on Boomerang and the crew, I can’t think of another comic I’d rather be reading right now. 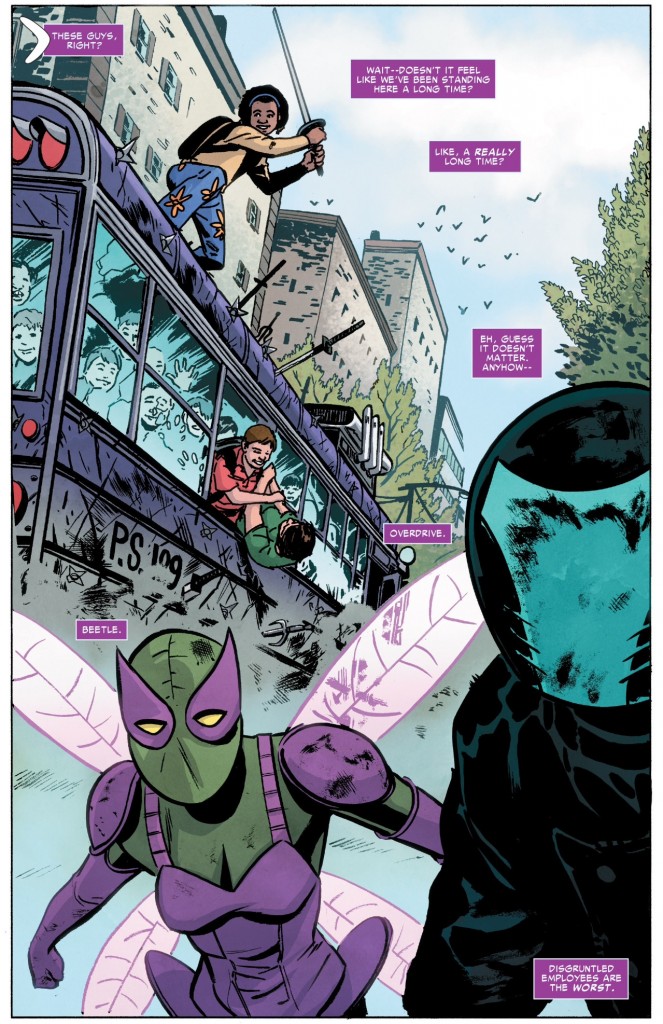 But seriously, opening with such a dynamic splash page featuring a Boomerang narrative that reads “doesn’t it feel like we’ve been standing here a long time?” is the perfect amount of wink-winking from Spencer and Lieber that quells my disappointment and frustration that built up over the past few months. This image sent a signal that I’m allowed to just relax and enjoy this phenom of a comic again.

There are still conflicting reports about whether or not Superior Foes has a lifespan past issue #15 this summer, but based on the fact that the title is barely selling 20,000 books, I’m guessing no amount of praise and begging from enthusiasts like me is going to convince Marvel to continue a series that, based on the premise (a book led by Boomerang?), the company was probably hesitant to publish in the first place. 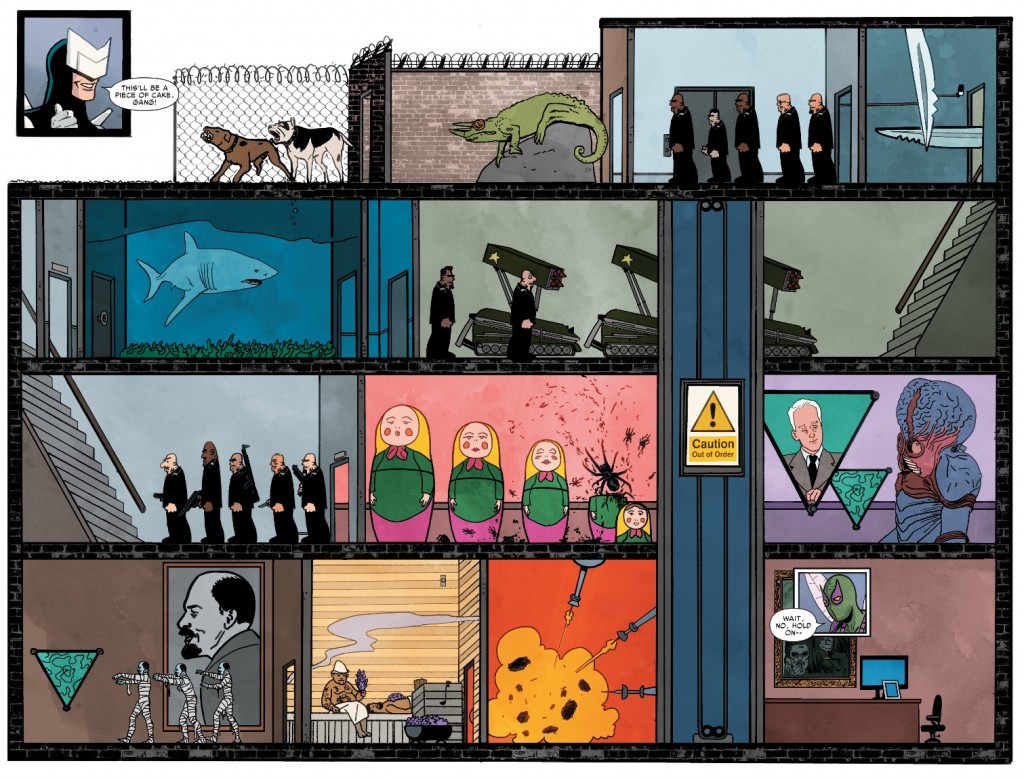 So rather than concern myself with things I have zero control over, let me at least continue to honor this series (and by this series, I mean THIS series – the way it is presented in Superior Foes #12, and pretty much every other issue outside of #10 and #11) the only way I know how: with some rambling thoughts on a blog!

Superior Foes #12 is actually a true highlight for the series, which is akin to me trying to pick which one of Baskin Robbins’s 31 flavors is the absolute best (ok, ok, it’s jamocha almond fudge). In all seriousness, Spencer and Lieber use the lengthy-gap from our last adventure to introduce a tremendous amount of plot development, most notably, Boomerang and the crew actually succeed in their mission for a change (though, we also learn that, once again, Boomie is the master of misdirection and the maskless portrait of Victor Von Doom that he’s been asked to steal back from the Chameleon for the Owl is actually a fake and there’s ANOTHER prize he’s after).

And how can they lose when they are backed by the worst assemblage of villain talent since Carnage’s stable of lowlifes in “Maximum Carnage?” Ladies and gentlemen, it is the Sinister Sixteen! 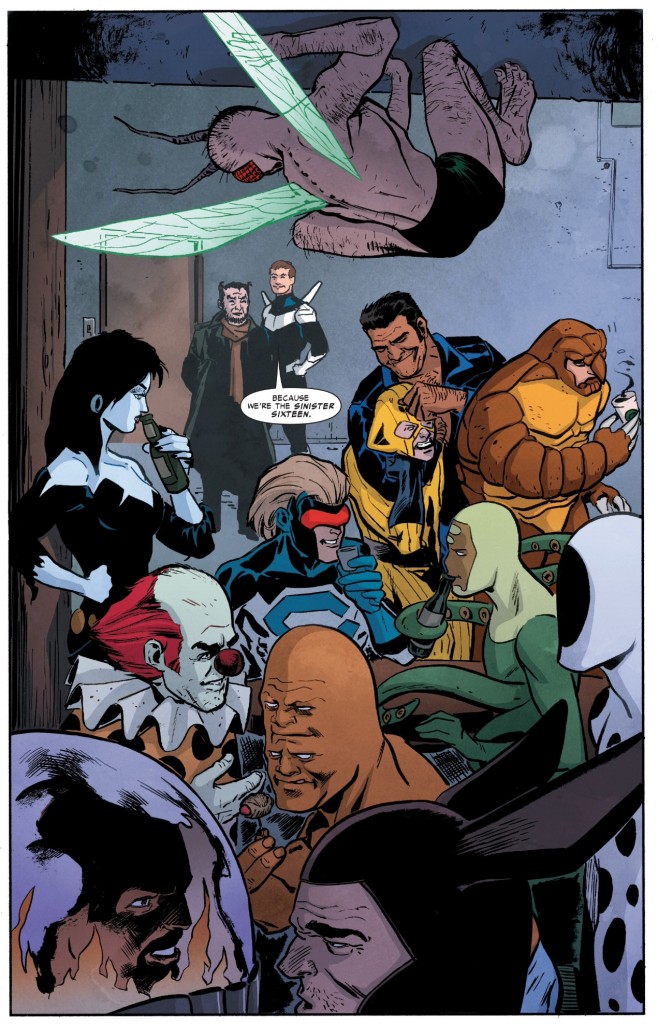 I’ve been saying since pretty much the beginning of this series that as much as I love all the funny character moments (in this issue, we have Boomerang giving himself Jason Bourne’s origin story), that this title really does need to move things forward in terms of its plot or it risks being a book only of one-liners and sight gags. There’s actually been a fairly concerted push to do that since around issue #8 (the last two filler stories notwithstanding), but outside of the cliffhanger involving Boomerang’s subterfuge, Superior Foes #12 does have an “end of the arc” feel to it, while also moving some pieces around the game board to set up (assumedly) the final batch of issues of the series.

One of those pieces being moved around the board is the one member of Boomerang’s crew that’s been operating outside the periphery for a while now: Shocker. Spencer and Lieber end Superior Foes #12 by putting Shocker in a very interesting place – tired of being verbally abused by the robotic head of Silvio Manfredi, he shoves the thing in his bowling bag (smells like buttcheeks) and vows things are going to be different. 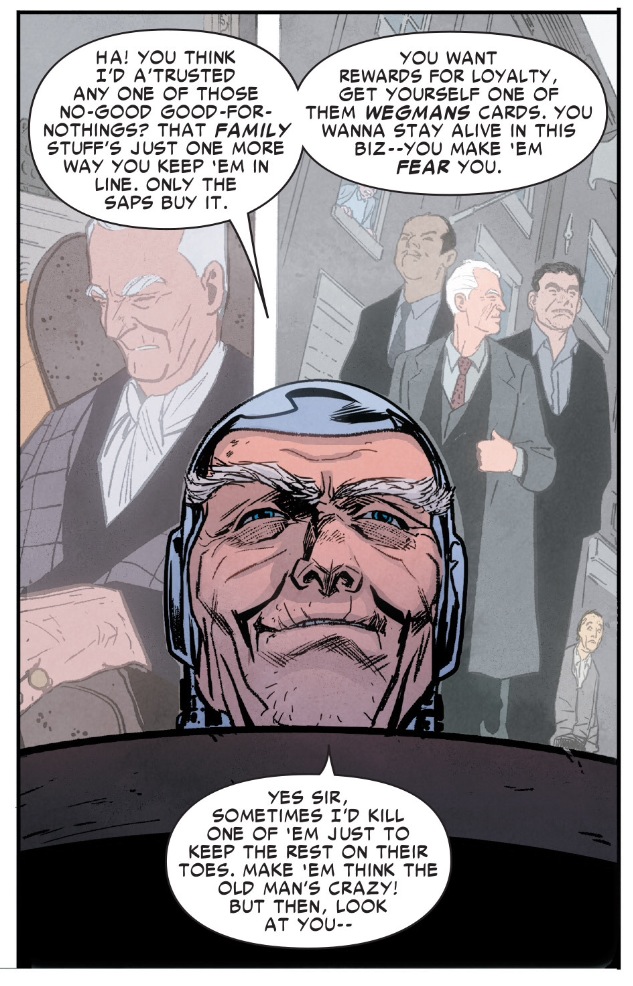 Of course, the best laid plans of Shocker might end up in ruin as soon as next month (or whenever issue #13 is due to be published). But I think longtime Spider-Man fans who regard Shocker as a somewhat respectable villain (no one is mistaking him as an “A” or “B” lister, but he’s always carried more clout than some of his “Sinister Six” teammates) have been waiting for this character turn for quite some time. The Shocker as a coward meme only had so much juice, especially since the last few issues have gone to great lengths to also present Speed Demon and Overdrive as wimps as well. I just hope Shocker gets a chance to shine before Hammerhead and the Maggia inevitably get their hands on him.