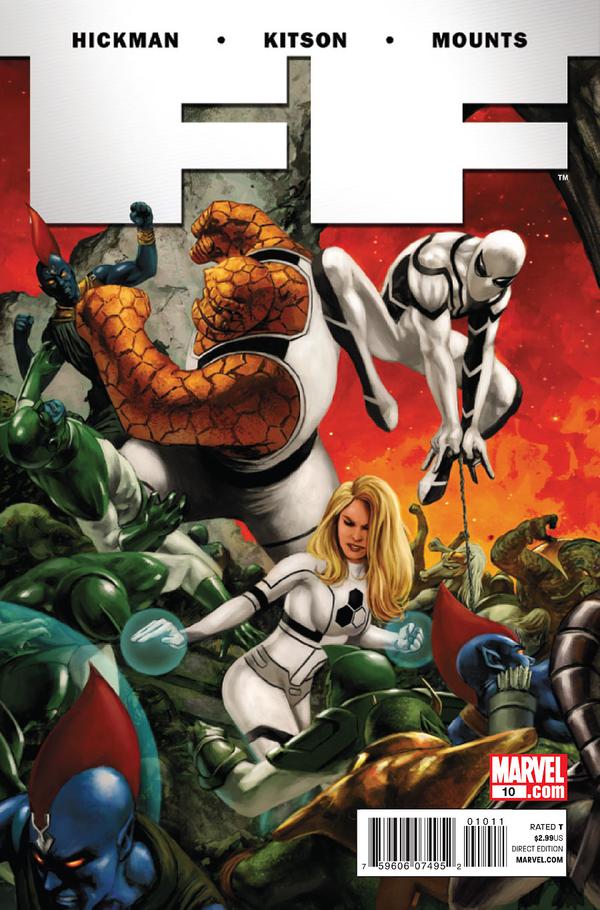 I haven’t written about this series in a long while and considering this is a Spider-Man site first and foremost, it’s with good reason. With so much of the title’s focus on multiple Reed Richards from different multiverses, and characters who rarely, if ever, make their way into the Amazing Spider-Man universe like Black Bolt, there hasn’t been a heckuva lot for me to opine about in a Spidey-centric way. Considering how excited I was when Marvel first announced that Spider-Man was going to be replacing the deceased Human Torch in the Fantastic Four/Future Foundation, having nothing of note to say about this series has been a major disappointment for me as both a blogger and collector, but since I subscribed to FF for the year, I’ve been pushing onward, waiting, hoping for a moment for Spider-Man to shine.

And yet again, I was let down. As FF #10 picked up where #9 left off, I thought writer Jonathan Hickman was finally going to come through for me in a big way. Reed, Nathaniel and Spidey have all entered a portal that would take them to where they “need” to be. From Spider-Man’s perspective, I thought the possibilities were endless. Would he go back to New York City to help the city overcome the Spider Island menace (it’s not like Reed hasn’t played a major role in Amazing Spider-Man since the storyline started)? Would Spider-Man “need” to go visit his Aunt May or some other loved one like Mary Jane to remind him of what he’s lost in the past? Would Spider-Man “need” to go somewhere as physically far away from the Future Foundation as possible, since he’s already way overextended as a superhero? OK, maybe that last one is a bit selfish on my end (can Marvel please just drop Spidey from all of these other superteams?). Either way, with a set-up like that, I was expecting Hickman to create a major character moment for Spidey, since he’s had so very few since FF started. A moment that would be a tip of the hat to Spider-Man fans who gravitated towards this series when it first debuted earlier this year, and bumped its sales. And instead, we have Spider-Man going back to the Baxter Building to annoy the Thing. 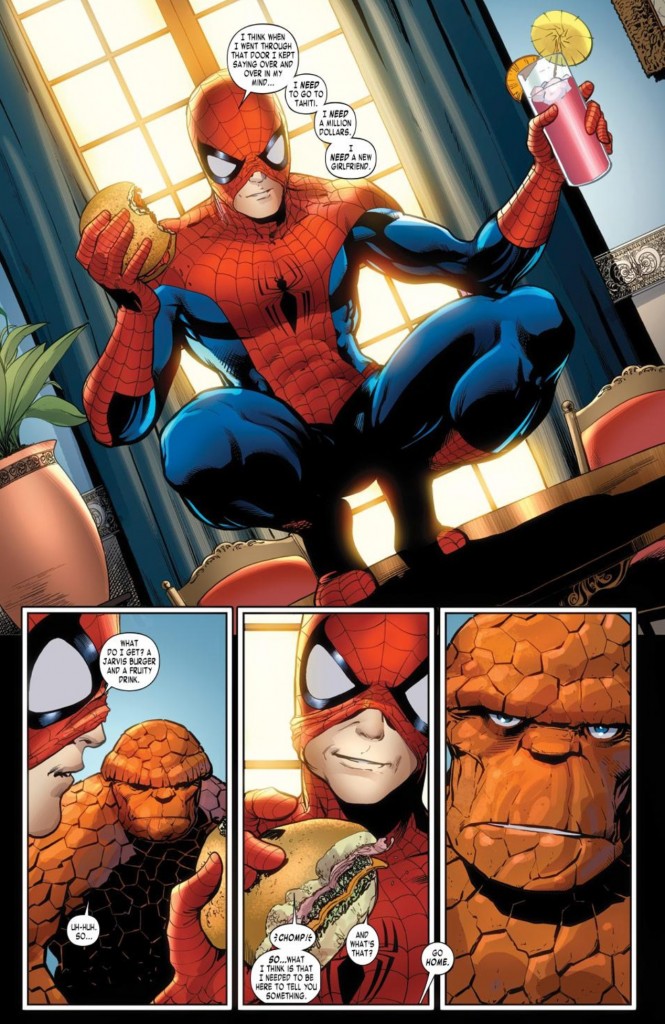 I understand the need to have Spidey fill the void of Johnny Storm/Human Torch as the youngster “comic relief,” but Hickman has been dropping the ball with Spider-Man’s role in this title since the very first issue. Spidey is a complex character, who’s more than just quips and one-liners. Under the mask, he’s a very intelligent scientist, as well as a very passionate and protective individual who is driven primarily because of all the mistakes he’s made in his past. To continually treat him as an afterthought just feels criminal.

Totally speculating here, but the way Spider-Man has been “written” into the first 10 issues of FF leads me to think either of these two things is possible: Marvel forced Hickman to include Spidey in the new line-up in an effort to boost sales, or Hickman has no clue and has conducted zero research about the Spider-Man character. Considering many comic book fans treat Hickman as some kind of superstar, I’m leaning against the latter. That still doesn’t change how incredibly frustrating this series has been for me as a reader.

As time marches closer to the end of my subscription, this entire FF experience reminds me of some big intellectual movie, that generates a ton of praise from critics for being so thought-provoking and visually stunning – but when someone who just hasn’t had a full jug of the kool-aid yet watches it, they think it’s a convoluted mess that says nothing of merit. I’m sure a lot of people said the same thing about JMS’ run on Amazing Spider-Man 10 years ago – what’s with all the Spider Totems and stuff? I happened to love it, but I get where others prefer the less intellectually-dense Spider-Man from the Lee/Ditko years. Hickman is just not doing it for me. He’s rolling out a very dense, character-heavy story that has seemingly been stuck in park since the first issue. I don’t expect an explosion or a fight every page, but I wish just something – a little bit more – would happen on the page to suck me into this story. Instead, I’m just reading these issues hoping and praying that somehow Spider-Man does something where I can smile and think I got my money’s worth from the title.

I’m planning on buying Fantastic Four #600 when it comes out later this month, more out of curiosity than anything else. But unless something very dramatic happens in the next two issues of my FF subscription, I expect that I will be retiring this title from my collection and not looking back. I’ll let the Hickman disciples tell me what a great sci-fi masterpiece I’m missing out on.