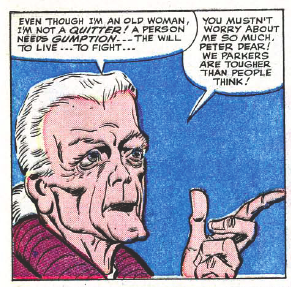 Because I recently picked up a copy of Amazing Spider-Man #18, and because I know there’s one specific Chasing Amazing reader who’s a big fan of this panel, I thought I’d highlight this specific exchange between Peter Parker and his Aunt May for today’s “Reading Experience” installment.

It truly is a fantastic scene from the early Stan Lee/Steve Ditko run and is a perfect example of why Spider-Man has attracted so many devoted followers the past 50 years. In Spider-Man, Lee and Ditko created such a uniquely deep character with real emotions and flaws. And not only did they manage to make readers care about the titular character, but the supporting cast as well.

Prior to ASM #18, Aunt May seemed to come across as more of storytelling device than an actual layered character. Many of the early Lee/Ditko issues seemed focus on Peter’s overwhelming concern for his elderly, frail aunt. Whenever Peter/Spider-Man needed a personal crisis to distract him from his superhero work, May could just be stricken ill and hurried to the hospital, which is precisely what happened in ASM #17, causing Spidey to distractedly run away during a battle with the Green Goblin and being labeled a “coward.”

Peter’s struggle between being Spider-Man, or just being a regular teenager who needs to care for his aunt, and have a semi-normal social and professional life, has long been a central theme in ASM and while issue #18 is the official first of many occasions where Peter vows to dump his Spidey suit and become a real person again, the resolution of this specific personal crisis is ranks among the best during the comic’s history. And it’s all because of Aunt May.

When Peter comes home and is shocked to find May walking around after being stricken ill just days earlier, her response about “not being a quitter … We Parkers are a lot tougher than people think” (which, need I remind fans of the Spider-Man 2 movie, is very reminiscent of May’s “I believe there’s a hero in all of us” speech to Peter), is what ultimately inspires Peter to don his spidey suit once again and get back to doing what he was destined to do – be Spider-Man.

I find it absolutely remarkable that Lee and Ditko chose the elderly aunt as the character to smack Peter out of his downward spiral, and in the process, May became firmly entrenched as a character readers needed to care about. I mean, if it wasn’t for her spirit and spunk, Peter may have quit being Spider-Man for good – how can you be a fan of this comic book and NOT love her after that! It was also a brilliant maneuver by Marvel because when they kicked off the “if this be my destiny” storyline a year later, Peter’s determination to find the serum to save his Aunt May became that much more critical, because you not only cared about Spider-Man succeeding and being the hero, but you were also rooting for the improbable survival of a character who had a profound relationship with said hero. And while people nearly lost their minds decades later when during the “One More Day” storyline Peter essentially gave up his marriage to Mary Jane to save his Aunt May, such a decision becomes that much more justifiable when you circle back to the roots of the Lee/Ditko era and you see firsthand just how critical May is in the emotional development of Peter and Spider-Man.

The heroes and villains ultimately keep me reading comic books, but I choose Spider-Man because of how the  vital supporting, non-super-powered cast of characters have been drawn and developed over the years. After ASM #18, May was no longer an albatross, but a motivator. To be able to add such depth to an elderly women who could have easily just have been continually cast as a caricature is the epitome of why Marvel really was a groundbreaking, revolutionary comic book publisher and why I’ve remained loyal to them ever since.