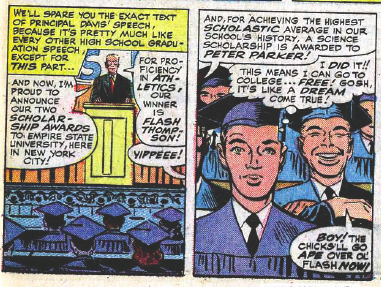 In a comic book, time is infinite. Though that wasn’t always the case.

Take this panel from Amazing Spider-Man #28 for instance. Here, we have a very definitive moment in time in Peter Parker’s life – his high school graduation. Not only is this a definitive moment in time, but it also demonstrates a somewhat concrete passage of time from the first instance readers met Peter Parker in Amazing Fantasy #15 to ASM #28. About two years have passed in Peter Parker’s comic book life – demonstrating a continuum that closely resembled real-time as AF #15 was released in 1962 and ASM #28 came out in 1965.

These are the instances in comic books that really get my brain jogging. What was the original intent of Stan Lee and Steve Ditko? Were we supposed to follow Peter Parker/Spider-Man through high school and then slowly fade to black as he got older? Did Spider-Man’s commercial success alter a planned beginning, middle and end to the comic book life of Peter Parker? And at one point was it decided that time, at least something close to real-time, no longer existed in this universe?

A large part of what made Amazing Spider-Man so successful was the fact that the superhero was a teenager – a character that the bulk of comic book readers could relate to because they themselves were teenagers. Peter’s problems with girls, bullies and family, sandwiched into his full-time job as a really unique superhero, were so realistic, you had to keep reading to find out how it was all going to get resolved. Somehow, I don’t think Spider-Man would be so successful if he was still having these social issues in his 40s. Not to mention the “adult” figures in Peter’s life like Aunt May and J. Jonah Jameson, needed to stick around since they were such vital supporting characters in this ongoing story that Stan and Steve originally crafted. Given how old and frail she was always portrayed, I can’t imagine Aunt May reaching her mid-100s.

Today, anything that “dates” your character in a meaningful way is the equivalent of a four-letter word in comic books. Peter and Mary Jane were married but never had children, because a little web-slinger would have started a clock of sorts within the comic book. When the baby was born, that mean 9 months had passed. If the baby starts walking or talking, that means at least more time had passed beyond that. And if the kid becomes a toddler, forget it – then you’re dealing with the Power Pack.

Of course, Marvel took things a step further when they completely annulled Peter’s marriage to MJ. I think there was an understanding there that a marriage that had existed, in real-time, since the 1980s, needed to progress in some way or it would just become an obstacle for the writers to have to deal with on a regular basis. So it was nixed, and now that element of time, vis a vis, Peter’s romantic relationships, is less important.

But is time such a bad thing? One of the biggest criticisms from comic book readers is that creators are afraid to demonstrate too much “growth” in characters. I’ve been reading Spider-Man comic books since I was 7, but really, how much has Peter grown in that time? He’s had some catastrophic life moments he’s had to deal with, but none of them relate to getting older. I may be speaking for myself here, but I obviously see the world and myself a lot differently at 30 than I did when I was 20. Should we expect that same kind of perspective shift from an aging comic book character?

And while time doesn’t pass, you always get a sense when reading an issue of ASM that the real world is being reflected in some way. Betty Brant was introduced to readers in the early 1960s as a secretary at the Daily Bugle newspaper. Today, she’s writing a news blog. A blog is obviously a very “now” reference. Yet she’s made this transition to the Internet age in a fictional world where it’s only been a few years since she was doing the whole “His Girl Friday” act in 1963.

There’s no use fighting the fact that time will continued to exist on this skewed axis in the comic book world. These moments of vaguery will continue to pass us all by as if they were days and months in real-time. All we have are cultural references that are in some ways more dated than the personal milestones, like a graduation or a child, to remind us that the world we are reading is happening in a time, somewhere. In a place, sometime.