Home  »  Reading Experience   »   The Darkest Timeline: Spider-Men vs. the Sentinels 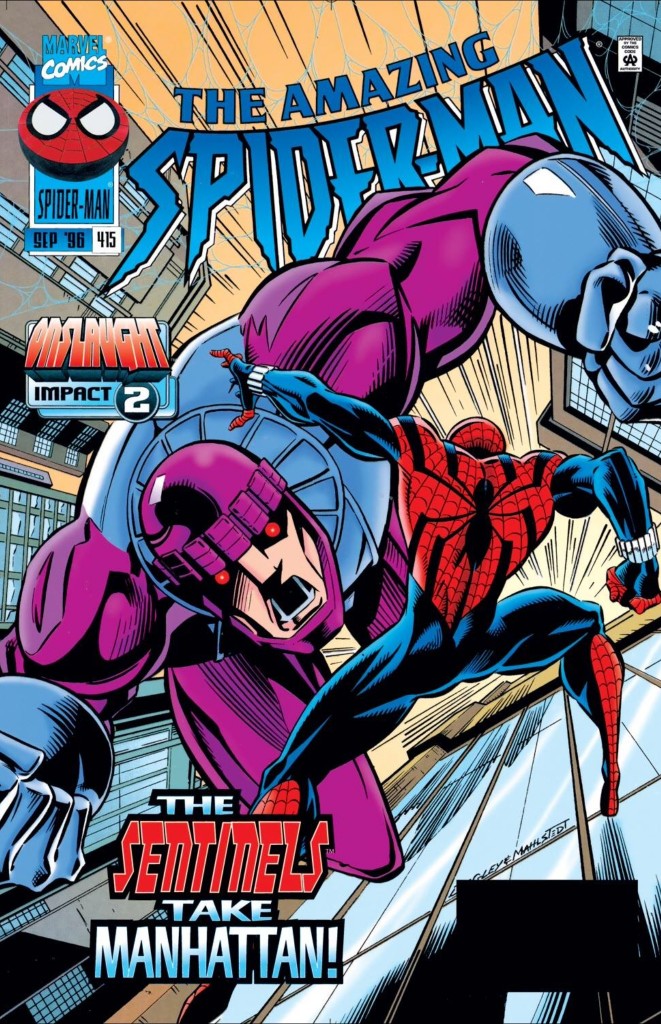 I am nothing if not a slave to tradition. Unfortunately, I had some legitimate struggles this time around trying to tie today’s Chasing Amazing post with the latest Marvel Cinematic Universe movie, X-Men: Days of Future Past.

It’s not that I don’t have plenty of options in terms of X-Men/Spider-Man team-up or crossover stories to look back on, but I was having some difficulty in trying to zero in on something that felt emotionally related to the iconic “Days of Future Past” storyline, arguably one of my favorite non-Spidey tales. “Days of Future Past,” is such a landmark story for Marvel and the overall comic book industry (though the movie will unquestionably take gross liberties with it as part of its cinematic adaptation), I didn’t want to pick some random Spider-Man/X-men comic, jot down some half-hearted thoughts, click “publish,” and walk away thinking my work was done. Here at Chasing Amazing, we never do anything half-hearted (except for when we do – but that’s up to you, dear readers, to figure out).

Part of the difficulty in connecting Spider-Man with something as dark and dystopian as “Days of Future Past,” is that the level of paranoia and political subversiveness the X-Men storyline emotes is rarely found in Spidey comics. Even in his darkest moments (death of Gwen, “Kraven’s Last Hunt, etc.), Spider-Man rarely faces the kind of world-ending stakes that heroes like the X-Men run up against routinely. In terms of politics, even after being labeled a “menace” by the likes of the Daily Bugle and the New York Police Department, a Spider-Man comic rarely reads as politically allegorical as an X-Men comic. 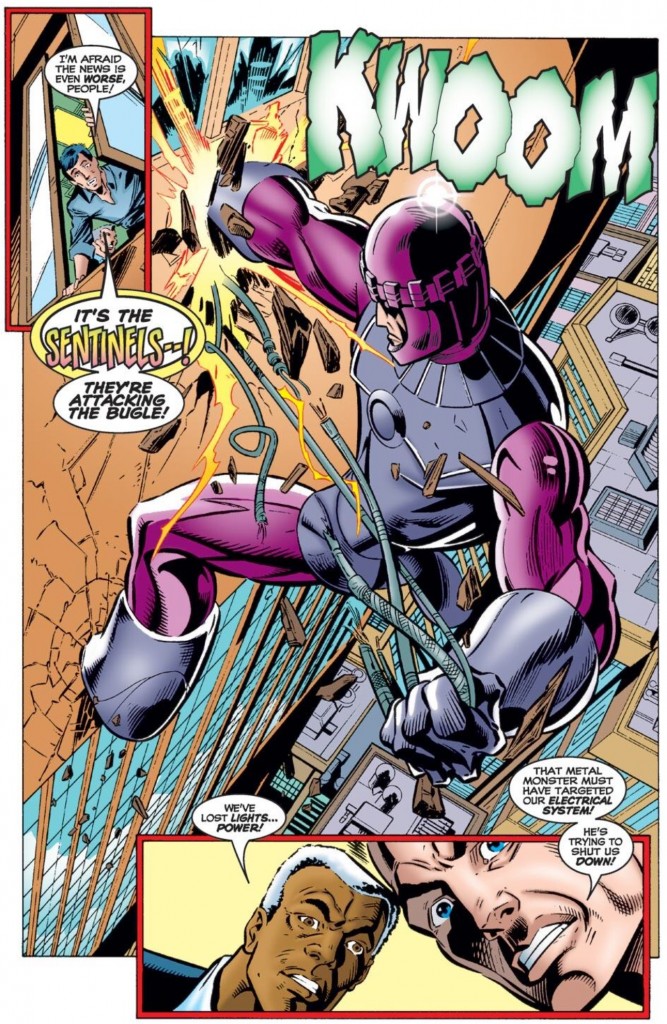 As such, I wanted to write about something that linked Spider-Man and the Sentinels, the government-sanctioned mutant-hunting robots that are the core antagonists of “Days of Future Past.” Having been created during the Cold War-era, the Sentinels perfectly captured the spirt of political and technological paranoia and cynicism that the 60s were famous for. The idea that these gigantic killer robots could be programmed by the government and vaporize a threat without conscious, was straight out of a dystopian nightmare.

In short, Sentinels were terrifying. They might be Stan Lee and Jack Kirby’s most terrifying creation. 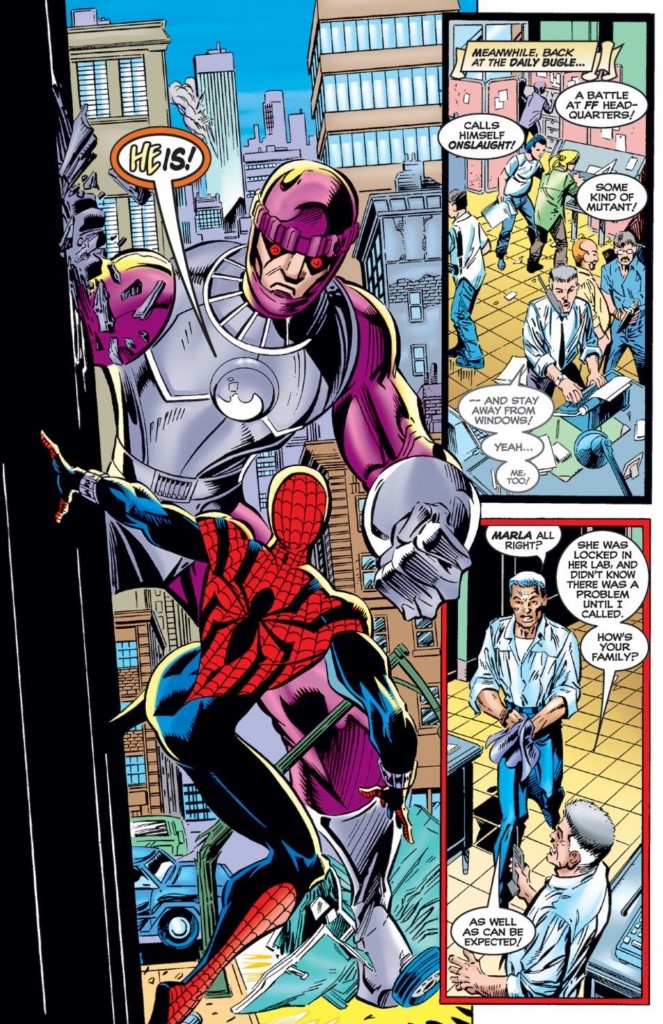 I had already written about the Tri-Sentinel’s attack on New York City as part of the “Cosmic Spider-Man Saga” last year, so I wanted to avoid repeating posts. And that’s when I really started to circle the drain in terms of developing content for today. There’s the “return” of the Tri-Sentinel arc from the early 90s, but so many Spider-Man stories from that era dully blur together that I didn’t want to go through the trouble of trying to “pretend” something was special and unique just for the sake of having a post to put up for today (hence, the “we don’t do things half-hearted” rule).

That’s when I opened up the Amazing Spider-Man series one tab within my Marvel Unlimited app and I was reminded of a two-part 1996 arc in Amazing Spider-Man #415 and Spider-Man #72, which features Spider-Man and his clone, Spider-Ben teaming up together to fight a Sentinel invasion in Manhattan as part of Marvel’s infamous “Onslaught” event.

The storyline mixes two things that have become dirty words in terms of 1990s comics: “The Clone Saga,” and “Onslaught” – so it might seem odd that this was the arc that made the proverbial light bulb up over my head inspire an idea for a post. And yet I’ve never been one to shy away from bucking conventional wisdom. Yes, the “Clone Saga” is considered the creative low point in Spider-Man history, and “Onslaught” was Marvel’s not-so-subtle way of rebooting a number of its core titles (not Spider-Man thankfully) under the banner of “Heroes Reborn” – a sales driven gimmick that saw Marvel reunite with Image artists Jim Lee and Rob Liefeld in order to reimagine the origins of the Avengers and Fantastic Four. But this Spider-Man “Onslaught” tie-in actually has some interesting things worth talking about, plus its darker than usual tone (for Spider-Man) makes it an appropriate choice for “Days of Future Past” tie-in. 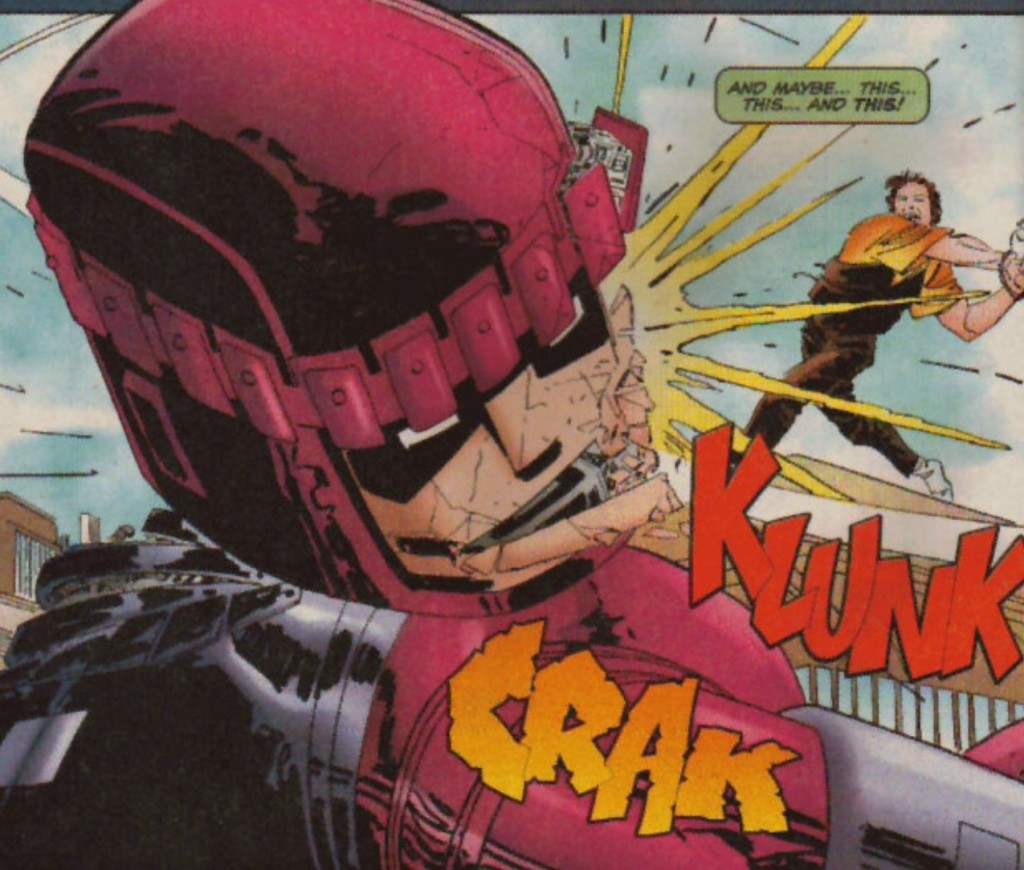 The set-up of this story is shockingly straightforward: the Sentinels have overrun Manhattan in order to snuff out any mutants and/or “enhanced” humans (i.e. superheroes) under the directive of the villain Onslaught (a sentient psionic entity created from the minds of Professor X and Magneto – so maybe not THAT straightforward). This two-parter was published during the period when Peter was under the impression that he was actually a “clone” and had taken a leave of absence from being Spider-Man. In his place was his “clone” now the “original” Spider-Man (but not) Ben Reilly.

ASM #415 opens with Peter and Mary Jane returning to New York City only to find Sentinels standing in the way. Peter takes off to fight the Sentinels and protect MJ, and eventually teams up with Ben to fight off the killer robots. 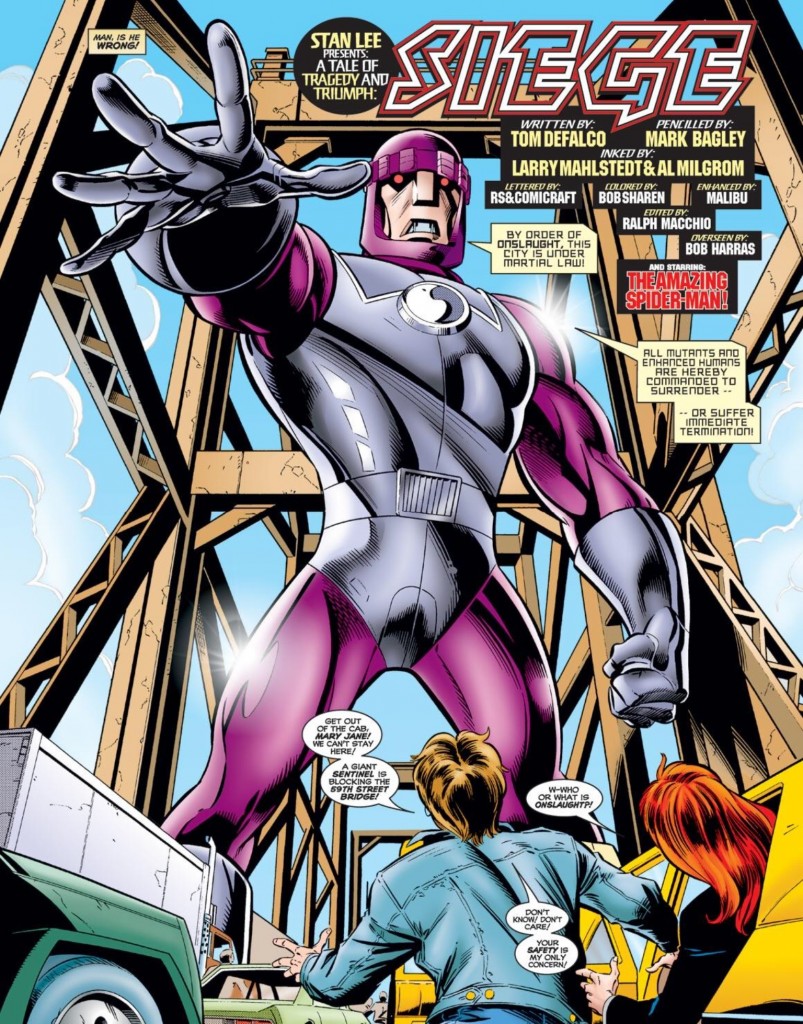 The arc never provides readers with a true resolution – by the time the next issue of ASM was published, Onslaught was dead but not before a majority of the Marvel Universe was killed off alongside him, and the event was over.

But that’s not what’s I ultimately found interesting about the story. In terms of its impact of the world of Spider-Man, these two issues mark the beginning of the end of the “Clone Saga,” which continued for another few months before officially wrapping in Peter Parker Spider-Man #75. The reappearance of Peter and the decision to team him up with Ben for the first time since he quit is quite telling. After keeping Peter and Ben in separate corners for months, Marvel was finally moving forward on once again demonstrating Peter’s superhero side. In one sequence, a Sentinel blast renders Ben unconscious, so Peter, clinging to Ben’s back, guides the two to safety using the clone’s web shooters, showcasing his trademark ingenuity and resourcefulness.

As if Peter’s sudden return to the mantel of superhero-dom wasn’t ominous enough for Ben’s future within the Spider-verse, at one point in the story, the two Spideys actually land inside a smoke stack. Those who remember the original “Clone Saga” from the 1970s will note that Spidey dumped his clone inside of a smoke stack in order to incinerate his presumably dead body. In Spider-Man #72, the use of a smoke stack is an unquestionable bit of foreshadowing from the Howard Mackie/John Romita Jr. creative team.

But back to the Sentinels – the entire point of this post if I’m remembering correctly – they, too, bring an overwhelming sense of foreboding and terror that tips off some of the tragic events that are in store for Peter and Ben a few issues from now. There’s even one scene where a Sentinel scans Mary Jane and finds something “beyond range of embryonic normalcy.” Considering the cruel (and then promptly forgotten) fate of Peter and MJ’s baby vis a vis Norman Osborn in the “Revelations” arc, that might be the most unsettling piece of dialogue in this entire storyline. 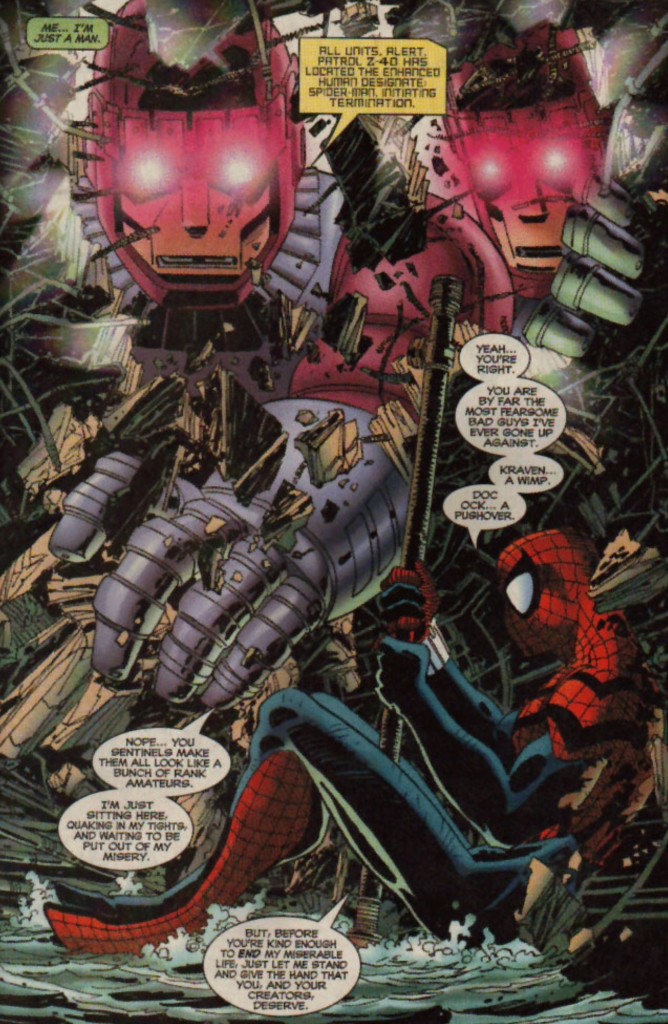 I’m not going to pretend that this otherwise long-forgotten Spider-Man story from the mid-90s is a legitimate match for one of the greatest storylines of all time in “Days of Future Past,” but it does fascinate me how the one thing that actually links these comics together – Sentinels – manage to instantly darken the tone of the Spider-Man Universe. There is desperation and uncertainty on every page of these two comics that is not typically found in a Spider-Man story. Of course, in a few months, we all learned that the Green Goblin (not the Sentinels) was the true harbinger of evil in Spider-Man’s life, but it’s fun to see Spidey playing in the dystopian sandbox with the X-Men all the same.