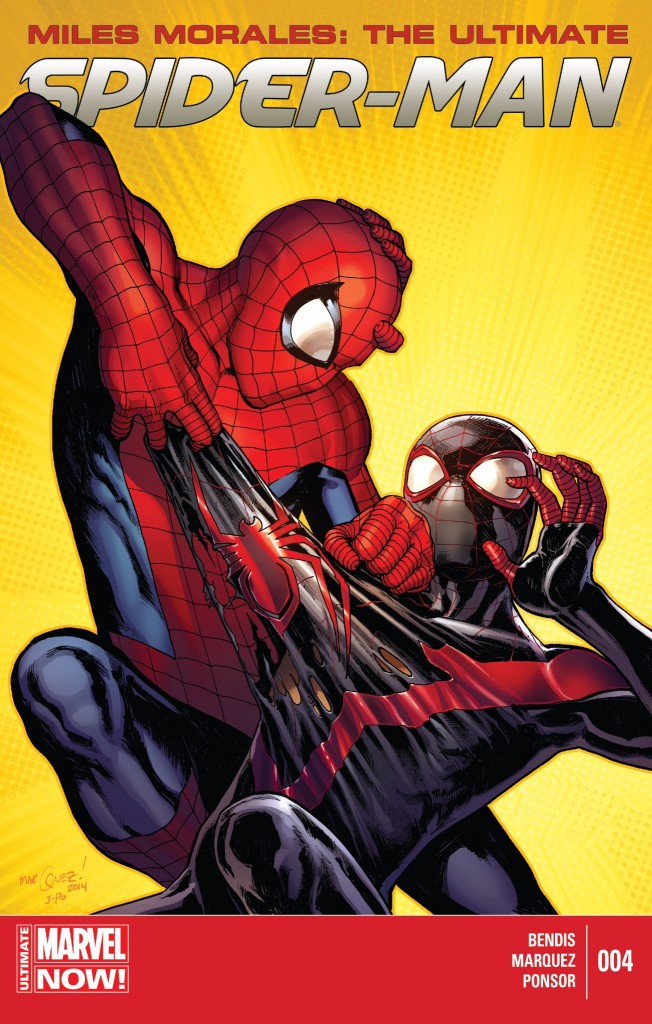 If you like epically staged and beautifully illustrated fights between heroes and villains, Miles Morales: The Ultimate Spider-Man #4 is definitely the comic for you. However, I’m still having a hard time getting too invested in this storyline because of the way Brian Michael Bendis continues to pace things.

And yes, as I discovered from some of your comments the last time I critiqued Bendis’s notorious decompressed style, I know this is nothing new and I should probably just stop complaining and pretending that this is the year 2000 and I’m discovering BMB for the first time. However, that takes away from the bigger point in that Ultimate #4 had some damn good action (and David Marquez’s artwork continues to be outstanding) but I still feel tremendously cheated by the fact that four issues in, the book’s script has done nothing to advance the storylines involving Mile’s missing father, and the two Spider thieves. Has this series even checked in on these guys the past two issues? 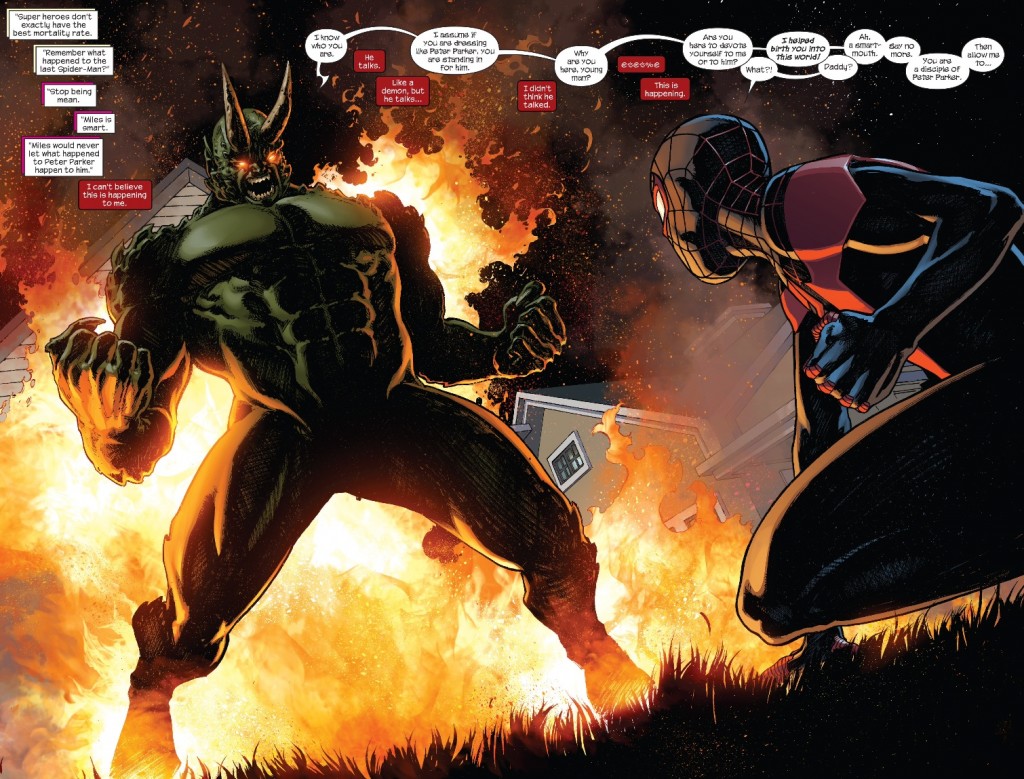 In regards to the storylines that do get some service in this book, I’m at a loss to say if anything has actually developed on these fronts. Katie Bishop runs away from Miles after he admits to being Spider-Man in Ultimate #3, which leads to Ultimate #4 opening with the spotlight on her. But beyond reassuring the audience that Katie is indeed upset about this revelation, the audience doesn’t get any additional insight as to what her reaction could inevitably mean for Miles and the Spider-Man universe as a whole.

Then there’s the bigger elephant in the room which remains the reappearance of the Ultimate universe’s Peter Parker. After getting treated to a round of “clone, clone, clone,” in Ultimate #2, Peter shows up for Miles’s fight against the Green Goblin, drops some vintage quips (and they really were some very good quips), and is seen on television by Aunt May who insists that she’s looking at the REAL Peter and that he’s very much alive. 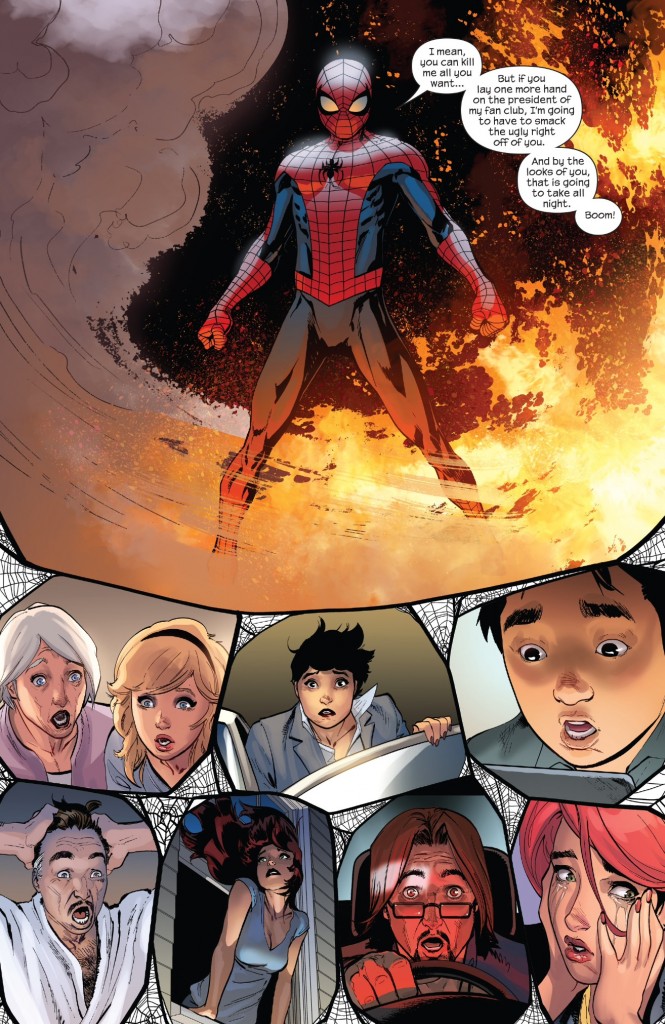 I guess anything is possible, but I still maintain that Miles’s assessment from two issues ago is probably closer to the truth than any other theory (if this Peter isn’t a clone, there’s still something not quite right about him and how he’s conducting himself), so by teasing the alternative – that this is the real deal – this development only functions as to stick the entire narrative flow into net zero territory. That’s not a bad way to unfold a narrative if you’re talking about it being over the span of one or two issues, but again, four issues in, and we still can’t say we know ANYTHING about this character. It’s a storyline that’s being driven exclusively by fan speculation right now, which grows tiresome if you’re spending $4 a month on a product and not feeling all that fulfilled by it afterwards.

Lastly, there’s still this rather cavalier, nonplussed reaction to Norman Osborn’s reappearance in the Ultimate universe, and I continue to maintain that such an approach only manages to undermine the power and emotion of the “Death of Spider-Man” storyline from 2011. Whereas Ultimate #4’s script reads like it is trying to toy with readers’ emotions regarding Peter’s possible resurrection, we are also being asked to just accept that there was some kind of huge cover-up with Norman and that he’s been alive this whole time. I once thought that the “Death of Spider-Man” was one of the few really good “death” gimmick comics out there because of the finality and poetic nature of the story – both Spider-Man and his arch-nemesis fell on the same day. At the risk of sounding like a petulant child who has never read comic books before, with Norman being back, why does the bad guy get to ultimately “win” while the hero is subjected to all sorts of twists and gimmicks? 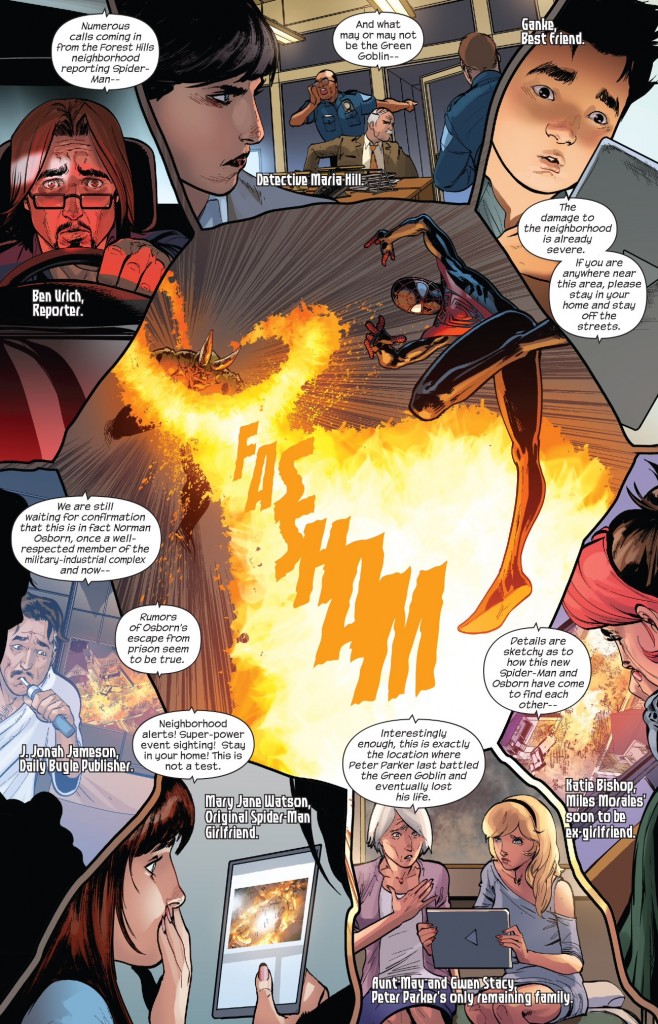 But my paragraphs of complaints are obfuscating the fact that the action in this issue was really, really enjoyable, especially everything that followed Ultimate “Peter’s” return to action and the two Spider-Men teaming up to send the Goblin running for cover. Miles demonstrating just how different his powerset is from his predecessors (the cloaking, the venom sting) was a good little reminder for readers who might have only started checking in on the Ultimate universe when the series relaunched a few months ago.

Meanwhile, the “wait for it” interplay between Miles and Peter after the former administered his venom sting to Osborn, had some fantastic comedic timing to it – a great of example of how BMB’s decompressed approach can actually pay off as the impact of a joke like that could be completely lost if the trigger is pulled too quickly by the creative team. 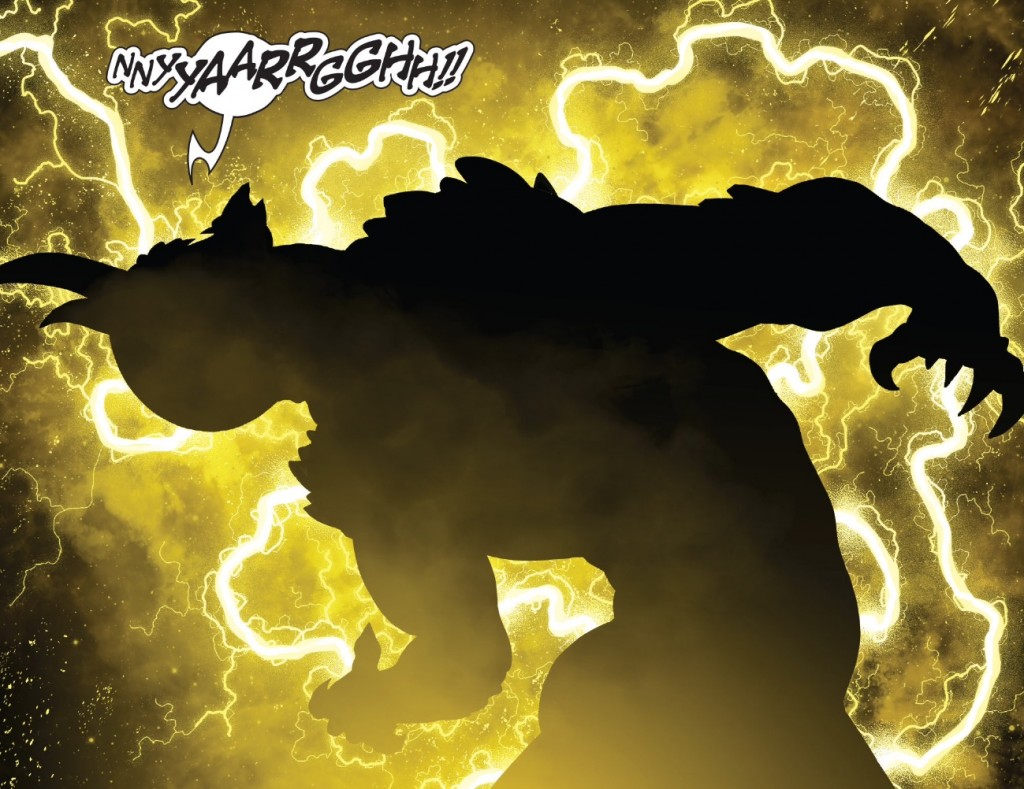 Still, the larger issue for me as it pertains to writing about Ultimate on Chasing Amazing is, to be frank, I am just not having much fun putting together these recaps because I don’t think an average issue gives me enough to break down in satisfying way for the purposes of my personal blog. While I know I’m exposing how the sausage is being made around here, as of now, I intend to follow Miles Morales: Ultimate until this current arc reaches some semblance of a conclusion (based on my experience with this title, it will probably be around issue No. 6 or 7) and then I will probably call it quits (in terms of Chasing Amazing reviews) unless Miles gets roped into the larger “Spider-Verse” arc. With what seems to be about 30 different books all involving the mainstream universe version of Spider-Man coming out over the next few months, plus my desire to keep writing about stories of yesteryear, I just don’t see the value in commenting on the Ultimate side of things issue by issue, especially when I’m fully aware that I tend to enjoy this series more in complete arcs than I do incrementally.