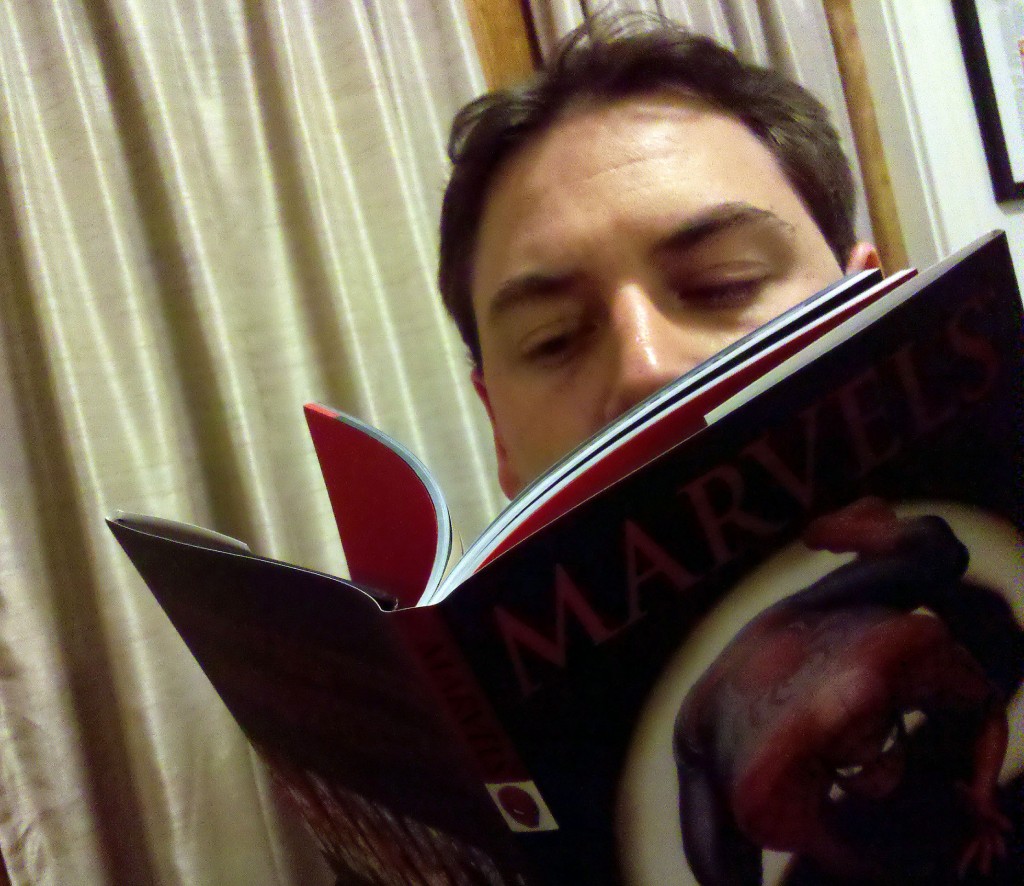 Almost anybody who says they’re a writer will tell you that they are also avid readers. I’ve always believed that they go together – you can’t be a good writer unless you spend a chunk of your free time reading other people’s writing.

I’m most certainly an avid reader. As a kid, I loved books by authors like Beverly Cleary, Judy Blume and E.B. White, but my tastes weren’t discriminating. My mom still tells me to this day that I’d be running late in the mornings before school because I was reading the back of a cereal box or an advertisement insert in a newspaper.

And naturally, I read comic books. While Amazing Spider-Man, or any Spider-Man title really, were my favorites, I read them all. In the basement of my childhood home I kept all of my comics inside of an empty box that had been used to hold a case of wine. That box was so overfilled with comics I had read, or was planning on reading, I had to hold it from the bottom to keep the cardboard from collapsing. That box of comics functioned as my first-ever bookshelf in some ways.

Tomorrow, across the country, comic book stores will be hosting “Free Comic Book Day.” Now in it’s 10th year, “Free Comic Book Day” is fairly self-explanatory – walk into a participating store and walk out with a free comic book. The goal of the day is for the comic book publishers to promote their core titles, while introducing new (younger) fans to the art form of comics. Over at the web site promoting the event, a short video talks about how these free comics can help encourage children to read. While the cynic in me might want to think getting kids to buy more comics in the future is paramount to getting them to just read them, I’m going resist being cranky this one time and instead latch onto the theme of why reading comics is a healthy thing for kids (and adults) to do.

Of course, many people see comics and they think cartoons, which despite the intellect of such animated television shows like The Simpsons, or any Pixar movie from the past decade, still have a stigma of being too childish. I respectfully disagree. While there are certainly scores of comics that feature juvenile, or worse, hyper-violent imagery, there is also a lot of fantastic writing to be found in these comics. Just right now, Superman is in the mainstream news for a politically charged issue of Action Comics #900 where the Man of Steel renounces his U.S. Citizenship because he doesn’t want his actions to be misconstrued as being supportive of U.S. foreign policy. Regardless of which side of the political aisle you’re on, that’s some heavy-duty stuff right there.

As a child, one series that I liked to read cover-to-cover was the Marvel Universe Handbook series.  Released as a series of comic books in the 1980s, together they formed an encyclopedia of the Marvel universe, containing background about a character’s origin, powers, primary adversaries, etc. While I would read my Spider-Man comics to learn about his current comings-and-goings, these handbook entries helped me learn more thoroughly about the Marvel universe.  It’s through these handbooks I learned a lot about some of Spidey’s greatest supporting characters whose stories were told years before I was born like Uncle Ben, Gwen Stacy and Green Goblin. And these handbooks really did read like a textbook – with very officious, essentially analytical writing. But because it covered a subject matter I was highly interested in, it hardly mattered that I was also stimulating my imagination and picking up some high school level vocabulary words at the same time.

These handbooks helped me understand that the world of comic books was also a literary one. The pretty pictures and drawings drew me in, but the stories and the characters got me hooked. And the stories and characters were as enthralling as anything I could read in a more traditional book. In Spider-Man I learned about coping with loss and accepting the consequences of your actions. The struggles of the mutants in X-Men could easily be interpreted as a tale of civil rights. The Hulk was a modern-day Jekyll and Hyde, demonstrating the monsters that are inside of all of us.

Many years ago, when I still believed you had to “give something up” as a personal sacrifice during Lent, per my parents’ request, I gave up reading comics. It was one of the hardest things I’ve ever done, and to be honest, despite what I told my mom and dad, I was unsuccessful. I loved to read, so why would I give up doing something I was so passionate about? It seemed to go against the “spirit” of Lent. But I’m pretty sure my parents wanted me to do it because they viewed comics as a childish waste of time.

Of course it’s important to read books too: and newspapers and magazines. Just read because it makes you a smarter person. Trust me. But there’s no reason why comics can’t also be a part of that repertoire. If you’re not a collector, you can still catch up on most classic comic stories through trade paperbacks and collected editions like Marvel Essentials. Just recently, I was able to get the entire Marvel Universe Handbook through the Essentials series, bringing back some old memories of my 7-year-old self flipping through the biographies and illustrations while lying on my race car bed.

For me, reading was my gateway to collecting. Without the incentive to read all of those stories about Spider-Man, I would have never have had that drive to start preserving these stories for long-term prosperity. I’m the same way with books – if I love one, it stays on my shelf for eternity. My plan is to pass these lovingly-read treasures down to future generations.

So, go to your local comic book store tomorrow and pick up a free comic – and read it. That’s the point. If you got kids, bring them, and encourage them to read their free comics. If you’re anything like me, these freebies will open up a gateway of entertainment that will be enriching for years to come.