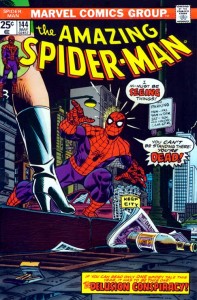 Amazing Spider-Man #144, the second part of the “Delusion Conspiracy” arc which sees Peter Parker and Mary Jane get closer just as Gwen Stacy’s clone makes her existence known, reminds me of another form of entertainment: professional wrestling.

Before your eyes collectively roll so fast they hit the back of your throats, hear me out since this is hardly a revolutionary thought. Throughout my Twitter feed are comic book fans who were reacting one way or another to the events at Metlife Stadium two Sundays ago: Wrestlemania. Obviously superhero comics and pro wrestling have a lot of similarities: both star a cast of defined heroes and villains featuring a wide range of gimmicks. Just like in wrestling, comic books feature numerous heel turns (Cyclops in AvX last summer), face turns (Sandman and Venom) and popular anti-heroes (if Stone Cold just had adamantium claws he’d be Wolverine). And both wrestling and comic books are essentially long-term soap operas that are constantly trying to reinvent the wheel under the guise of being fresh, reach new audiences and market themselves as something that isn’t only consumed and enjoyed by teenage boys.

In my write-up of ASM #143 last week, I referred to this arc’s featured villain, Cyclone, as “lame” and as another example of something that just didn’t work during the lackluster Bronze Age run of Spider-Man. That’s because I just didn’t find anything compelling about Cyclone to as a character. He was a villain with a one-note gimmick: because his cyclone-producing technology was rejected by NATO in favor of American weaponry, Cyclone was the stereotypical American-hating bad guy who vowed vengeance on seemingly everyone from the good old U.S.A. And while I’m far from an overly jingoistic individual, watching Cyclone insult the likes of Spider-Man, J. Jonah Jameson and Joe “Robbie” Robertson as being stupid and ignorant Americans over and over again, just made me want to see the character quickly get his come-uppance so the comic book could go back to addressing the more interesting relationships it had established. 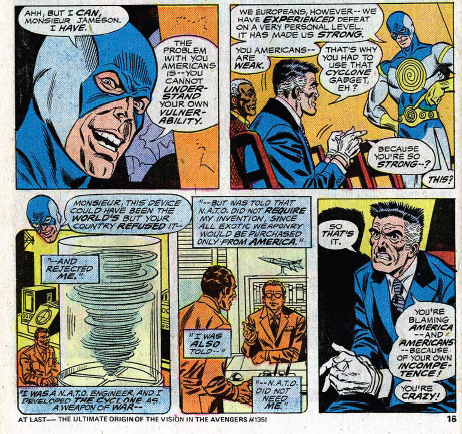 My reaction reminded me of how nearly every “evil foreigner” gimmick introduced in the pro wrestling world in my lifetime never seems to catch fire in a meaningful way, and yet it’s a gimmick the WWE specifically has gone back to countless times. Going back to my childhood, the Iron Shiek was the evil foreigner du jour and yet, who would argue that the individual became far more entertaining as a ranting lunatic in his post-wrestling life? Sgt. Slaughter made “headlines” when he became an Iraqi sympathizer and American turncoat before Wrestlemania VII and yet the character drew much more money when he was an “American Hero,” beating up evil in boot camp matches and making appearances on the GI Joe cartoon. 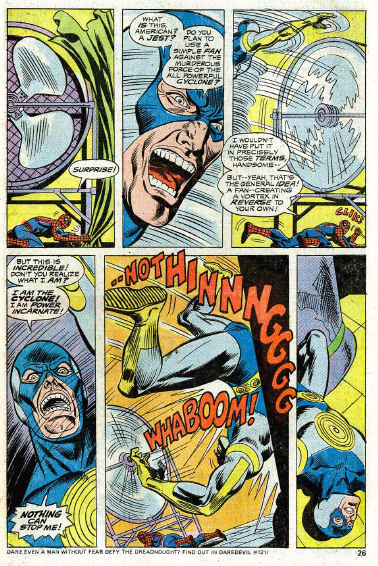 I understand that these villains – in both wrestling and comic books – amount to placeholders in-between larger, more important feuds. In ASM history, Cyclone is introduced on the heels of Harry Osborn assuming the identity of his (then) dead father and becoming the Green Goblin. Following “The Delusion Conspiracy” two-parter is the all-important initial Spider-Man clone arc, which last a few issues and would go on to provide fodder for stories years later. So, while the Cyclone was an unexciting character, he at least gave Spider-Man something productive to do in another country for two issues just like Sgt. Slaughter provided a new feud for Hulk Hogan after he had earlier dealt with more important foes like Macho Man Randy Savage and the Ultimate Warrior.

Of course, what’s ultimately memorable about this specific issue of ASM is Peter’s (and Aunt May’s) discovery of the Gwen clone. And the reason why this is memorable is because Gwen was a character that many readers were conditioned to care about after years of strong story-telling (though, as I’ve said before, Gwen’s characterization got progressively weaker after the death of her father in ASM #90 which more or less necessitated her death in ASM #121 in order for Peter to grow in new directions). 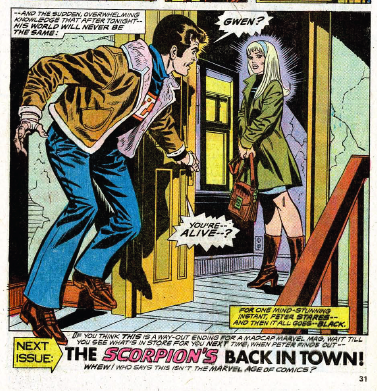 Two quick things related to the Gwen clone. First, for whatever reason, I’ve always found the cover to ASM #144 to be one of the oddest and most ill-conceived in the series history. So Marvel wants to tease the “return” of this character who was shockingly killed and the way they visually do it is to show her quadriceps muscle and the back of a white boot? I just hate it.

Second, I’ve always wondered if the existence of the Gwen clone cheapened or had no impact on Gwen’s death. As I’ve noted numerous times before, characters who have been killed in comic books always have this habit of coming back and thus cheapening their legacies. In Spider-Man’s history, the two characters who have defied this pattern have been Uncle Ben and Gwen. For me, I’ve never viewed the clone as Gwen’s real “return.” It’s a clone. She doesn’t even have memories initially. She’s basically a robot built by the Jackal to fulfill some creepy romantic fantasies he had about the real woman. But I’d be curious to hear what other readers think about this idea.

Circling back to the Delusion Conspiracy arc and the pro wrestling analogies, after reading these two issues, what sticks with me the most is how much more intriguing the “B” stories are – Peter and MJ getting together; the Gwen clone – than the actual “main event” fight against the evil foreigner. To recall my Wrestlemania VII comparisons, Hogan vs. Slaughter was the main event that night, but the most entertaining and engaging match/storyline was the Macho Man vs. Ultimate Warrior retirement match which saw the reconciliation of Savage and his former “woman” Miss Elizabeth. Again, better stories are told with layered, complex characters than with one-note gimmicks. You would think there would be such an understanding of this concept that we would never be subjected to evil foreigner gimmicks in any of our comic books or wrestling programs again, but alas, somebody out there is convinced that one day, they’re going to make a billion dollars off a guy walking around in tights calling Americans “pigs.”