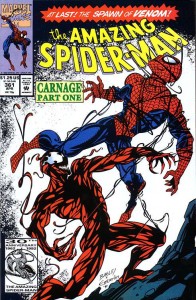 Growing up in suburban Long Island, you’d drive everywhere to get around. But when you’re 14 and bored, and just looking for something to do, you’d walk. For me, those bored, aimless walks would always end at an indoor flea market in Oceanside, NY, called “Goldcoast.” For a 14-year-old with no job and a healthy appetite for Amazing Spider-Man comics, Goldcoast was a destination.

It was a good three or four miles from my house to Goldcoast – an hour and change depending on the pace. There was one specific friend of mine in high school who’d almost always make the trip with me. We ran track and cross country together and his father was actually our coach. So maybe, in our minds, a walk like that was just practice for the following week’s race.

The thing is, this guy didn’t even really like comic books. He certainly wasn’t a collector the way I was. But he didn’t care because the walk to Goldcoast was something that was done to pass time. And obviously there was more to buy there than just comic books. Sometimes, I walked out with a baseball hat. There was one vendor who had posters of every athlete or band you can imagine. He also sold a bunch of band t-shirts. Though you had to be careful with the shirts, because Goldcoast always had a lingering scent of incense and patchouli oil – and maybe some less favorable odors throughout the market. Depending on the proximity of the shirt vendor from the smelly stuff, there was a good chance that you’d be taking those odors home with you. 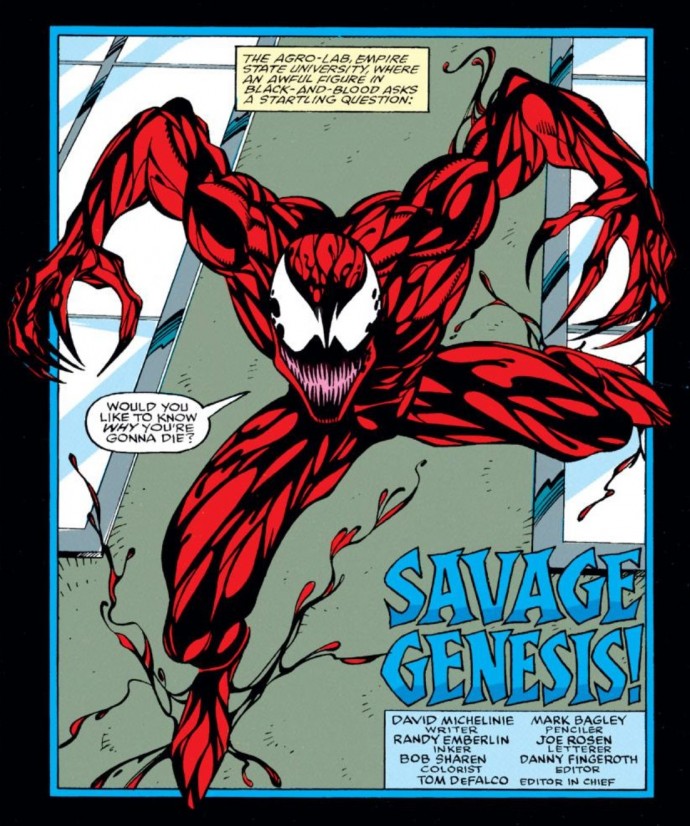 The route we took to Goldcoast was not really the most pedestrian-friendly, but it was the fastest and most direct. We’d pass a KFC where we’d sometimes grab some food on the way there or back. At one point of the stretch, we passed an old landfill that gave off a stench that was part-chemical and part-decay. I used to think it was fertilizer, but I’m sure it was something much worse than that.  In retrospect, I’m sure it didn’t affect the taste of the KFC. 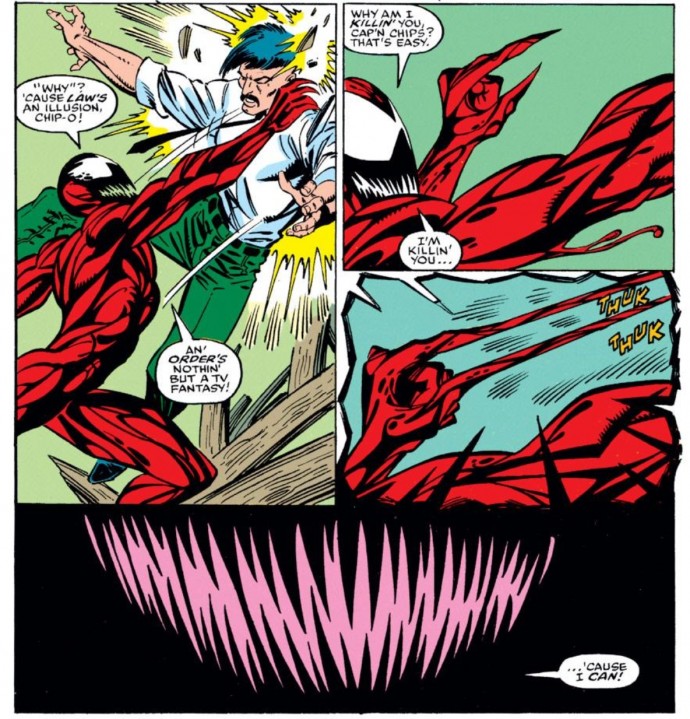 Since we really didn’t have comic books in common, we passed time talking about other things. We used to joke that we had a sixth sense about which episodes of the Simpsons would be played in syndication. We’d quote an episode or two during one of those walks and by that Wednesday or Thursday that same episode would inevitably be on. We’d talk about music. Our tastes diverged as we got older, but I may never have heard Sgt. Pepper’s Lonely Hearts Club Band if this guy didn’t lend me a cassette recording. I can’t even fathom what my life would feel like without The Beatles. 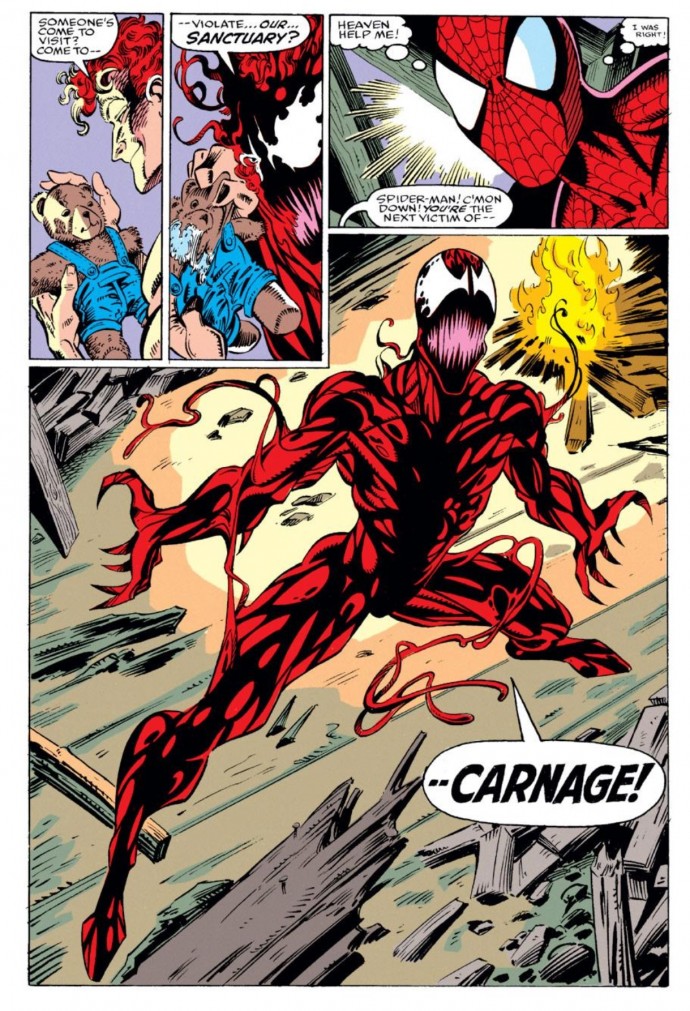 From a comic book collecting perspective, the bulk of what Goldcoast’s vendors had to offer was the usual run-of-the-mill junk – stuff that you could find in the bargain bin at any local comic book shop or trade show. The fact that Amazing Spider-Man #361, the first appearance of Carnage, is far and away, the best thing I ever picked up at Goldcoast, is very telling about the quality of the merchandise. I’ve always regarded Carnage as a one-dimensional, overhyped villain, yet during the 1990s, his first appearance was considered a “big deal.” In many ways it reminds me of the fact that my most treasured baseball card as a kid was my 1984 Topps Darryl Strawberry “Rookie” card. When Strawberry was looking like one of the best hitters of all-time, the card was a hot commodity. As Carnage went on a killing rampage and was the featured star in the Maximum Carnage storyline, ASM #361 was also a big deal. I probably picked this issue up towards the end of Carnage-mania, when most fans were burned out by symbiotes. It was definitely a “buy low” moment for me, though if I had waited a few years, I’m sure I could have bought even lower. 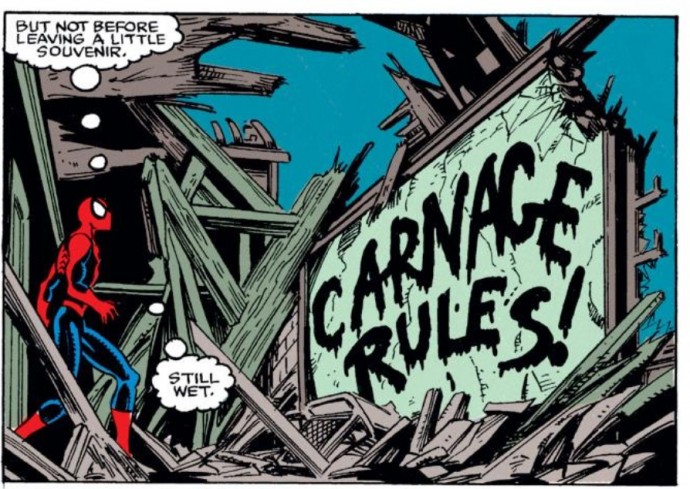 No matter. That’s the highlight of my haul from Goldcoast. Does it make me bitter, or make me wish I could have found some better back issues during the time that place was still open? Of course not. I loved those journeys. I loved those walks. I loved how we’d be walking up and down Lawson Boulevard and inevitably somebody we knew, or somebody our parent’s knew would whiz by in their car and honk. That’s your mode of transportation, not mine. 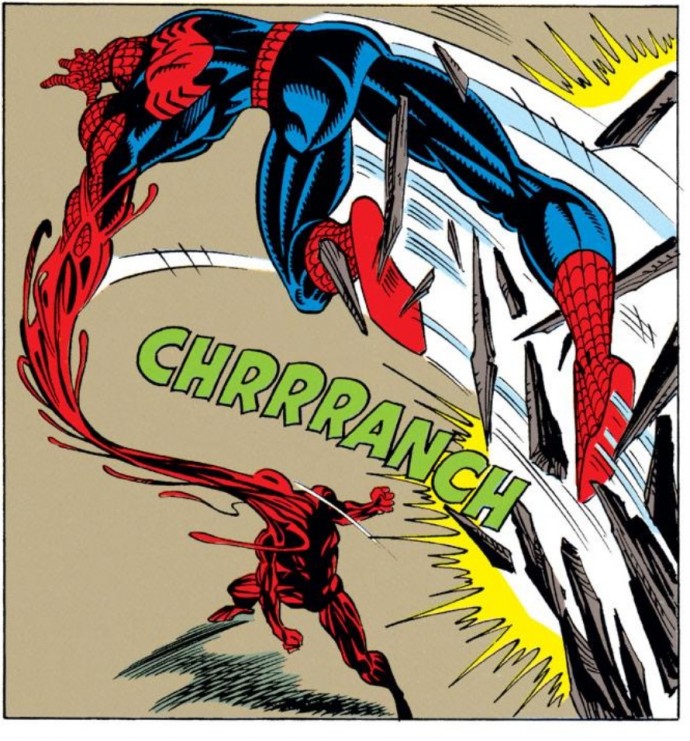 The Goldcoast years made me smile. And as a kid who wasn’t exactly Mr. Popularity back in the day, thinking about those walks makes me smile. My friend was and is one of the most good-natured people you’ll ever meet. And he and his family are going through a world of unimaginable hurt right now. While I’m sure the last thing he wants to think about right now is the smelly old flea market where I bought a couple of comics, and he bought a couple of t-shirts, I do hope from time-to-time he remembers the journeys of how we got there. Just a couple of teenagers, bored, with nothing better to do than walk.