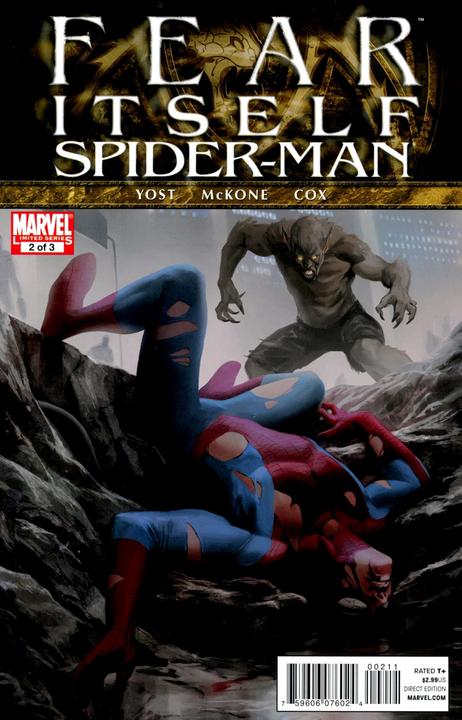 There’s a moment in Fear Itself: Spider-Man #2 where I’m overtaken with a bit of jingoistic pride and suddenly, whether it’s intentional or not, this whole off-shoot miniseries started to make sense to me. After dispatching of rat-like villain, Vermin, Spider-Man heads back into the teeth of the storm: New York City is overrun with fear. Spider-Man himself is feeling overwhelmed, skittish even, at the chaotic scene. He then runs into his long-time nemesis J. Jonah Jameson, who is currently the (fictionalized) mayor of New York.

When Spidey asks Jonah if he’s scared, Jonah talks about the inspiration he gets from his astronaut son. The risks his son takes make the current chaos in New York seem small in comparison. He then implores Spider-Man to get back out there and do his job.

These two characters rarely treat each other like real human beings when they’re in each other’s company, so this little moment of solemnity was appreciated. It also sent the “I Heart NY” part of my brain into emotional overdrive. Despite the years of torment and antagonistic behavior towards each other, Spider-Man and JJJ understand there’s something bigger going on in New York City. JJJ does what he can by being the cool and calm figurehead, but Spidey has to get back out there and do what he always does – save the day. Save New York, really. 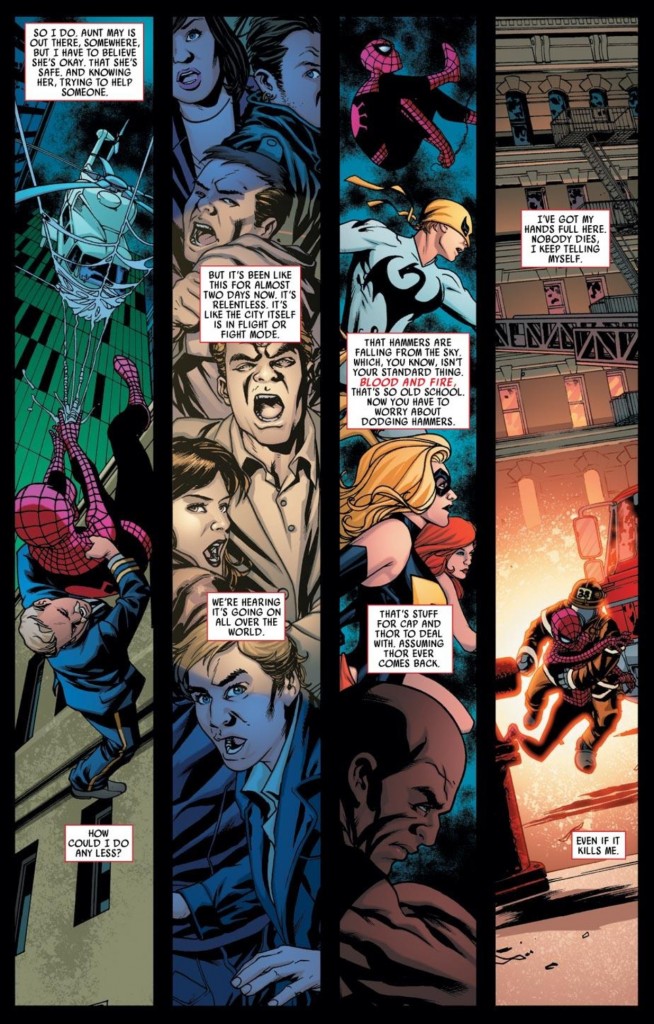 And that’s when it all clicked here. I spent the first issue of this miniseries and the bulk of the second trying to figure out which precise fear the creative team was going to exploit in order to connect Spider-Man to Marvel’s larger Fear Itself storyline. But what we have instead is something a little more self-contained and a little more nuanced. While Spider-Man continues to repeat his “no one dies” mantra that he introduced in ASM after the death of Marla Jameson, it’s not the general idea of innocents dying that he’s contending with but rather the disintegration of his home-base, New York. Otherwise, why would he seek refuge from someone who’s only ever operated as a thorn in his side? His visit with Jameson reinforces the idea that when New York City needs a dedicated hero, past differences are put aside. JJJ will surely go back to tormenting Spidey once this panic has been resolved, but for now, NYC needs its hero. 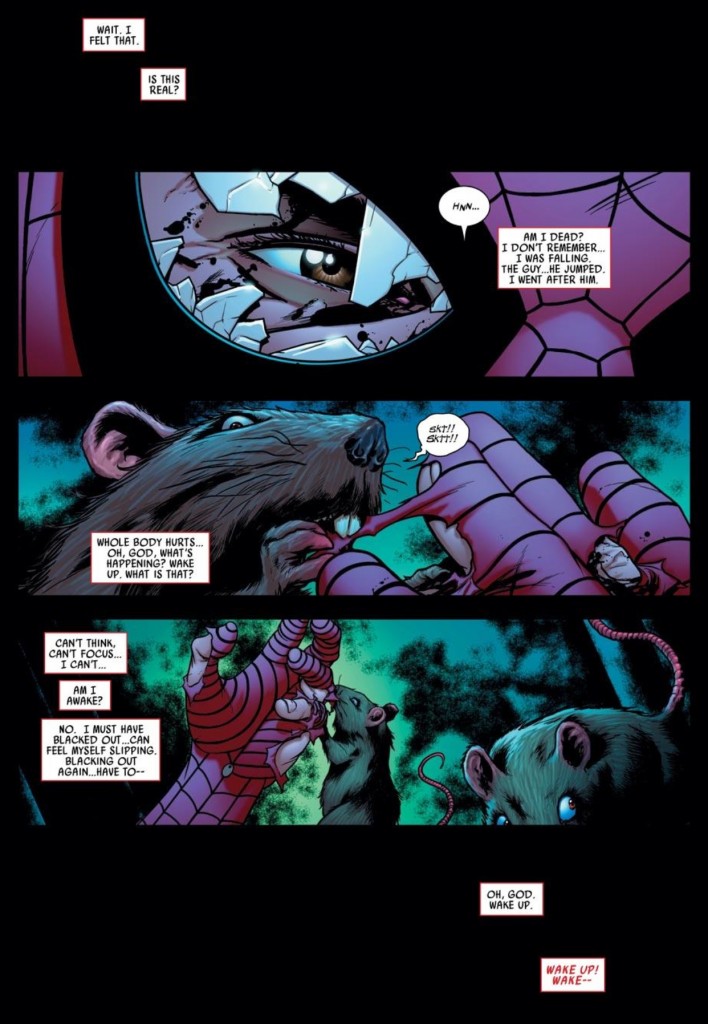 Sadly, I feel like New York City isn’t the “character” in the Spider-Man universe it once was. The city has almost morphed into a more generic Metropolis or Gotham City clone. I’m guessing it’s the risk you run when you base a fictional universe inside a real place. The real NYC which was first featured in Amazing Spider-Man in the 1960s was a place that needed a few superheroes in the real world. The idea that Spider-Man could swing over an alley somewhere on the Upper East Side and see someone getting mugged or threatened on cue, was very real. This trend continued through the bulk of the ASM run in the 70s, 80s and even the 90s to some extent. And while the city is now far from being the safest place on planet Earth, a lot of the grittiness is gone. Keep in mind that under Mayor Giuliani, there were “adult” shops in Times Square that were replaced with a Disney Store and similar “family friendly” outposts. This is not a complaint, but I would imagine it’s hard for a comic book creative team to take a snapshot of the current NYC and to transplant it into a superhero story. 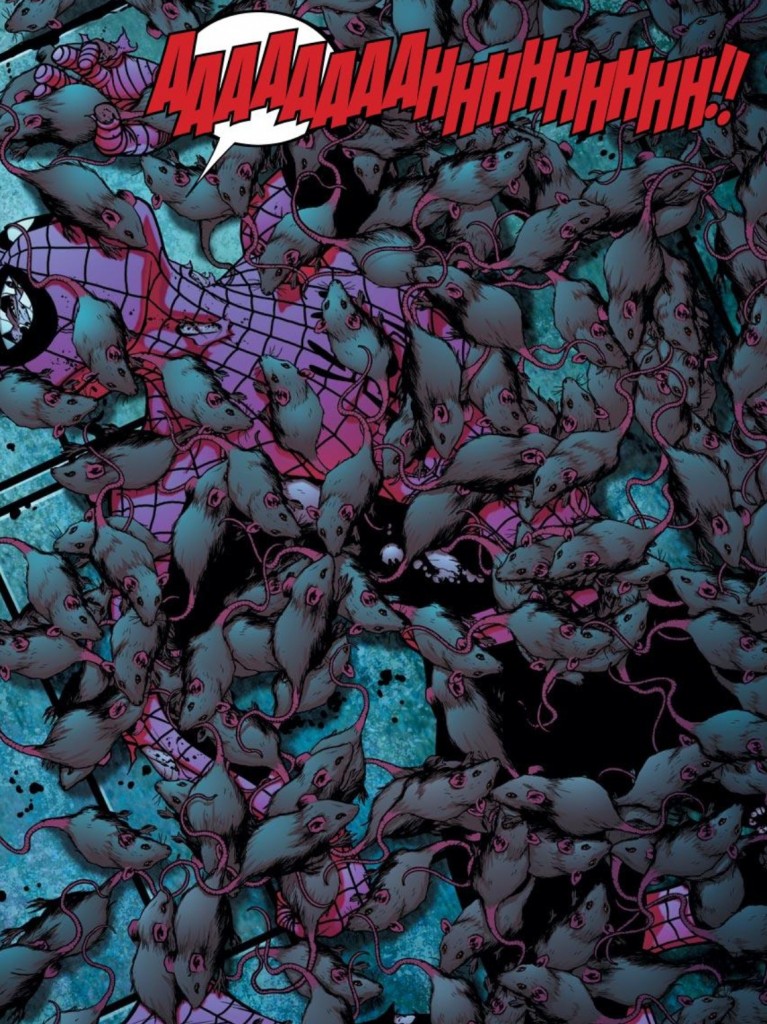 This Fear Itself miniseries capitalizes on the general premise of the main Fear Itself Storyline – that the God of Fear is using people’s worst fears against them – to create a throwback New York City, complete with crime, lawless gangs and general chaos. While Peter Parker has donned the Spider-Man costume to protect innocent people everywhere, at the core, he’s a kid from Queens who went to high school and college in the NYC, takes photographs for the main NYC tabloid and has family and friends in and around NYC. If we paced the Spider-Man universe in real-time, he’s watched this city grow and become a safer place to live with a higher quality of life. Watching that all move backwards in the span of a few days due to some supernatural occurrence has to be downright terrifying for Spider-Man.

Based on the last few pages of the issue, I’m going to guess that the comic is going to move back into a more traditional “heroes versus villains” plot for the series finale (issue #3). But for the time-being, I’ve got myself convinced that these issues are also about Spidey’s love for his city. Makes me want to sing a Sinatra tune.