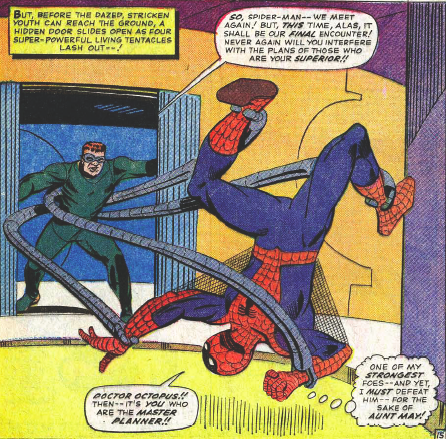 As I’ve said before, a classic superhero needs a classic supervillain to play off of – a ying to their yang, and a nemesis that usually finds a way to make things personal. The Fantastic Four has Doctor Doom. Captain America has the Red Skull. Over in DC land, people associate Superman and Lex Luthor and Batman and the Joker.

What strikes me about the Stan Lee/Steve Ditko issues of Amazing Spider-Man (ASM 1-38) is the prototypical “arch” nemesis is not as clearly defined. Lee and Ditko did a fantastic job creating fantastic, larger than life supervillains, who have all played a role in making Spider-Man’s life miserable. If your criteria for determining Spidey’s true arch-villain is who’s created the most havoc for Spider-Man’s personal life, than the Green Goblin/Norman Osborn has to win hand’s down, for the death of Gwen Stacy, Osborn’s abusing parenting which led to his son (and Peter’s friend) Harry becoming the next Goblin, and countless other dastardly deeds committed.

But what about Doctor Octopus? While I mentioned a few weeks ago that the Goblin got the benefit of having a secret identity which increased his stock substantially, during the Lee/Ditko-era, a stronger argument could be made that Doc Ock was Spidey’s true arch-nemesis.Recently, over at the great Silver Age comics blog, author Pat Curley argues that the man with the super-strong mechanical arms and the brilliantly deranged mind is without question, Spider-Man’s first true arch-villain:

Anybody who read only the Steve Ditko issues of Amazing Spiderman would know exactly who was Spidey’s arch-enemy, and it wasn’t the Green Goblin. It was Dr Octopus, who was the first villain to appear in a two-part story (ASM #11-12,) the first to appear in a three-parter (#31-33), and who also headlined the first Spiderman Annual.

To go into more detail, Doctor Octopus seemed to be attached to the most special and unique moments in the early ASM run as Peter/Spidey became more fleshed out as a character. In ASM #11 Peter had a budding romance with Betty Brant, a secretary at the Daily Bugle – so much so that he’s ready to reveal his secret – but the relationship is squashed when Betty’s brother is killed during a battle between Doc Ock and Spider-Man, and she blamed Spider-Man. It’s a truly tormenting moment for Peter, as it’s the first real instance since his Uncle’s death where he realizes he may not be able to live the life of a normal teenager due to his double-life as a masked hero. In the very next issue, Doc is the first villain to unmask Spidey, though because Spidey has been rendered so weak and useless by the sniffles, the villain and the surrounding entourage all believe Peter was pretending to be Spider-Man due to some misguided bravery. So his secret was still safe.

And then of course there’s the epic three-issue run (#31-33) Curley refers to, best known as the “If This Be My Destiny?” storyline, which is arguably one of Marvel’s greatest arcs of all-time. Doc Ock actually doesn’t make a physical appearance in this run until ASM #32 when it’s revealed that he’s the mysterious “Master Planner.” However, in true arch-nemesis fashion, Doc makes his battle with Spider-Man (unknowingly) personal when he steals a serum that Peter/Spidey is seeking because it’s the only thing that will save his dying Aunt May. When Peter catches wind that Doc has stolen the serum, he promises vengeance, and ends up getting himself pinned under tons of equipment during the battle with his villain. It takes every ounce of strength and emotional perseverance for Spider-Man to succeed and take back the serum. And it cannot not be ignored that Lee and Ditko gave Doc Ock the honor of playing the role of primary antagonist in this critical storyline.

Now keep in mind, while Doctor Octopus is causing all this trouble for Spider-Man, Green Goblin is no slouch either. The Goblin received a well-hyped introduction by Lee and Ditko and the mystery of who was under the goblin mask was played with precision by the creative team for well over two-years. That has to count for something. Meanwhile, Doc may have been the first villain to be featured in two and then three consecutive issues, but the Goblin makes 5 appearances over the span of 13 issues demonstrating how highly Marvel valued his potential.

Is it possible to have two arch-villains? Spider-Man has gone on to arguably become Marvel’s most popular superhero, so if anyone deserves such a unique honor of adversaries, it’s him. Doc Ock certainly was featured in the most historic issues of the Lee and Ditko run, but the duo also clearly had very big plans for Goblin that I’m sure Ditko would have been involved with if he didn’t leave ASM after issue #38 (just before the Goblin’s identity is revealed). For now, let’s compromise and call Doc and Goblin arch-villains #1a and #1b.

Leave a Reply to as140 Cancel reply