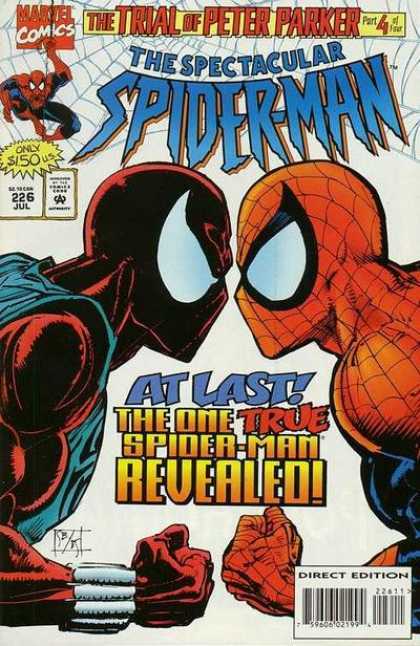 In a recent Q+A with fans, Marvel executive vice president Tom Brevoort addressed the issue of what was worse for the comic book industry: angry fans or apathetic fans.

Brevoort’s response got me thinking about my own breaking point as a customer. A question that I get asked by in-the-know comic book fans is how do I react when Marvel does something with Amazing Spider-Man that pisses me off? Could my loyalty to the title and character ever be betrayed to the point where I would stop collecting?

In some respects, I already had that kind of run-in with Marvel and Spider-Man. When Marvel was unleashing the infamous “Clone Saga” on readers, the story arc was so exhaustive, that my teenage self didn’t have the time or resources to keep going back to the local comic book shop to find out what happened next. And then when Marvel made the big reveal that the clone was actual the REAL Peter Parker and that the Spider-Man I had been reading about this whole time was actually a clone, my collection took a hiatus. Because quite honestly, the whole thing was just convoluted and excessive. And I was just a teenager who wanted to buy and read Spider-Man comics, not get into some debate about the REAL Spider-Man.

But I came back. And fast forward about 10 years and Marvel did something controversial with Spider-Man again. They “undid” his long-standing marriage with Mary Jane and erased from the world’s collective memories that Peter had publicly revealed his secret identity all in an effort to save his aging Aunt May who has been on death’s doorstep since the series started in the 1960s. The “One More Day” storyline is universally reviled, and the “Brand New Day” storyine that followed was a glorified reboot, something publishers typically do in an effort to boost sales when interest is sagging.

But this time, I stuck it out. Maybe it’s because I’m a subscriber for ASM and thereby the effort of having to go to the comic book shop and drop down full face value for a new comic is no longer an issue for me. But I actually liked some of the issues that followed One More Day. As a long-time fan, I would have been bummed to miss out on some of the classic villain revivals like Electro and Mysterio (among others). I would have been kicking myself if I didn’t pick-up Alex Ross’ awesome ASM #600 cover.

But maybe the problem is at this point in my quest, I’ve come too far to get emotional about the current product. I’m so close to completing something I daydreamed about as a kid – why would I undermine my quest by not buying the new issues because some writers and editors decided to take the character in a different direction from what I remember as a teenager?

So what would make me snap as a reader? On first blush I would say if they killed off Peter Parker in some kind of permanent way. Part of my fascination with Spider-Man has always been tied with my ability to relate to the dorky, but heroic Peter. If Marvel were to kill off Peter in ASM and try to replace him with someone else under the mask, more than 40 years of storylines and lessons learned would feel cheapened and negated in my eyes.

I’d also add reviving Peter’s first girlfriend, Gwen Stacy, who was killed in ASM #121 by the Green Goblin in one of the most famous comic books of all-time, to the list of no-no’s. Sure, they’ve cloned Gwen, given her spawn and have done everything they could to constantly remind Peter of her death and prior existence, but her actual death seems to be one of the few permanent ones in the comic book universe. If Marvel decided one day to bring Gwen back and paint it as if she was never pushed off that bridge, her neck never snapped, and she was never actually killed, it would essentially undo a cultural landmark. It’s the comic book equivalent of saying the moon landing never happened. ASM #121 is considered by nearly everyone to be the end of the Silver Age of comics, opening up a grittier Bronze Age where there were greater consequences for heroes and villains alike.

So I guess you can consider this my warning shot. There’s “angry” as in, “I’m so angry I need to keep reading so I get even more riled up,” and then there’s “angry” like “I’m so angry, I’m disgusted. I’ll never read this again.” Despite some questionable decisions, Marvel hasn’t pushed me to that point yet. Hopefully, for the sake of the joy my collection brings me, they never do.