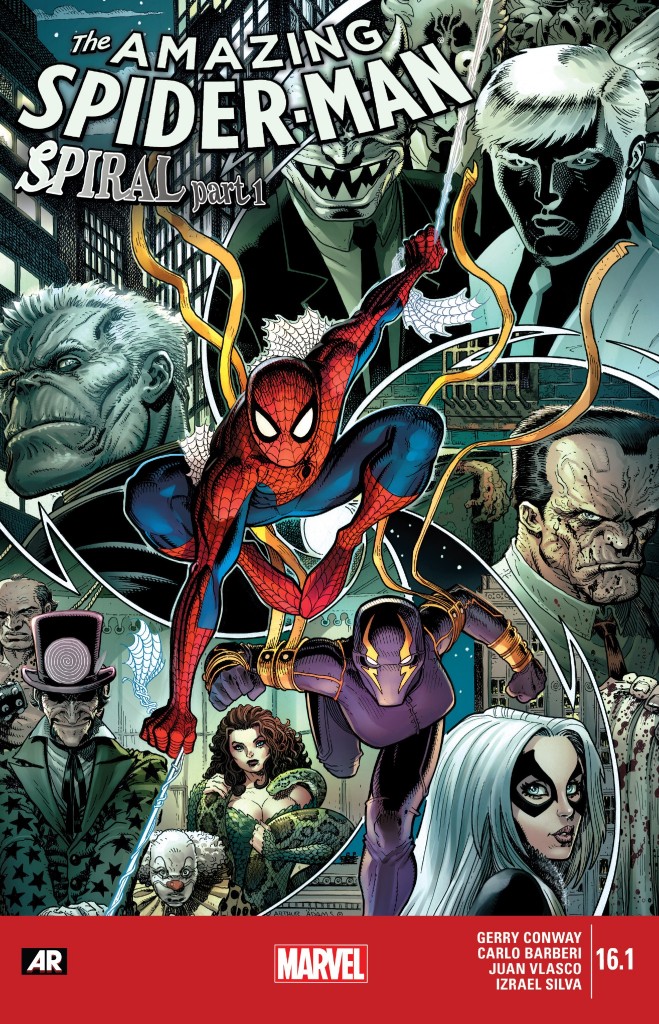 Gerry Conway, a man so humble he often dismisses being called a “living legend” and instead embraces being the “most hated man in comics” after he shockingly disposed of Gwen Stacy in the early 1970s, made what I will confidently call his “triumphant return” to Spider-Man with the first installment of his “Spiral” miniseries within a series (also known as Amazing Spider-Man #16.1).

It’s a bonafide, no fuss/no muss back to basics street level story reminiscent of something one would have read in a Spider-Man comic when Conway was barely 20 years old, making history by ending the age of innocence in the industry, and creating unhinged vigilantes like the Punisher. For the past six months, I’ve made no secret about the fact that after a seemingly endless parade of histrionic storylines that featured a citywide pandemic, the world ending via global warming, Peter being murdered by having his body switched with his dying arch-nemesis, and Spider-Man meeting 900 (or so) analogues in himself, I was desperate for something as simple and easily digestible as what “Spiral” presumably presented. 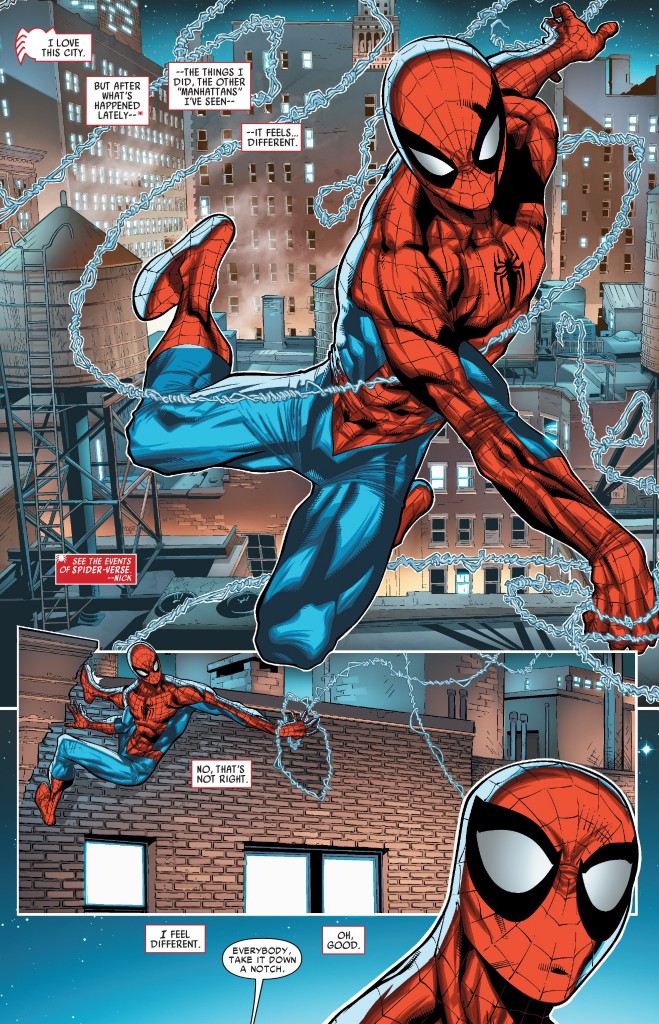 But even after welcoming this series with open arms, I still read this first issue (which features art from Carlo Barbieri) with a discerning eye. Conway is considered one of the greats for a reason, but like a professional athlete making a return to the field/court a number of years after he initially retired, there’s always a sense of skepticism and doubt. As a fan, you never want to see one of your favorites embarrass himself, and despite the fact that the “gang war” concept is one Conway has conquered many times over during his time as a Spidey scribe, there was also a risk of his more grounded style coming across as being out of touch or dated, especially when compared to the theatrics of current ASM writer Dan Slott.

I’m not about to get into a Slott vs. Conway debate here, because, by all accounts, Slott welcomed Conway back onto the book for “Spiral” with open arms, while Conway has been nothing but gracious towards Slott for the opportunity. Plus, even with my recent dissatisfaction with Slott’s story, he’s also proven many times over that his over-the-top style can lead to some epically great storytelling. There’s plenty of the room in the sandbox for both, especially if the net result are Spider-Man comics that I thoroughly enjoy reading. 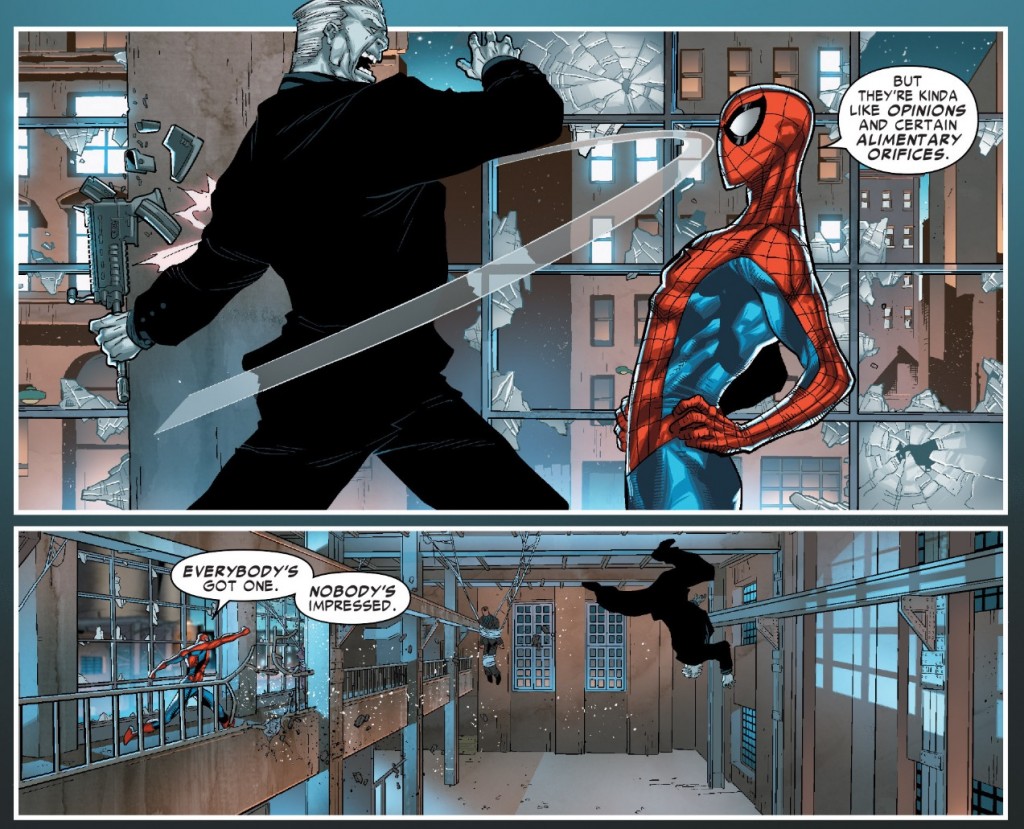 With all that said, there was something quite refreshing in the familiarity of having Conway’s voice – and more importantly, his voice for Peter – front and center in a Spider-Man book. Through “Spiral’s” first issue, that’s definitely my biggest takeaway. When compared to other writers who have either filled in for Slott during his ASM run (Christos Gage), or who wrote “B” titles or ancillary series alongside Slott (Chris Yost and Mike Costa … I’m not even going to count Matt Kindt’s Marvel Knights Spider-Man since that book’s tone was so far off the reservation I don’t even know if it can honestly be called a Spidey title), Conway approaches his story with  such a higher level of confidence, he’s able to go in an entirely new/different direction with Peter’s voice while still making it read contemporary and current.

In other words, I think Conway has actually gotten better as a writer during his time away from Peter/Spider-Man. There is just something in the way ASM #16.1 doles out varying levels of inner monologue from Peter, dialogue, and then narration – and then mixes in the perspective of Yuri Watanabe/Wraith lending the book with a vintage Marvel Team-Up feel – that demonstrates a top-notch comic book writing. There’s a bite and an edge in Peter/Spider-Man’s patter with both allies and adversaries. He’s funny without being goofy. He’s cerebral in sarcasm. He’s hardly impetuous, but he admits that his freestyling ways have a habit of making trouble for himself and anyone around him. 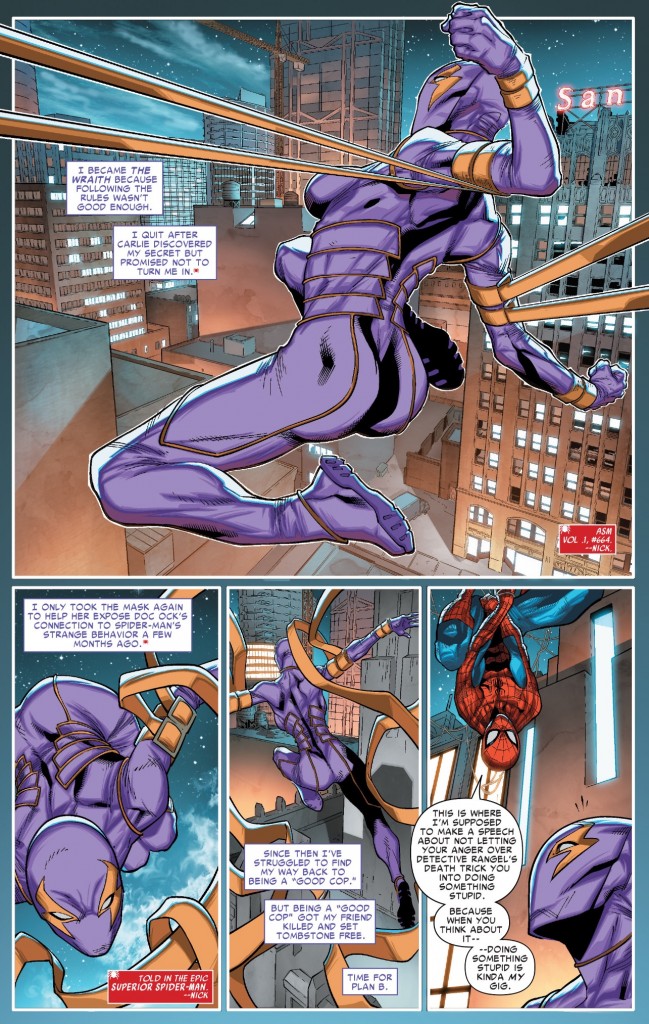 But more importantly, “Spiral” appears to be one of my favorite kinds of Spider-Man stories – one in which Peter/Spider-Man’s sometimes naïve worldview is challenged from multiple angles. ASM #16.1 does an amazing job drawing parallels between Peter and Yuri, before drawing a line firmly in the sand as to where these characters are starkly different. As a police officer, Watanabe attempts to be “by the book” and procedural, until she accepts the fact that she can accomplish far more operating as a vigilante like the Wraith. Meanwhile, as Spider-Man, Peter admits to operating outside the confines of the law, but also adheres to an arbitrarily established moral code of “with great power there must also come great responsibility.”

The truly great Spider-Man stories are the ones that push back hard against the boundaries of power and responsibility. Yes, at the core of that mantra is be responsible with the power you yield, but who defines responsibility, and does responsibility limit power? Using the power of proper procedure, Watanabe ends up with a dead partner, a busted case and a hardened criminal on the loose, apparently dealing drugs to judges. As the Wraith, Watanabe cuts a deal with Mister Negative that provides her with the evidence she needs to independently shut down Tombstone. Spidey realizes that his ally just made a deal with the devil in working with Negative, but all the same Watanabe does potentially achieve justice (and vengeance) for her fallen comrade. So did the ends justify the means? We won’t know until we read further. 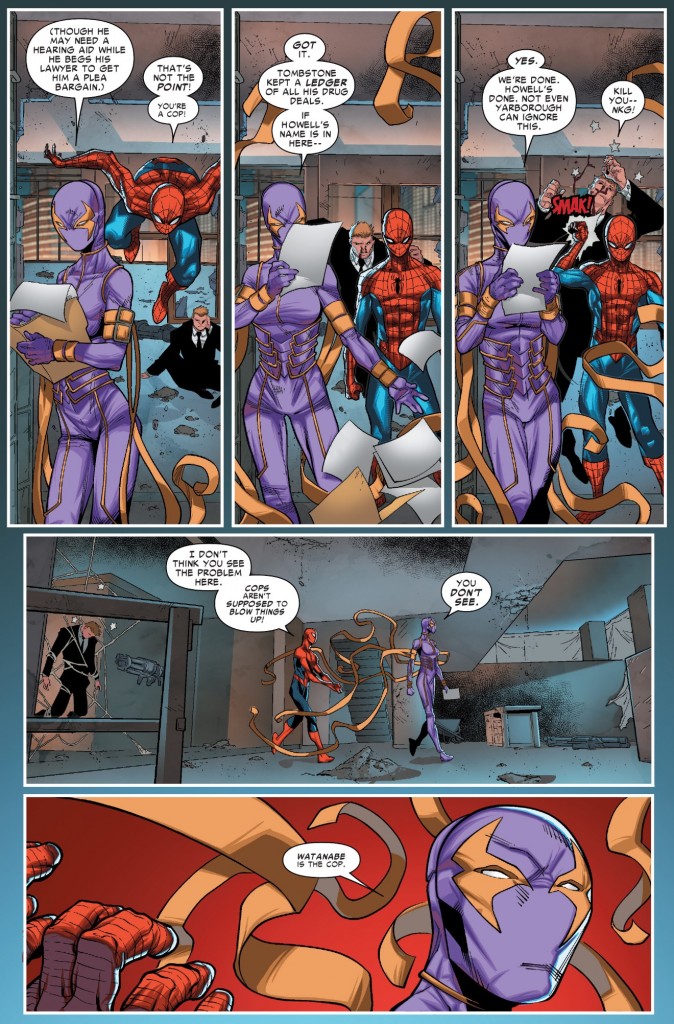 It’s patently obvious that “Spiral” is going to be a story filled with misdirection, false reveals and red herrings. There are true crime elements that are heightened via the power of fantastical superheroics. Upon first reading it, I wondered if Barberi’s art style was too contemporary and stylized for such a gritty, street level story as this, but it definitely grew on me after some subsequent readings. Either way there was a fair amount of thought that went into the layout and visual flow of this story. Bring on part two.