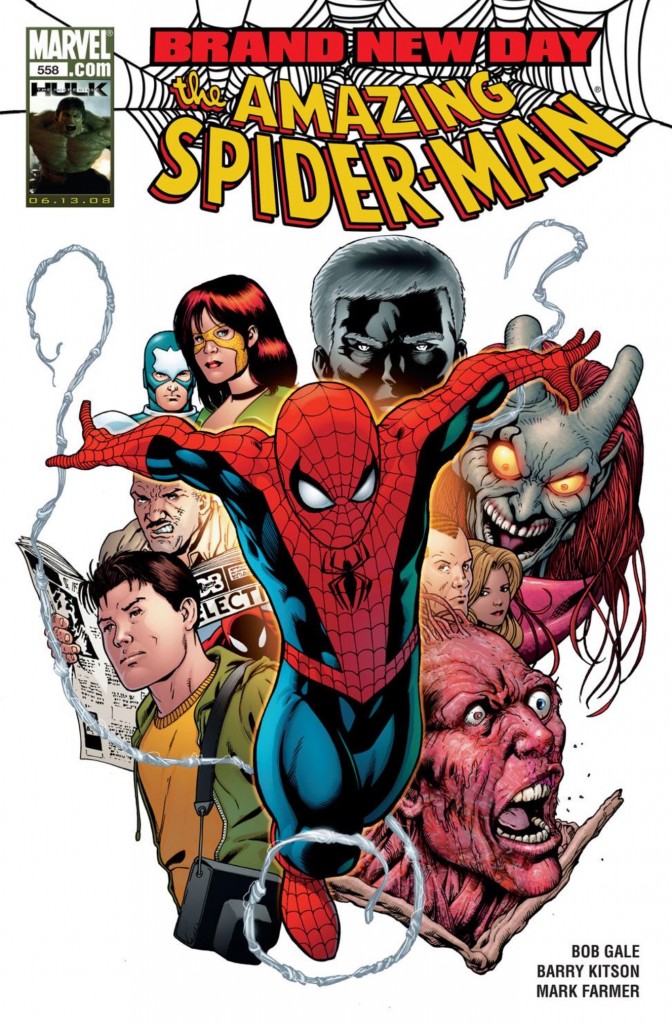 I’m still getting a fair bit of pushback from some of you after praising the first few arcs of the controversial “Brand New Day” era of Amazing Spider-Man. So much so that I’m starting to think this retrospective series I’m doing has evolved more into “the case for ‘Brand New Day,’” rather than just a friendly, neighborhood stroll down memory lane.

No bother. I can play defensive. What good is it to have an opinion if you don’t have to defend it every once in a while, even to a readership as wonderful and agreeable as all of you are (that’s right, Ginocchio, butter everyone up).

Despite my first two paragraphs of set-up, I’m not here to heap massive amounts of praise on Amazing Spider-Man #558 – the first true “filler” and/or standalone issue of the “Brand New Day” era. The main crust of the story centers around the return of the villain Freak, a character that was introduced two arcs ago and who is probably my least favorite of all of “BND’s” assorted new characters. So, in terms of action and conflict, ASM #558, by Bob Gale and Barry Kitson, was fairly forgettable. 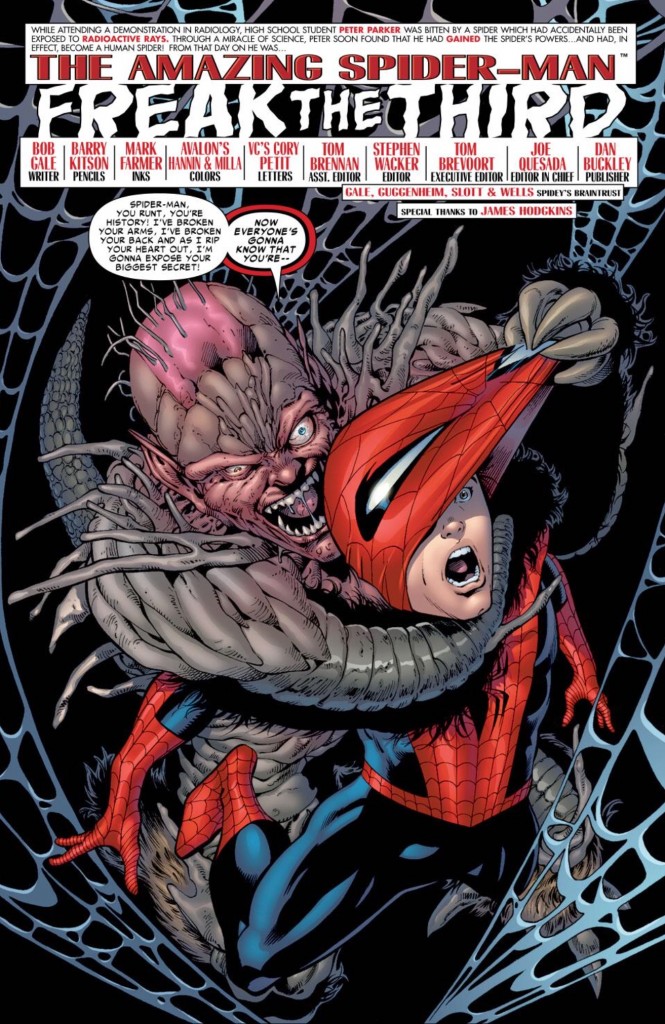 All the same, despite the meh-ness of its central villain, ASM #558 still does something considerably better than the current crop of books trickling out from the Spider-office (primarily ASM) – its dedication and execution of world building and logical plot development is without peer when compared to what we just witnessed with “Spider-Verse.”

I guess it’s no great prize to say something was better executed than a story that is notorious for being poorly executed (and filled with the kind of editorial errors/inconsistencies that we just didn’t see during Stephen Wacker’s reign on the book). Still, as much as this level of praise still makes a fair bit of you cringe whenever I say, I liken the “BND’s” braintrust’s ability to build its story logically, fleshing out all of its dangling subplots and supporting characters, to what readers got during the more revered Roger Stern/John Romita Jr. and Tom DeFalco/Ron Frenz creative runs on ASM. 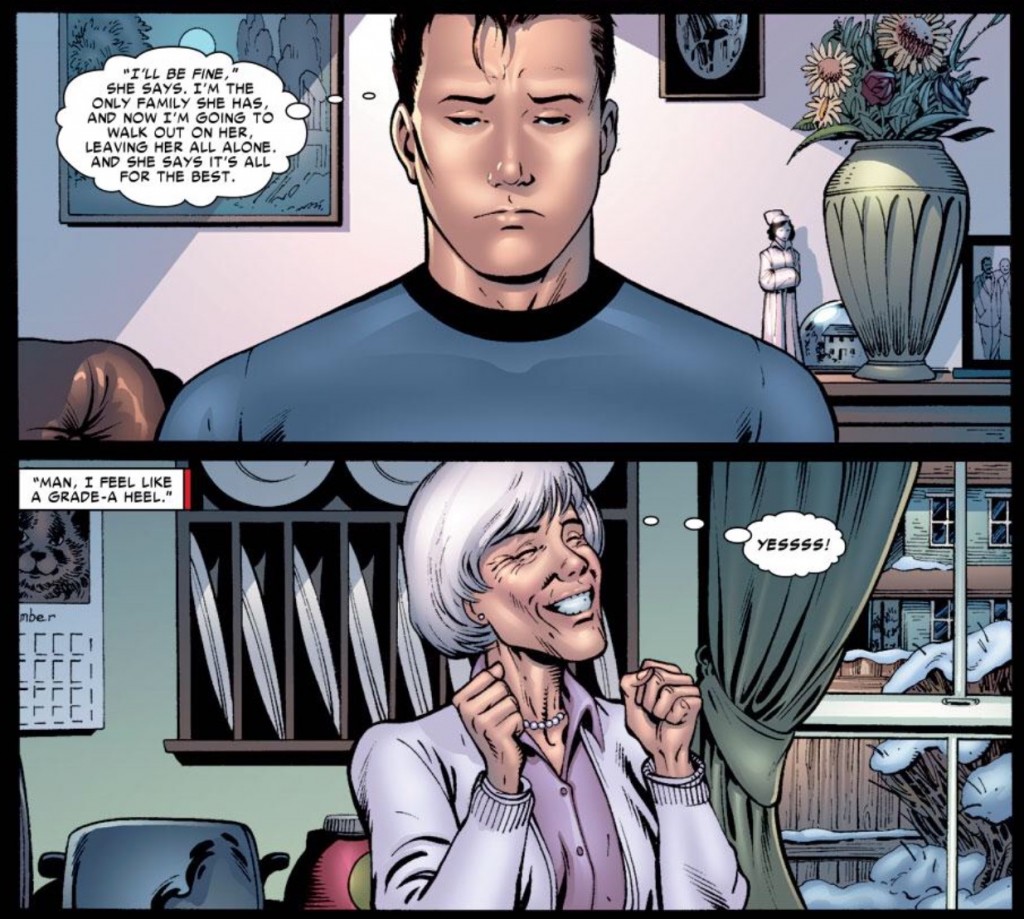 Over the course of just one issue, Gale and Kitson address the return of Freak; the role of Dr. Curt Connors in his creation; the threat of the new goblin, Menace; the New York City mayoral election; J. Jonah Jameson’s health and his rage over the fact that his controlling interest in the Daily Bugle was sold by his wife Marla; Peter and his relationship with Aunt May (which, to be fair, was a total regression back to the “wheatcake days” during “BND”); and the Spider-Tracer murders. We even get a smartly placed cameo from Martin Li, who’s alter ego is the villain, Mister Negative, to remind readers of his important role in this saga.

But more importantly than just addressing subplots is the fact that each sequence in this comic book serves a purpose. There is a definitive beginning, middle and end to everything they introduce. Spider-Man meets with Dr. Connors to discuss how to defeat Freak. Connors gives his advice (Spider-Man is squeamish about the idea that he has to sorta “kill” this guy to get him back in his chrysalis). Freak breaks out of his chrysalis and engages Spider-Man. Spidey and Connors team-up to defeat Freak by getting him to inhale the vapors of a chemical that nonviolently reverts him back into his chrysalis. 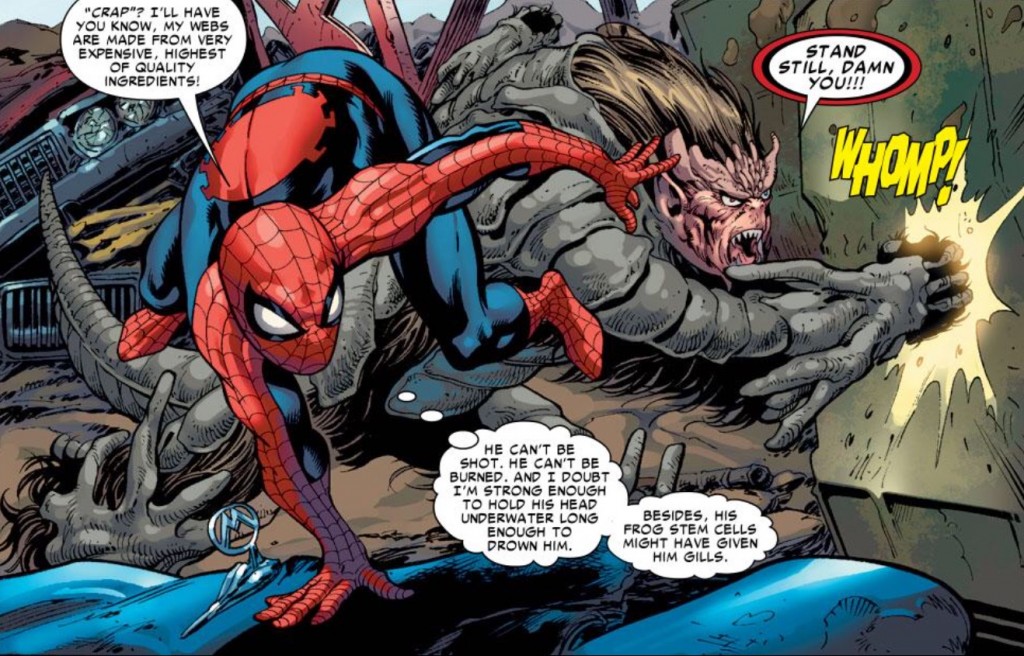 If that’s too basic for you, how about the set-up and execution of William Hollister’s press conference. Peter is there taking pictures for the DB (and needs to take unflattering shots, per his editor’s request), when Martin Li comes out and gives his endorsement. That begets Randall Crowne watching the presser from home and drawing attention to the fact that Li is a man who “can’t be bought” and warrants watching. Menace attacks Hollister, which pays forward the incident from the second “BND” arc when the new goblin kills one of the mayoral candidates on the campaign trail (which, in turn, brought Hollister into the race, and makes the ultimate reveal of – spoiler alert, blah, blah, blah – Menace as Lilly Hollister, Bill’s daughter, all the more interesting).

Whether you’re interested by this plot or not, these issues are all textbook examples of good storytelling. None of these check-ins feel wasted or obligatory. And moments from earlier in the series are being paid off in measured doses, rather than the herky-jerky pacing of the current regime. And while you can think to yourself that this level of competent execution should be the norm, I hesitate to say that’s always been the case when it comes to comic books, especially today’s comic books (overall) which are so event-driven that simmering subplots are seemingly dropped in favor of whatever flavor of the week idea the publisher is pushing at the moment.

Remember, at the end of the day, comics are a serial medium, and while its yeoman’s work for these creators to go out there every month (or three times a month as the case is here) and build a comprehensive story that builds on all of the things that came before it, it’s still endlessly frustrating when a creative team goes away from that methodology. I’ve talked about this in other venues, but the “writing for the trade” mentality in a lot of series, has killed the art of long-term storytelling – I’m talking real, long-term, world-building storytelling, not the kind of stuff that certain creators pass off as playing the long game these days.

“BND” undoubtedly had its flaws, but if a standlone issue like ASM #558, which could have easily been some throwaway issue marking time between Zeb Wells’s “Blizzard” arc and Dan Slott’s “Peter Parker Paparazzi” arc, still finds a way to advance the larger narrative of the arc the braintrust was building, then I can’t help but continue to look back at this era as one of the better ones in the book’s history.

So now, let me get back on defense.