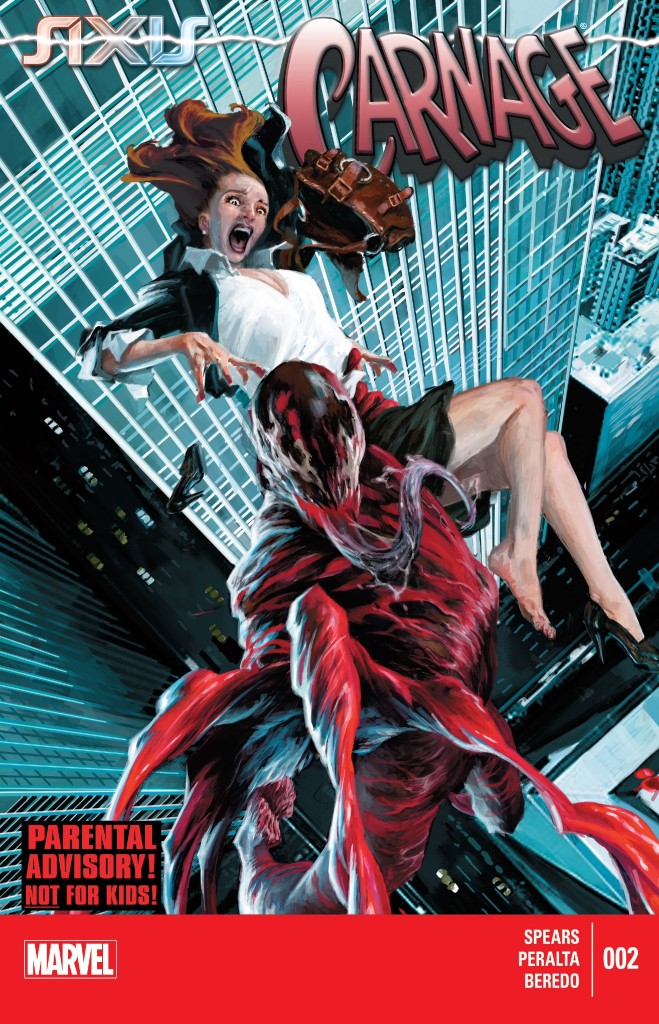 While I don’t think the Axis: Carnage miniseries features a premise that gives it a shelf life beyond the three issues it has been planned for (in contrast to the Axis: Hobgoblin mini, which I would love to read as an ongoing) Rick Spears and German Peralta have unquestionably hit upon something that is both creative and fun.

Part of the overall hook of the Axis event right now is how it is forcing all of these brutally out-of-character moments throughout the Marvel Universe. And while it’s been an unmitigated disaster within the pages of the Axis mini itself, broken out into these separate miniseries like Axis: Carnage has at least given this concept a chance to breathe and develop in a way where the reader develops some understanding and sympathy for the character in question. 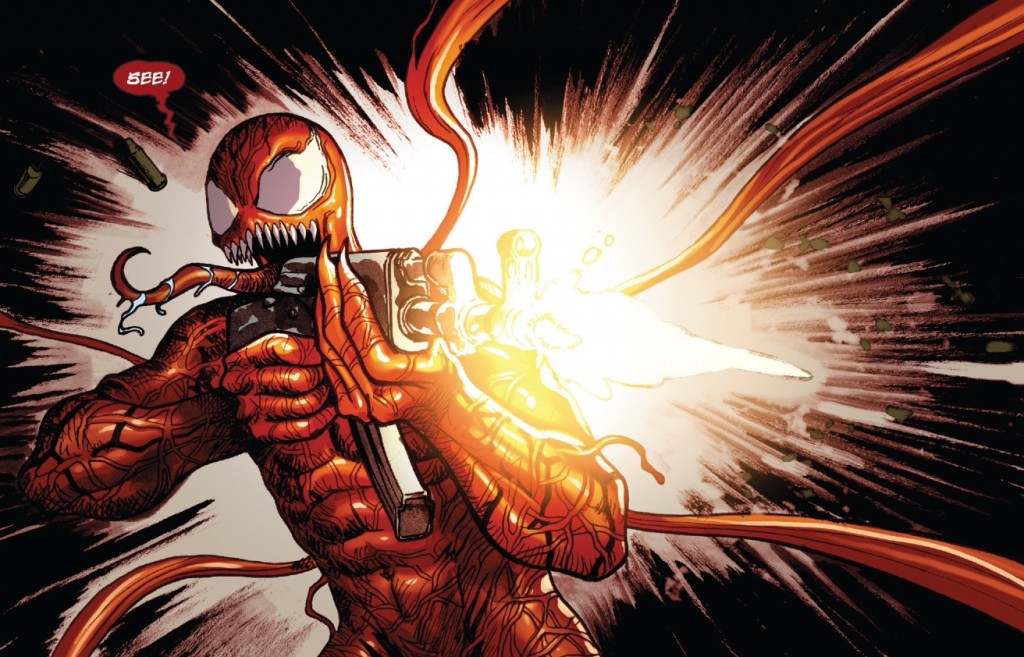 What has drawn me into Axis: Carnage is how it features an almost-freak show kind of appeal. Carnage is an undeniable sociopath who, as this issue itself notes, has murdered countless numbers of people. Publishing a series where this character is magically now trying to act like a hero is the epitome of absurd. Part of my initial interest in this series was driven by my curiosity to see how terrible of an idea “hero” Carnage was going to be. He’s not someone who has exhibited anti-hero tendencies like a Magneto or Loki, nor is Carnage the kind of sophisticated bad guy like Roderick Kingsley that could become a hero but do it in a fashion that was still somewhat true to the character.

But instead of being horrified by the final result, Axis: Carnage works precisely because Spears’s script embraces the absurdity of the idea. We get sequences like the very excellent Carnage “hero” origin, where Cletus Kasady reimagines the very first murder he has committed in a fashion where it’s a defining moment that inspires him to become a hero (complete with a young Cletus holding his murder victim a la Spider-Man and Gwen Stacy in Amazing Spider-Man #121). 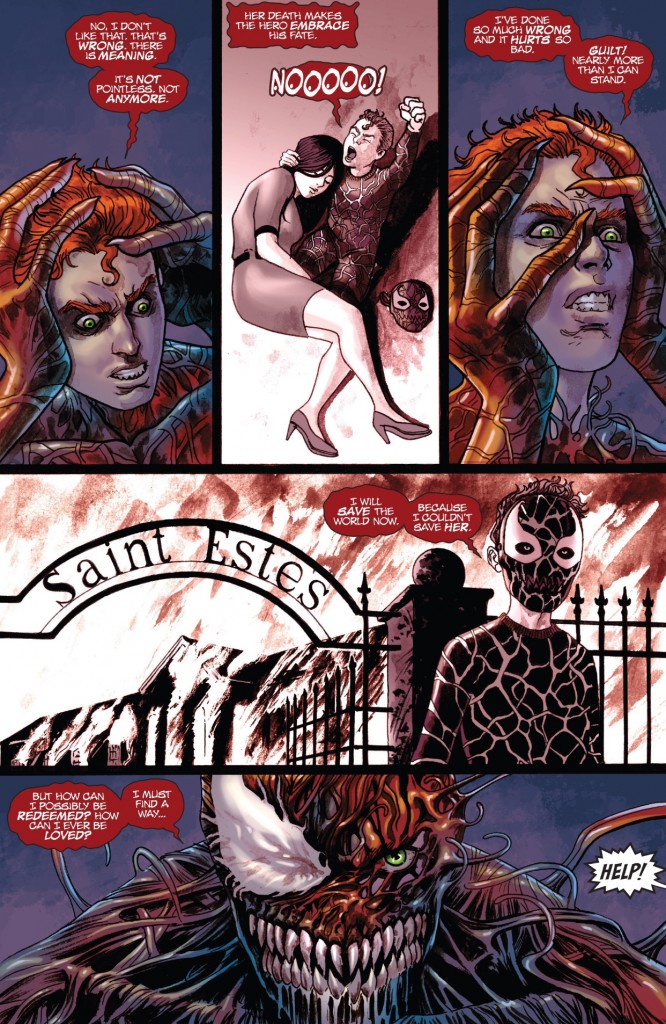 It’s the kind of tongue-in-cheekness that other writers have steered far away from when writing Carnage in the past. Watching Carnage carve his way through hundreds of innocent people has been done so much that it has essentially desensitized me to his evil, so bits like what we got in Axis: Carnage #2, or the very opening chapter of the Superior Carnage miniseries, which make light of the repetitive nature of Carnage’s insanity are like a breath of fresh air for the character.

Spears goes for a few yuks later in the book when Carnage attacks a gravedigger thinking he’s a grave robber and then proceeds to apologize to him, only for the man to moan that every bone in his body has been broken.

Actually, watching Carnage bungle his way through being a hero is pretty much the best part of this series thus far. Again, Spears and Peralta have basically acknowledged in this comic that Carnage the good guy is just a crazy idea. So if you’re going to create a comic based on an otherwise silly premise, you might as well just go for broke and go heavy on the humor and slapstick. 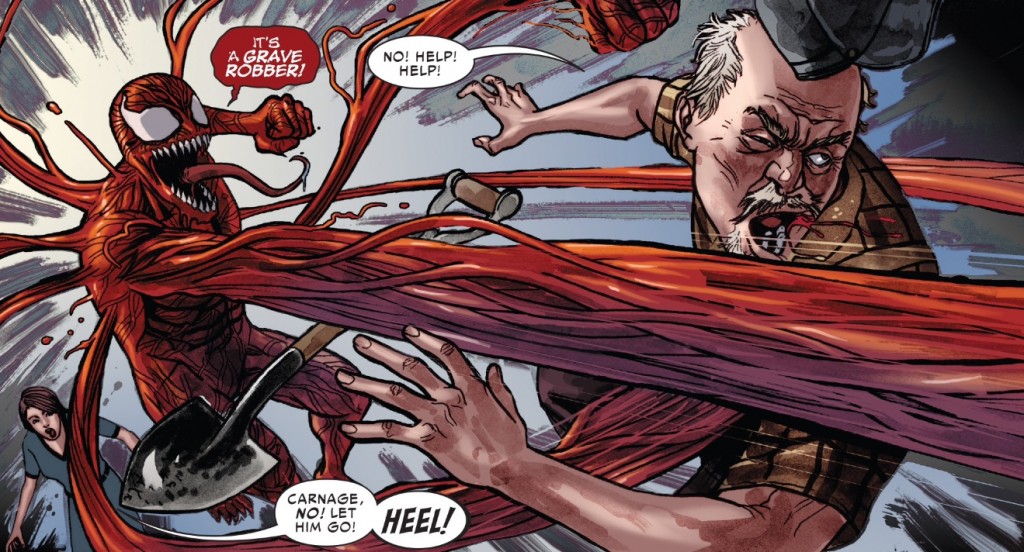 But I might be underselling the book’s depth of the book by just claiming its all jokes and no substance. In the upside-down world of Axis, there’s actually a purpose behind Carnage’s bungling and revised accounts of personal history. In terms of characterization, Carnage is using some of the harsher moments from his past and present to reflect and grow. When recounting his very first murder, he initially talks about how the moment contributed to his overall ambivalence towards life. But by understanding how his actions were wrong, he is actually showing remorse for his victims. In his later interaction with the gravedigger, he apologizes for the misunderstanding – which doesn’t exactly make up for breaking every bone in his body, it’s a start.

Additionally, the creators generate sympathy for Cletus in how they depict his relationship to news reporter Alice Gleason. Gleason is clearly trying to take advantage of Carnage’s misguided heroism as a means to advance her career, while Cletus’s mind is so warped from trying to turn over a new life, he fails to recognize how he’s being made out to be a chump. Carnage’s obliviousness only make seems like the very last panel of the comic, or an earlier scene where he’s demonstrating how a machine gun is a very bad weapon to use all the more hilarious because as a reader, I’m actually starting to like this guy as a person now, and not just some kind of one-dimensional killing machine that is impossible to relate to (who doesn’t want to cheer for the guy who’s being unwittingly abused by the girl?). 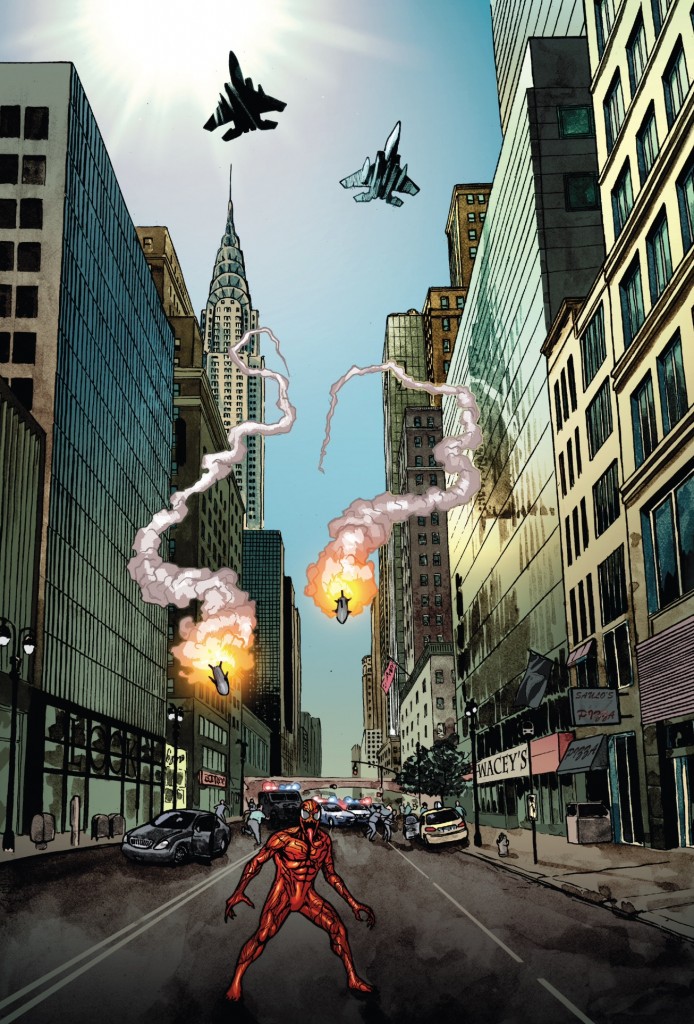 As I mentioned earlier, my only issue with this comic is that I really don’t see how the good times can continue beyond another installment. Axis: Carnage has been so much fun, but Carnage still works best in limited doses. And as much fun as this book has been, a part of me is interested to see what might happen next month after the Axis Inversion spell wears off and the comic’s supporting cast is left dealing with a serial killing maniac again. I’ll probably cheer Carnage as certain characters like Gleason get their comeuppance for abusing him, but at the same time be ready to move on from a status quo version of Kasady.