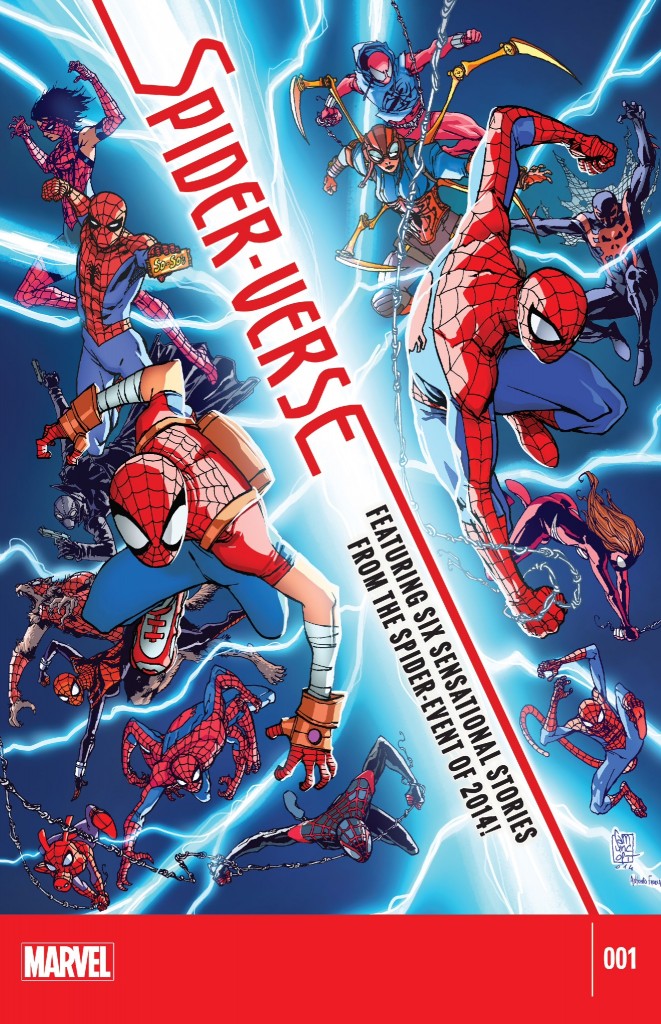 The first issue of Spider-Verse, a two-part tie-in to the current Spider-Man event “Spider-Verse” (you see, this is why I distinguish book names with italics and storyline names with “quotations”) is the pink bubble gum of comics books – a sweet burst of flavor and indulgence that is ultimately disposal once you’ve been chewing it for 10 minutes.

And two tie-in issues in, that seems to be the trend when it comes to how “Spider-Verse” is going to unfurl. As I mentioned in my write-up of Spider-Verse Team-Up #1, these comics are not bad by any stretch – some very worthwhile writers and artists (both new and old) have been recruited, so at the very least, the quality is undoubtedly there. 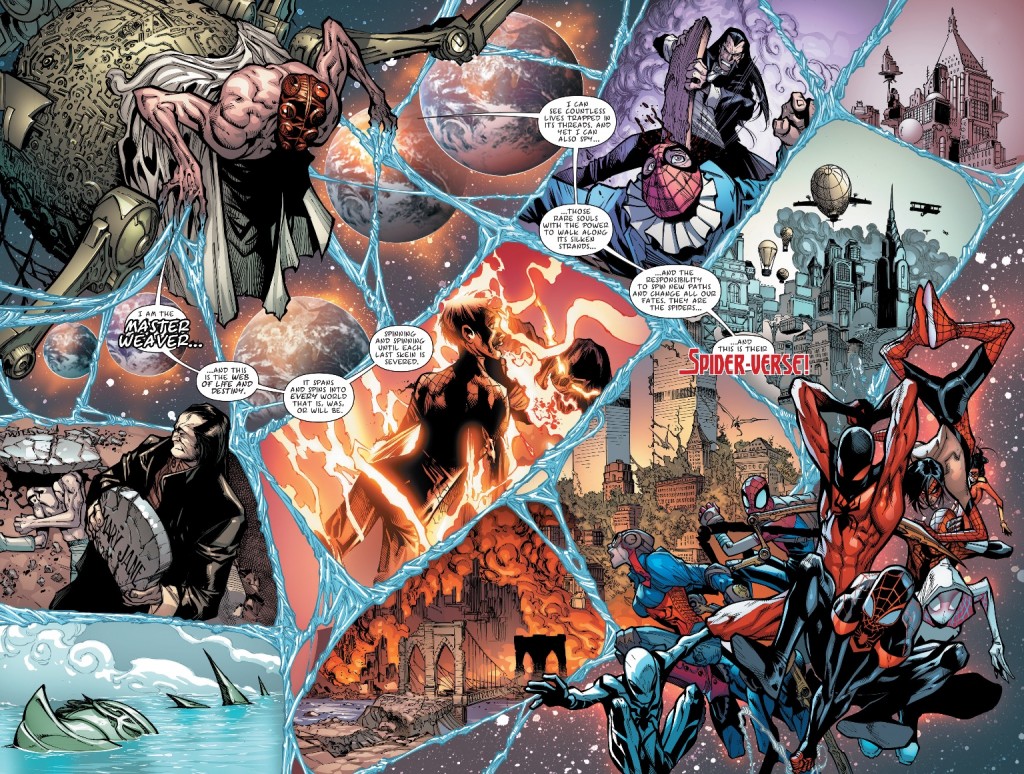 But these tie-in issues are also not leaving me with the impression that they’re all that consequential to “Spider-Verse’s” narrative. When you consider Spider-Verse #1 will cost you $4.99, that is a decent chunk of change for an anthology of stories that read like they belong as back-ups in an annual issue.

Probably my biggest complaint with the structure of Spider-Verse #1 is how superfluous the whole issue reads in light of what Marvel gave us over the course of five issues in the Edge of Spider-Verse miniseries. In Edge of Spider-Verse, we got five, fully-formed spotlights on different alternative versions of Spider-Man. While some were definitely better and more memorable than others, all five issues were quite successful in giving us a good sense of how the “every Spider-Man ever” premise was going to play out in Spider-Man: these characters would be introduced, star in their own adventures, and either be recruited by the other Spiders, or get killed by the Inheritors by issue’s end. A fairly easy-to-follow formula and one that was sufficiently established five times over. 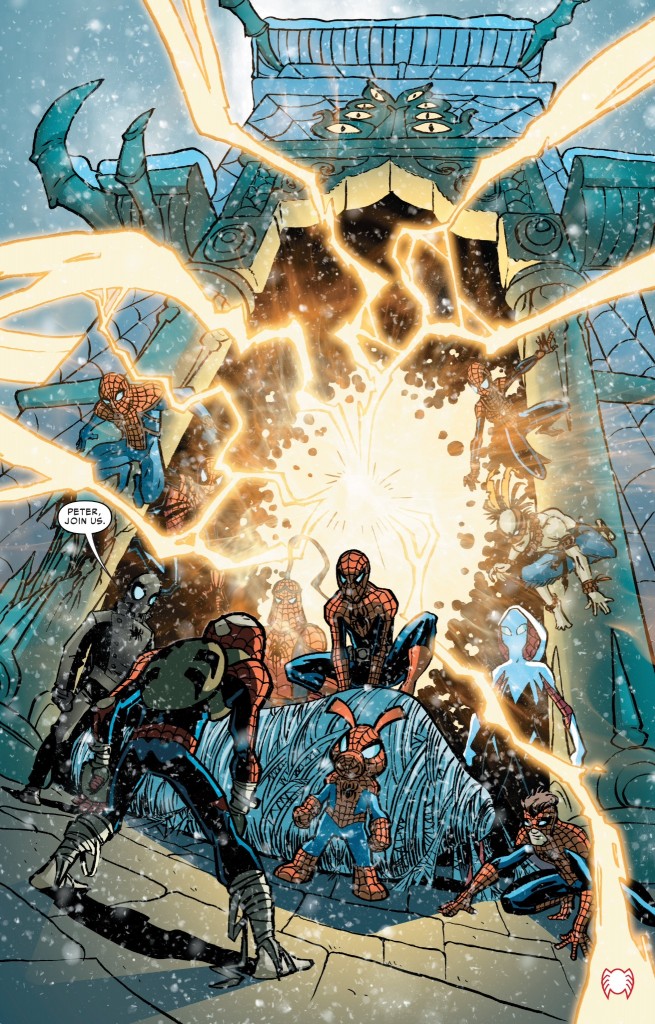 Spider-Verse #1 repeats many of the same beats as Edge of Spider-Verse, but in smaller, micro-stories that don’t service character or story to the same level. In this case, we got short stories about the Legend of the Spider-Clan Marvel Magnaverse Spidey, Steampunk Lady Spider, and Penelope Parker. At this rate, I’m losing track as to who’s a new Spider character and who is someone being created just for this event. But either way, I don’t see how it matters. I just want to remind Dan Slott and everyone else Marvel has pulling the strings of “Spider-Verse” that “we get it. It’s every Spider-Man ever. You have nothing left to prove so stop showing off.” 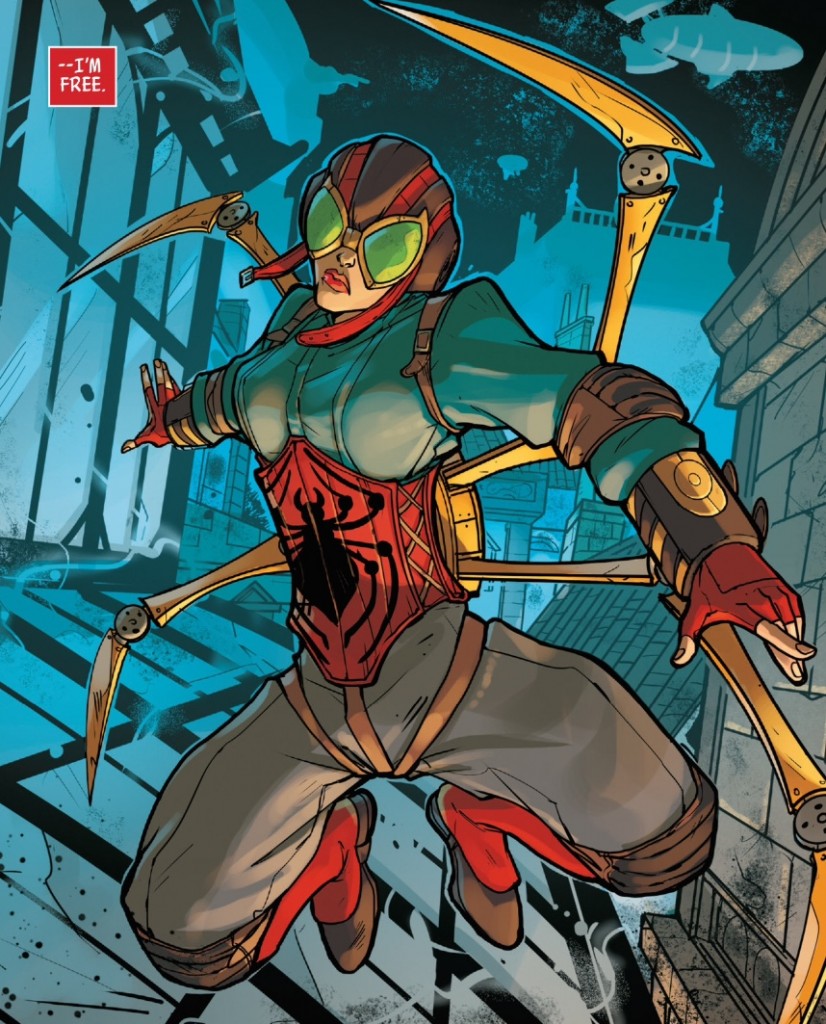 Seriously, after all of the alternative Spiders that have already been introduced in this story, is anyone out there really still counting to see if one of their favorites has been left on the cutting room floor (I know one of my Amazing Spider-Talk co-host Dan Gvozden’s favorite alternative Spiders was unceremoniously slaughtered by Morlun off-panel in this issue, so he’s not happy)? Especially when so many of these characters come across as being so disposable anyway. And when it comes to establishing new Spiders, Marvel and Slott need to be careful not to overstuff their event with too many characters who have no other role but to appear in “B” stories in tie-in comic books.

That’s not to say there aren’t some inspired bits in Spider-Verse. Without a doubt, the best part of this comic was the Hostess snack cake advertisement spoof where Slott and Ty Templeton craft a one page story in the style of old Twinkie ads that used to appear in Marvel Comics in the 70s and 80s, that evolved into another instance where Morlun murders a Spider (do we have an Earth designation for Hostess snack cake Spider-Man?). 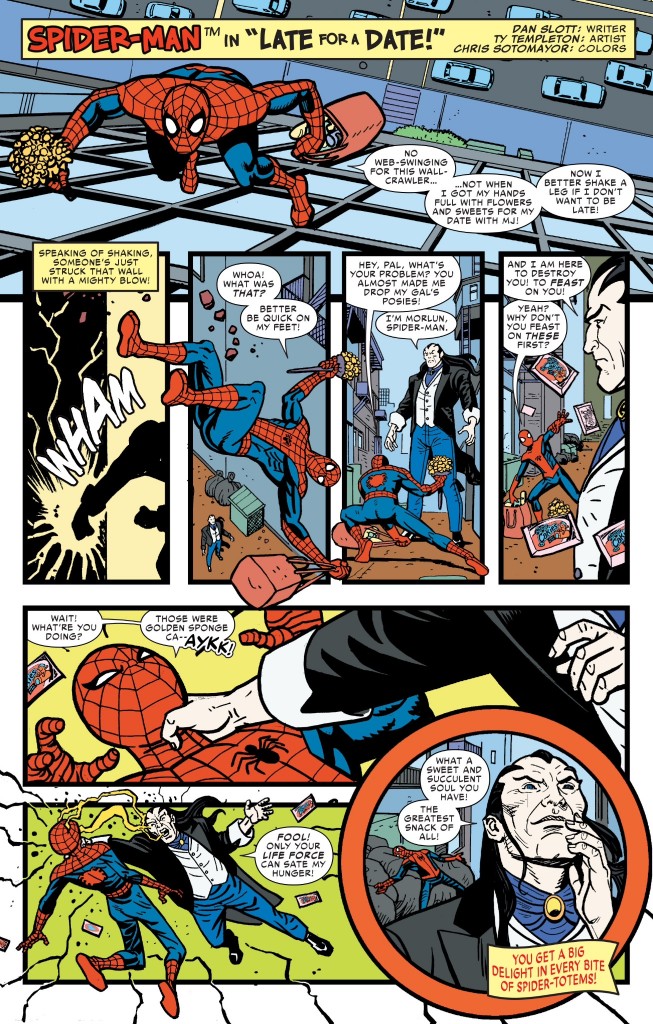 But I can hardly advise someone to shell out $5 for one very well executed joke.

Spider-Verse #1 ends on a somewhat ambiguous note involving one of Morlun’s potential victims, that marks another instance of Slott and co. perhaps teasing the inevitable unraveling of the Inheritor’s master plan. But if the sequence is as important as I think it could be, I’m fairly certain it will be referenced or repeated in a future issue of Amazing Spider-Man. That’s still not enough for me to push this comic into the “read or you’ll regret it” pile.