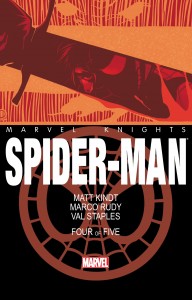 I say, “think,” because I’m not entirely sure. When reading Marvel Knights Spider-Man #4, there were moments of such stunningly awful characterization, I was absolutely certain that there was no way I was reading a Spider-Man comic, just a comic that happened to have the name “Spider-Man” on the cover and featured someone in a red and blue Spider-Man costume running around.

Then there’s that whole situation with the comic’s plot, of which there is still very little to talk of outside of “guy in Spider-Man costume, under the influence of some unknown drug, faces a gauntlet of 99 Spider-Man villains.” I was certainly more forgiving of the lack of plot through the first three issues because it could be explained away as “setup.” But now that we’re in the penultimate issue, it’s time for this story’s hook to become obvious. In other words, I need Matt Kindt’s script to tell me why I should read the final issue of this series. What’s going to be resolved? If the issue’s only drama/revelation is “who” is behind the 99 villain gauntlet, honestly, I don’t really care. I need more than that. What is the meaning of this miniseries? What is the meaning of life while you’re at it?

Seriously, though. I shouldn’t be able to describe the plot of a comic book as simply and glibly as: Spider-Man finds himself on an island where he’s being hunted by (a beautifully illustrated) Kraven the Hunter. Other villains such as Rhino, Jackal, Lizard, Scorpion, Vulture and Tarantula (maybe) show up. Spider-Man goes to Morocco (huh?) and gets shot in the head by Kraven. 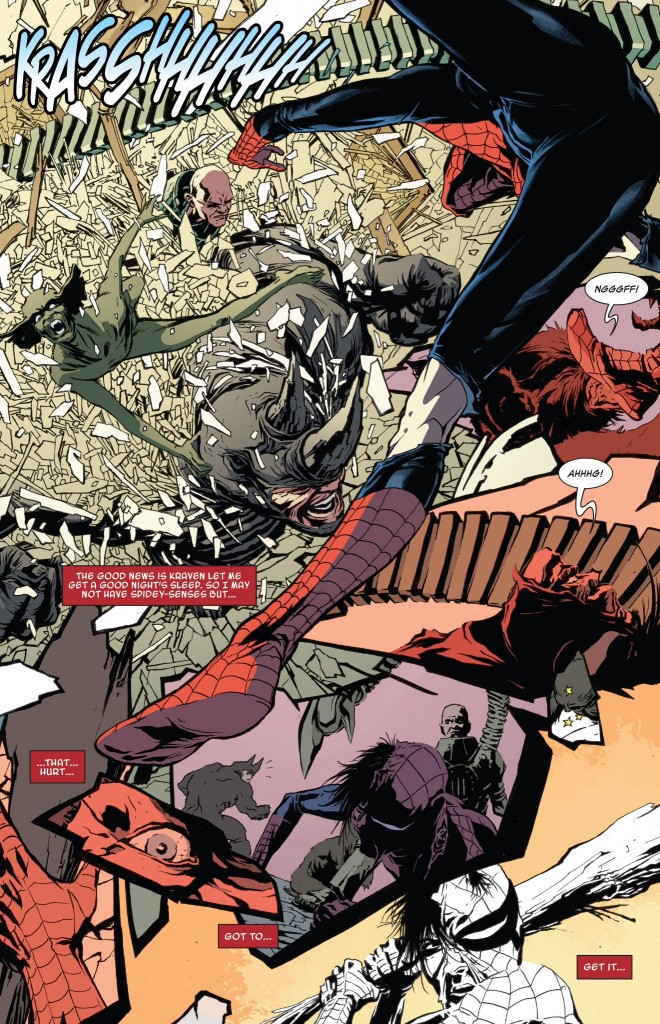 And yet, for its lack of plot, and off-the-wall characterizations of Peter/Spidey – the opening monologue about Peter’s “buddy” Flash reads as if some vapid teenager is recapping his greatest hits of summer days past, as does Peter’s “prom night” analogy, which just simply doesn’t ring remotely true for a guy who was referred to as “Midtown High’s only professional wallflower” – Kindt works in some little moments of wonderfully written prose, further complicating my overall feelings of this series. 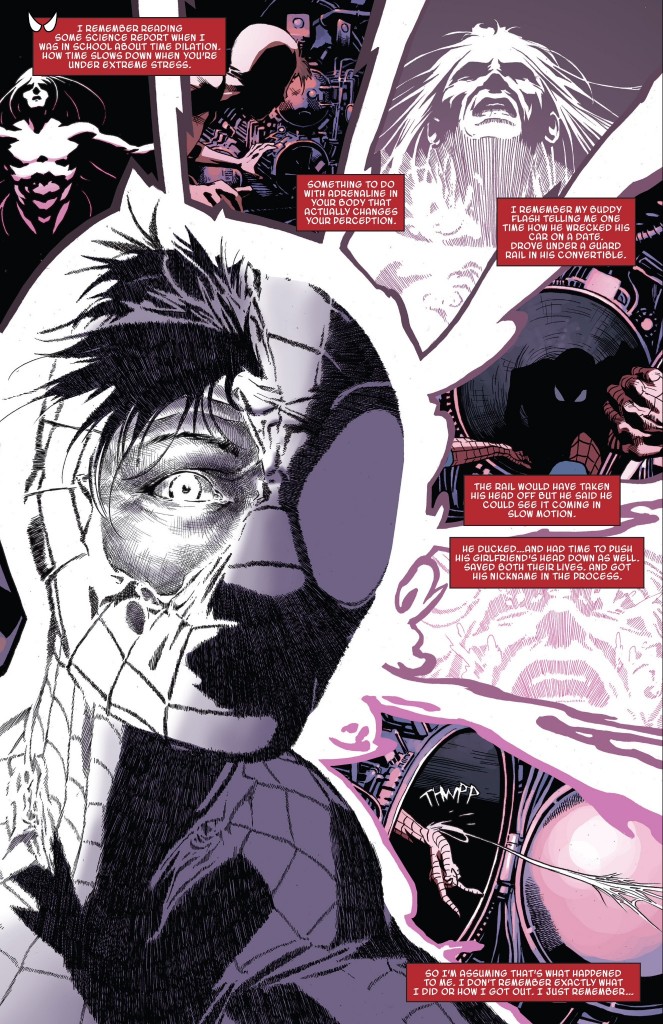 In MKS #4, Kindt scripts a scene about Uncle Ben giving Peter a pocket knife when he was younger. At first Peter likes the knife simply because it’s something he wanted, but as time goes on (and I’m assuming, after Uncle Ben dies), Peter gains a deeper appreciation of the gift, viewing it more as a symbol of resourcefulness and patience, instead of a toy or a gadget.

This passage is pertinent because for the entire story, Spider-Man is dealing with his loss of Spider Sense and a lack of web fluid – certainly two problems he has dealt with many times over in past stories. As he finds himself cornered by Kraven, Spidey is inspired by the knife story, and realizes that even without gadgets and super powers, he’s totally capable of surviving the situation because of his patience and resourcefulness. 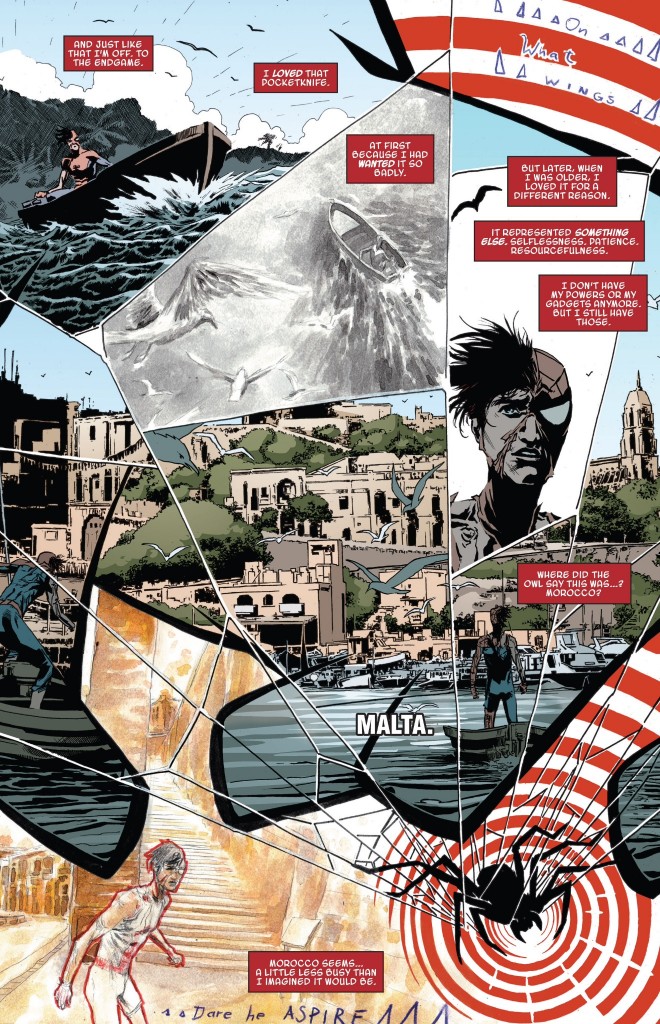 It’s an incredibly elegant and clever take by Kindt on one of my personal favorite Spider-Man personality traits. The stories I always hold in high reverence around here – “If This Be My Destiny,” “Nothing Can Stop the Juggernaut,” “Coming Home,” etc. – almost all deal with a hero who needs more than just powers and gadgets to succeed. The fact that Kindt can make that analogy in a soliloquy about a pocket knife demonstrates why he’s such a talented writer (as someone who has just plowed through my collected editions of Mind MGMT, let me be clear that I think Kindt is very, very good). That’s why I sometimes find myself banging my head against the wall when I’m collecting my thoughts on this series and its script. There are moments of beauty, and moments that inspire utter frustration. I just don’t know if a comic book should be such a roller coaster.

As has been the case since the series debuted last year, Rudy and Staples artwork remains stellar. I haven’t talked a lot about Staples’s colors in earlier entries about the series, but I should mention that his work is the engine that drives Rudy’s eclectic pencil and inks. In MKS #3, the amazing visual of Nitro I featured in my write-up, is totally enhanced by Staples’s color palette. Nitro literally looks like a bomb and the purple hues take the scene to a dystopian level of disorientation. Just wonderful. 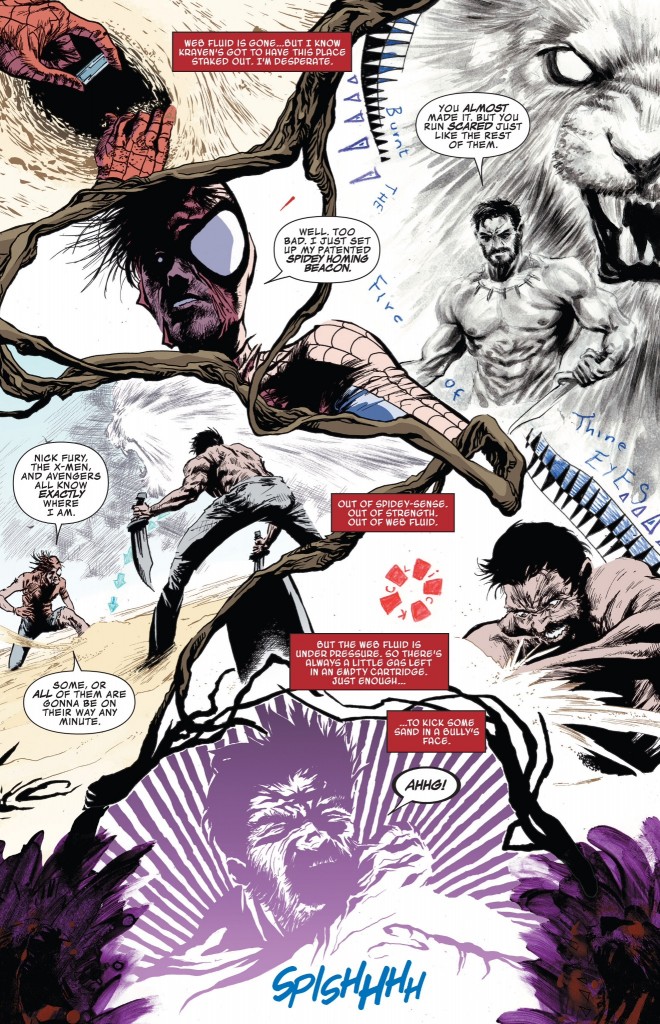 In MKS #4, Staples provides the island with a very warm and inviting color palette, like something I would find in a Club Med commercial or as part of a video package promoting a prize on a game show. Of course, in this comic, the island is a destination of possible death for Spider-Man. Creating such a serene colorscape for this deadly setting only adds to the overall feelings of disconcertedness and anxiousness that engulf this series.