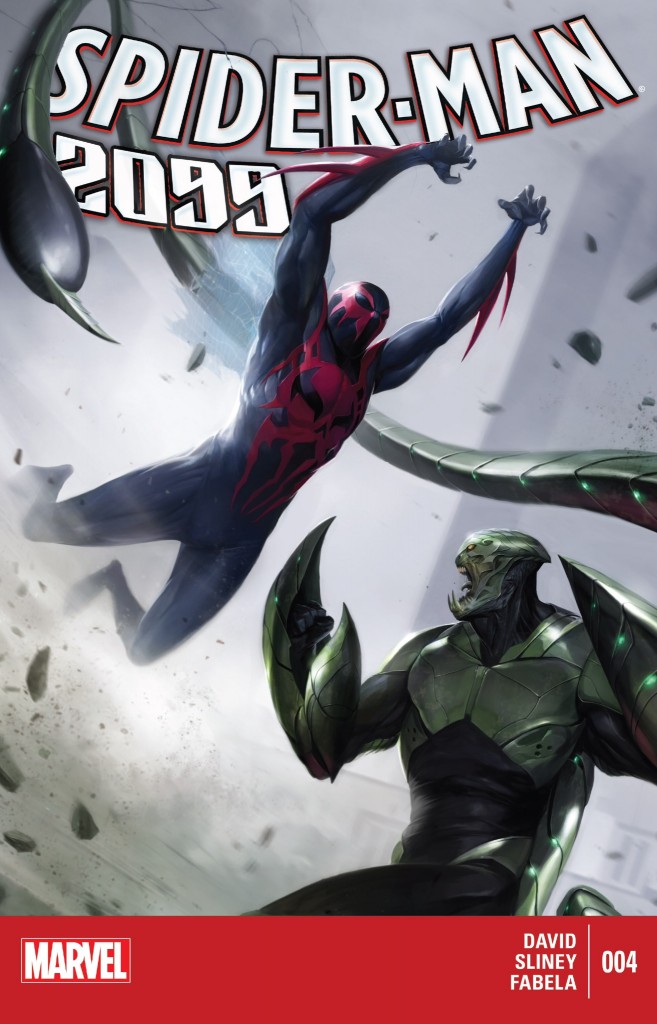 Despite the fact that I’ve been one of Spider-Man 2099’s biggest cheerleaders since the series rebooted over the summer, in the interest of fairness and objectivity, I will absolutely be critical if I feel that an issue misses the mark. To that point, while Spider-Man 2099 #4 is is still a mostly pleasant read, it’s definitely the weakest entry in the series thus far and seems to be the very definition of a placeholder issue with the book looking to be tied-in to “Spider-Verse” over the next few months.

There’s been a high level of charm to 2099’s first three issues that have gone a long way in allowing the series to establish itself as something a little more substantial than just another Spider-Man “B” book, a la Avenging Spider-Man, or even some of the secondary titles like Web of Spider-Man and adjective-less Spider-Man in the 90s. But there is something rather generic about 2099 #4, especially as it pertains to the central conflict between Miguel O’Hara and the long-term Spidey villain Scorpion. The storyline really feels like it could have featured any combination of heroes and villains and not be all that different from what we got, which is something I don’t tend to find in Peter David stories. 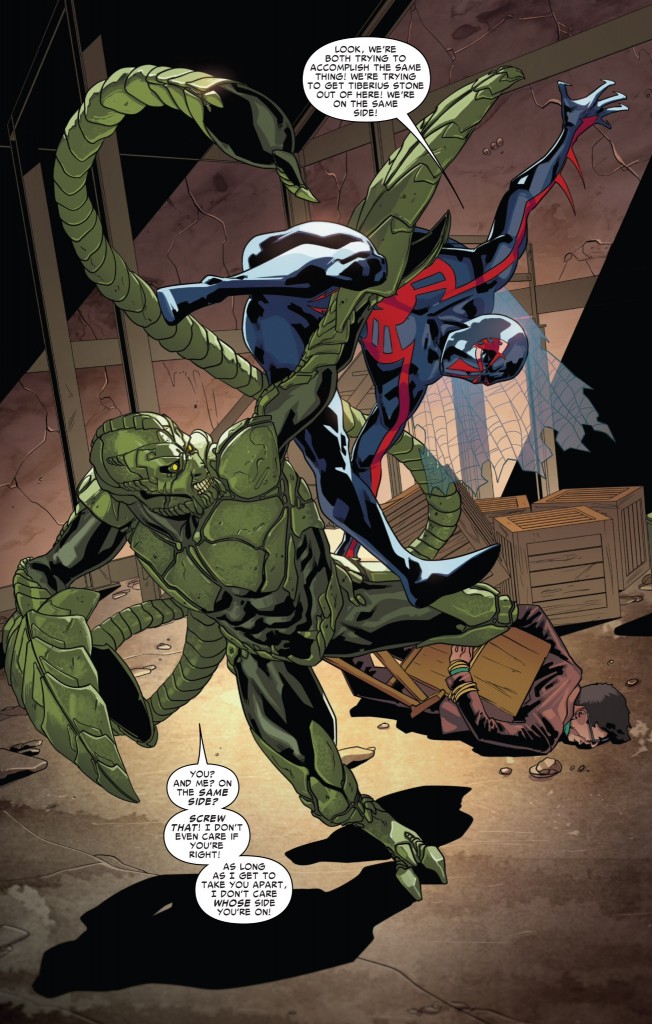 Part of my issue may be connected to the decision to cast Scorpion these past two issues. The narrative itself makes note of the fact that of all the Spidey rogues, Scorpion is not perceived to be a cream of the crop bad guy like Green Goblin or Doc Ock, or even the next tier of guys like Sandman, Vulture or Electro. In the grand scheme of Spider-Man history, there are few, if any, Scorpion stories I can point too as being explicitly great. In fact, if you go back to the character’s debut in Amazing Spider-Man #20, it could be argued that J. Jonah Jameson’s character arc is far more compelling than Scorpion’s.

So the insertion of second-rate, albeit recognizable villain without a new hook for the reader to grab on to felt just a touch too humdrum for my tastes. Given how the overarching theme of this book seems to be focused on Miguel’s future fish out of water scenario, pairing him off with a guy like Scorpion seems counterproductive. 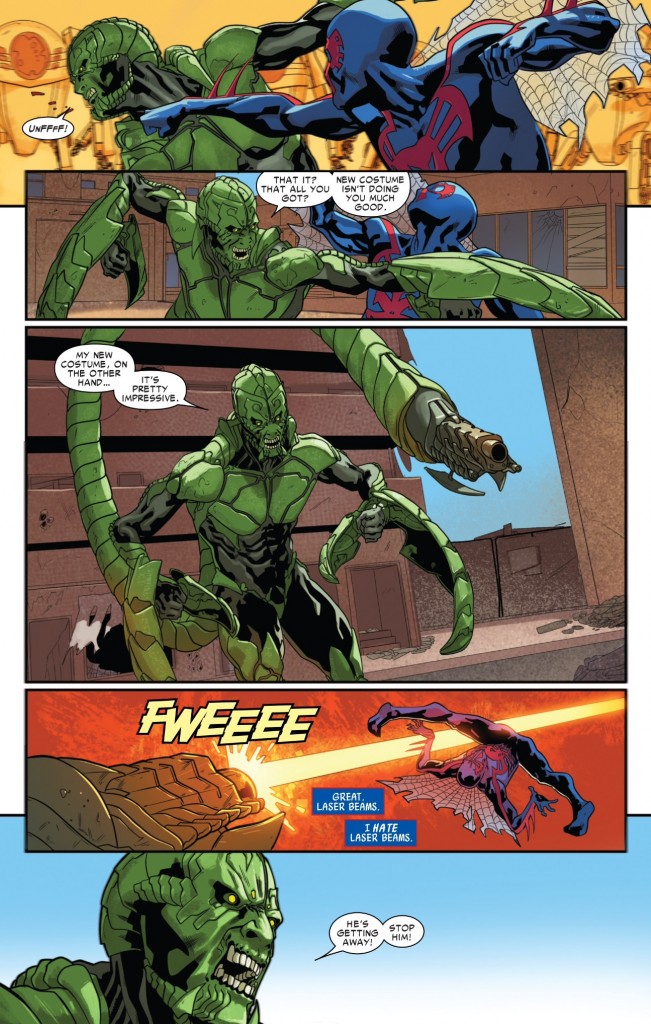 Actually, the biggest, most surprising character moments in the book take place away from Miguel and involve his Alchemax colleague, Tiberius Stone. Now, I’m as big of a fan of character development and growth as anybody, and I even made a point of highlighting how David writes Stone with far more nuance than some other writers have bothered to do. But that doesn’t change the fact that Stone’s personality turn here is a bit too convoluted and unearned. 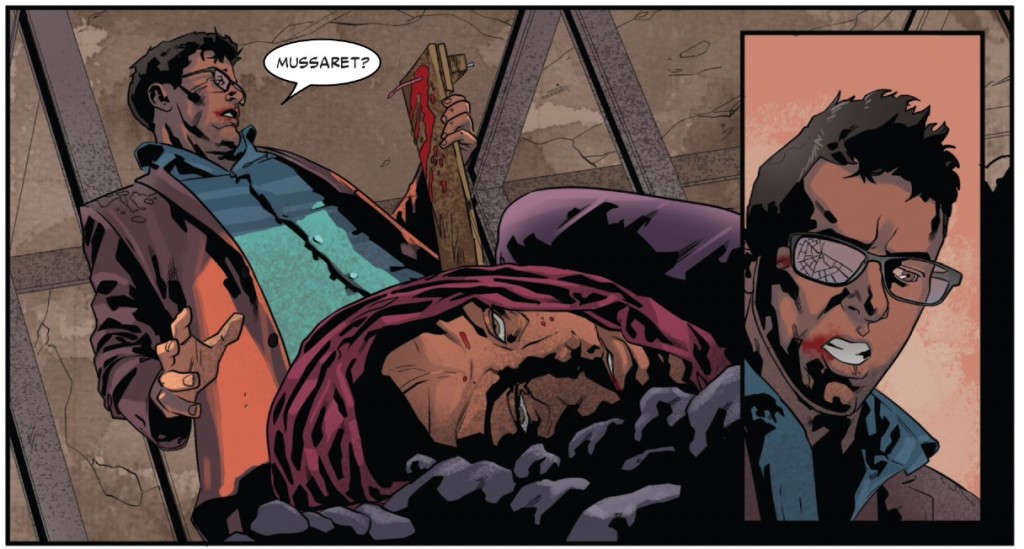 I get that the death of the rebel Mussaret and her abandonment by her own people can be a game-changing moment for even a cold fish like Tiberius, but to have him go full babyface at the end by theatrically pulling out the Spider Slayer deal (and then threatening to fire Miguel if he dared to comment his virtuous behavior to boot) reads like a twist being inserted just for the sake of doing so. I could be horribly wrong, but I didn’t walk away with the impression that Tiberius had turned the corner and in the bigger picture, saw the error of his ways. Instead, my guess is this moment is only referenced again when it becomes convenient for Tiberius to show flashes of humanity and selflessness again. 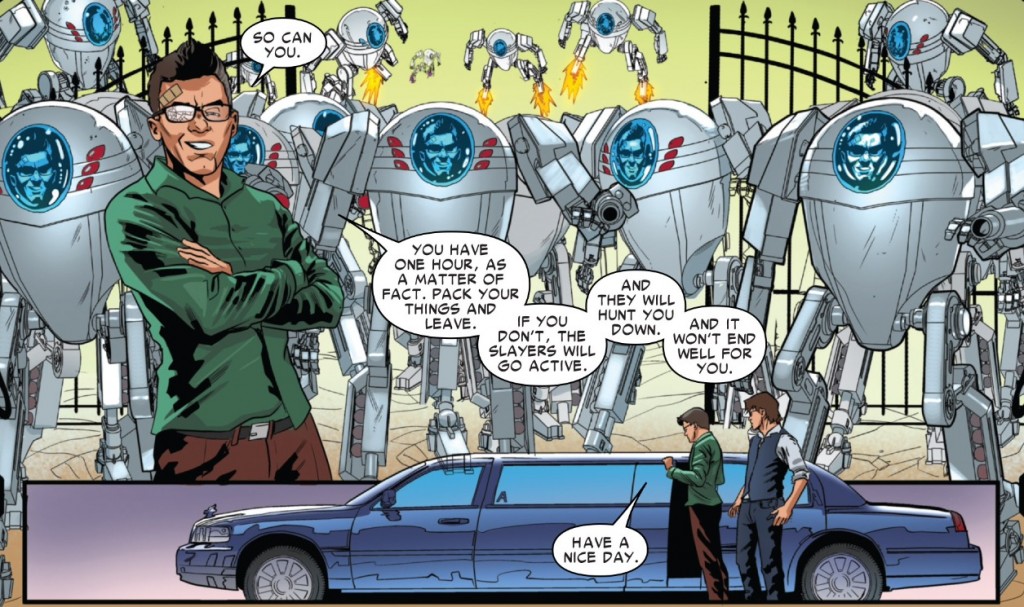 In the grand scheme of things, none of what I’m criticizing should be perceived as some kind of cardinal sin against the book or the creative team, but it does make me a bit more curious to see how effortlessly Miguel and 2099 integrate into “Spider-Verse” once that formally kicks off in a few weeks. One of the many things that impressed me about “Spider Island” a few years back was how spin off books like Venom effectively served both their own stories and the larger arc that impacted all of the Spider-books. Considering how Spider-Man 2099 #4 appears to take the foot ever so slightly off the gas pedal, I’m now going to pay more attention to see how it gets its momentum back from the first three issues.