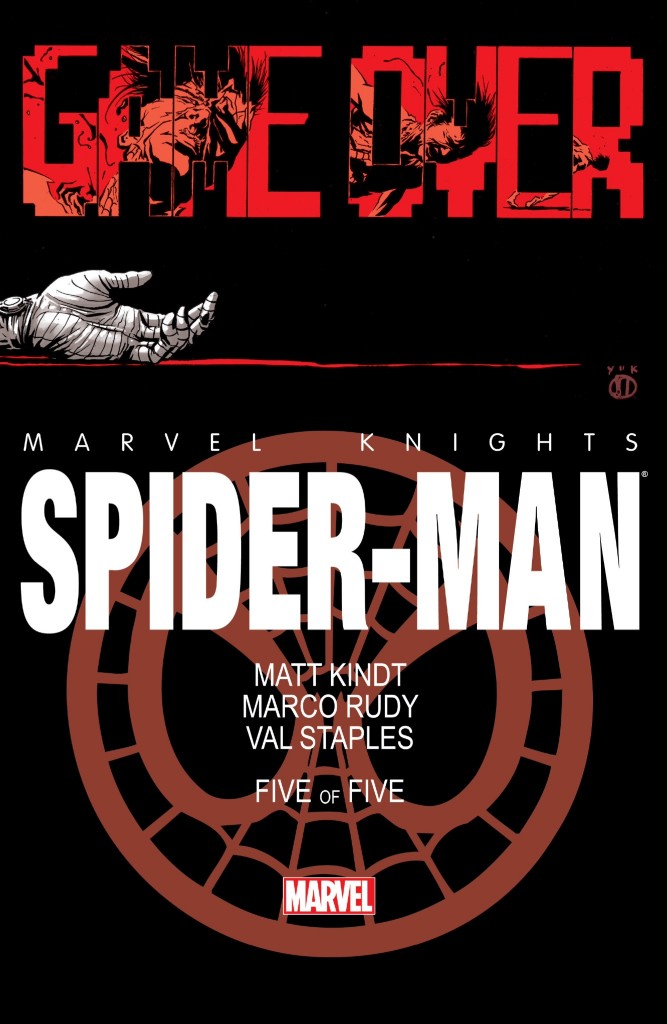 On the final pages in the final issue of the five-part Marvel Knights Spider-Man miniseries, a battle-weary Peter is reminded of a story Uncle Ben told him about a summer where he worked a tedious, laborious job in order to earn enough money to buy Aunt May an engagement ring. Per Peter’s retelling, Ben didn’t even remember any details about the job, only that May’s tears and smiles made it all worth it. 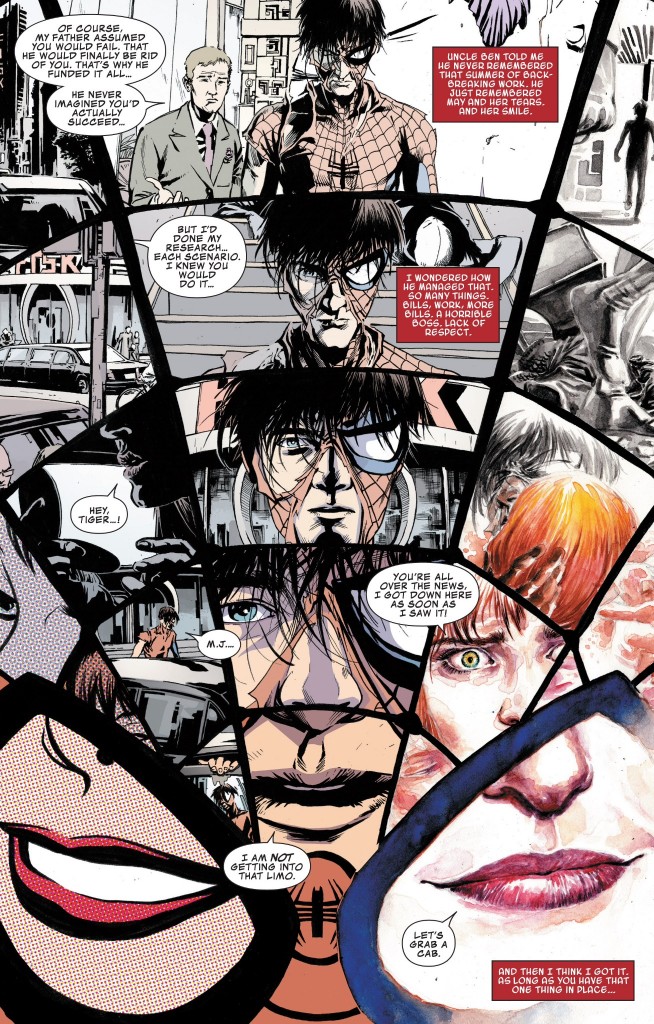 I wish there was a similar pot of gold waiting for me at the end of Marvel Knights Spider-Man, a series I had such high hopes for due to how much I adore Matt Kindt’s writing on the Dark Horse series Mind MGMT, and how amazed I was and continued to be by Marco Rudy’s pencils and Val Staples color-scape. Instead, by the end of this series, all I could manage was a shrug of my shoulders as I quietly placed my comic back in my shoulder bag and pulled out the far more entertaining and fulfilling Superior Foes of Spider-Man.

I feel like in every entry I write about this series, I’ve gone above and beyond the call of duty to find the positives in Kindt’s script since I know he’s capable of doing great things in other corners of the comic book universe. But now that it’s over, I’m at a total loss as to what the purpose of this five-month, $20 exercise was. There have certainly been a number of Spidey stories published over the past decade that were worse and more damaging to the franchise, but I don’t remember the last time I was this disappointed by a story.

Going back to the very first issue of this series, I have harped on this idea that while this had the potential to be a cool concept, there was something about the tone of Kindt’s script that made this feel like I wasn’t actually reading a story about Spider-Man, just a story with some guy dressed up like Spider-Man. Some of this could be explained away by the outrageousness of the situations Spidey kept finding himself in – a haunted mansion, a submarine, an airplane and a deserted island – not to mention the fact that he was apparently on some kind of drug “trip.” But this series never found a way to shift gears and make me believe that Kindt had any right to write a Spider-Man story outside of the fact that his indie success probably makes him a very desirable talent for both of the “Big Two” comic publishers.

For this issue’s example of Kindt’s tone deafness, on the opening page Peter describes his famed Spider Sense as being similar to “death metal.” What? I just … can’t… Death metal? Because that’s the sensibility that has long been missing from this character during the years that guys like Stan Lee, Roger Stern, Tom DeFalco and J.M. DeMatteis were writing him: allusions to bands like Megadeth and Slayer. 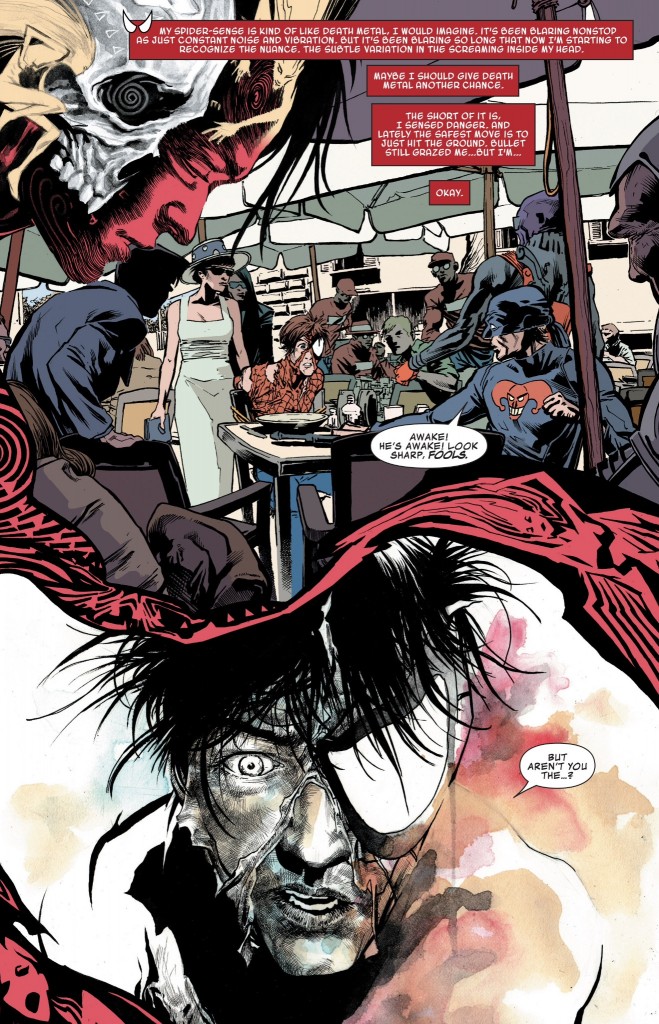 Ultimately, “99 Villains” was about just that – a hodgepodge of villains, some classic ones, some obscure ones, and some phony ones dressed up like classic villains (like the blink and you miss it Green Goblin/Hobgoblin sequence in Marvel Knights Spider-Man #5), all leading to the payoff that Wilson Fisk, aka, the Kingpin, and his son Richard (aka, the Rose), set the whole thing up to screw with Spider-Man … or was it to set up all these villains so that the Fisk family could “put them all away?” There’s a rambling soliloquy from Richard at the end that says as much, but it registers as white noise for me at this point – much like that monotonous assembly line job that Ben worked that summer. 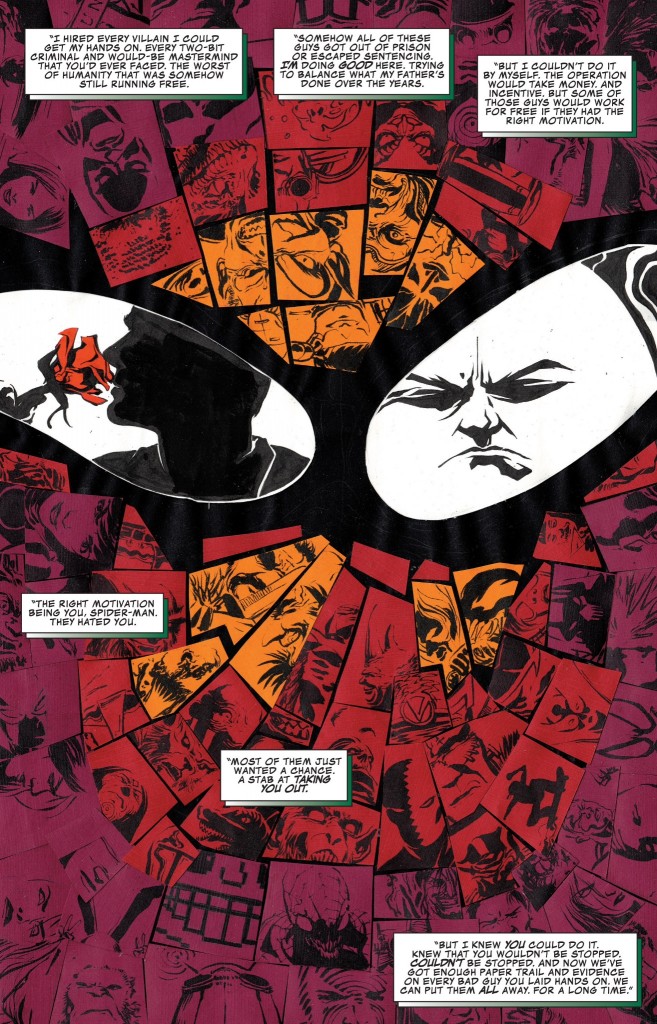 The art continues to be awesome. Rudy and Staples continue to create inventive layouts and character interpretations, with a mishmash of styles and coloring techniques that make every page an experience. I love the sequences where Kingpin and Spidey are fighting and Staples uses just reds and blues on the page before it shifts to an all black and white image. 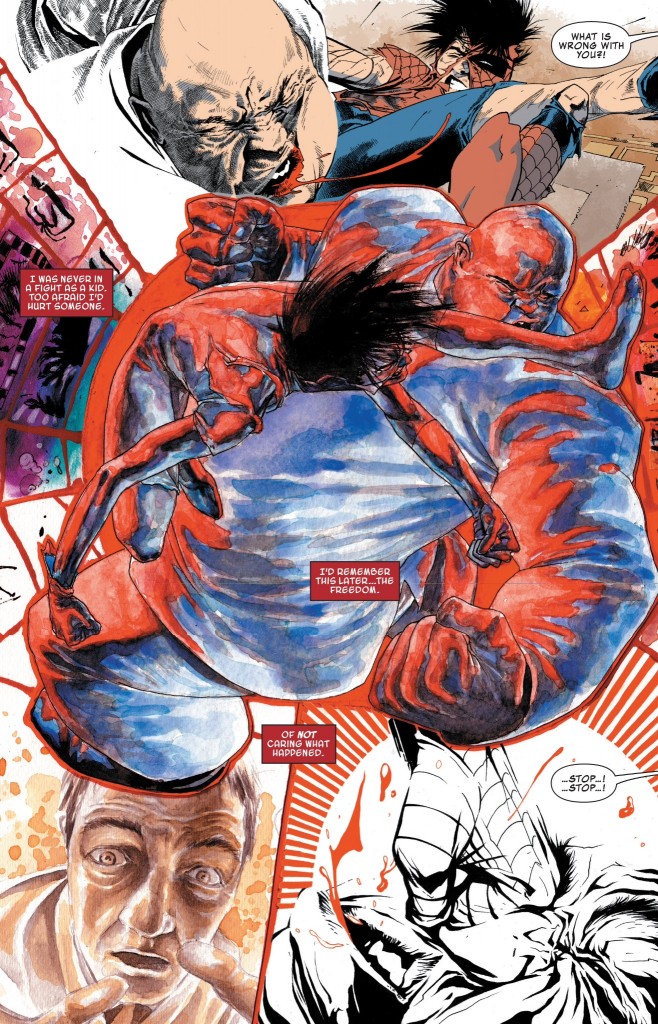 In one “you’ve got to be kidding me” double-page spread, the art team busts out a fight sequence with Spider-Man going against, what I believe to be (I’m not counting), all 99 villains. It’s unquestionably an impressive feat and Rudy is both brilliant and insane for providing that level of character detail in his pencils. 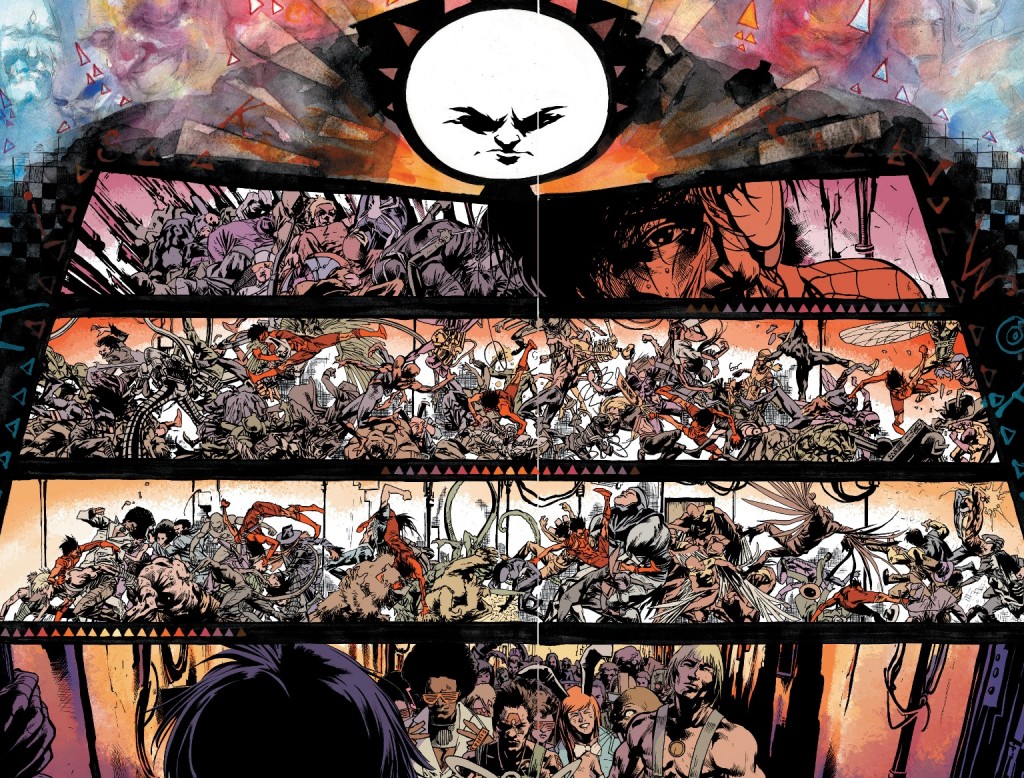 But I stop short of saying the fantastic artwork Rudy and Staples put forward in every single issue was enough to give me a favorable impression of the series as a whole. Not when I don’t recognize the characters I’m reading about. I feel bad dismissing a clear-attempt by Marvel to do something more experimental with one of their big franchises, but there has to be a happy medium between something that’s edgy and different with a purpose, and something that’s just the comic book equivalent of death metal.