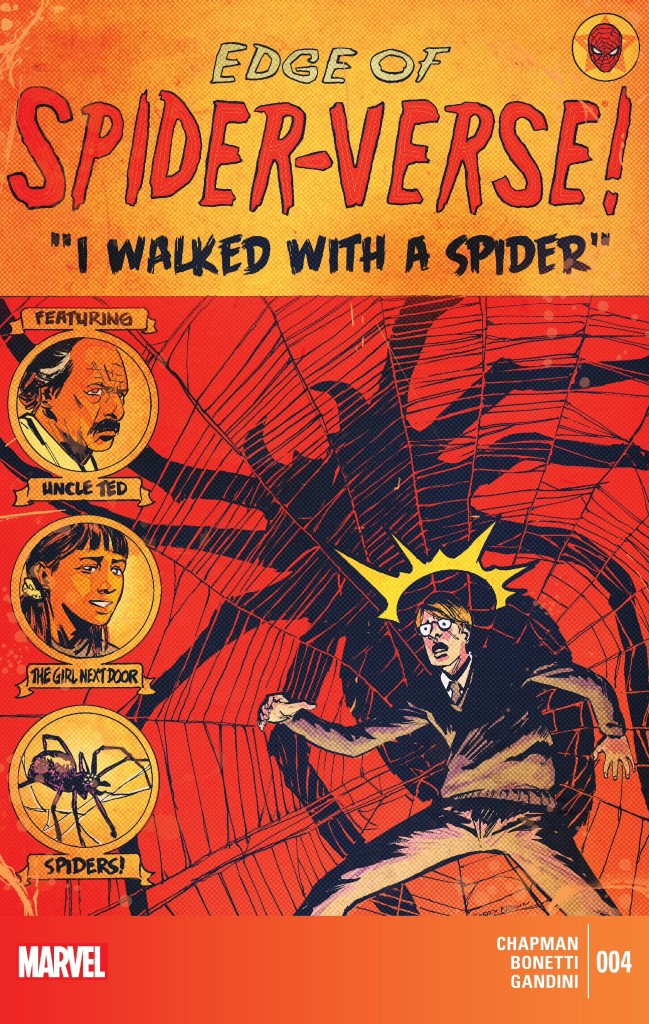 I think I’ve written this once or twice before on this site, but before I start talking about Edge of Spider-Verse #4 by Clay McLeod Chapman and Elia Bonetti, I should mention that ever since I was a child, I’ve been incredibly squeamish about horror movies. Even to this day, I have a hard time sitting through a gory and bloody movie, especially if the film involves a creature or some kind of homicidal maniac jumping out of closets or from under beds to murder/eat/maim an innocent person (or a couple of teenagers having sex).

So naturally, one of these Edge of Spider-Verse stories is paying homage to the genre of “geek” entertainment I like the least.

Actually, when you think about it, the whole premise behind Morlun, the big bad of “Spider-Verse” is that he’s this all-powerful vampiric monster that feeds on the totemic powers of all of the “spider” people. But there’s obviously a difference between a character that acts like a monster, or can be interpreted as a monster, and a character that grows extra arms and eyes and eats innocent people because he IS a monster. 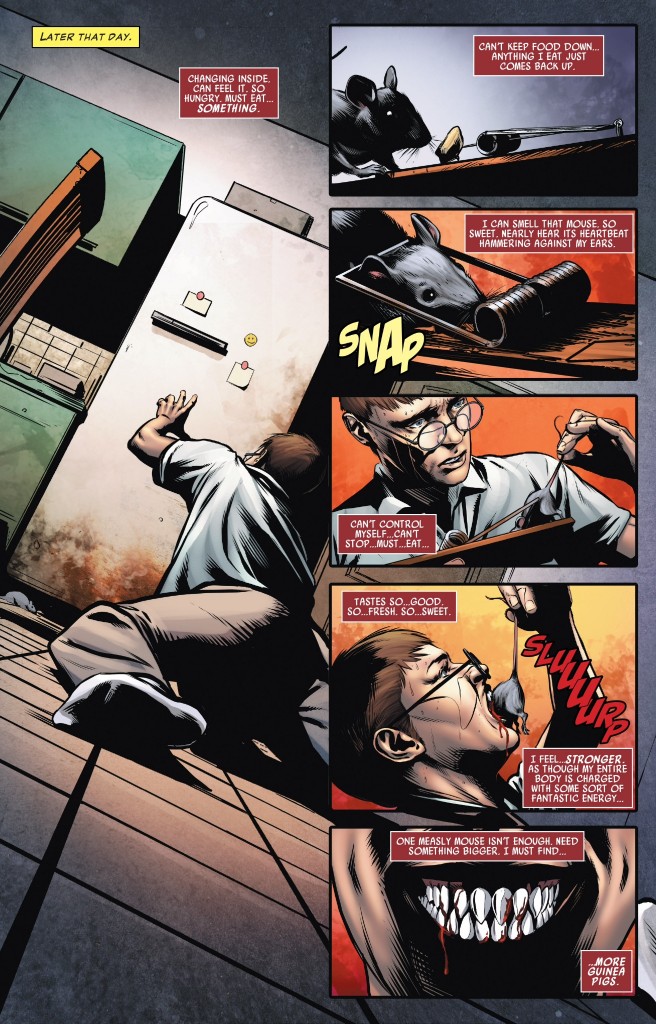 In other words, I couldn’t help but get that weird, uneasy feeling in my stomach while reading this comic this week.

Fortunately, despite all of my personal hang-ups, I actually found Edge of Spider-Verse #4 to be a very interesting read – especially when read in the context that the comic is actually making some very valid and worthwhile points about the nature of a universe of superheroes that was mostly constructed in an era of nuclear/geopolitical paranoia.

A very well-known issue of Fantastic Four in the 1960s famously wrote of the Thing, “this man this monster.” But it’s those broad strokes of humanity applied to Marvel’s cast of characters that made the company such an industry phenomenon in the 1960s. If you were to take away the uniqueness and creativity of Stan Lee, Jack Kirby and Steve Ditko, what you would actually be left with is a comic book world filled with straight-up horror movie monsters like Patton Parnell in Edge of Spider-Verse #4. We love Peter Parker because he’s so relateable and human. But if you ignore Peter the personality and just focus on the fact that he’s a teenager who was bitten by a radioactive spider, giving him bizarre powers and abilities, you’ll quickly realize that what’s left behind is the very definition of a monster. 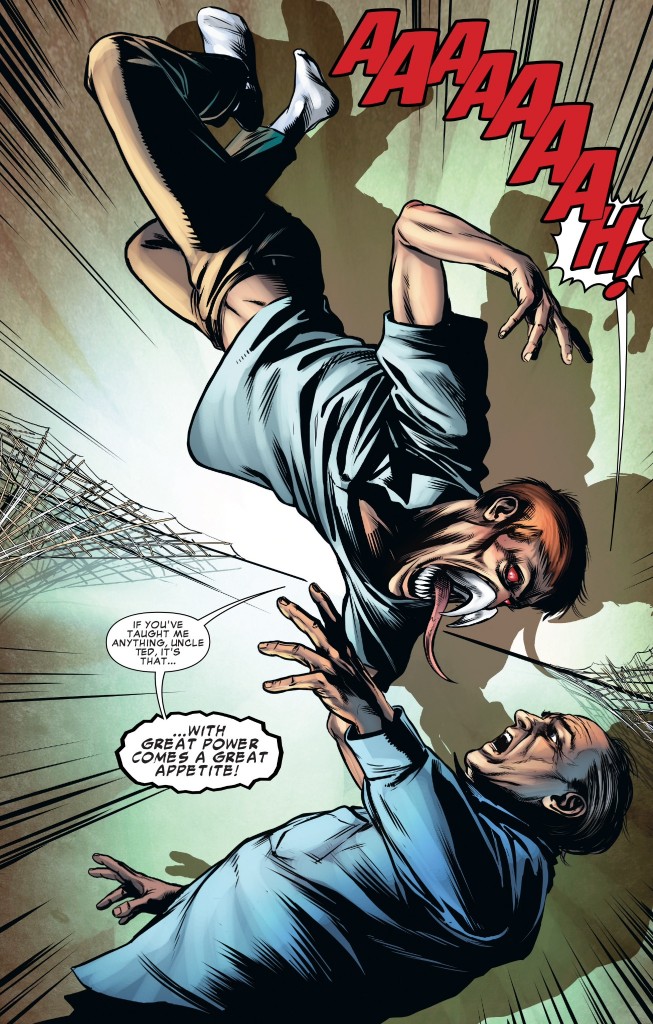 Edge of Spider-Verse #4 even has a moment of meta where Patton, who is physically mutating into a hideously horrifying blood-sucking creature, wonders if he could just use his powers to be a superhero before quickly dismissing it. Not because he’s selfish or cocky, but because its patently absurd in this parallel world that Chapman and Bonetti have created for a teenager who is transforming into a human spider to be anything other than a monster. Just like if the person standing next to us in line at the grocery store or the movie theater grew wings and extra eyes, we would run away in terror because we would be standing very close to an actual monster.

Through that lens, Edge of Spider-Verse #4 is quite the deconstruction of the superhero comic book genre. Themes and tropes that we tend to accept as being sources of wonder and fantasy in these comics are turned around by Chapman and Bonetti as a blood-curdling nightmare. 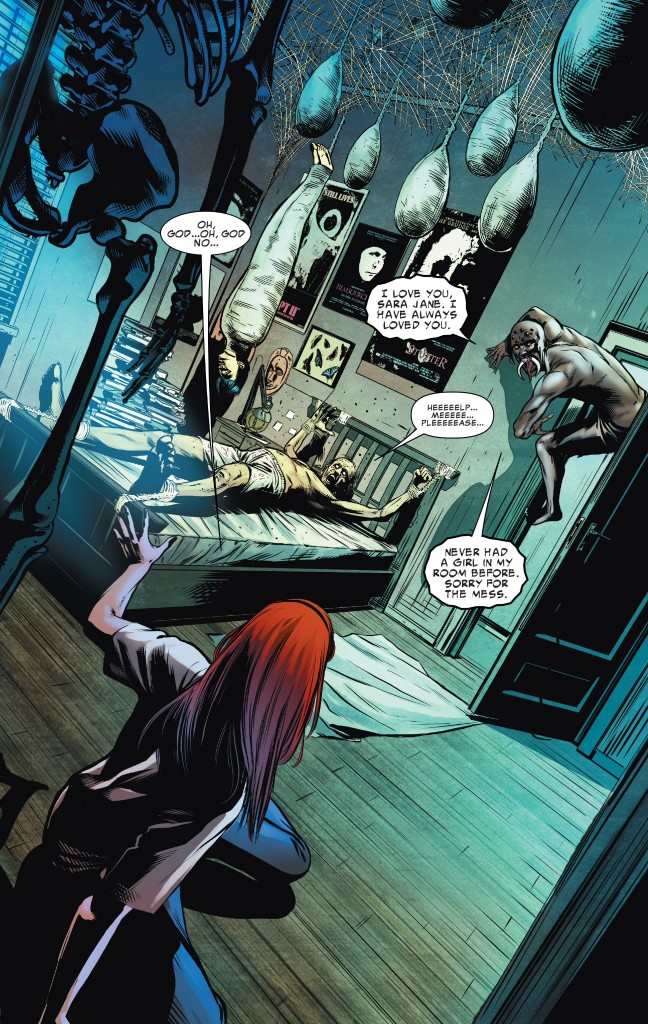 Speaking more specifically to Spider-Man, a little bit of characterization that I found quite wonderful in this comic relates to how Patton is clearly a disturbed individual, even before he his bitten by a mutated spider. When people talk about the mainstream Peter, they often dismiss him as a socially awkward loser, but that’s really a bit of a misrepresentation of the character. Peter has his detractors and bullies, but he’s ultimately a fairly well-adjusted and bright kid, who is also charming enough to land himself either Gwen Stacy or Mary Jane. In Edge of Spider-Verse #4, Patton leers at his neighbor Sara Jane from his bedroom window. And in kind, Sara appears to interact with Patton purely out of pity, especially when we see her overhearing the boy getting beaten by his uncle. Peter might be Midtown High’s “professional wallflower,” but he’s not the social pariah that Patton is.

Still, even with some of the interesting points this comic made, I definitely think Morlun’s presence at the end of this comic was a necessary development. In a perfect world, all of these characters being introduced in this mini would get some kind second chance at making it once “Spider-Verse” comes to an end in a few months. But given my general squeamishness, I think I’ve seen all I need to see from Patton and Sara Jane.