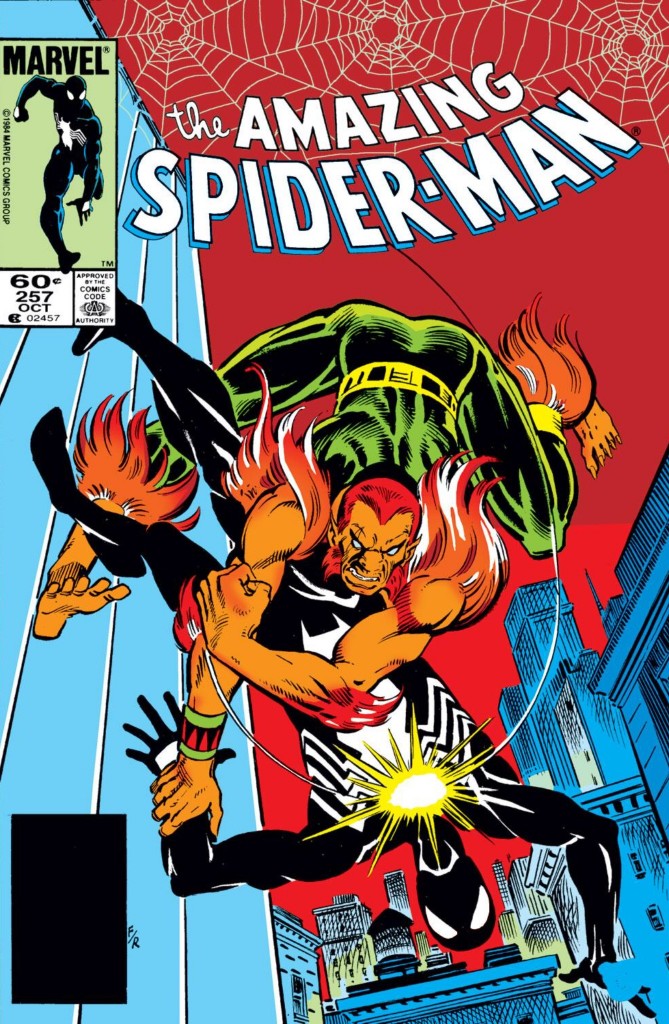 In many ways, I’ve been waiting all summer for my opportunity to write about this one specific issue, and despite the fact that I’m almost always let down by heightened anticipation, Amazing Spider-Man #257 is as good as I remember it being.

For me, this comic is when the Tom DeFalco/Ron Frenz era officially kicked it into high gear, putting the much ballyhooed (and rightly so) Roger Stern and John Romita Jr. days in the rearview mirror by announcing, “hey, DeFalco and Frenz know and love Spider-Man and are totally capable of delivering a classic story.”

Last week, I questioned if maybe DeFalco was decompressing his script a bit over the span of ASM #253-256 because outside of a few little teased details, the pacing of these three comics felt much more leisurely when compared to how the “Alien Costume Saga” opened, and its final two chapters (my thoughts on ASM #258 will be up on Chasing Amazing next week, ‘natch!). 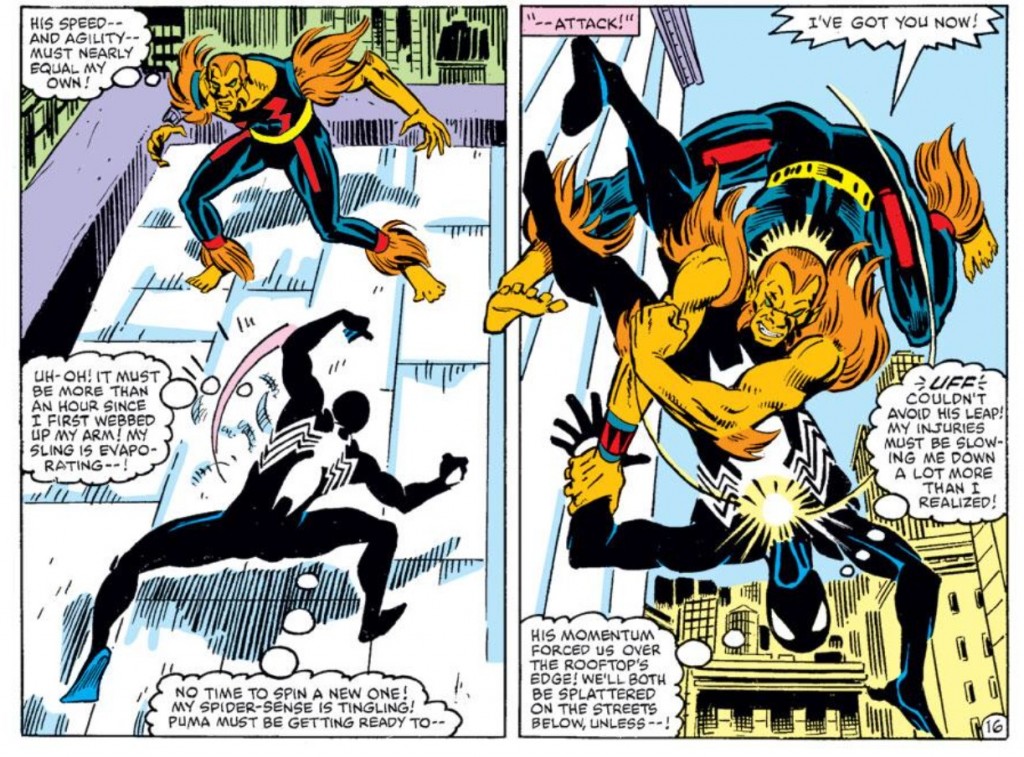 There’s just so much going on in ASM #257 – all of it tremendously good and joyful to read about despite the fact that this is a 30-year-old comic that I’ve read probably a dozen times over the years. DeFalco’s script fires on all cylinders as a number of unresolved plot threads are addressed in assertive and exciting fashion (Spider-Man and Black Cat, Rose and Kingpin, Peter and Mary Jane, the Puma and the alien costume), while a whole host of new plotlines are introduced, inevitably setting up the next wave of stories in the Spider-books. That’s quality comic book writing folks. And let’s not forget Frenz, whose Ditko-influences are all over these comics, which really lends to the “classic” look and feel of ASM #257 and the “Alien Costume Saga” as a whole.

The first fist pump-worthy moment comes during the opening battle sequence between Spider-Man and Puma. The comic opens where things left off at the end of ASM #256 – Spidey is practically blacking out from the pain of his separated shoulder and the Puma is slowly stalking his prey in order to collect on the hit money being offered by the Rose. Things look absolutely dire for Spider-Man when the Black Cat flies in from out of nowhere, knocking the Puma back on his feet. With some well-timed bad luck powers, the Puma eventually retreats, and Spider-Man can get home and rest up.

Considering I recently spent a month reflecting on a number of Black Cat stories from the past, I think I can safely say that her arrival in this issue is the most dynamic and riveting the character has been written in terms of being a “superhero.”

It’s funny that I should stumble upon this moment at this exact time. After Sony announced last week that one of its upcoming Spider-Man films would focus on a female character, somebody published an extraordinarily unfair article about why the Black Cat should not be spotlighted. The author argued that the character is nothing but a Catwoman ripoff that only exists to be an overly sexualized female character by placing her in a revealing outfit and having her flirt with the male hero all the time. I don’t disagree that there are some creators that definitely hyper-sexualize Felicia (along with pretty much every other female character in comic books), but this one author’s assessment was absolutely ignorant in how it glibly dismissed the number of other quality stories involving Felicia. Her role in ASM #257 being one of them. I think it’s pretty clear that DeFalco and Frenz have characterized Black Cat as being the primary reason that Spider-Man is alive in this instance. She completely holds her own against the Puma, and does so without telling hackneyed cat puns, or waving around her breasts or behind.

Felicia even has the wherewithal to call Spider-Man out on his mysterious costume in this issue. While it might be odd for Black Cat to suddenly be a beacon of responsibility, she’s intelligent and aware enough to realize there’s something not quite right about the way this black ooze is stalking her boyfriend. Considering how Peter finally follows through on his promise to talk to Reed Richards and the Fantastic Four about his new costume in the next issue, that’s a second point for Miss Hardy in this comic. 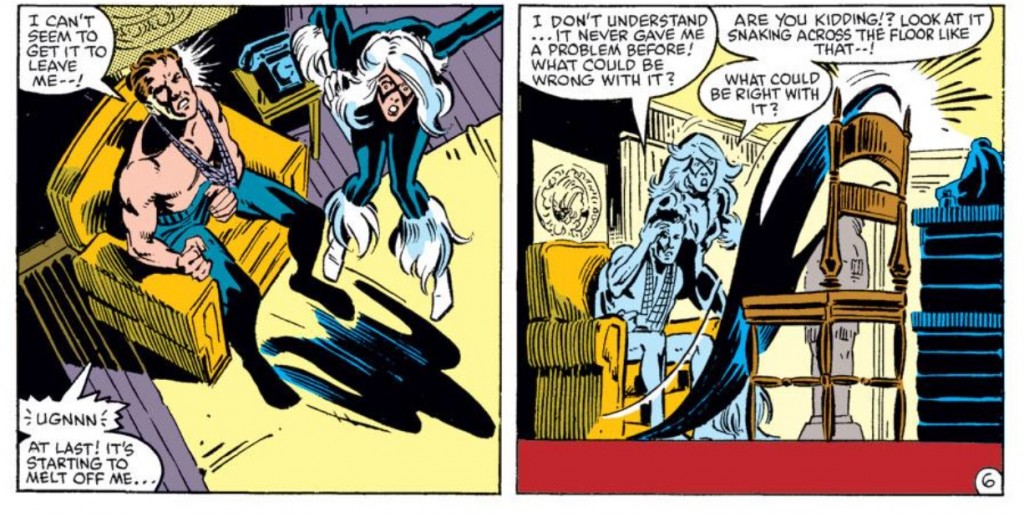 Of course, there’s more than just great Black Cat moments that make this comic a special one. Even something as blasé as resolving the Rose/Spider-Man/Puma storyline – by having the Kingpin pull rank on Rose and telling him to call off the hit on Spidey or face dire consequences, evolves into a “heck yeah!” moment when the Hobgoblin makes his first full appearance in costume since he disappeared in ASM #251. The Hobgoblin’s offer to form an alliance with the Rose is a great way to build tension to the New York City gang war that is now officially brewing. The sequence also helps develop the Rose into more of a legitimate threat, especially after it looked like the Kingpin had cut his legs out from under him. 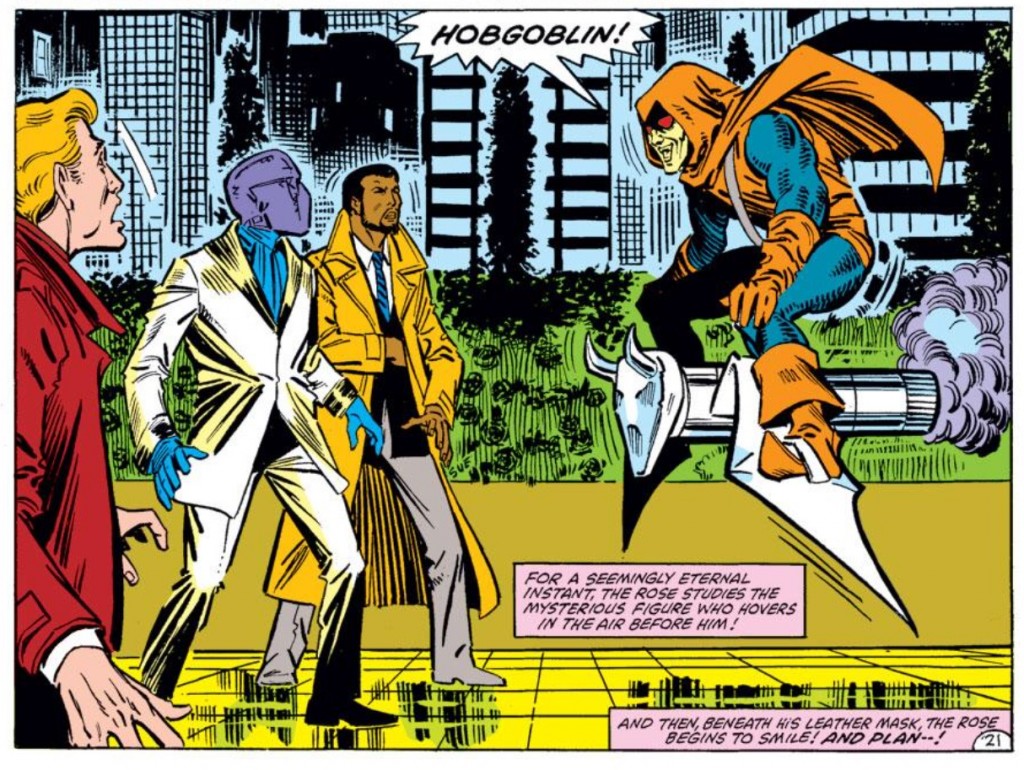 But the biggest shock moment in ASM #257 comes on the very last page when Mary Jane, who was locked out of Peter’s apartment when the Puma unexpectedly attacked him, confronts her long-time friend/boyfriend about a piece of information she’s known about “for  years:” that Peter is secretly Spider-Man.

There are so many things I love about this moment. Probably the best place to start is with Frenz’s artwork in the actual panel where MJ admits she knows Peter’s secret. Peter’s absolutely stunned expression, complete with the half-Peter/half-Spider-Man illustration and his blaring Spider Sense to really drive home the magnitude of what Mary Jane has just said in one of the greatest cliffhanger endings in Spider-Man comics history. 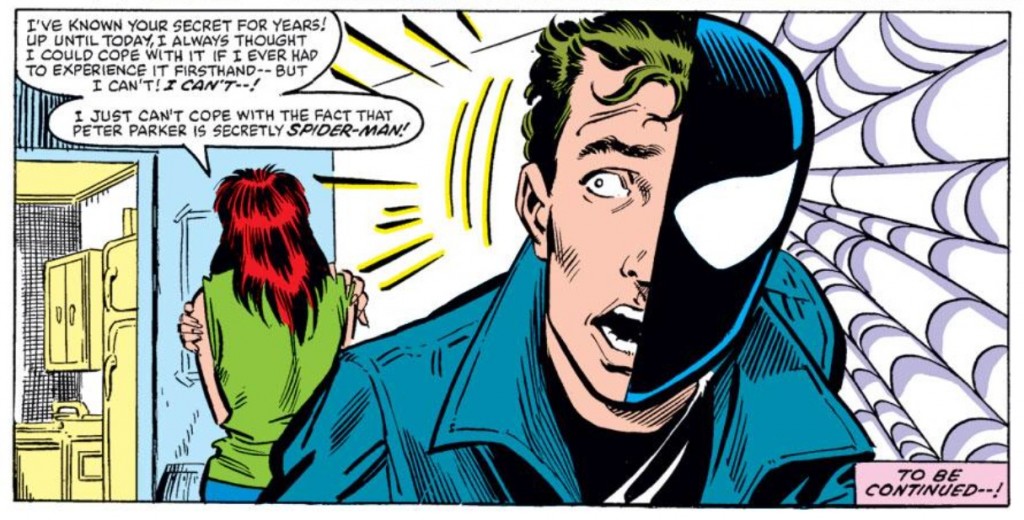 Then you add in Mary Jane’s body language in the background, her shoulders sunk as she’s almost holding herself up because of the pain she’s feeling in confronting Peter about his secret. It’s an incredibly realistic depiction of what a conversation would look like between two people when both are feeling shame but for completely different reasons. MJ is dispirited because it took her believing that her friend might have been seriously injured or killed by some random villain for her to finally address the big elephant in the room. While Peter obviously doesn’t know how to address MJ’s matter-of-fact assessment (you can’t even call it an accusation, because she’s not asking him if he’s Spider-Man).

Beyond the way the scene is portrayed visually, I’ve always loved the fact that MJ was able to ascertain this information herself, and there wasn’t some kind of grand unmasking in front of her by Peter. As much as I also have a fondness for the Ultimate Spider-Man issue that is just Peter and MJ talking in Peter’s room as he tells her about being Spider-Man, I feel that the ASM version of this reveal does more for Mary Jane’s character over the long haul. DeFalco, without a doubt “gets” MJ as a character, and is probably only rivaled by Gerry Conway and J. Michael Straczynski in giving her some amazing moments in comics over the years.