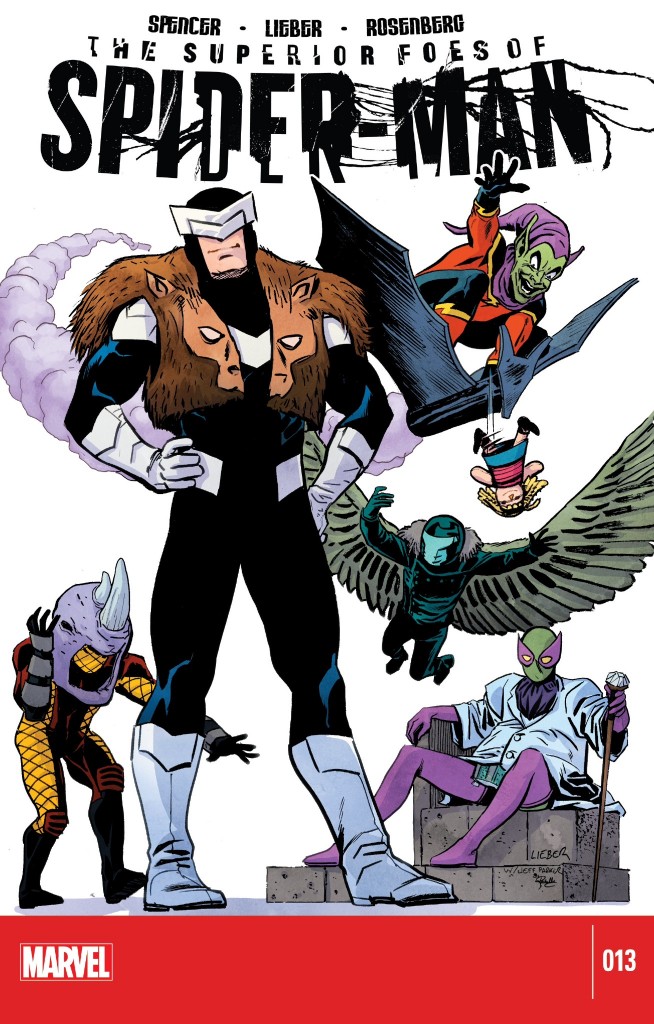 It’s been so long since we got a transition issue of Superior Foes of Spider-Man (those two standlone stories from a few months ago don’t count), that I almost didn’t know what to make of the recently released issue #13.

After the hijinks of last month’s Superior Foes #12, which included the random and awesome formation of the Sinister Sixteen – unquestionably the most awful and hilarious assembly of supervillain talent in the Marvel Universe – Nick Spencer and Steve Lieber cool things off a bit with their latest offering. They still manage to work in some of their trademark jokes and sight gags, including another clumsy exit from a building courtesy of Abner Jenkins, aka Mach-VII. But outside of a rather intriguing character interaction towards the end of the book, the comic doesn’t provide a heck of a lot for me to grab on to and cherish, and instead its focus seems to be more on setting all of the pieces into place for what I’m assuming will be the final narrative arc of the series (despite the fact that in every solicitation, the series gleefully announces its non-cancellation). 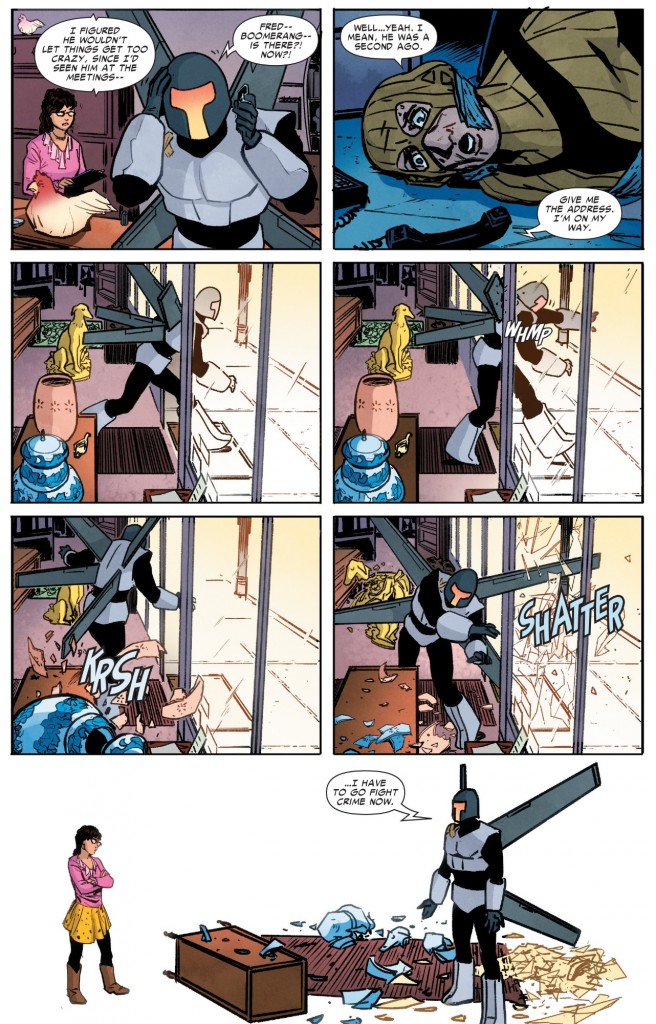 Does that mean I didn’t enjoy the comic? Of course not. Provided that Spencer and Lieber are manning the ship together, Superior Foes has emerged as one of those series that is so much fun, that even when the narrative doesn’t lead anywhere exciting, it is still a better read than almost everything else in my pull list.

With that said, Superior Foes #13 features a number of scenes that feel a little “been there/done that” in terms of the larger overall story. We have Boomerang lying in wait in the sewers as Overdrive and Beetle make their getaway with what they think is the priceless portrait of Victor Von Doom, which ultimately leads to yet another uneasy alliance among the remaining members of the Sinister Six. Plus, we get a little bit more clarity as to the actual relationship/romance between Beetle and Overdrive, which I honestly thought had been established in an earlier issue of the series. It’s certainly a good thing to explicitly state where everybody stands – in poor Overdrive’s case, it looks like any love he holds for Beetle is unrequited – but I don’t exactly follow why Spencer and Lieber chose this stage of the game to tackle this subplot. 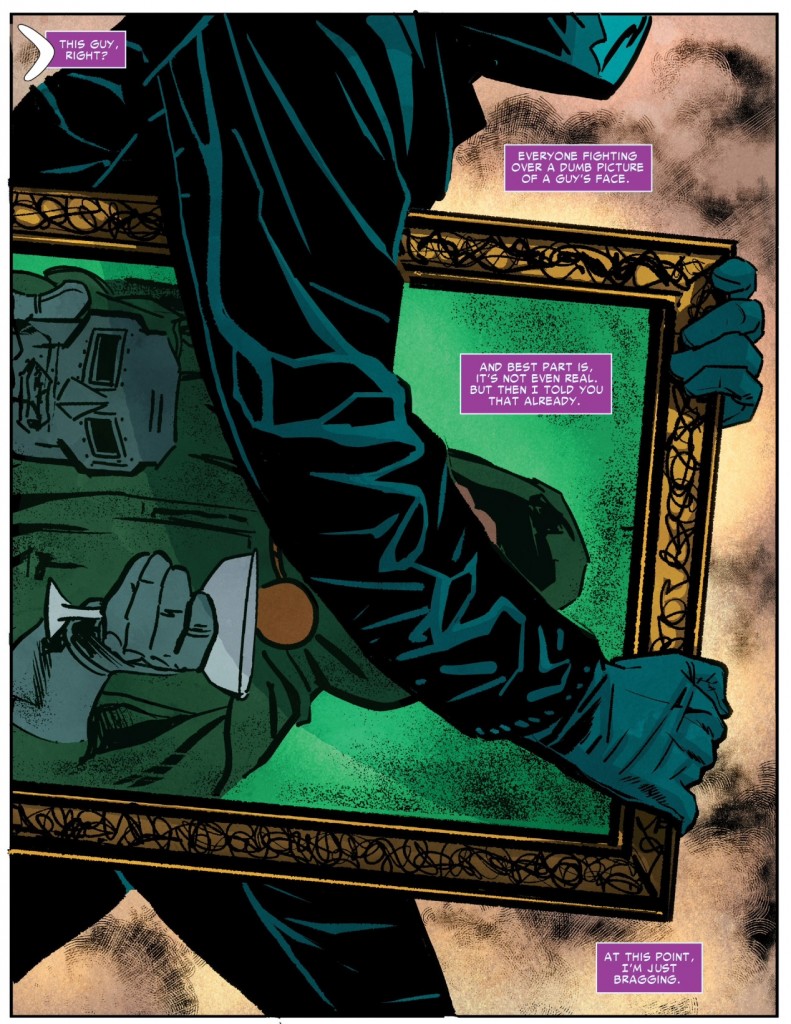 Probably the most engaging part of Superior Foes #13 is the character development Spencer and Lieber are providing for Shocker. In fact, just based on page count alone, Superior Foes #13 is by far the most Shocker-centric issue the series has to offer. Giving this character some screen time is very welcomed since, for the most part, Shocker has mostly been depicted as a one-note (but hilariously funny) coward.

Of course in typical Spencer/Lieber fashion, what’s really amazing about Shocker in this issue isn’t just the fact that they spend some needed time developing his character, but it’s how they go about it. Shocker is now exclusively interacting with a nasty, bullying disembodied head of a former mob boss (that is being stowed in a bowling bag that smells like butt cheeks). I find it absolutely riveting that Silvermane has evolved from demanding Shocker order him a pizza, to all but giving him the Don Corleone-to-Johnny Fontane speech in the epic opening of The Godfather. 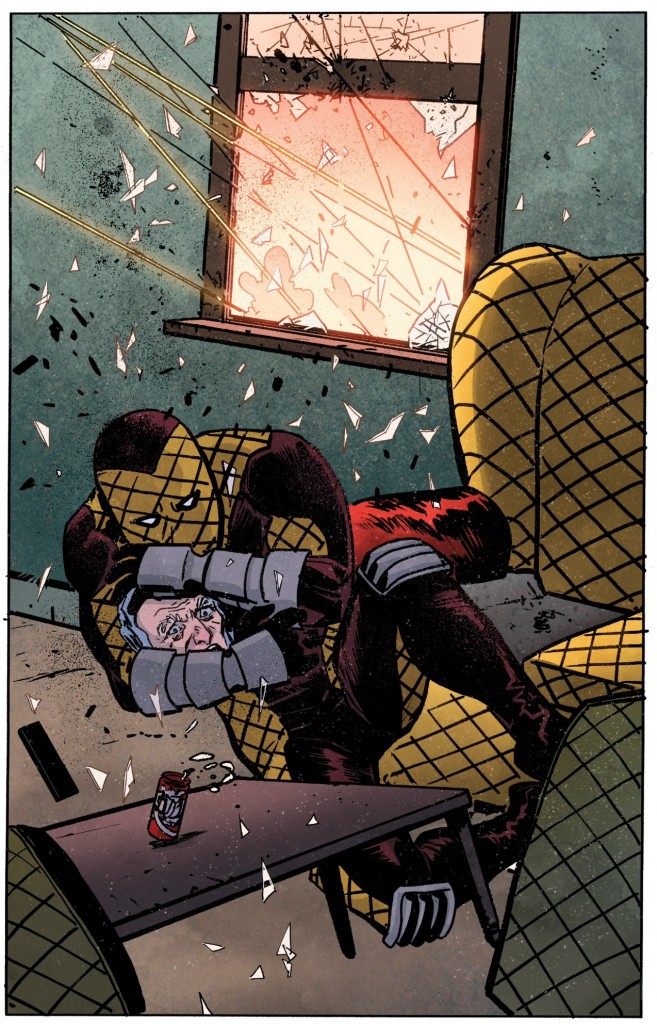 Points also go to Lieber’s illustration of Hammerhead shedding a tear for his old boss’s head flying away with shocker.

With the issue’s ending suggesting that all of the separated members of the Sinister Six are finally going to come back together again in the near future, it’s going to be interesting to see what kind of character interactions we get next issue – especially between Boomerang and Shocker.  I also suspect that the narrative will regain its breakneck, rapid-fire pacing once the new status quo is established in (I assume) Superior Foes #14.