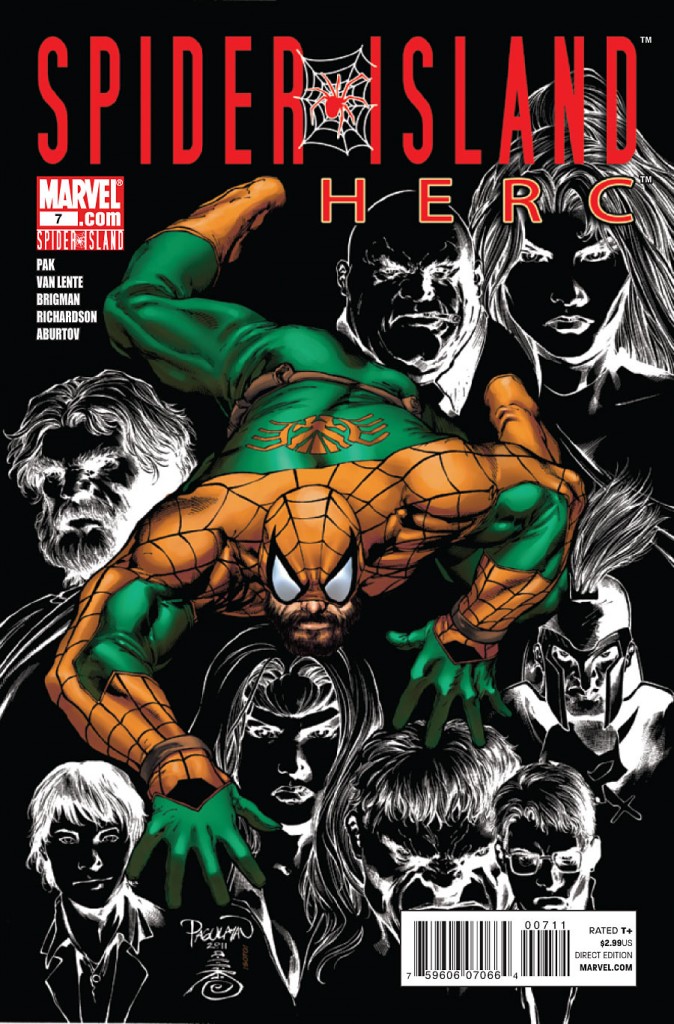 There’s a moment towards the end of Herc #7, far and away the most random inclusion in the Spider Island storyline, when the issue works for me far more than it had any right to..

The demi-god Hercules who, like many others throughout New York City, has been recently blessed with Spider-Man powers, can’t shake a certain feeling. No, it’s not his spidey senses. Instead, he cries out “with great power comes great … angst?”

When I initially saw that Marvel had chosen to tie its Herc series in with the Spider Island arc – a series that’s slated for cancellation after issue #10 – I didn’t know what to expect. In all honesty, I didn’t know a thing about the character, and I couldn’t envision a scenario where I’d be picking up this comic book if it didn’t have the Spider Island logo across the front. But I was curious and after the aforementioned dialogue, I was pleased with my decision.

A storytelling element that’s been oddly missing since Spider Island began is a more cerebral look into what it actually means to be Spider-Man. We’ve seen reckless New Yorkers inherit these superpowers and then promptly use them to cause chaos, and we’ve seen other established heroes get these powers but stay more concerned with their own missions and journeys. But Hercules seems to be the first character to step back and say, “whoa – what is this I’m feeling?”

Because if we learned one thing after reading about Peter Parker/Spider-Man for nearly 50 years is that things are rarely ever happy and sunshiney for the web-slinger. While Spider-Man has chosen to use his great powers in a responsible way, the responsible choice is rarely popular and often comes with great sacrifice. Peter has seemingly accepted this idea at this point. But a character with more noble intentions who has just received these powers is likely going to struggle understanding the dynamics of it all.

Of course, the line is also just a wink and nod to Spider-Man fans, many of which I’m assuming are like me, were probably not long-time Herc readers in the first place. If you’re going to draw in non-fans to your comic book, you’re best bet is to give them something to cheer about, and maybe I’m just one of those gullible readers who is ruining the Herc series for its actual fans by applauding this tie-in.  But I love being in on the joke. Having Herc assuage his angst with some beer, is just icing on the cake.

And the thing that will ultimately make the execs at Marvel happy is I’m now going to give a new series a chance for the remainder of its run. Not a bad result for just slapping the “Spider Island” logo on the front cover and giving the titular character some Spider-Man powers. Scouring the internet, it seems as if a lot of readers are bummed by the fact that the Herc series has been one prolonged crossover after another, but if the writing staff is going to come up with something that delivers for Spider-Man fans, I’m ultimately not going to be feel too guilty about enjoying it.