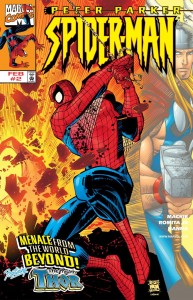 I’ve started a bit of a trend over the past year whenever a new Marvel movie is released where I post thematic content on Chasing Amazing related to Spider-Man and his relationship to the film’s titular character. Perhaps it’s just a desperate attempt for me to be a part of the pop culture Zeitgeist (not to mention an opportune way to troll for page views), but these movie-themed posts have generally been well received and have given me an opportunity to discover or rediscover former Spider-Man storylines and examine them anew using my ever-increasing powers of age and experience.

But I’ve inadvertently backed myself into a corner for today’s post. Based on established precedent, the worldwide release of Thor 2 in theaters today dictates that Chasing Amazing should talk about the Spider-Man/Thor dynamic while reliving some classic moments between the two characters, just as I did with Iron Man and Wolverine earlier this year. The problem is, there just aren’t a heckuva lot classic Spider-Man/Thor stories to talk about, nor have they shared many unique characters moments like what I’ve previously written about with Peter Parker/Tony Stark and Spider-Man/Wolverine. In fact, probably the best story I could have written about involving Spider-Man and Thor was the Chris Claremont/John Byrne Marvel Team-Up #69-70 two-parter, which I’ve already used as part of my Avengers/X-Men 50th anniversary content in September. 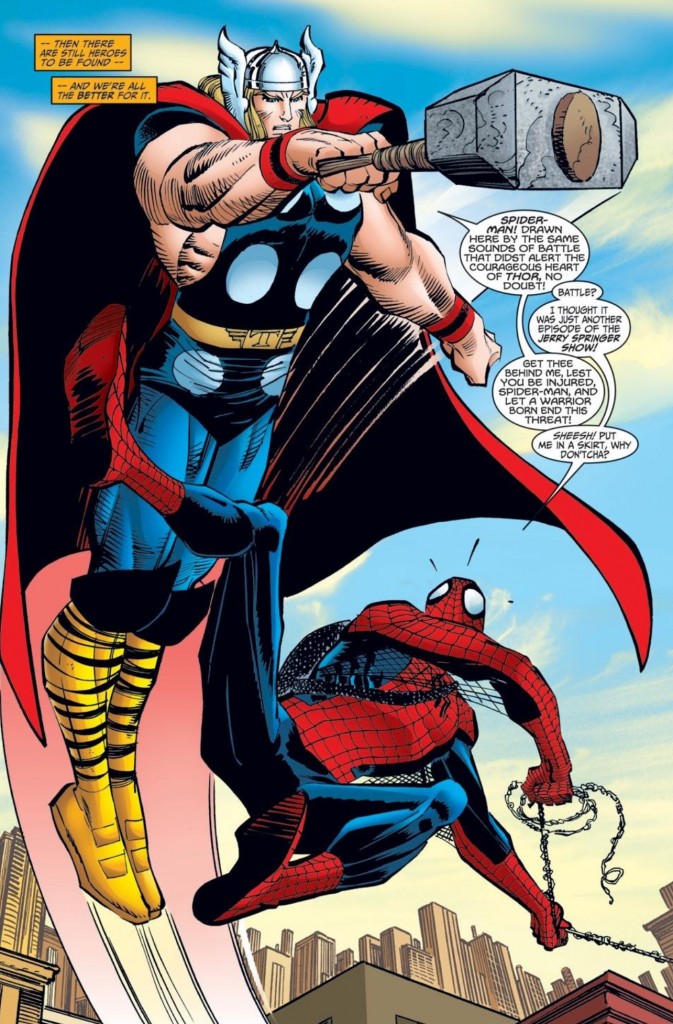 Still, I’m determined to make this theme work, if for no other reason that I’ll have a plethora of stories to pick out in time for Captain America: The Winter Solider next year (my Guardians of the Galaxy post next summer will probably present an even greater challenge than this one). And since I’m a make lemonade out of lemons kind of a guy, perhaps I can waste a little bit of virtual ink talking about why Spider-Man and Thor as a tandem just don’t make for compelling stories.

For me personally, I think the main reason why I’m having such a hard time connecting the two characters in a meaningful way is because they are such polar opposite archetypes on the spectrum of superheroes. In Spider-Man, you have a dorky, introverted teenager as Peter Parker who randomly acquires superpowers and is then obligated to be a hero after an act of selfishness leads to the death of his Uncle. For Thor, his original alter ego, Donald Blake, may be quiet and shy, especially around his love interest Jane Foster, but once he magically transforms into the mighty thunder god himself, he embodies otherworldly powers and an undeniable charisma and charm. Thor’s only true weakness comes when he’s separated from his hammer Mjorlnir. Otherwise, he’s an unstoppable being who can control thunder and lighting and make the ladies swoon without breaking a sweat. 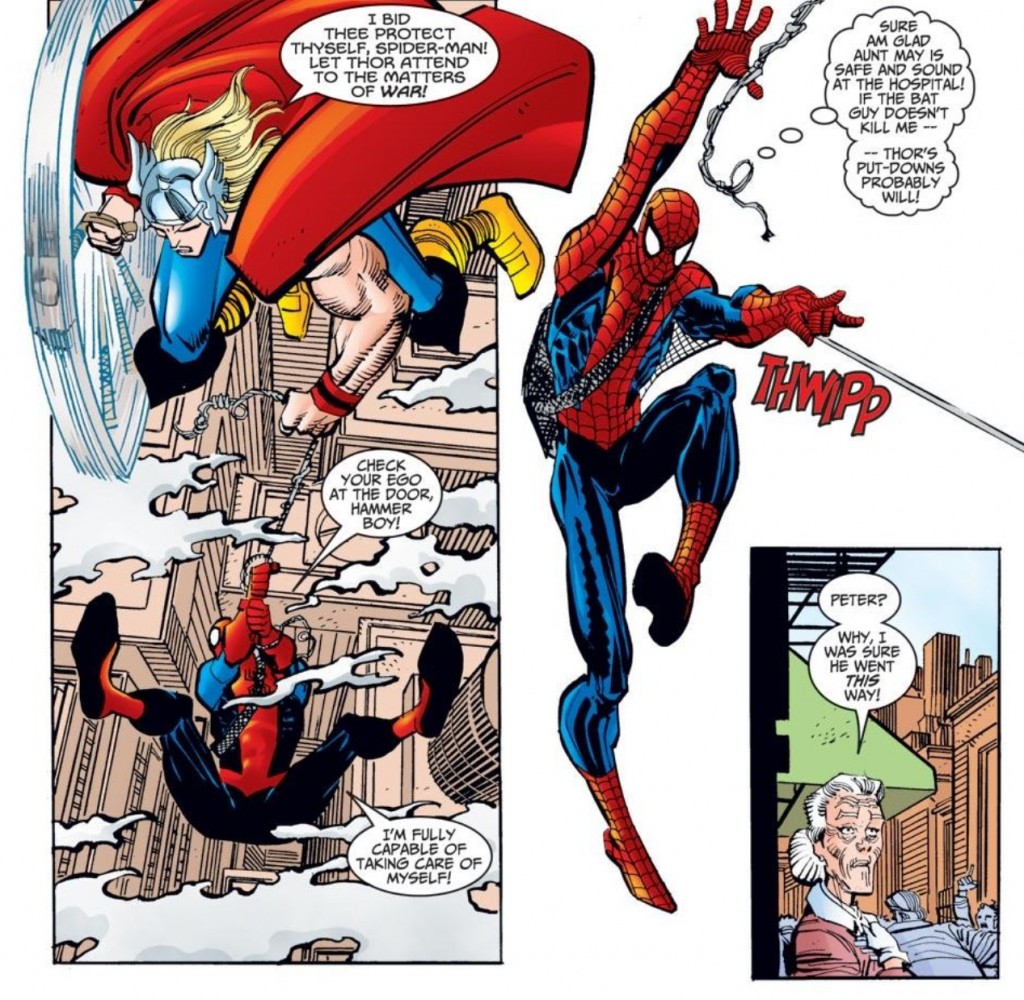 To break it down more simply, Spider-Man is the superhero the “typical” comic book reader can relate to, while Thor is the hero readers wish they could become. That’s not a knock on either, as I truly believe if someone were to make a Mount Rushmore of Silver Age Marvel icons, both Spidey and Thor should both be etched in stone (alongside Captain American and the Hulk). But that doesn’t mean I need to see the two of them in the same comic book, unless it’s a larger team series like the Avengers.

Spider-Man and Thor don’t even have that affable “odd couple” quality when they’re together. Generally, even in the team-up stories that I’ve liked (such as the aforementioned Claremont/Byrne arc), Thor is usually taking care of the heavy hitting, like fighting off the Living Pharoah while Spider-Man seems to luck his way into success. 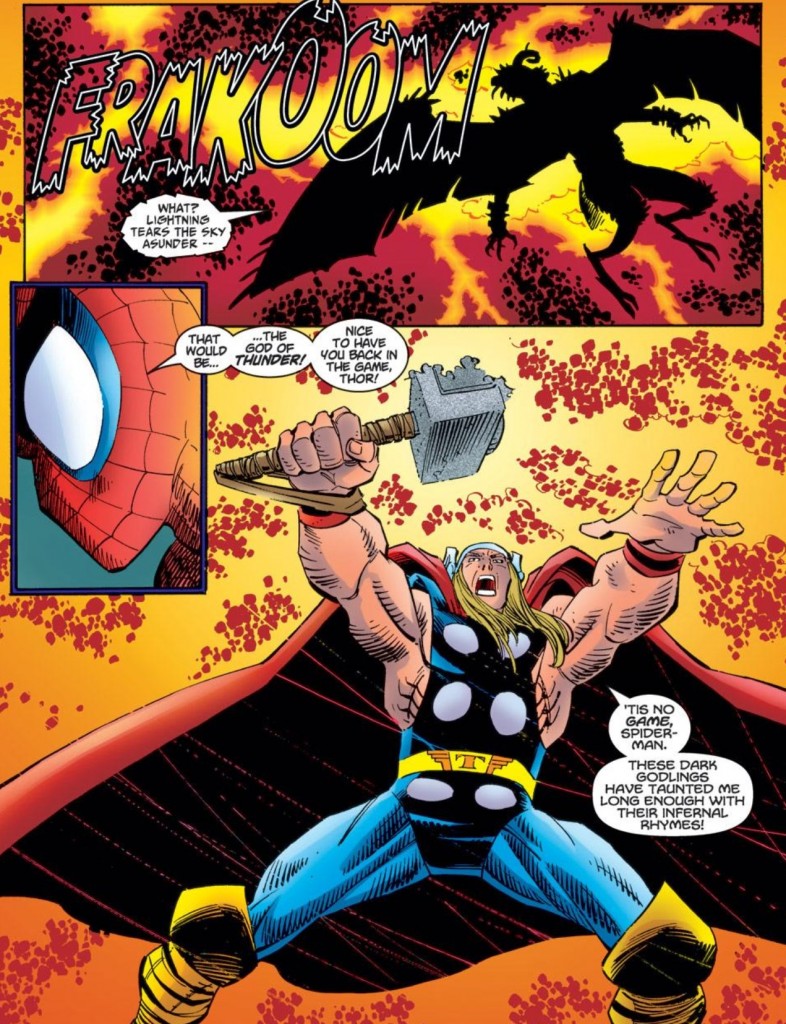 In 1999’s two-part crossover found in Thor #8 (vol. 2) and Peter Parker: Spider-Man #2 (vol. 2), Spidey gets a few moments to shine despite the presence of Thor, but by issue’s end he backs his way into victory over the demonic Tokkots monsters.

In one scene in PPSM #2, Spider-Man and Thor exhibit good teamwork when Spidey uses his webbing to help the Norse God is control his mighty hammer, which has taken on a mind of its own during the arc. Thor eventually loses his hammer, which means he’ll revert to mortal form unless he finds it within a minute. During this time, Spider-Man is ready to fight off one of the Tokkots until a thunder-wielding Thor, hammer back in hand, saves the day.

A few pages later, a Tokkots corners Spider-Man and attempts to strangle the life out of him. Thor is currently indisposed fighting off the other demon monster. As things look incredibly bleak for Spidey, his pager goes off (1999, how I’ve missed you) and in a deus ex machina moment, the frequency from the pager drives the monster over the edge and Spider-Man is able to finish the job. While this outcome feels truer to the character than Thor swooping in and grabbing a free falling Spidey like he was a damsel in distress (a la Marvel Team-Up #70), it’s still a little frustrating for me to see my favorite superhero survive merely by some expertly-timed dumb luck. 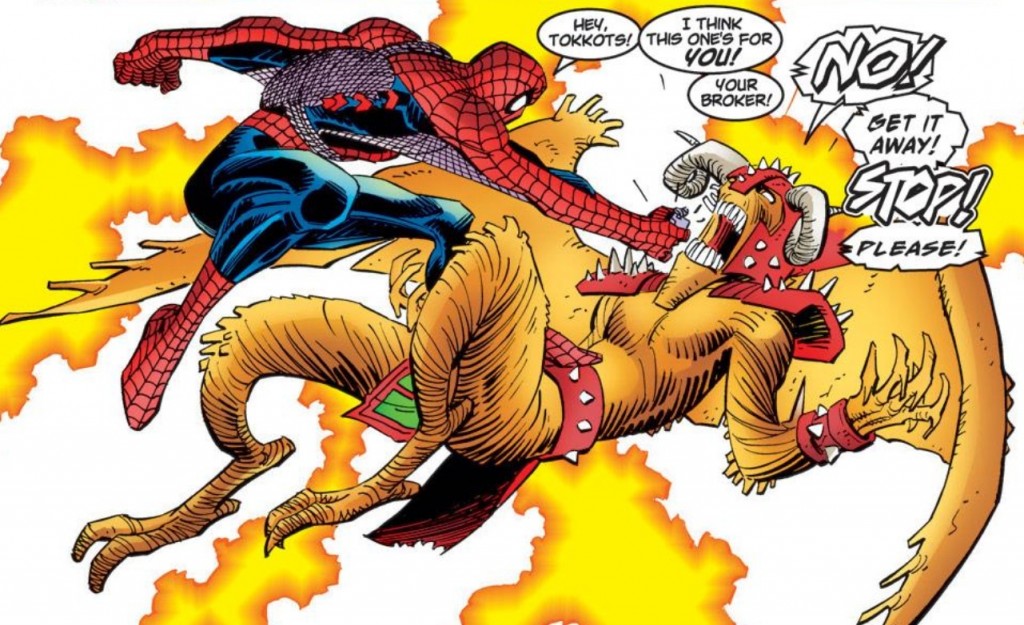 As I mentioned in my post earlier this week about the “Cosmic Spider-Man” storyline from the early 90s, perhaps my overall affection for Spider-Man makes me particularly defensive when he is portrayed as less on-the-level with other heroes in the Marvel universe. The fact that Thor is literally a God, means whenever he and Spider-Man are in the same room, Spidey’s cache is automatically downgraded. The 1999 storyline is a perfect demonstration of this phenomenon. When the odds are stacked against Thor, he still manages to grab his hammer and bring a hellstorm of might and fury to the opposition. When Spider-Man looks like he’s about to go down for the count, his hide is saved by an antiquated communications device. 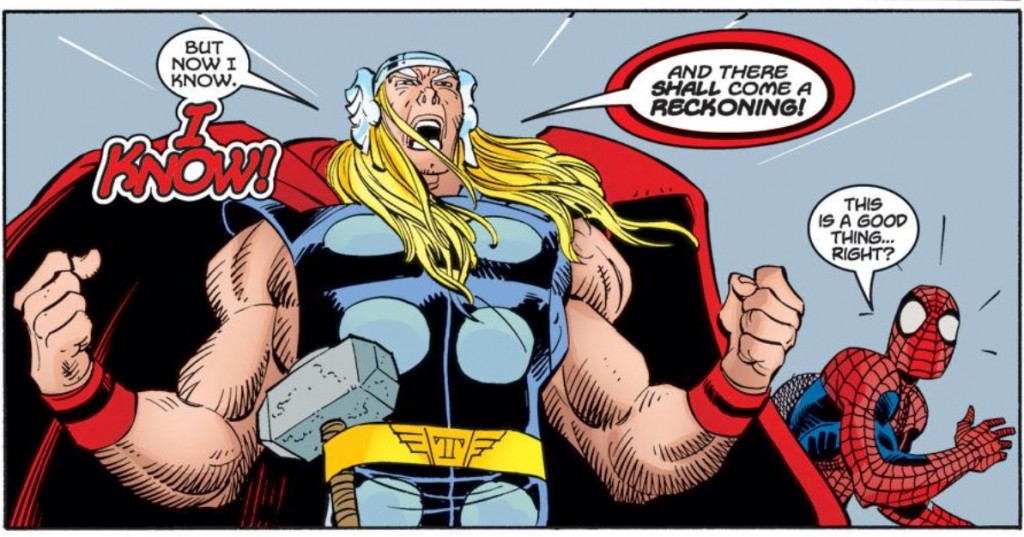 Ultimately, the Thor/Spider-Man dynamic is so non-existent, I honestly can’t say what I would even want to see from a creative team if the two of them were to be teamed-up again in the near future. The Avenging Spider-Man story from earlier this year was a decent enough read, but it featured the wrinkle of Otto Octavius as Spider-Man rather than Peter. As a result, the story focused more on Otto studying Thor and determining what it means to be a hero, rather than offer any kind of insight into the broader Thor/Spider-Man relationship. It’s also a harder story to incorporate into a post like this, since it’s an apples to oranges analogy when it comes to Peter Parker’s Spider-Man compared to Doc Ock’s Spider-Man.

So, now that I’ve officially put you all out of the mood to see Thor 2 this weekend, let me just add that I still think Thor is a great hero, but clearly not a guy who can stroll into a Spidey comic and enhance the story or the character in any way. But hey, at least I got my obligatory blog post out of this whole thing, so I can now start planning ahead for some Captain America content next year!