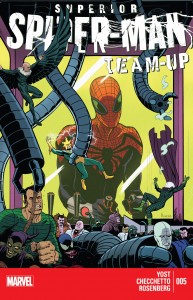 Superior Spider-Man Team-Up #5 marks the payoff of a Chris Yost-penned subplot that has been slowly simmering in the pages of Avenging Spider-Man and Team-Up for the past 10 months. While the trigger-pulling of the “Superior Six” storyline has seemingly brought a bit of focus that has been sorely lacking from the title since its launch in July, I can’t say with any certainty that this was a comic book I enjoyed reading.

It’s nothing against the execution of the writing, or Marco Checchetto’s artwork (Paolo Rivera’s cover of Spider Ock operating the “crane game” to pick up an assortment of villains was especially clever and inspired). But this is one of those issues that demonstrates how anti-hero stories run the risk of disengaging some readers, especially when they don’t give the consumer any likeable or relatable characters to latch on to.

What Team-Up #5 offers up is an uncomfortable and warped tale of Otto Octavius – thinking and sounding more and more like Doctor Octopus rather than any version of Spider-Man – exerting total control and dominance over a group of hapless colleagues in the form of his former Sinister Six teammates. It’s wish fulfillment on steroids, and while the comic ends with Spider Ock basically failing at this exercise, Otto’s fall doesn’t land with the same satisfying thud of Schadenfreude as it does in Superior Spider-Man #19. 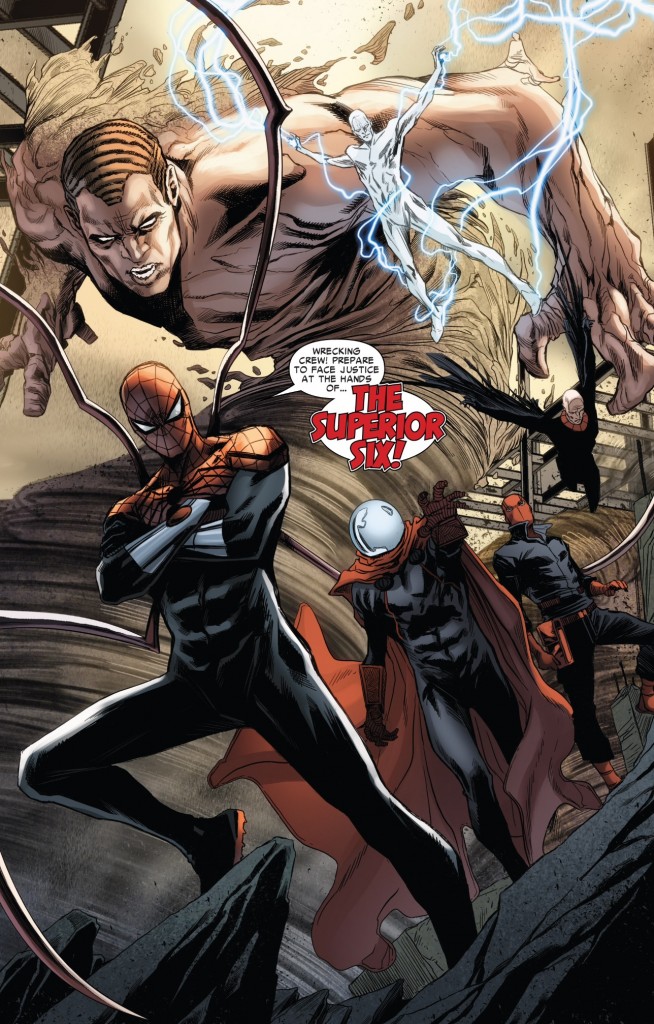 In a moment that sums up my entire attitude towards this comic, Sandman tells the Superior Spider-Man, “he’s worse than that we ever were. He’s turned into some kinda monster.” While controlling the Sinister Six against their collective wills, Spider Ock talks about hamming it up for the media and the crowd observing his battle with the Wrecking Crew because a true hero would never be in cahoots with a bunch of nefarious villains like Electro, Chameleon and Mysterio, unless they were on the path to reformation, but I’m still quite conflicted reading it.

Who am I rooting for in this comic? In one corner, we have Spider Ock, who is just ego run amok, and then we have the Superior Six, who elicit a little bit of sympathy for being controlled against their will by Otto, but are still a known group of murderers and madmen. And if Otto’s experiment with the Superior Six fails, that means the villainous Wrecking Crew, who are trying to steal something from Allan Chemical/Alechmax, may emerge victorious.

As fans of shows like Breaking Bad and The Sopranos should note, the best way to get your audience behind a leading character that is unilaterally unlikeable, is to provide ample justification for their actions. In an apples to apples comparison, the Punisher is a sociopath, but he’s driven to insanity because his family was murdered by the mob. Wolverine is the Marvel anti-hero of all anti-heroes, but his twisted sense of morality is fueled by a tortured past that still haunts him.

What is it about the Superior Spider-Man that makes me want to overlook his flaws and cheer for him against my bitter will and judgment (as I did with Walter White in the Breaking Bad finale)? When Spider Ock behaves badly – which he seems more apt to do in a book that Yost writes rather than Dan Slott – he evolves into one of the least interesting characters in the comic. In truth, the only times I find myself “cheering” for Otto is when he does the right thing, or when his flameout is so spectacular that it opens the door of a more worthy hero emerging from the mind rubble and taking back his role as Spider-Man. 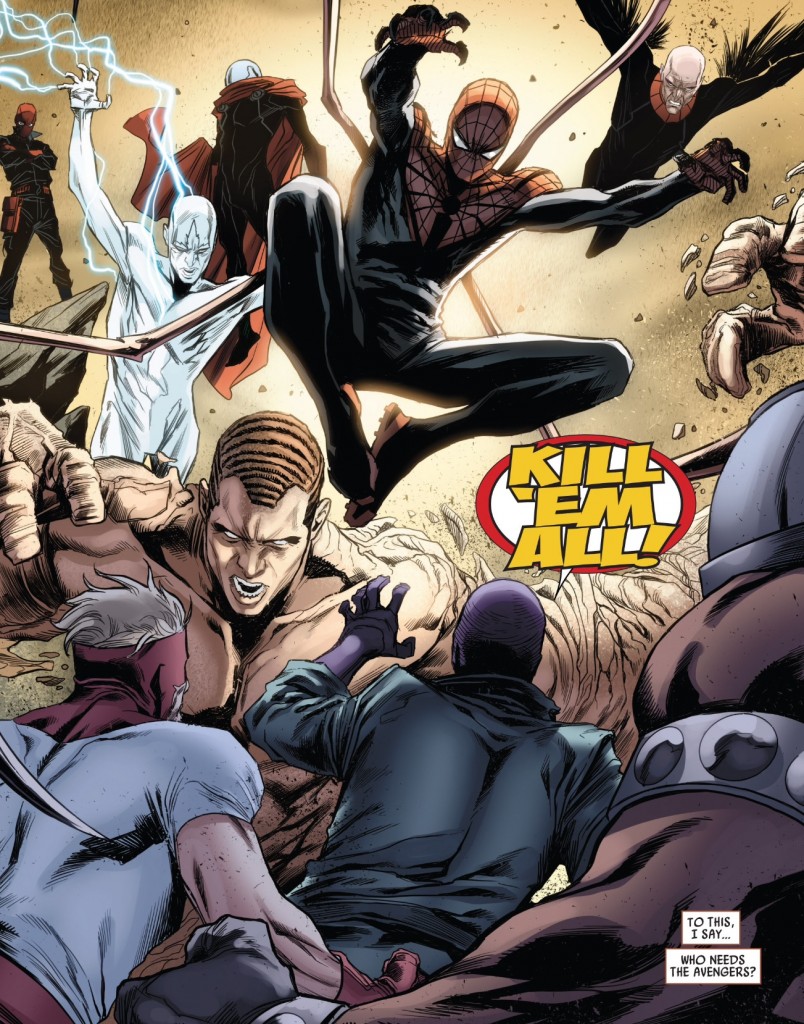 Clearly, Spider Ock’s writers are well past the point of wanting to redeem him, but if the central thesis of this status quo is Otto Octavius attempting (and failing) to prove his superiority as a superhero, I still don’t understand how employing the Sinister Six is an effective means to an end for the character. When this status quo kicked off in January, Marvel’s editorial team talked about how after years of Spider-Man being viewed as a “hero” by readers and a “menace” by the residents of the fictional world he inhabits, this concept would be flipped on its ear in Superior. Perhaps I’m being dense, but I’m still struggling to see how Spider-Man teaming with a known group of villains who had held the world hostage only a few months earlier in “Ends of the Earth,” does anything beyond exposing Spider Ock as the fraud that he is – to readers and the fictitious “public” alike.

There’s, of course, more to this story to be told in future issues of Team-Up and I realize it’s incredibly difficult for a creative team to resolve all these dangling concerns at the very beginning of an arc (that would also just be poor form). But at the same time, one issue in, I don’t feel like I’ve been given any reason to be emotionally invested in this story. So if Spider Ock fails to corral the Superior Six, then what? These villains go back out on the street and cause mayhem? Otto kills them or they kill him? The Wrecking Crew, led by the Lightmaster,  become kings of New York? 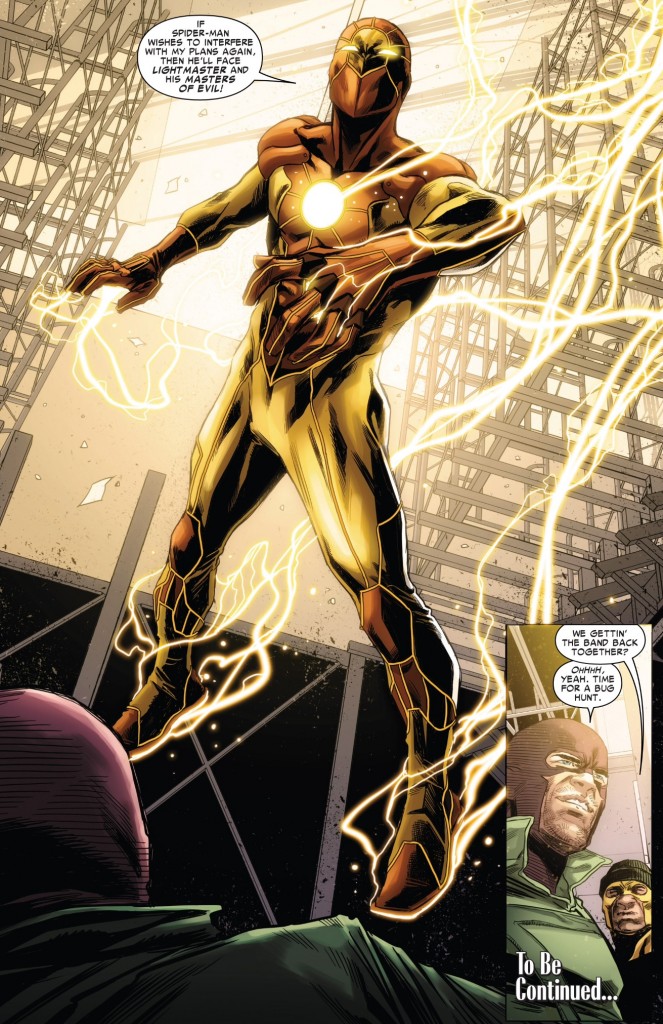 It’s all about Paul Jenkin’s “blueberry pie” analogy: readers came become emotionally fraught over the state of a baked good if the story is framed the right way, and the characters remain compelling. All Yost and co. have proved with Team-Up #5 is that after nearly a year of teasers, they’re now officially moving into the next stage of their story. Whether or not I should care one lick about any of this seems like immaterial.