So I’m back to this dance. It was inevitable in a month where I talk about Spider-Man and Avengers/X-Men crossovers that I would spill just a little bit more virtual ink on the topic of Spider-Man being an Avenger. For all you newbies out there, I’ve previously tackled the topic here and here (and I will/have already re-posted these articles throughout September). Now I’m going to look this issue straight in the eye again as I stroll down memory lane and spotlight the 1983’s Avengers #236-237. 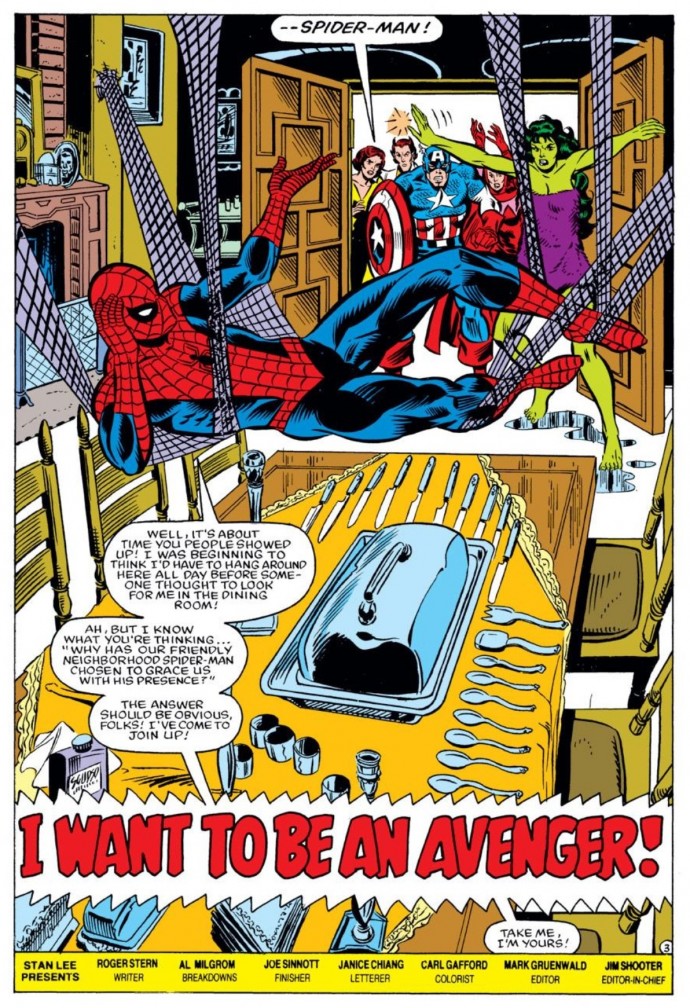 When I profiled the New Avengers “Breakout” arc a few months ago, I broke one of the cardinal sins of blogger-dom and got into it with a confrontational commenter who thought I was being “ignorant” to the idea that Spider-Man shouldn’t be an Avenger. After I insisted that I preferred Spider-Man the “loner,” as he often refers to himself despite my understanding that he starred in his own series called Marvel Team-Up, and seeking admission to the Fantastic Four in the first issue of his very own series, the commenter came back with at least a dozen instances when Spidey was an asset to other heroes/teams throughout the Marvel Universe. And while this commenter was 100 percent right in his assertion that these instances demonstrated what I think we all already know on Chasing Amazing – Spider-Man is the best-est superhero out there – it doesn’t change my mind about Spider-Man being on the Avengers.

In this two-parter, which was scripted by Roger Stern, both one of the greatest Spider-Man AND Avengers writers of all-time, Spidey shows up at Avengers Mansion looking for a job on the team. Captain America and co. tell him not to get ahead of himself, and the best they can offer him at the moment is a “trainee” position. Dissatisfied with the offer, Spider-Man stows away under the Avengers’ Quinjet and helps the team battle the mysteriously laughable Lava Men and then later some established villains like Electro and Rhino. Throughout the two issues, Spider-Man keeps getting scolded by various members of the team for acting out of turn, or for his noted sense of humor/immaturity. Still, the Avengers are impressed enough to offer him … a trainee position. Despite being back at the beginning again, Spidey is ready to accept until he fails to get U.S. government clearance to begin training. And thus that ends another round of the “Spider-Man should be an Avenger” experiment. 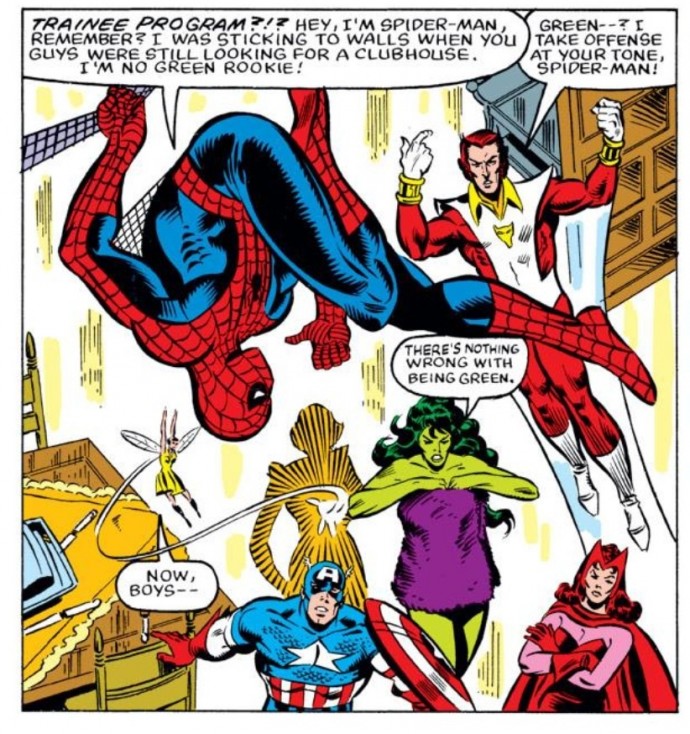 So what’s the big deal, right? It was a harmless two-parter (which was used to celebrate the 20th anniversary of the Avengers) and Stern does his usual standup job with the script, and Al Milgrom delivers well enough with the pencils (nothing groundbreaking, but visually appealing stuff). I’m sure some of you are thinking that I should just get over this and stop venting.

But here’s the problem with all these Spider-Man/Avengers stories – especially those that predate his eventual enrollment on the team during the launch of New Avengers: Spider-Man always seems to be regarded as an inadequate/unworthy addition to these superteams. As a huge fan of Spidey, that’s just a tough pill for me to swallow. Did Joss Wheedon need to audition Robert Downey Jr. to reprise his role as Tony Stark/Iron Man before The Avengers movie? I sure as heck hope he didn’t because Downey was awesome in the two Iron Man movies and it would have been an insult to make him “work” for that gig. Wheedon and co. were probably/should have been honored that he wanted to continue on with the role in this big team-based movie. I would have to imagine that prior to seeing The Avengers, everyone pretty much knew what to expect from Downey, and he didn’t disappoint.

Why am I talking so much about Downey? Because in the same vein, why should someone with the credentials of Spider-Man have to audition to be an Avenger – in training no less?! This guy has been taking on the likes of Green Goblin, Doctor Doom, the Red Skull and Doctor Octopus for years and you’re telling me he needs to kiss the rings of heroes on the level of She Hulk and Captain Marvel II in order to be graciously invited to train with the team alongside of Starfox, an alien who’s calling card is that he’s Thanos’ brother?

Granted, I know it’s meant to be absurd – Spidey says as much at the end and everybody’s tongue is firmly in cheek – but this is a comic book storyline where Starfox is more qualified to be an Avenger in Spider-Man. Let that marinate for a few minutes and get back to me. 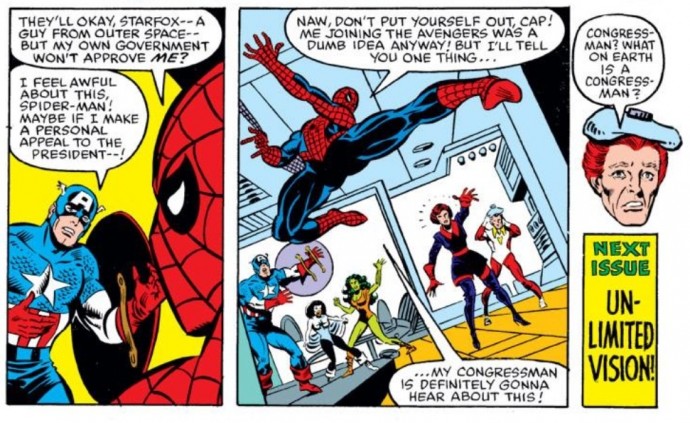 But even if I am willing to overlook the indignity of Spider-Man being equated to Starfox, Avengers #236-237 also demonstrates another pet peeve of mine when it comes to Spidey being on the Avengers. In his own comic book series, Spider-Man is funny and quick-witted and exhibits his fair share of bad luck (aka, the Parker luck), but once he crosses over to an Avengers comic, Spidey sometimes resembles that kid in your class who’s trying too damn hard to get laughs/impress people and instead embarrasses himself. Whether it’s “going commando” jokes in New Avengers, or sarcastically quipping about the Lava Men much to the consternation of Captain America in Avengers #226, I just feel so awkward for Spidey in these comics, which is painful for me to sit through as his fan. 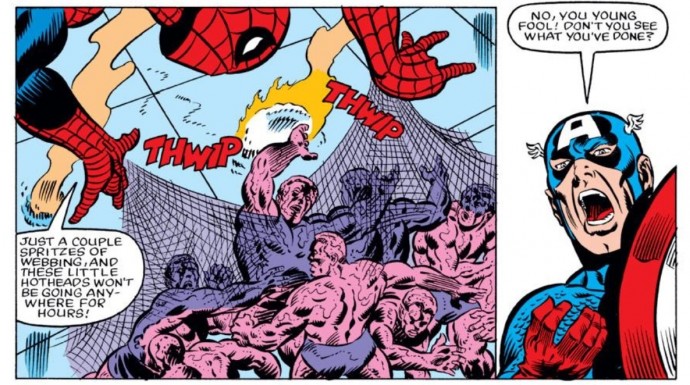 Again, this is not a criticism of Stern. If anything, this is how the character has been consistently portrayed going back to that fateful Amazing Spider-Man Annual #3 crossover back in the day. But just because this is how Spider-Man naturally acts around all of these superhero “big shots” doesn’t mean I have to sit there as a fan and be okay with it. And maybe that’s just what my cantankerous attitude is all about. You can justify the merits of Spidey being an Avenger, cite examples of when he teamed up with Hawkeye or She Hulk or whoever and bailed them out, until you’re blue in the face. I just don’t like Spider-Man on the Avengers. Period.