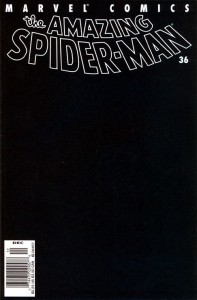 The morning of Sept. 11, 2001, I was working my campus job in a computer lab. My shift started at 8:30.  The morning shift was typically very quiet, so when I wasn’t reading and/or catching up on my homework, I was surfing the Internet to kill time.

It was a Tuesday morning towards the beginning of the semester, so I was in time-killing mode. So, when the Internet stopped running before 9 a.m., I was frustrated. I figured the wizards who were running our university’s IT department were hogging bandwidth again. Somebody was downloading a movie or playing Unreal Tournament and here I was, unable to check out some random web site. It seemed unfair.

I had an hour left in my shift and I was hoping someone would come into the lab with a question about PowerPoint or Word so I would have something to do. A colleague of mine walked in instead and said he had just heard on his radio that a plane had hit one of the World Trade Center towers.

I don’t remember my initial reaction, but it wasn’t concern. For some reason, when I heard the word airplane, I was thinking some small biplane and that some idiot who didn’t know how to fly killed himself, damaging one of the towers. And that explained the Internet outage. Our university was about 30 minutes outside of New York City, so something at the towers must have been affecting our connection. Nowhere in my brain was I thinking it was a commercial airliner that had crashed into one of the towers. And obviously, the idea that this was part of an intricate terrorist plot was part of some kind of absurdist dyostopian fantasy. Things like that just didn’t happen. 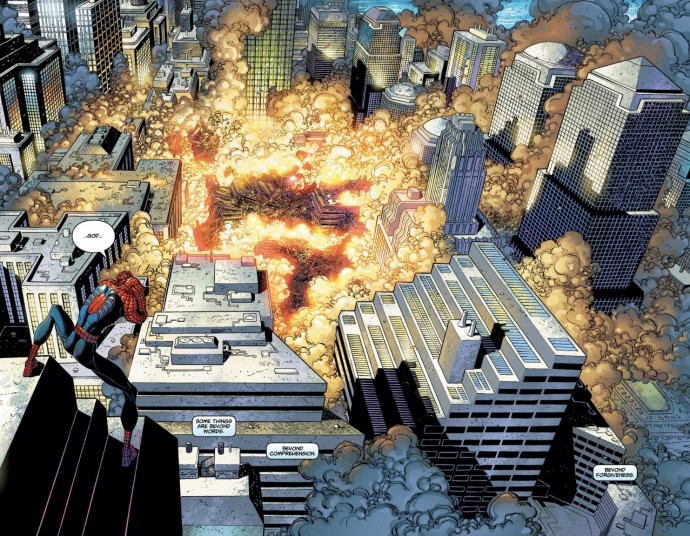 The next hour or so unfolded in a weird kind of space-time continuum where information was rapidly being fired at me, but events were unfolding in slow motion. A faculty member burst into the computer lab and said the second tower was hit. I went back to my dorm to put on the television. Did I even finish my shift? By the time the television was on, the first tower had collapsed. My phone rang. My girlfriend, now my wife, who had just moved to Queens, NY, was letting me know she was okay. She had tried calling me earlier, but she couldn’t get her cell phone to work because hundreds of thousands of other New Yorkers were doing the same exact thing. I walked back towards the TV and saw images of the tower falling. “Why do they keep showing the replay?” I asked. But it wasn’t a replay.

When the second tower collapsed, and reports trickled in of a crash at the Pentagon and of another crash in rural Pennsylvania, I was convinced … of something. No, the world wasn’t going to end that day, and I wasn’t going to die, but this wasn’t reality anymore. This was some kind of disaster movie, and when something this catastrophic happens in a disaster movie, cities are destroyed or entire populations are wiped out. So I did what any illogical person would do. I called my parents, and asked them to drive to campus (which was about a half hour away) and pick me up. I wanted to go home. 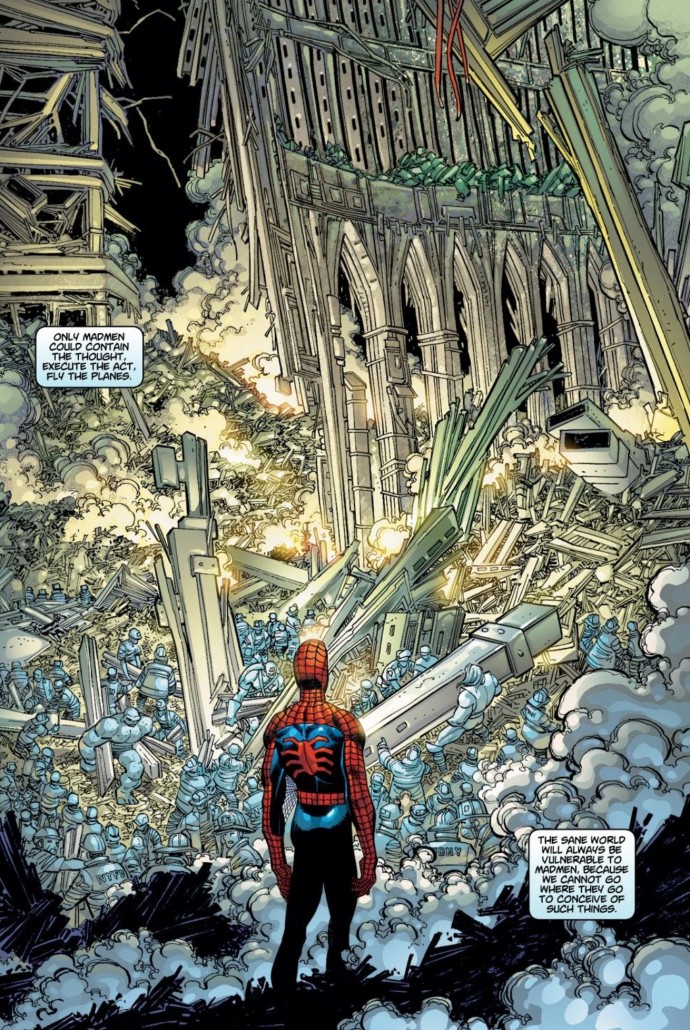 I still feel shame just thinking about my initial reaction that day. About a month earlier, I had just turned 20 and there I was, in the face of crisis, regressing to a five-year-old mentally and emotionally. All I wanted was home. What was I going to do at home?

Throughout college, I was driven to become a professional reporter at a daily newspaper.  The dream wasn’t necessarily the New York Times, but I wanted to be an influential part of the social framework. I wanted to be a primary source. When I was home on Sept. 11, my parent’s phone rang and it was my journalism mentor from school. “Mark what are you doing home?” she asked. I was insulted. How could she be so insensitive? And then, like a swift smack to the head, I had come out of my emotional coma. I was an aspiring journalist, and the biggest story of our lifetimes was unfolding before me – I had a job to do. I got a ride back to campus after my mom came home from work and I started reporting, speaking with students, faculty, or whoever else was willing to talk to me. Whoever was going to tell me their story about Sept. 11. My own story was irrelevant. 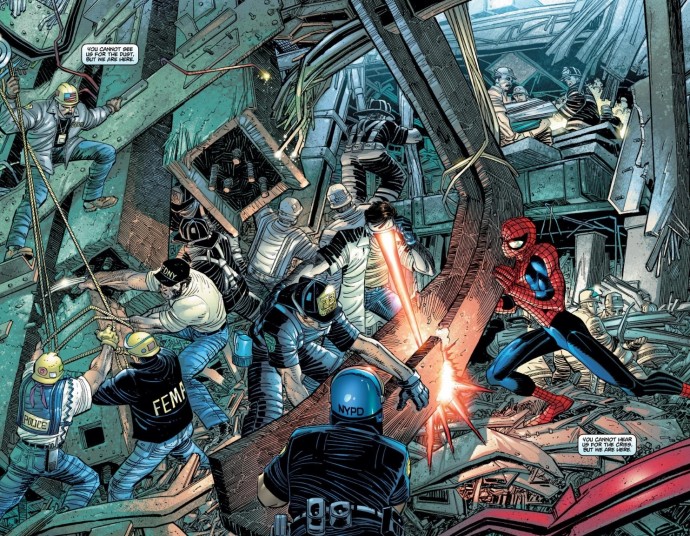 Amazing Spider-Man #36 (volume 2) is also known as the Sept. 11 issue. This comic book was Marvel’s tale of Sept. 11. With its solemn black cover, the opening panel was Spider-Man overlooking the destruction of Ground Zero. Unlike Superman who patrolled Metropolis, or Batman, who protected Gotham City, Spider-Man fought crime in New York City, a real place, and a place that happened to constantly loom large over the Long Island suburb where I grew up. It’s also a city I proudly call home today. Chalk it up as another connection I have to Spider-Man.

I wasn’t collecting comics in 2001. And when I got back into collecting a few years later, and I was going over all of the issues I had missed during my hiatus, I was a bit unsettled to discover the content of ASM #36. While the world had changed dramatically and the New York City skyline had been violently wounded, shouldn’t a fictionalized version of Manhattan in a comic book story about a superhero still be a place of escapism? Or am I just being selfish?

Adding more to my negative emotions about ASM #36 was the fact that it had become a highly sought-after and collectible issue in the series. It’s probably the most expensive issue in the second series of Amazing Spider-Man and near mint with a pristine cover can sell for well over $100. Yet the issue seemed to generate more controversy with comic book fans because of the sensitized portrayal of the Marvel universe. The fact that supervillains like Doctor Doom were down at Ground Zero and showing emotion towards the loss of innocent human life was laughable to some.  Was that Doctor Doom shedding tears in one panel?

As a coping mechanism after Sept. 11, I decided to start looking at the date almost analytically. While it was a date in history I had experienced first-hand, I would look back on it like it was Pearl Harbor, or the JFK assassination. I talked about its historic implications. I did my senior thesis from college about the symbolic representation of news coverage after Sept. 11. Anything to sterilize the date.

Because of this lack of emotion, I was finally able to buy ASM #36 a few years ago at a comic book show in New Jersey. I had my rules – I wasn’t going to get caught up in some kind of crazy bidding war on eBay for this issue, because it seemed disrespectful. And because of the collectability of this issue, many online retailers only sold the issue in an auction format. So when I saw a copy of #36 at the show and realized the seller was just looking to unload as many comics as he could, I picked it up, along with a few other books and used the lump sum approach to knock a few dollars off the final amount I paid. Sterile and emotionless. 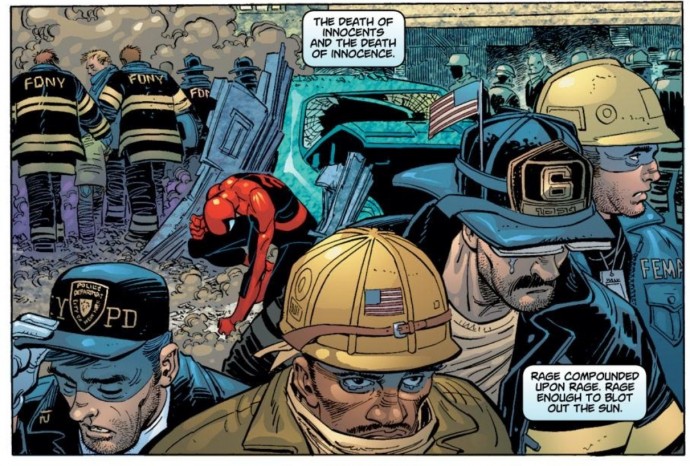 When I first kicked off this blog for myself a few months ago, I hadn’t determined if I would ever have an entry for ASM #36. So much of my collection is about passion and drive, and here was an issue I needed to keep at an arm’s length so I didn’t feel emotionally-dirty. Then the dramatic events happened Sunday evening with the killing of Osama Bin Laden, and suddenly, I felt the urge to write about it.

I will never fully wrap my head around the events of Sept. 11, and given that I was fortunate enough not to lose anyone I loved that day, I prefer to give deference to the people who were profoundly affected by the actions of Bin Laden. How does my story of a computer lab and a comic book compare? But simultaneously, Bin Laden’s death gives me an odd sense of resolution that I didn’t think I would experience in my lifetime. The decade of my 20s, a time of great self-discovery, was dominated by the post-Sept. 11 universe. Now, on the eve of my 30s, the decade where I become more firmly entrenched in adult-hood, the man who may be most responsible for world we now live in is gone. 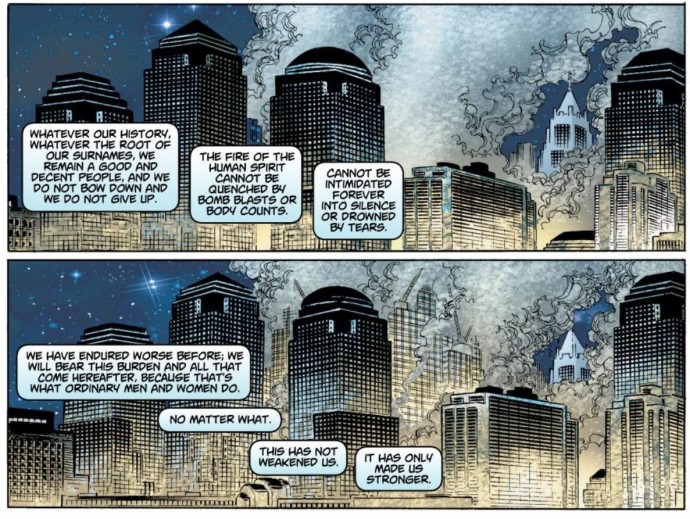 Prior to May 1, 2011, I looked at the cover of ASM #36 and saw all of the things that made me the cynical, hardened individual I am today – loss, sadness, lost opportunity, exploitation, etc. While that will never completely disappear, Monday morning I looked at the cover of #36 and realized that no matter how dire the circumstances, the stages of our life almost always feature a set of bookends. That every story has an ending, no matter how emotionally distant I have become as it has marched forward.