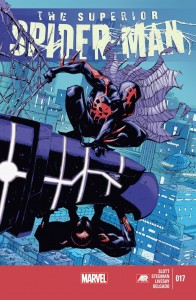 I was not one of those Spider-Man fans clamoring for the return of Miguel O’Hara, aka Spider-Man 2099, when Amazing/Superior Spider-Man writer Dan Slott first baited people about the character’s modern-era resurrection with an “accidental” tweet to artist Ryan Stegman last year. Despite not reading the series in nearly 20 years, Spider-Man 2099 remained tucked away in my mental box of “things from the 90s that shouldn’t be mentioned again,” not so much because it was a bad comic, but because I just had no recollection of being all that excited by it. I would imagine for any creator, the worst kind of reaction you can get from someone is no reaction.

But even with my aloofness to the idea, Superior Spider-Man #17 hit the marketplace last week with as much hype as a Spider-Man comic where Peter Parker is killed/erased from memory. So, ready or not, I had no choice but to pay attention and get excited for this issue.

Fortunately, after reading Superior #17 (and re-reading the original origin arc from Peter David’s Spider-Man 2099), my first reaction is that I would love to see Slott add an ongoing or mini-series about Miguel to his already overstuffed plate. Slott has such a natural feel for Miguel and the 2099 universe that I think he would be capable of creating some great material over the span of five or more issues. Yes, you heard that right. I’ve gone from not caring to demanding MORE Spider-Man 2099 after just one comic book. 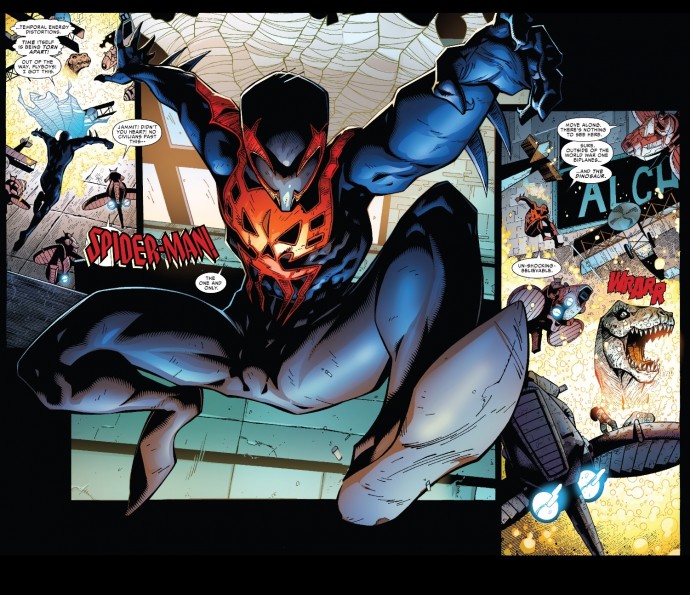 Superior #17 demonstrates what Slott does best as a Spider-Man comic book writer: an appreciation for detail and continuity; snappy dialogue and funny situations; and enough misdirection and sleight of hand to keep my interest level high for the next story. In many ways, Superior #17 feels like two comics in one with its ample back story (or an introduction for unfamiliar readers) of Miguel and his world, along with plenty of scenes involving Spider Ock and his supporting cast. Slott then ties these two universes together in a way that’s both logical from a story progression standpoint, and satisfying as a reader expecting a payoff.

One of my biggest reservations about this storyline prior to reading was how Slott was going to effectively bring Miguel back in a way where the two Spider-men needed to interact and confront each other? The Age of Ultron mini-series introduced the idea that the Marvel timeline was being ripped to shreds by the amount of time traveling taking place throughout the comic book universe, but we all know what I,  and the majority of comic book readers thought about Age of Ultron. The Spider-Man 2099 storyline could have easily backfired in Slott’s face if he relied too heavily on the exposition found in a comic book that was basically one big commercial for a bunch of other comics books. 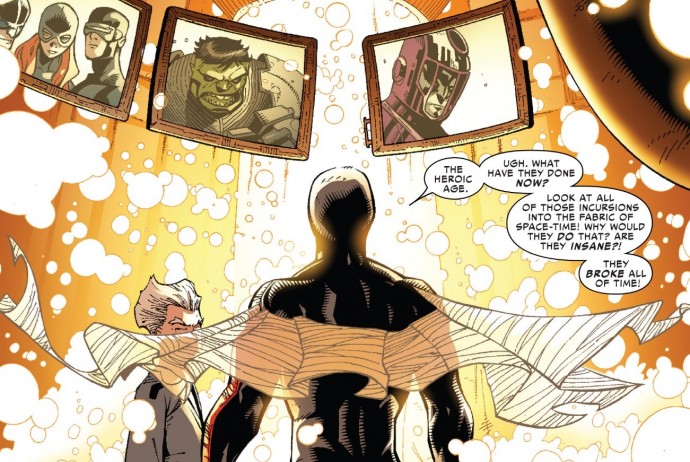 But we don’t get Age of Ultron redux here (thankfully). Instead, Slott’s premise is very reasonable: because of all the timeline damage, Tyler Stone, a wealthy businessman (and secretly Miguel’s father) is disappearing from existence. Miguel needs to find a way to get back to the “Heroic Age” and stop him. Meanwhile, in 2013, Horizon Labs is under siege that’s to the shenanigans of Tiberius Stone (Tyler’s grandfather as Superior Spider-Talk rightly predicted). Spider Ock needs to go after Tyler to save Horizon and its head, Max Modell, who he has high regard for (despite still finding himself “superior”). Miguel and Otto cross paths at the end with conflicting interests, so let’s have a battle and settle this conflict. Done and done. 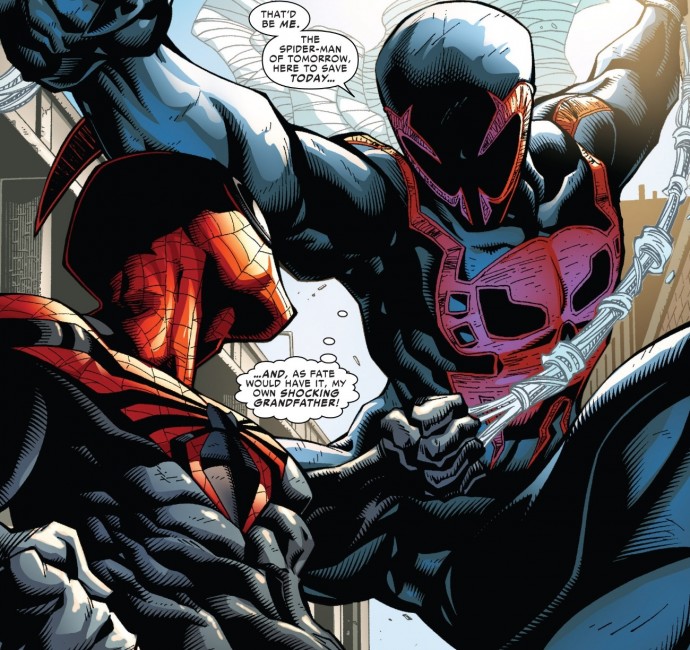 All of this information is introduced by Slott, and yet he still finds ways to homage David’s original work – using a lot of the original series’ vernacular like “what the shock?” – and also slips in a couple of genuinely funny scenes, like Otto playing softball at the Horizon Labs company picnic and being an insufferable prick about the whole thing. As someone who played on his share of company softball teams, I can certainly relate to the handful of people I’ve met who take the “sport” a bit too seriously. 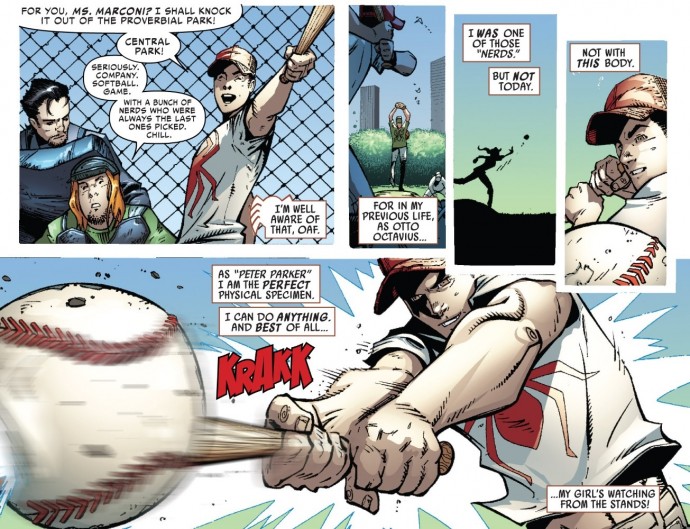 And if all these moving pieces were not enough to satiate readers, Slott still keeps the wheels churning on this Green Goblin mystery, while introducing a new subplot involving longtime supporting cast member Liz Allan and her potentially hostile takeover of Horizon Labs (though is Slott just planting a seed of a merger between her and Modell which leads to the creation of Alchemax?).

It’s great to see a character like Liz again, though all of her scenes left me wondering if Slott is trying to play some more tricks on his readers. On more than one occasion, it’s been suggested (mostly by my podcast-mate Dan Gvozden) that Liz and Harry Osborn’s son Normie is secretly operating as the new Green Goblin. Some of the clues include the lingering pause on Normie’s vacated hospital bed in ASM #697, and the fact that the new Goblin made a comment about being someone’s “daddy” during one his appearances in Superior. Others have countered this claim by citing how Normie is still portrayed as a kid/young teenager in the comic book universe and the Green Goblin appears to be a fully grown figure.

As far as I’m concerned, the critics of the Normie theory are probably right, but I just can’t shake it, and Superior #17 does nothing to help me get over this idea. There are TWO instances in this issue where Spider Ock’s Spidey Sense is tingling and the character’s assumption is that the danger is coming from Tiberius Stone, but Normie is also in the room and Otto himself admits that his danger sense is not specific enough for his liking. 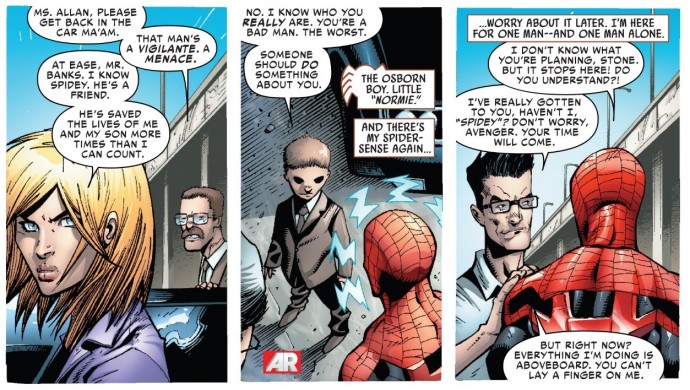 Then there’s the exchange between Normie and Spider Ock at the very end where the child explicitly says he “knows” Spidey and knows he’s a bad man. Just a refresher, when the Green Goblin returned at the end of Superior Spider-Man #4, his pitch to the young followers of the Vulture was that he “knows” Spider-Man and all of his tricks.

I still think Slott wouldn’t be keeping the Goblin’s identity a secret so long if he was going to just reveal him as someone un-extraordinary (like Ned Leeds or Roderick Kingsley). The son of Harry Osborn is as shocking as it gets. How Slott logistically explains it (is he using lifts in the Goblin suit? Prosthetics? It’s comic books, do we really need this to be THAT scientifically correct?) is anybody’s guess.

So over the course of this write-up, I’ve reversed course on Spider-Man 2099 while also sat her for the past 30 minutes (writing time) torturing myself about Normie Osborn. And people wonder why I think Slott is ultimately the best thing to happen to the world of Spider-Man comics since the first part of J. Michael Straczynski’s run in 2001?