I’m 32 years-old, been reading/collecting comic books since I was 7 years-old, and am obsessive enough about my hobby to launch my very own blog and co-host a comic book podcast, but this past weekend’s ComiCONN event in Trumbull, CT, marked the very first time I ever attended an official “comic book convention.”

I know that’s a shameful thing to admit, but I like to think I’ve had my reasons. I’ve long thought that the cons were just events designed to get people to pay a decent chunk of money to have the opportunity to shop (and spend more money) on comic books, toys, etc. and/or dress up as their favorite superhero. Given how much money I still need to shell out for my remaining issues of Amazing Spider-Man, why would I want to drop money on a ticket on the off-chance I might be able to find one of my missing issues? And considering Halloween is my least favorite holiday of the year, dress up is definitely not my thing.

Of course, I’ve learned my lesson and now understand that the cons provide comic book fans/collectors/readers etc. with a lot more than retail opportunities and cosplay. Sure, those two things are an integral part to the festivities, but so is the opportunity to talk one-on-one with people who made or are making some of my favorite comic books, and just being around people who share in my enthusiasm and passion for the comic book medium. 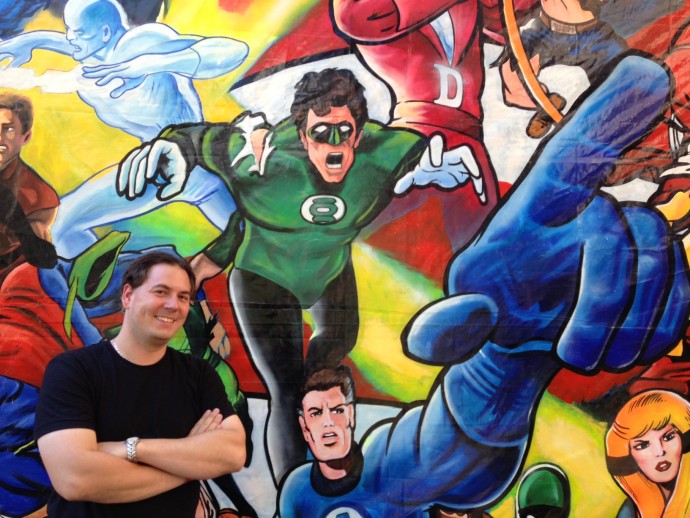 A really awesome collage of comic book/cartoon characters greeted visitors as they walked in.

Over the next week, Dan and I will be releasing some quality interviews with the aforementioned creators as part of our Superior Spider-Talk podcast. All of these guys very graciously lent us their time and let us pick their brains about topics they’ve either a) haven’t thought about in years or b) have been asked so many times about they’re probably sick of talking about it. The ComiCONN setting definitely worked to our advantage. While the convention site was packed with very enthusiastic fans, Dan and I weren’t competing with San Diego or New York Comic Con-sized crowds, which provided us with enough short windows to squeeze in these interviews. Regardless, despite the fact that you’ll probably hear us thank these five dozens of times in the imminent future, let this blog entry exist as the first of many “thanks you’s.”

As someone who prides himself for his writing, meeting J.M. DeMatteis was a real treat and honor. He’s unquestionably one of the friendliest individuals I’ve ever met, and he’s responsible for writing some of my all-time favorite Spider-Man stories – “Kraven’s Last Hunt,” “The Death of Harry Osborn,” and “The Gift” (aka death of Aunt May). Given his attention to characterization and overall fearlessness to tackle heavy subject matter, I totally anticipated JMD to be the epitome of thoughtfulness in our interview, and he didn’t disappoint. He absolutely came across as someone who has the utmost respect and pride in the comic book medium. Be sure to check our podcast when it drops to hear JMD talk about earlier iterations of “Kraven’s Last Hunt,” his thoughts on Aunt May being resurrected a few years after he killed her, and his take on whether or not he has any more Spider-Man stories to tell. 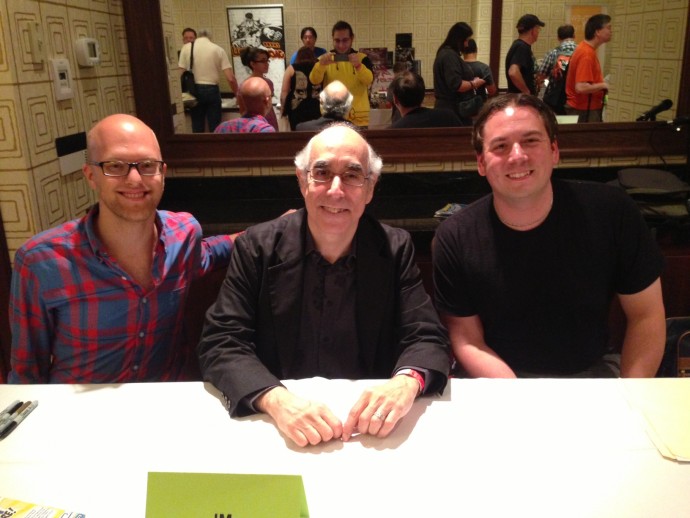 From l to r: Dan, J.M. DeMatteis and myself

My summer spent revisiting the “Original Hobgoblin Saga,” on Chasing Amazing made me very excited to meet DeFalco, Fingeroth and Salicrup who all played pivotal roles on Amazing Spider-Man during that era. Given all the hats DeFalco has worn at Marvel over the years,  he was a fascinating (and hilarious) interview that tackled such subjects as his plans for the Hobgoblin’s identity (here’s a hint, it wasn’t Ned Leeds or Roderick Kingsley), the initial panic in Marvel about Spidey’s black costume, the “Clone Saga” and the cult favorite Spider-Girl title he launched about Peter and Mary Jane’s long-lost/deceased daughter.

Fingeroth and Salicrup, who were sitting next to each other (and about ten feet from DeFalco), both indulged my desire to hear about how “the sausage was made” on all the Spider-Man titles during the 80s and early 90s (the years I first started to read and then “collect” Spider-Man comics). Both were incredibly knowledgeable and informative about their time spent with Spider-Man. Fingeroth talked about ASM transitioning from Roger Stern/John Romita Jr. to DeFalco/Ron Frenz, his time on Web of And Deadly Foes/Sinister Foes of Spider-Man, and the rise of the “gimmick” era of comic books at Marvel. By the time I got to Salicrup, he told me my constant questions about the Hobgoblin were on par with Kevin Costner’s character in the film JFK, but he humored me anyway and talked about one of the first ASM issue he edited (ASM #289, when the Hobgoblin is revealed to be Ned Leeds), as well as why he pushed for one of my all-time favorite artists Todd McFarlane to get assigned to ASM and then eventually his own (adjective-less) Spidey title.

Before sitting down, Salicrup quipped that we wouldn’t “have enough tape” for our interview, and he wasn’t fooling, as I probably could have spent hours picking his brain about his time at Marvel. The DeFalco/Fingeroth/Salicrup trifecta was probably the highlight for me in terms of unearthing the back story of the comics from my childhood during the fact-finding section of my ComiCONN experience. 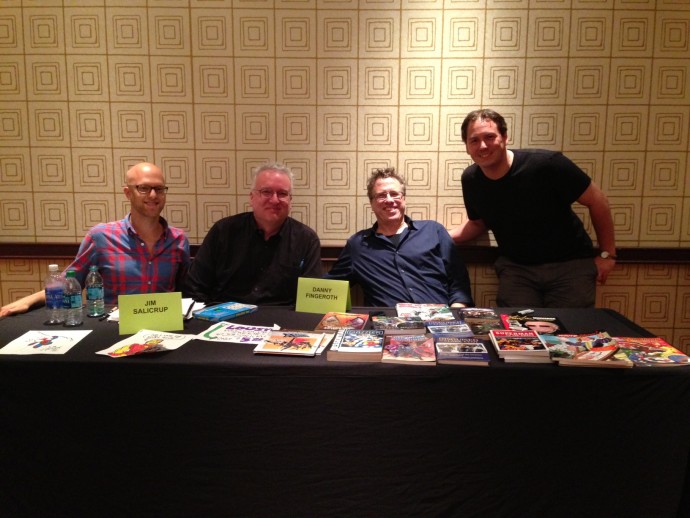 From l to r: Dan, Jim Salicrup, Danny Fingeroth and myself

While I’m a humongous fan of Bagley’s work, my podcast partner Dan is an even bigger one, so I had no problem letting Dan run that interview, while I pretended to know how to monitor audio levels on our laptop (don’t worry, the audio will sound fine regardless). We caught Bags towards the tail end of his night, and while he was surely exhausted, he still spent a good chunk of time with us talking about his time on ASM and Ultimate Spider-Man, the nuance to his work, how much he likes drawing Carnage, and whether or not he’s looking to draw another Spider-Man 616 series in the future (spoiler alert: he’d love to so he could demonstrate his growth as an artist).

It wasn’t “all work and no play” for Dan and I. While I wasn’t looking to make any big-ticket purchases, I could resist diving into the “cheap boxes” for some potential “Gimmick or Good?” issues to cover in the future. I then stumbled on a table that had a bunch of Spider-Man “B” titles for .50 cents a pop. I find a fairly exhaustive run of “Clone Saga” non-ASM issues. After jokingly being asked “how much does the ‘Clone Saga’ weigh?” by comedians Mike Lawrence and Jake Young on the “Nerd of Mouth” podcast I appeared on a few weeks ago, I can safely say that half the saga, was very heavy to carry around all day. 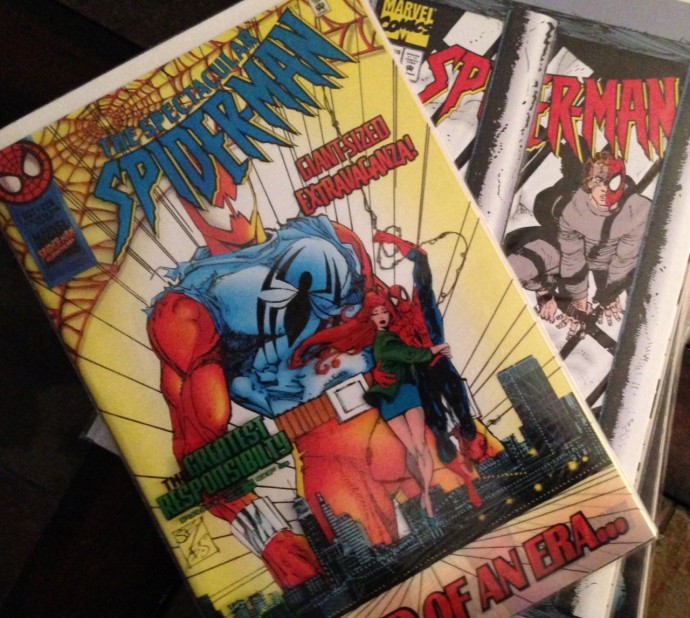 How much does the “Clone Saga” weigh?

So after spending years being a con-phobe, I’ve finally realized the error of my ways, and would love to do something like this again in the near future. I had a great time, and more importantly, I learned a lot about the comic book industry and my favorite character. I’ll update Chasing Amazing with posts as all of the individual podcasts/interviews become available, so make sure you stay tuned to any announcements. Meanwhile, thanks again to Mark, J.M., Danny, Jim and Tom and of course the organizers of ComiCONN for a fantastic event.