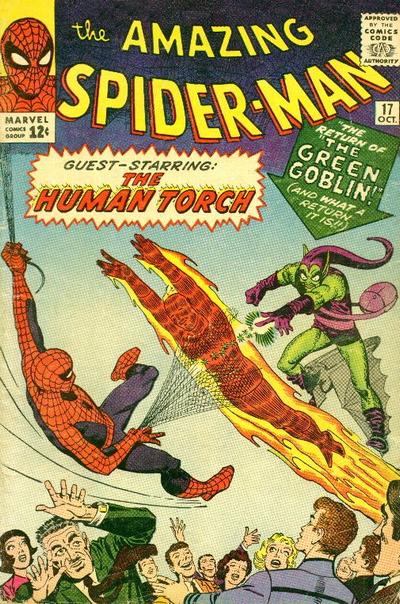 For years, the oldest Spider-Man comic book I owned was my copy of Amazing Spider-Man #25 – a comic I was basically embarrassed to have in my collection because I purchased it as a teenager for all the wrong reasons. As silly as this may sound, it was beyond frustrating for me to open up my short box reserved for ASM issues #1-99 and find that beat up, raggedy copy of ASM #25 sitting at the front of the queue, seemingly mocking me for buying the comic book equivalent of snake oil. I yearned for a chance at redemption and the opportunity to purchase something new and improved to move to the front of the line.

Amazing Spider-Man #17 was my redemption. While certainly not a pristine copy of a classic Silver Age tale of Spider-Man, I also felt like this was a comic book that I had purchased on my own terms, without being blinded by lust, greed or just sheer teenaged stupidity. It was just a good old-fashioned low grade copy of a comic that pre-dated me by more than 15 years.

My actual acquisition of this comic was anonymous enough. As I was slowly working my way backwards through the Bronze Age of Spider-Man to complete my collection, I saw a seller on eBay had a number of auctions going for some low grade Silver Age issues of ASM. There must have been at least 10 comics on the block that were on my “if I can get away with paying XX amount, I HAVE to own this no matter what” list. I placed multiple bids on multiple comics and kept my mouth shut – I knew I wasn’t going to win every single comic book I was chasing here, but if my wife found out I had silently pledged that much money in one sitting, she wouldn’t have cared how things were ultimately resolved.

As is always the case with eBay auctions, things were mostly silent for the first 99 percent of the auction, and then escalated quickly in the final hour or so. At one point, I thought I was going to walk away with a VG- copy of ASM #4 for half of theguide-listed price, but someone else’s deeper pockets prevailed. Despite the reckless number of auctions I had entered into, I had my price limit for each comic I was after, and I wasn’t about to get pulled into the eBay version of a pissing contest.

And it’s not like ASM #17 was some kind of loser’s consolation prize. It marks the second appearance of the Green Goblin, one of Spider-Man’s all-time most nefarious villains, which alone makes it a “must” get for even the non-Spider-Man completist out there. And beyond the collectability of the comic, it also contains a treasure trove of themes and premises that defined the most loveable qualities of the Stan Lee/Steve Ditko era of Spidey. 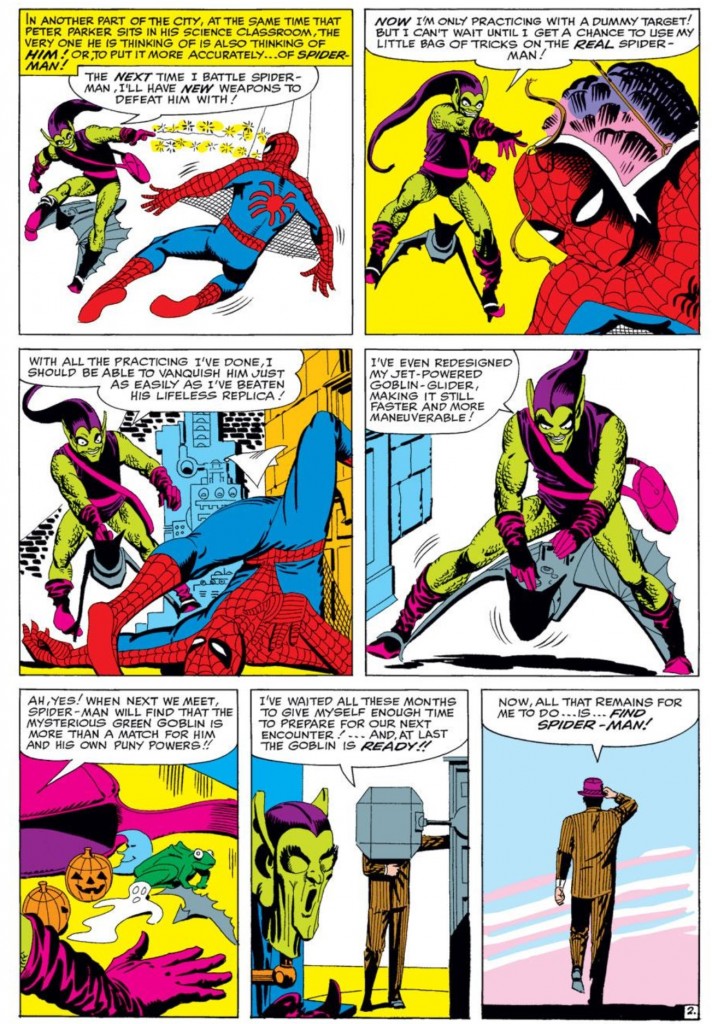 One of my personal favorite ideas that makes its inaugural appearance in ASM #17 is one of the Spider-Man universe’s greatest ironies – the Spider-Man fan club founded by none other than Peter Parker’s most annoying nemesis, Flash Thompson. While comic book historians go back and forth on who inevitably contributed more to the first 38 issues of ASM, Lee or Ditko, I’ve always thought the comic was at its best when it married Lee’s carnival barker salesmanship with Ditko’s general disdain for the un-extraordinary (basing this attitude wholly on the idea that Ditko was a known follower of Ayn Rand and thus, many of her “let the moochers eat cake” pontifications work their way into the early issues of ASM). 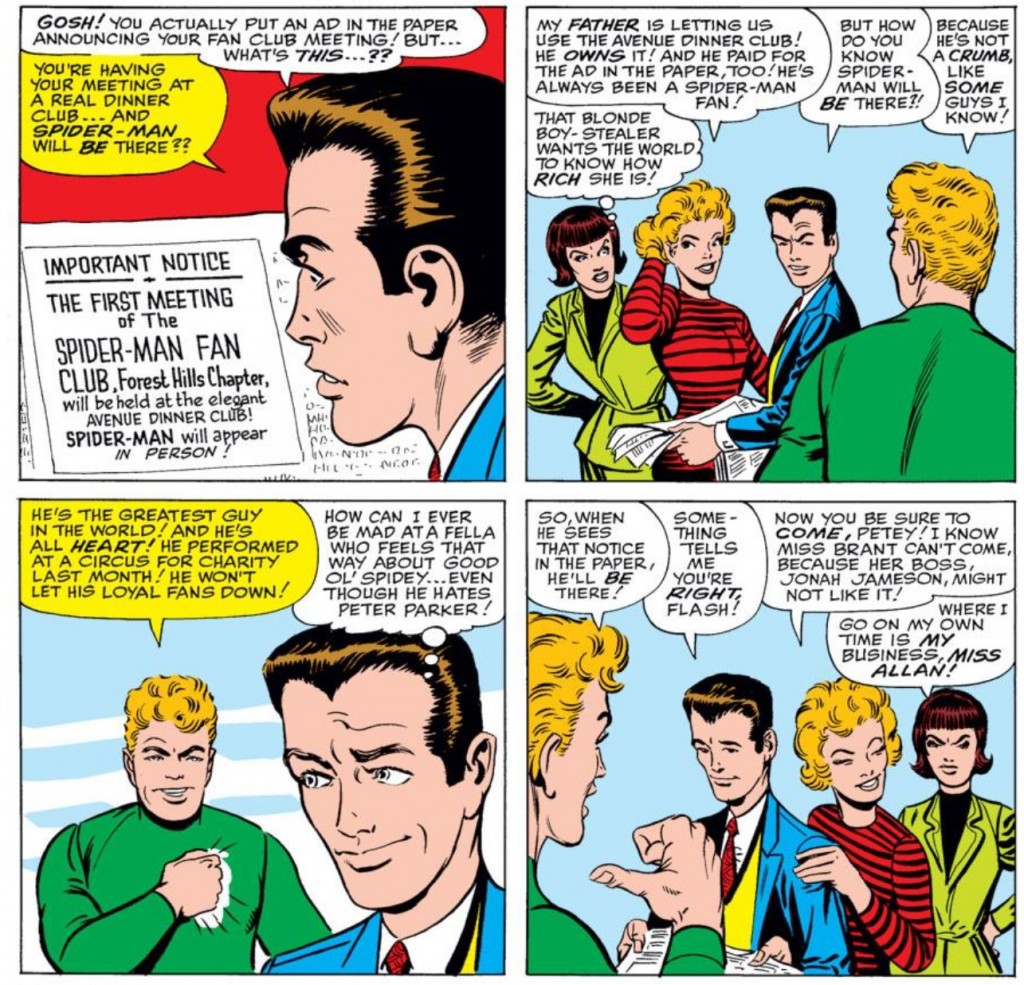 Flash Thompson as head of the Spider-Man fan club is the perfect example of the Lee/Ditko synergy. Only Lee would think up of something as hokey fas a fan club for one of his creations, and only Ditko would have the smugness to have it be run by a guy who’s not bright enough to realize he actually despises the guy under the Spider-Man mask. The fact that Flash is the only guy still defending Spidey after he seemingly “chickened out” on his fight with the Green Goblin, claiming his hero must have had “his reasons,” for leaving the scene of a fight without warning, further embellishes the deliciousness of this premise. Flash doesn’t even want Peter showing up at his shindig because he think he’s a “square,” and yet he’s the only one who is seemingly rational enough to argue that a proven superhero wouldn’t just bail on innocent people without good reason.

ASM #17 also marks another chapter in the long-running Spider-Man/Human Torch feud during the Lee/Ditko run. The petty, adolescent rivalry between Spider-Man and Human Torch is another one of those great Lee/Ditko joint premises at work (I love it so much, I might have to dedicate some of my writing strictly to that topic … hint, hint …). Of course Lee would want to promote some of his other properties as much as possible, and Spidey and Torch made perfect teammates – they were the only two teenagers in the Marvel Universe at that point. And yet it was Ditko and the chip he constantly put on Spidey/Peter’s shoulder that made the relationship dynamic. Rather than just dryly teaming up to save the day, the two guys hated each other. Spider-Man saw Human Torch as the guy who had it all but didn’t deserve it (there’s more Rand for you) while Torch saw Spider-Man as an uptight square. In Lee/Ditko’s world, if Johnny Storm never got superpowers, he’d be just another Flash Thompson picking on Puny Parker. 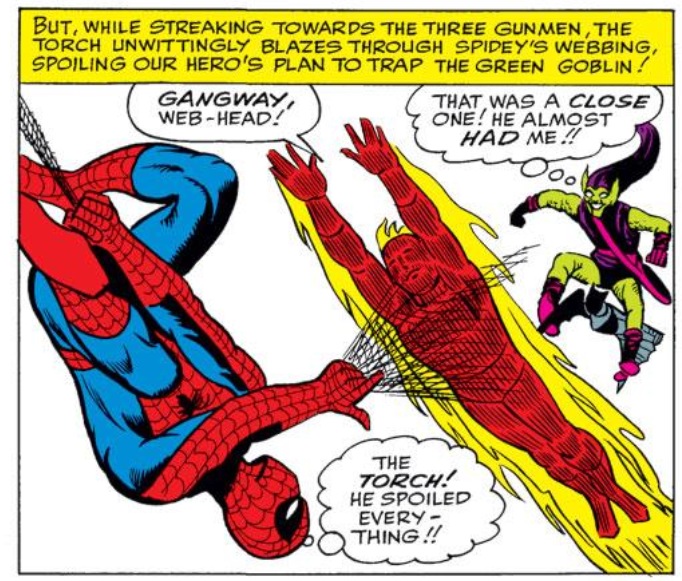 And of course, this issue ends on a note that Ditko/Lee would revisit a few other times to great success during their phenomenal 38-issue run together – the “Parker luck” and how “with great power comes great responsibility” often means Peter has some awfully difficult and inconvenient choices to make. In the case of ASM #17, Spidey’s sudden departure from his fan club meeting when he overhears that his Aunt May had a heart attack, makes him the city’s laughingstock and punching bag. Meanwhile, his professional problems pale in comparison to the well-being of the one family-member he has left after his own hubris and negligence led to the murder of his Uncle Ben.

Ditko’s final panel in this issue remains one my favorite pieces of  his interior artwork. A shirtless, dispirited Spider-Man standing in shadow, ruing the day he ever acquired his powers. While other superheroes at the time seemed to embrace and celebrate their powers, here was one who wished he never even HEARD the name Spider-Man ever again. It’s such a powerful statement about the fragile mindset of this young hero that it still resonates today whenever current Spider-Man comics creative teams revisit this guilt-ridden, reluctant hero. The Lee/Ditko Spider-Man was about as erratic and unpredictable as it could get – and was the opposite of the saintly good Samaritan some fans portray him as today. It’s part of the reason I almost always dismiss the idea that today’s Marvel writers don’t “get” Spider-Man, whatever that even means. There are a lot of layers to this character, going back to the very beginning, giving justification to some of his decisions some fans have deemed “questionable” in recent years. 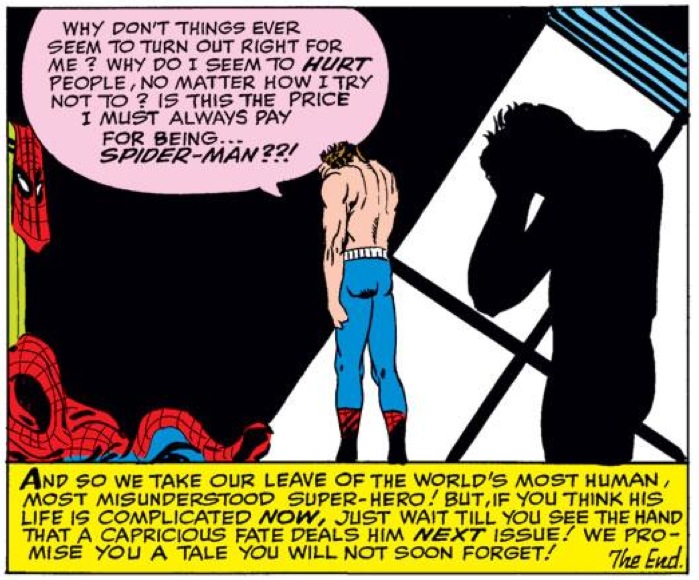 In terms of owning a comic that exhibits the entire “Parker condition” inside one neat and tidy issue, I couldn’t have been happier the day I received my copy of ASM #17 in the mail a few years ago. I had a “new” oldest comic that would fulfill its role nicely for a while until it was coincidentally enough replaced at the front of the queue by ASM #14 – the first appearance of the Green Goblin. But given some of the Parker-inspired guilt that came with me acquiring THAT issue, I still like to hang on to the idea that ASM #17 was my “oldest” comic book I could be proud of for a long while.