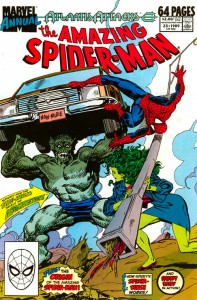 Front seat conversation between my wife and I during long car trips inevitably devolve into something along the lines of me randomly asking, “name your top five (insert just about anything here, i.e. songs, bands, movies, sandwiches, secretaries of state, etc).”

I’ve often wondered if individuals born with the writer’s gene were also born with the list-making gene, because I’ve been obsessed with neatly categorizing everything I like or dislike about the universe into top five and 10 lists for as long as I can remember. And the same can be said for many of the people I’ve shared a workspace with. There’s just something so satisfying about knowing where someone stands on a certain subject, and then comparing your understanding of that person with what you know about yourself. Ultimately, is there anything more revealing about a top “whatever” list? There’s a reason why “High Fidelity” is one of my favorite movies ever (from my perspective, mix tapes and song playlists are analogous with “top” lists).

Amazing Spider-Man Annual #23 is the first annual issue I ever purchased – something I picked up in elementary school right off the spinner rack. Despite the fact that annuals remain a bit of a sore subject for me as a collector, this particular issue has remained significant to me for many reasons: primarily for the comic’s “Top 30 Spider-Man Villains” B-story. 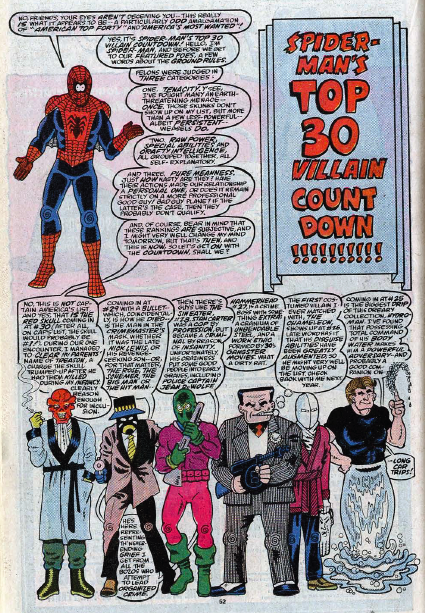 Years before I got caught up with the semantics of whether or not the annual issues were formal entries in my “chase” to collect every issue of Amazing Spider-Man (my current “official” stance on the matter is I intend to own every one, but they are not a part the stated chase my blog documents), I adored my copy of ASM Annual #23 as an introduction to what the annual medium had to offer newer readers. I was still very young when I first purchased this comic and had a limited understanding of Spider-Man’s origins and back story. While I couldn’t tell you about a single detail about the issue’s featured story – a Marvel team-up style confrontation pitting Spidey and She Hulk against the monstrous Abomination (imagine the “eureka” moment when I was watching the Ed Norton Hulk movie a few years ago and I made the connection about the villain) – the B stories were critical in introducing me to various elements of Spider-Man’s classic mythos. There was the short about Spidey’s irreplaceable “Spider Sense” (which might have explained my impassioned defense of the power when it was temporarily stripped away by Dan Slott a few years ago), a quirky mini-story about the Spider-Man/J. Jonah Jameson dynamic and of course that “Top 30” list. 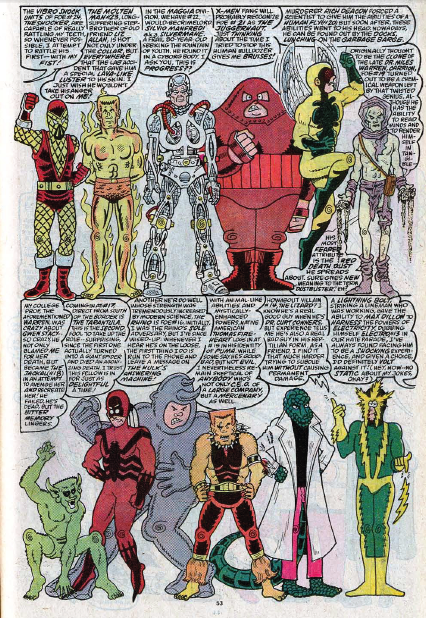 Hindsight and just general timing has clearly made elements of the list very outdated, but I can’t overstate how important this list was to me in understanding one of my favorite aspects of being devoted to superhero comics: the hero’s gallery of rogues. Prior to this list, the characters on the list I was most familiar with were Doc Ock, Green Goblin, Red Skull and Doctor Doom, since all were iconic villains in the Marvel universe that transcended their primary role in Spider-Man comics (especially Red Skull and Doom). Additionally, I knew about Tarantula, since he was featured on the cover of the very first Bronze Age Spidey book I ever owned, ASM #147; Kraven the Hunter, from the late-80s “Kraven’s Last Hunt” storyline; and of course, Venom, since I’ve pretty much declared ASM #300 the most important comic book of my generation. Even at the time, I thought ranking Venom #7 was an incredible oversight by Marvel (Doctor Doom is not a true Spidey villain, and who cares if Kraven buried Spider-Man alive if he was no longer alive to torment him?). Everyone else on this list contributed to the comic book education that I’m still acquiring to this day. There were guys that were definitely foreign to me: Silvermane? Crimemaster? Hammerhead? There were others I had vague ideas about but really didn’t understand their significance to Spidey: Vulture, Scorpion, Electro, Mysterio and Sandman.

I read and re-read this list so many times, its contents essentially became dogmatic to me. Of course Green Goblin was Spider-Man’s most ruthless villain. ASM Annual #23 told me so. It wasn’t until many years had passed that I finally came around on the idea that maybe, just possibly, Doc Ock should get that illustrious #1 ranking (the recent events perpetrated by Otto to set up Superior Spider-Man certainly help his cause tremendously). This list also inspired my long-standing internal debate about whether or not Jonah is an actual “villain” or more of an “antagonist.” When a reader asked me on Twitter some time ago about where Carnage ranks on my list of top Spider-Man villains, the Annual #23 list weight very heavily in my (clearly scientific) decision making. Ultimately, I found it incredibly difficult to rank Carnage above any of the guys in the issue’s top 10 list, regardless of the fact that some of these guys haven’t been front-and-center antagonists for Spidey in some time. This list, for all its flaws, just seems definitive to me.

Meanwhile, for anyone who’s ever been stuck in a bar or on a late-night subway train ride with me and wondered why I’m always asking you to name a certain number of your favorite somethings, please keep in mind that this is just part of my genetic nature. Or perhaps it’s because I read this one comic book so many times as a kid, that it’s made a serious imprint on the way I socialize with other human beings.