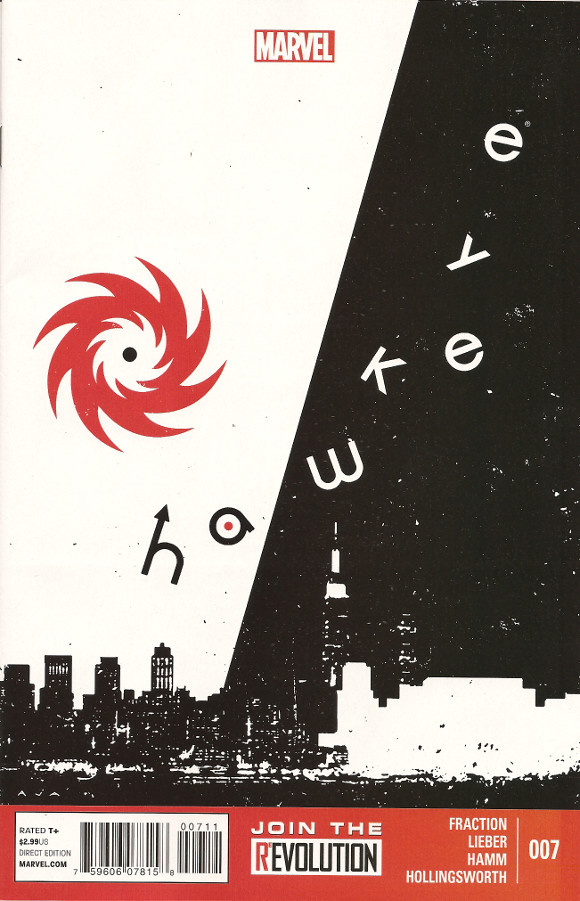 The “tribute” to a national tragedy comic book issue has always come across to me as a very slippery slope for the superhero medium. Of course, I can’t think about one of these “very special” issues without immediately reflecting on Amazing Spider-Man #36 (volume 2), which was written/illustrated by J. Michael Straczynski and John Romita Jr. in the wake of the September 11 terrorist attacks. While emotional and heartfelt, the comic also featured such absurd images as a teary-eyed Doctor Doom and is in many ways emblematic of why it’s often best for a medium that focuses on the over-the-top super powered battle between good and evil to distance itself from comics that focus on real-life issues of death and loss.

So I understand that I was taking a bit of a risk by diving into the much ballyhooed Marvel Now: Hawkeye series with issue #7, which depicts Hawkeye (Clint Barton) and Hawkeye (Kate Bishop) dealing with the impacts and aftermaths of Hurricane/Superstorm Sandy. The bitter taste of ASM #36 was still in my mouth – seriously Marvel, you have to do a comic book about one of the defining tragedies of my lifetime, and do it in a such a way that, all these years later, all I can do is smugly deride it? – but I’ve been hearing such fantastic things about the job writer Matt Fraction has been doing on Hawkeye, that I thought it was worth a shot (plus proceeds were benefitting Red Cross recovery efforts in places like my hometown on Long Island, where the storm dealt a tremendous amount of damage to many families that I’ve known for years). 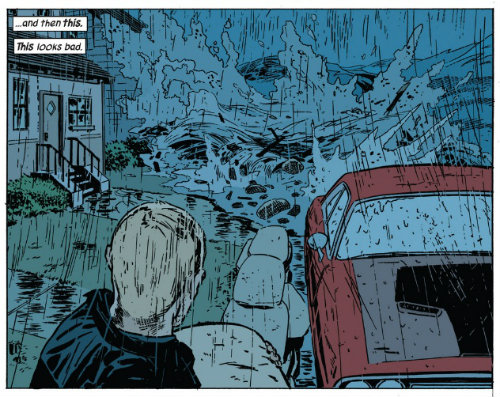 After reading it, I’m glad I took that chance. While I’ve been led to understand that issue #7 is actually one of the weaker entries in Fraction’s early-run, I thought it was a great introduction to the general Hawkeye concept, not to mention a really smart way for Marvel to tackle a real-life tragedy in one of its superhero books.

As to the latter point, part of what makes Hawkeye such a unique read is the fact that the book focuses on a “superhero” who actually has no mutant/radioactive-enhanced super powers to speak of as he’s operating away from his super-powered team, The Avengers. And that’s why using the Hawkeye title as a platform to discuss Sandy in the Marvel Universe is such an intelligent move. What is so especially cringe-worthy about ASM #36 is the heavy handedness of juxtaposing fictitious heroes and villains alongside real-life heroes and villains like New York City policemen and firefighters and Islamic Jihadists like Osama Bin Laden. On the heroic side, placing characters like Spider-Man and the Hulk down at the clean-up and recovery of Ground Zero just came across like pandering. Wouldn’t Hulk have been strong enough just to life up half of the wreckage in an attempt to save anyone buried underneath? Isn’t it well-established that the NYPD views Spider-Man’s masked vigilante act as a threat? In terms of Marvel’s villains, while Doctor Doom and Magneto are certainly sympathetic characters who are provocative enough to get readers to maybe consider their points of view, both have perpetrated, or attempted to perpetrate crimes designed to kill innocent people by the thousands and millions. How can anyone with a straight face put forward the idea that these characters advocate world domination but draw the line at a terrorist attack on American soil?

Hawkeye #7 works in that in avoids these logistically backsliding situations altogether. It also helps that Sandy’s associated death toll was not on par with Sept. 11, though the destruction and rebuilding it has created, in many ways, was far more devastating. But since Clint and Kate are both experts with a bow and arrow, but are absolutely plain and ordinary in every other facet of life, it never comes across as contrived that they would be out there in the teeth of the storm, helping out a neighbor, or trying to get to a wedding in New Jersey while dealing with some petty thugs at a convenience store. Plus between the intricate page plotting and witty dialogue, Hawkeye has an old-school, almost indie comic look, feel and rhythm that lends itself to tap-dancing between real-life and the made-up stuff. It’s more of a light-hearted Art Spiegelman than bombastic Lee/Kirby superheroes.

Hopefully, the commercial and critical success of the issue has now provided Marvel with a template for how to tackle current events in future comics. There’s still something so incredibly jarring about seeing real news or public figures portrayed in the pages of a Spider-Man comic book. This is a world where someone as chemically imbalanced as J. Jonah Jameson can become mayor of the most influential and powerful city in the United States, or where characters are routinely killed off/body snatched, and then returned to form after 6-12 months. The cause and effect of everybody’s actions in this universe is so heightened, it’s hard to accept real world consequences on the level of 3,000+ dead, or billions of dollars of property damage across multiple states. But if Marvel continues to stick these stories in a title as accessible and everyman-relatable as Hawkeye, it makes the art of what they’re doing much easier to digest.