One of the first “Remembrance of Comics Past” posts I made on this blog was a story about a big box of comics I received from a friend of a friend that contained more than 100 issues of Amazing Spider-Man from the 1980s and 1990s. I’ve long credited this random act of kindness as being the one of the main reasons I’m even in any position today to own every single issue of ASM. 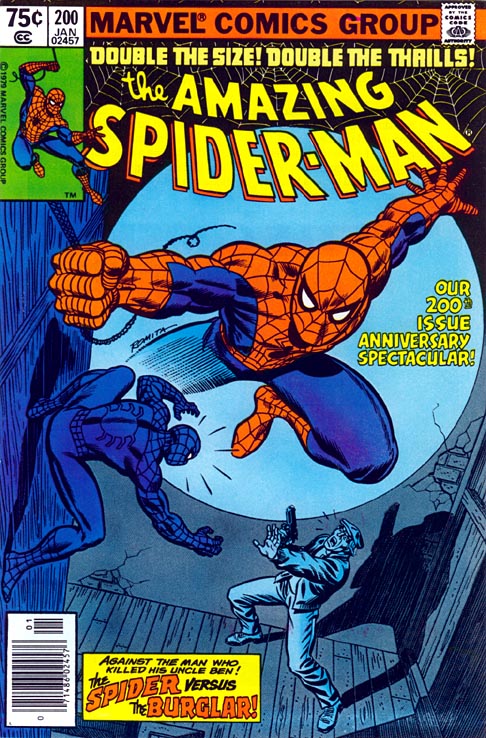 However, from a blogging perspective I’ve always been a little bit stuck on how to write about the comics I obtained in this box. My “remembrance” posts generally contain a little story about how I acquired said comic. Obviously in this case, I got all of these comics in one fell swoop. But I still have some interesting impressions, reactions and anecdotes relating to many of these comics. Some of them speak to me as a collector, and others as a writer and individual. So, since this is my own blog and I can make the rules up as I go along, I thought I would dedicate one post ever week for the next month or so to the comics in these box, and going forward, would categorize these stories under the umbrella “Big Box of Comics.”

Now on to a post about the first comic I grabbed out of that box, Amazing Spider-Man #200:

As a young writer, I was taught about the importance of language. There were writes who had a very strong grasp of it – how to use it, how to be playful with it, how to saturate our minds with it. These masters of language are the usual suspects, the Shakespeare’s, Twain’s the Fitzgerald’s and on and on. But in my years of reading comic books, I’ve certainly found a number of writers who were masterful with language – Neil Gaiman in Sandman, Art Spiegelman in Maus, Alan Moore in pretty much anything. All three are of course true writer’s writers. There are plenty of “less intellectual” writers out there – especially in the highly-commercial “big two” superhero genre where all issues of Spider-Man fall – that I enjoy plenty, even if the use of language isn’t all that slick.

But then there are moments, where even in my favorite comic book series of all-time, where the poor use of language just grinds things to a halt. That, unfortunately, has always been my take on ASM #200.

I understand that this issue is mostly viewed in a positive light. It marks ASM’s second centennial issue and Marvel spared no expense, bringing back Spider-Man’s original nemesis, the burglar who killed his Uncle Ben. The issue also expands upon Spidey’s origin story, first told in Amazing Fantasy #15, by providing more insight on the Burglar’s motivations during his robbery of Uncle Ben and Aunt May and ultimately giving final resolution to his biography by marking his death from a heart attack during battle with Spider-Man. 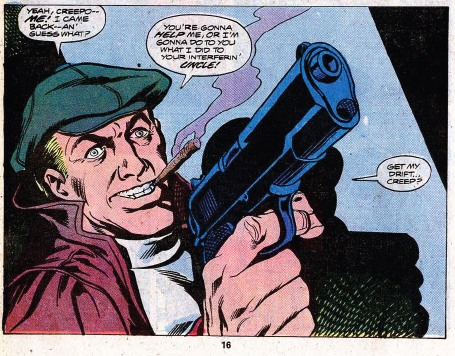 The problem with this issue is its difficult to get through a page without inevitably running into some incredibly ineloquent language – specifically the questionable overuse of the words “punk” and “creep” during Spidey/Burglar interactions. I understand that the writer here, Marv Wolfman, was just trying to establish that the Burglar was a lower-classed villain, but the frequency of these words make it read like they were attached with a rivet gun. I just can’t read through this comic without putting it down for a second to cringe and shake my head. It’s the English language equivalent of nails on a chalkboard. It bothers me that much.

I understand that this opinion makes me sound like some kind of cultural elitist – “it’s just a comic book, not Shakespeare” you’re probably thinking. But that’s why I prefaced this whole rant by mentioning that I don’t honestly expect a mainstream superhero comic like Spider-Man to read like Shakespeare. But it does need to reflect some kind of reality. I just don’t think people in the real world honestly talk like this and throw these words around that much. And what’s worse, you have Peter/Spider-Man speaking like this throughout in some kind of attempt to make his confrontation with the burglar seem that much more heated and emotionally charged. 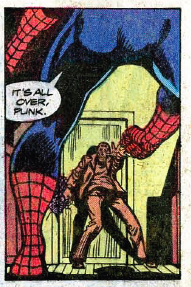 When I stop and think why the language used in this specific comic bothers me so much when compared to the 699 other issues of Amazing Spider-Man, it dawns on me that perhaps the reasoning is that comic’s various creative teams have not had much experience writing dialogue for brusque, low-brow characters like the Burglar. Peter is portrayed as a genius from the very first few pages of Amazing Fantasy, and even the characters who bully him, like Flash Thompson, come across more as smart alecks than crass, uneducated louts. Spidey’s gallery of rogues consists mostly of other scientists, wealthy industrialists and mad geniuses. The gangster-characters are typically intelligent leader-types and not petty thugs like the original Burglar. If you buy that logic, there’s at least some of the disconnect. That still doesn’t necessarily excuse it.

After hearing for months about Matt Fraction’s amazing work on Marvel Now’s Hawkeye series, I picked up a copy of Hawkeye #7, which, as a double bonus, benefits victims of Hurricane Sandy here in New York and New Jersey. In the first part of the story, Hawkeye is with a family in Far Rockaway, who were definitely depicted as old-school “blue collar” types. For all I know, the original Burglar could have lived in this neighborhood before he took on a life of petty crime-turned murder. At no point while reading the dialogue in Hawkeye did I question Fraction’s word choices. The characters felt authentically connected to their class and social standing. Wolfman’s Burglar reads like a Dick Tracy cartoon. It just gives more credence to my argument that Wolfman really missed the mark with the authenticity of the Burglar.

What’s ultimately the most disappointing with this whole scenario is it truly robs me of most of the enjoyment I should be deriving from this otherwise historic issue of ASM. When I discovered that ASM #200 was in this big box of comics, I was ecstatic. I had long wanted to read about the second full appearance of the Burglar and his eventual death. Spidey’s triumph over this villain, and his reuniting with Aunt May should feel epic and triumphant, until I read the word “creep” another dozen times. 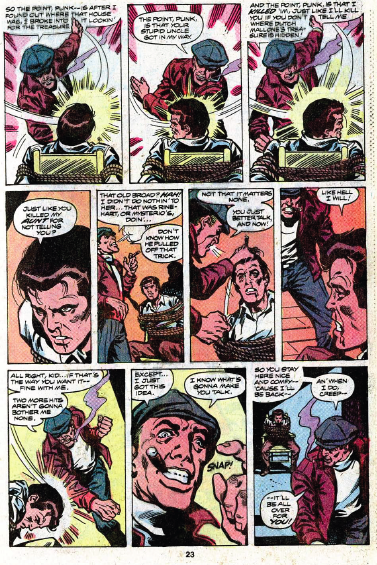 Maybe ASM #200 is here to teach me that regardless of the medium, I should never stop demanding excellence from my entertainment. It also confirms that despite some of my occasional disagreements with the plot and direction of Amazing Spider-Man, the title has always managed to maintain a certain level of literary quality – except in this one instance (and I’m sure a few others that I just can’t rattle off at the top of my head). There’s a part of me that’s always felt ashamed of my opinion of ASM #200, in large part because the issue seems so beloved. But that’s just another example of the unique and personal qualities of a comic book. One person’s classic, is another’s English language train wreck.