As we start week two of my top ten list, we reach the the first two entries of my final “special six.” I’ll admit I’m a bit shocked I haven’t heard much criticism of some of the issues I’ve been throwing out there – in fact I got quite a few thumbs up from fans on ASM #400 last Thursday. So maybe my tastes aren’t as off-the-reservation as I thought. Then again, I haven’t discussed issue #6 yet … until now: 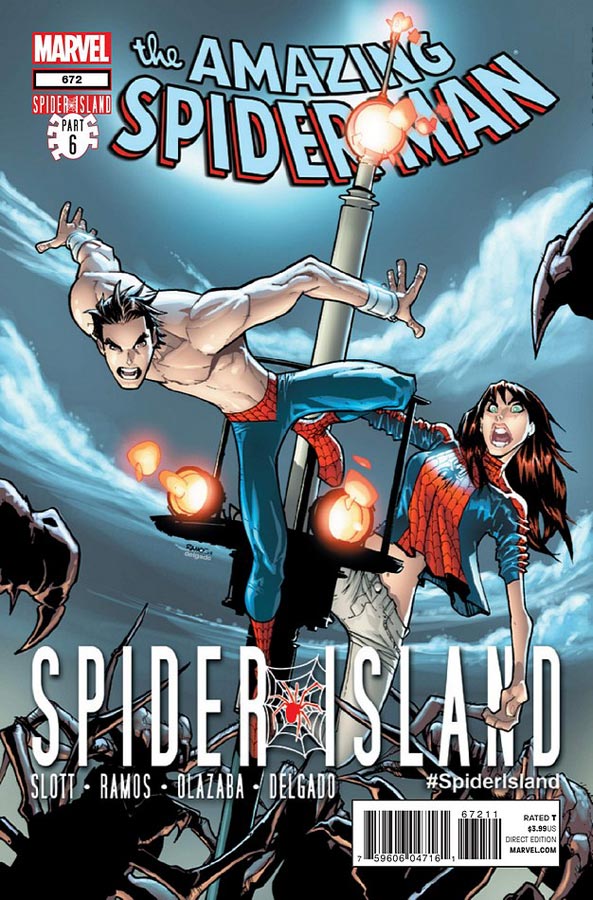 So I’m anticipating this is where I’m going to lose some people. I’ve just went ahead and ranked a comic book that was released in 2011 over a number of classics penned by such luminaries as Stan Lee, Roger Stern, Gerry Conway … the list goes on. And not only is this a relatively brand new issue listed in an all-time favorite compilation, but it was scribed by perhaps the most controversial ASM writer in the last 30 years in Dan Slott. Clearly I have lost my mind.

Well, I stand by it for a number of reasons, and I’ll go on to add that when Slott’s tenure as head Spidey writer eventually ends, ASM #672 will be viewed as the pinnacle issue by one of the character’s most unique and clever scribes. A lot of Slott has been hit or miss for me since this issue, but we’ll always have Spider Island to hold on to, and for that alone, I’ll always have a lot of reverence and respect for him (and no, I’m not just saying this because after meeting him at a signing last week he made me feel sheepish when he told me he reads the site, even though I criticize him).

The world of comic books is constantly defined by the next big “epic” event whether it’s a mega-crossover miniseries or a total relaunch of a publisher’s line. These events tend to be built up with uncanny amounts of hyperbole and the end result is a lukewarm product like last summer’s AvX, or 2011’s Fear Itself, which interestingly enough was running co-currently with Spider Island.

Spider Island was different. It was a hyped story arc that not only transpired within at least seven issues of ASM, but a ridiculous number of other titles, mini-series and one-shots, and the damn thing still delivered. The whole arc was aggressive, assertive and passionate. People who continue to doubt that Slott is the biggest Spider-Man fan in the world just because of his plot twist at the end of ASM #700 clearly are blocking out Spider Island from their memories. And that’s a terrible, terrible shame.

To quote Reggie Jackson, ASM #672 is the straw that stirs the drink, the issue that brings everything home for the arc. It pulls its source material from years worth of prior issues of ASM – the Clone Saga, the Other and ASM #600 to name a few –  along with Venom and all of the other minis and one-shots released during the arc. It ties all of these loose ends together while still moving like a rush-hour locomotive without ever going off its tracks. 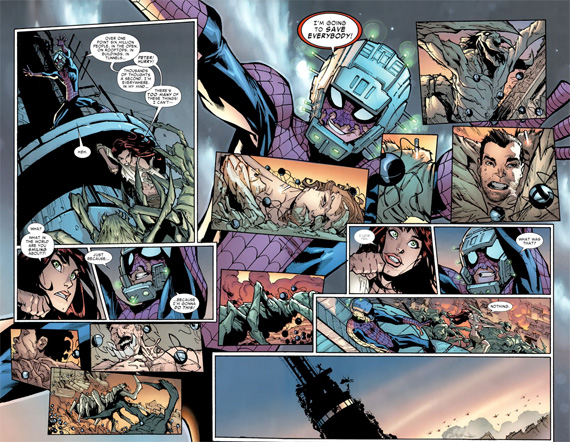 ASM #672 is a love song to Spider-Man. It’s everything I love about the character rolled into one $3.99 collection of paper. We have Spidey using his intellect and unstoppable spirit to overcome otherwise insurmountable odds. In this case, the Avengers and the rest of New York’s superheroes get to participate in the big Michael Bay-esque battle with the Spider Queen, while Peter takes on the real dirty work by having to come up with a way to save all of the regular folks of NYC who have been transformed into spider monsters.

Then, there’s Peter and Mary Jane showing both a romantic and sincerely platonic chemistry that had been lacking for years (I have to wager that their marriage would have never been dissolved in One More Day if previous writers captured the essence of Peter and MJ like Slott does in this issue).

And of course, because this is Spider-Man, and because there’s always that darn “Parker luck” to consider, we have Spidey at his most triumphant still being upstaged by other superheroes when New York City has been saved once again.

The last page gets me every time I see it: Peter and MJ sitting atop of the Empire State Building, looking proudly at the city they just saved. Peter jokes that the entire populous of New York has walked a mile in his shoes, but then MJ reminds him and all readers that it’s not Spider-Man who’s special, it’s Peter Parker. In an island filled with spider-powered individual, Peter is still amazing enough to be the true hero. 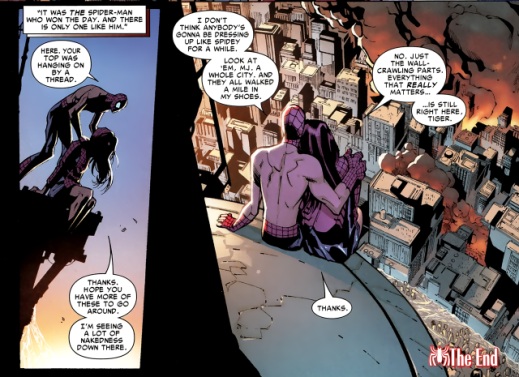 Don’t take my effusive praise of Slott as a slight to another key participant. Ramos is no slouch on this issue and throughout this entire arc. His artwork here is kinetic, in the most positive way possible, driving this complicated, mutli-faceted story along at its fast pace.

Together, Slott and Ramos created a work of fiction that made me smile from ear-to-ear the first time I read it. In a time with so much cynicism, ASM #672 brought me back to a simpler day, when reading comic books just made me happy. If you can’t appreciate what Slott did win this comic book, then quite frankly I question your passion and love for comic books and Spider-Man. 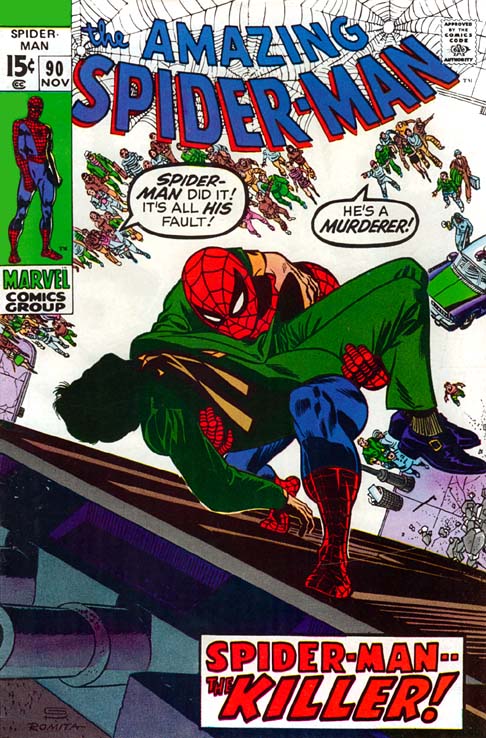 ASM #90 is the collaboration of three icons in Lee/Kane/Romita and is arguably the most meaningful and emotional story of the Stan Lee era. This issue, of course, marks the death of Captain George Stacy, the most significant character killed off in the Spidey universe since Peter Parker’s Uncle Ben was gunned down by a burglar in Amazing Fantasy #15. And much like Uncle Ben, Captain Stacy was portrayed as one of the most morally pure, well-meaning characters within a fictionalized version of New York City that had been overrun with criminals and costumed vigilantes.

What propels this issue into legendary status is the scene where Stacy dies. Naturally, he dies a hero, pushing a small boy out of the way of falling building rubble, which had been knocked to the ground by Doctor Octopus during battle with Spider-Man. Additionally, the scene resolves a lingering question for readers about Stacy’s intellect and perceptiveness. 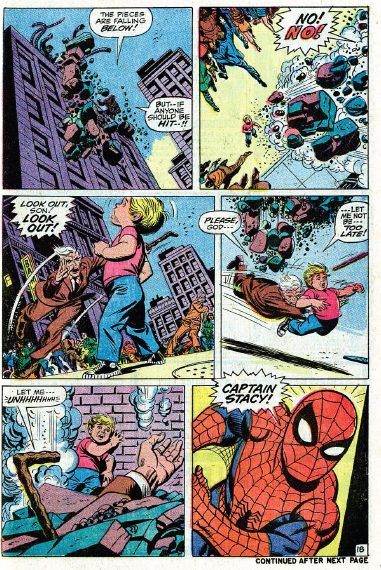 From his first appearance, Stacy took a special interest in Peter because of his relationship taking photos of the masked Spider-Man. While everyone else living in the ASM universe seemed to be completely ignorant of the fact that this one teenager kept getting exclusive photos of a masked vigilante, Stacy let-on that he knew something. He wanted to talk to Peter to find out everything he knew about Spider-Man. And unlike his colleagues in the New York Police Department, Captain Stacy believed that Spidey was misunderstood and was an asset to law enforcement.

But even with all of these hints and inferences, readers never got definitive evidence that Stacy knew Peter, the man who was dating his lovely daughter Gwen, was masquerading as Spider-Man … that is until Stacy’s final scene in ASM #90. As he laid in Spider-Man’s arms on the cusp of death, he asks “Peter” to please look out for his daughter Gwen. It’s an emotional sucker punch unlike anything else readers got from a Spider-Man comic since we found out that the burglar Parker let run by him out of spite and arrogance was the same one who killed his Uncle Ben. 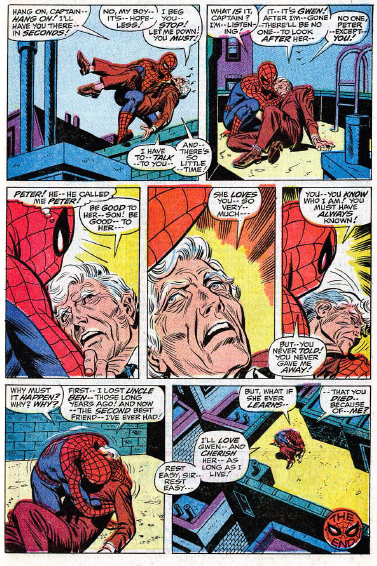 And yet, in many ways, Stacy’s death felt more catastrophic and melancholy than Ben’s. While Uncle Ben left Peter/Spider-Man with the mantra “with great power comes great responsibility,” readers seemingly understood from the beginning that his death was part of a origin story – something that would lay the foundation for larger things. There were plenty of other superheroes who became who they were because the death of significant people in their lives. prior to the existence of Peter Parker But Stacy’s death created a different dynamic. His death came directly from the failings of an established hero. And Stacy was the only character in the ASM universe that knew of Spider-Man’s secret identity and didn’t want to use against him to cause pain and torture. He respected Peter for his double-life, and wanted him to continue his life of masked heroism.

My reverence for this issue is also helped by the fact that this is one of those deaths that Marvel has never undone. Even Gwen came back as a clone after her death. But Stacy remains in the same class as Uncle Ben – characters that will never ever ever be revived. If I opened a comic book today and saw a living Captain Stacy in the present day, I would declare it one of the greatest travesties in the history of a medium that’s notorious for silly decisions. Fortunately, I can’t imagine a writer who would have the ignorance or gall to tackle this “what if.”

When I wrote a “remembrance” post about ASM #90, I questioned if I was born in the right era based on my emotional reaction and attachments to this issue. All of the Stacy’s were dead about 10 years before I was even born and yet these issues saddened me as if I was reading them in the present – completely ignorant to the fact that Peter would eventually find romantic happiness in the form of Mary Jane (for a little while at least). That speaks volumes to how well-crafted these characters were and how appropriately epic their ends were portrayed. Comic books have long been derided as an intellectually silly and frivolous medium. But I would wager that people who think this way never read ASM #90.