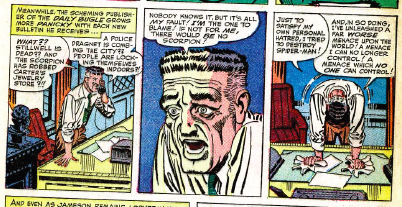 When it comes to J. Jonah Jameson, I’ve long debated the argument of whether or not he effectively crosses the line from “antagonist” to out-and-out villain. He’s certainly long been one of Spider-Man’s greatest adversaries over the history of the character, but a villain? Definitely not a villain in the fashion of a Doctor Octopus or a Green Goblin, as he wouldn’t stand much a fight one-on-one with Spidey, which is why I’ve always leaned more towards the “antagonist” argument. Then again, there are the events from ASM #20, which, when you think about it, are so outrageous and over-the-top, I’m glad Roger Stern had the wherewithal to address them more than 20 years later during the “Secrets” storyline starring Hobgoblin.

That’s because in ASM #20, Jameson goes from curiously to criminally obsessed with bringing down Spider-Man. In ASM’s previous 19-issues, Spidey was the focal point of a number of unfair front page exposes questioning his integrity and heroic nature. Jameson would constantly try to link Spidey with every new supervillain that popped up around the city – Electro, Mysterio, etc. Jameson’s obsession was cartoon-like – clearly a caricature of the “yellow journalism” days of Hearst – but nothing too insidious. In many ways, Jameson was no different than the rising number of blowhards who get paid to spout political nonsense of cable news networks today.

But by bankrolling Mac Gargan for an untested experiment that would transform the private investigator into a super-powered creature called the Scorpion, and to do so explicitly so Gargan could physically take down Spider-Man? That’s no longer comical. It’s the same kind of vigilante-rule that Jameson was constantly railing against. He was clearly unhappy with how the sanctioned forces of the law, namely the police, were dealing with the “threat” of Spider-Man. And depending on your interpretation of things, you could say that Jameson essentially bankrolled the attempted murder of Spider-Man. 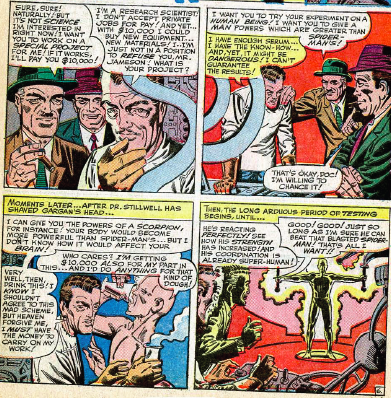 And that’s where the argument could be made that Jameson was more than just a blustery old coot who didn’t like Spider-Man and sent out to use the power of the press to make his life miserable. While he still lacked the offensive punch of some of Spidey’s other villains, how were Jameson’s actions any different than someone like the Kingpin, who chooses to do the bulk of his devious deeds from behind the scenes (though Kingpin is obviously an accomplished bruiser). Point being, despite the fact the Scorpion ultimately turned on Jonah and attacked him, forcing Spidey to save the day, Jameson’s hateful obsession with Spider-Man took a very dark turn in this issue, and I was always surprised that this scenario wasn’t regarded with more levity by ASM’s creative team. Instead Jameson is back at it a few issues later, hiring the Spider Slayers to take a crack and “capture” Spider-Man, but no one really addressed the fact that Jonah was directly responsible for giving birth to a psychotic super-powered villain in an effort to physically overpower and presumably kill Spider-Man.

That changed with Roger Stern. Under Stern, the Hobgoblin, who was clearly more dynamic than just another “goblin” character that became the norm in Spider-Man comics during the 90s and 2000s, was using the Scorpion incident in order to blackmail Jameson. And it was during this storyline where the reader finally sees that Jameson understands that his actions all those years (or issues in comic book speak) early, had truly negative consequences for this fictionalized universe. Jameson is so guilty, he eventually writes an editorial addressing the incident and resigns as editor of the Bugle (but remains publisher). 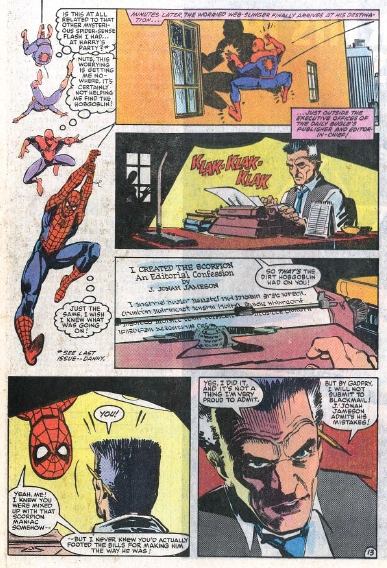 And yet, perhaps Jameson got off to easily. When Gargan later becomes bonded to the Venom symbiote, the deaths of countless others should hypothetically be on JJJ’s conscience. This point never really gets addressed in the comics (that I can recall – if this was brought up in one of the Dark Avengers mini-series, I missed it).

On a personal note, I prefer Jameson the antagonist to Jameson the borderline villain, primarily because it’s more believable, plus then you don’t have the “shades of grey” to contend with when you contemplate the blood that is potentially on Jameson’s hands for his Scorpion decision alone. There’s a part of me that believes in “real-life” if a Rupert Murdoch like figure was on the record in admitting he had publicly financed/backed a terrorist organization that not only would he be forced to resign his position, but he’d also be in jail (the phone-tapping scandal aside, which Murdoch has obviously denied being privy to). But beyond the real-world analogies, I also believe Jonah the antagonist makes scenarios, like the one from Avenging Spider-Man #3, seem more believable because even with his heightened sense of responsibility, Spider-Man is going to be more apt to rescue somebody he dislikes but is ultimately innocent, rather than someone who was directly responsible in attempting to kill him.