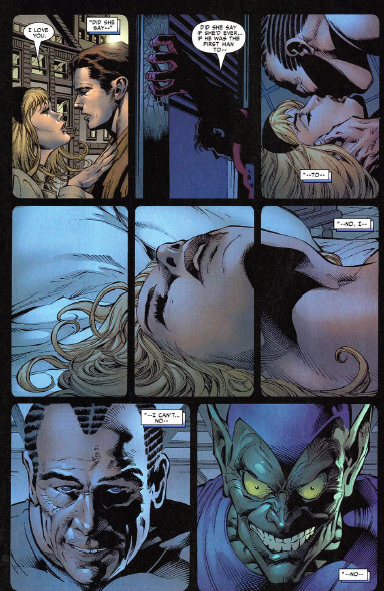 Unless your take on the world of comic books is even more myopic than my own, you probably heard last week that DC is controversially going to release prequels to the all-time great graphic novel Watchmen more than 20 years after the story was originally released and without any input from its original writer, the fantastic, if not mercurial, Alan Moore. While DC is obviously stacking the deck with worthwhile writers and artists to make this endeavor work (or at least sell), one of the names involved in this project that stood out to me was former Amazing Spider-Man writer J. Michael Straczynski. JMS also grabbed my attention recently when he engaged in a very public pissing contest with current Marvel editors Stephen Wacker and writer Mark Waid though Straczynski later backed off the charge that posting ASM’s sales numbers which demonstrate a steady decline since JMS left the title on acrimonious terms a few years ago, was in fact, NOT meant to be a subtle jab at Marvel. Okay then.

So, naturally, as segues go, the recent JMS-centric news cycle has got me thinking about his legacy with ASM and the only conclusion I can draw from this is Straczynski’s was one of the most inconsistent runs on Spider-Man you can ask for, filled with some of the best writing in the title’s history, and some of the most deplorable. JMS gets credit for resurrecting ASM after a very dark period for both the title and Marvel in general and a few months ago, I waxed poetic about how much I truly adored Straczynski’s initial five-issue arc on the title involved Spider Totem/Ezekial/Morlun. But for every great JMS storyline, there was one that was equally perplexing – “The Other” where Spider-Man “dies” and comes back more spider than man is a high-minded waste of time that reads like it was written on an acid trip, whereas JMS absolutely nailed the Peter Parker/Spider-Man component during the Civil War tie-in.

However, none of JMS’s storylines aggravate me more than the controversial “Sins Past”  (ASM #509-514), and that says a lot considering he was also one of the architects behind “One More Day” (though post-mortem interviews have shown that Marvel EIC Joe Quesada was more of the driving force behind that status quo upheaval). “Sins Past” epitomizes everything I hate about the comic book medium – shock value for shock value’s sake; altering history for altering history’s sake; and just flat-out lack of logic. And the fact that the frequent mention of Straczynski’s name has brought my mind to this storyline probably says it all in terms of how I ultimately view JMS’s work on the title.

If you’re unfamiliar with the storyline – and a part of me hopes that you are because it’s really that bad – in brief, Sin’s Past introduced the idea that Peter’s first love, Gwen Stacy had a secret affair with his arch-nemesis Norman Osborn/Green Goblin which produced twins, who had inherited Osborn’s Goblin-fied DNA and were raised by the mogul-turned-monster. The twins believe that Peter is their real father, so they set out to destroy him since they blamed him for Gwen’s death at the hands of the Green Goblin.

A good litmus test to determine the quality of an ASM storyline is to mention it to my wife, who is at most a very casual fan who also has a bit of a geek-streak in her. When tinkering with the idea of doing a post about Sins Past, I mentioned to her that I was going to write about the storyline where “the Green Goblin slept with Gwen Stacy and spawned two superpowered twins who wanted to kill Peter and his family.” This was followed by a “wait … what?” from my wife and then a litany of questions about how such a storyline was even remotely plausible. 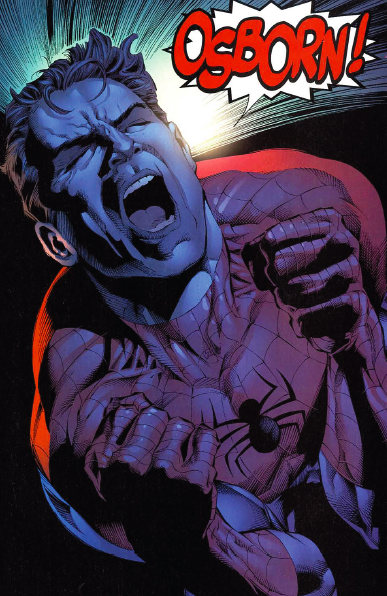 And while I could stand on a soapbox and talk about how this storyline essentially smeared the good name of a beloved character while rewriting the context of one of Marvel’s great storylines (because now, you see, Osborn had even more reason to kill Gwen in ASM #121 than just to get back at Peter/Spider-Man), what is ultimately so outrageously bad about Sins Past is the fact that illicit such a dumbfounded reaction from someone who knows Spider-Man fairly well, but never read the storyline explicitly.

There are just too many questions to consider here:

Why did Gwen sleep with Norman?

How did she hide her pregnancy from Peter?

How does Mary Jane know about this and NEVER tell her husband, who goes back and relives the death of Gwen probably every day of his life?

Even with Goblin DNA, how old can these kids possibly be in storyline terms?

How comes Norman never mentions his kids before when he talks about having no heirs beyond Harry?

Why would Marvel publish something that’s so skin-crawling gross?

Some of the questions get explanations, but hardly thorough, well-thought out ones. You see, Gwen slept with Norman because she felt “bad” for him – who cares about the fact that they establish that she’s a virgin here and she inexplicably chooses to lose her virginity to the creepy father of one of her best friends (Harry) while it was also established that she was deeply in love with Peter. Because that’s what “real” people do – they withhold sex from their significant others so they can cheat on them with old nasty businessmen without using any contraception. Got it.

And while JMS tries to explain away how Gwen hid the pregnancy by saying the bulk of this transpired while she was away from Peter in Europe for a few months, considering the fact that her twins have mutated DNA that is causing them to age at an aggressive pace, do you think that she was really going to be able to physically hide the fact that she was pregnant with twins even for a few months before she left for Europe? And the fact that Mary Jane never told Peter because she was “sworn to secrecy.” I should also add that Gwen and MJ were initially competing for Peter’s affections, so I can’t even fathom why Gwen would admit such a transgression to a romantic rival, but furthermore MJ was aware of the biggest secret Peter has – you’re telling me she couldn’t return the favor and say, “hey, by the way, your ex-girlfriend who you continue to put on a pedestal despite being married to me cheated on you with your arch-enemy.”

Beyond the massive storyline inconsistencies, there are just a lot of other elements of “Sins Past” which are obnoxiously awful. There’s Peter’s Streetcar-eqsue “OSBORN!!!” scream after learning the truth, which was obviously intended to ratchet up the blood-fued between Peter and Osborn and instead just comes across as trite. There’s Peter going back to the scene of Gwen Stacy’s death to confront the twins only for Gwen’s female daughter to take that inevitable fall off the top of the bridge (but Spidey saves the day this time, which I guess is supposed to vindicate him?). Then there’s Spider-Man, out of costume from the mask down, giving a blood transfusion to one of the twins because he too has “altered” DNA (who cares about the fact that Spider-Man has superpowered blood from being bitten by a radioactive spider, and Osborn’s blood is tainted by a serum he developed – it’s NOT the same thing, sorry). 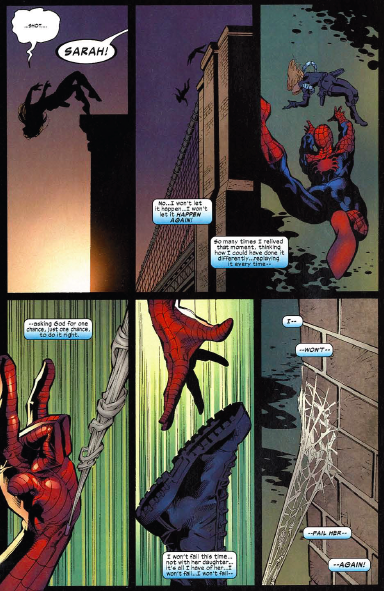 Which brings me to the last question asked by my litmus test wife: why did Marvel do this? What purpose did this storyline serve? Based on the fact that this storyline has not been touched in years indicates that Marvel’s creative team doesn’t want to go near this mess with 10-foot-pole. So if they weren’t planning on mining a whole slew of storylines based on the fact that Peter’s romantic past has been irreversibly altered, why go through with Sins Past in the first place? Why piss all over Gwen Stacy’s grave and create two new supervillains in the process and then never bring them back into the picture?

JMS has apparently gone on the record since leaving Marvel and said he would have done Sins Past differently, with the kids being Peter’s and not Osborn’s – but that idea was vetoed by the higher ups since it would have “aged” Peter (and honestly, would Peter having secret love-children be any different than your standard episode of Jerry Springer?). Then when JMS got slammed for his participation in “One More Day” he mentioned that at the very least, the status quo change would undo the events of Sins Past. But I’m just not buying it. If his work on ASM was good enough for him to recently taunt Marvel by showing sales figures during his run, how does JMS get to separate himself from some of the more controversial/despised storylines during his time on the title? Just as he’s currently doing with Before Watchmen, JMS always seems to find himself in a controversial situation, yet he arms himself with a litany of excuses as to why he’s not the bad guy.

The fact remains that Sins Past is just a giant stain on the history of Amazing Spider-Man, whether or not Marvel considers it a part of its current continuity. Compare it to the Clone Saga, which was also considered an artistic disaster, yet to Marvel’s credit, they’re at least still trying to make something successful out of it with the well-reviewed Scarlet Spider series. Yet Sins Past has remained firmly in the “mistake” pile.

JMS has a ton of amazing credits on his profile, most notably Babylon Five, and a part of me thinks that his work on Before Watchmen could be an interesting read. But, considering this is an ASM blog, I’m going to ultimately judge the man on his work for my favorite comic book series of all-time. As the old sports adage goes, sometimes you just have a “bad game” but when you have a **** up on your resume that’s as colossal and disgusting as Sins Past, that’s unfortunately the way you’re inevitably going to be judged. How this guy continues to get work based on his reputation from a television series from years ago, when his most recent work is so reviled, is beyond me